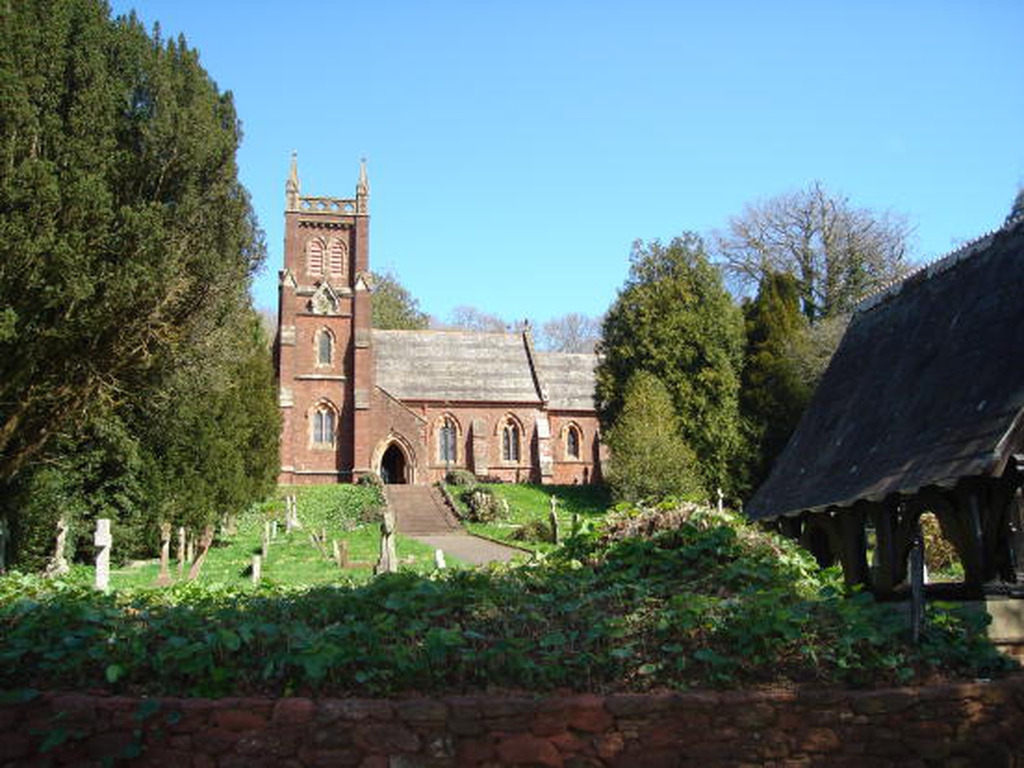 For any information relating to Collaton St Mary Church, please telephone 01803 843797. Information about the services, and contact details, are available on the button above page.

The church was built at a time when the fashion in church circles was for buildings which looked as if they had been built six hundred years or more earlier. The pointed Gothic of the window tracery, the soaring chancel arch and high roof are typical of the mid nineteenth century. Collaton has kept most of its Victorian furnishings as well as its exterior fabric to speak of the religious fervour of the 1860s. Perhaps this has been due to the longevity of its Vicars, particularly the late Sidney Stevens, who clung to the fashions of his youngest memories - the "Golden Years" at the end of Queen Victoria’s reign. He died, still serving as the Parish’s Vicar, aged ninety-four in 1982. Nowadays fashion has come a full circle and things Victorian are often greatly prized.

The building is of local red sandstone from Clennon quarry, with the ornamental embellishments and the window tracery of Bath stone.

The church was built by the Rev Mr & Mrs J R Hogg, who owned the Blagdon Barton estate and who also gave the land for and built the Vicarage and the school.

The whole complex of buildings was erected in memory of their daughter Mary, who died on January 26th 1864. Mary had always said that she wanted to build a church when she grew up, so when she died in her 'teens, her parents built our church in her memory. Their grave can be seen near the East End of the church, on the South side, in the churchyard. Mary Hogg was the grandaughter of the Rev H F Lyte, the hymn writer who composed "Abide with me", "Praise my soul the King of Heaven" and "Pleasant are thy courts above", who lived at Berry Head, Brixham. Mary’s mother was Mr Lyte’s daughter. Though Mary died only at the beginning of 1864, the church was completed and consecrated on Lady Day (March 25th) 1866 by Bishop Spencer of Jamaica and Newfoundland.

In the churchyard adjacent to the South wall of the church lie the remains of the builders of the church, their daughter Mary, Bishop Spencer, the Rev Peter Lilly, the first Vicar of the parish and former Vicars Hugh Pinchin, William Mills and Sidney Stevens.

Many friends would have liked to help build the church but the Hoggs wished to erect the building unaided. Once the church was built however, their friends helped them to beautify and enrich it. The tower, font and it’s cover and the pulpit were given by their friends.

In 1867 Mr Hogg also died and the East end of the church is a memorial to him. His widow gave the East window with its three lights portraying Christ carrying the cross, Christ on the cross and St John with the Blessed Virgin Mary. The reredos was erected in his memory by his many friends. It is carved in Caen stone and the design is based on Leonardo da Vinci’s painting of the Last Supper. The carving was carried out by Mr Phyffers of Teignmouth and the figures seem full of life. St. John is leaning forward to hear Jesus’ words; St James (to the right) shows the attention and devotion of one who first laid down his life for his master; and Judas Iscariot, clutching the money bag is to the front of the carving contemplating the betrayal.

The font is of English alabaster, decorated and inlaid with Italian marble and Venetian gold mosaics. The four figures around the font are of Saint John Baptist, Saint Peter, Saint Stephen and Saint Paul. The elaborate canopied cover is of English oak and Italian walnut and is raised on a counter balance.

The pulpit is of Portland stone, with marble pillars. The west windows portray Samuel & David; Saint Peter & Simeon and are a memorial to the first Vicar, Peter Lilly.

The memorial window of the much loved Sidney Stevens, showing Saint Francis and the Good Shepherd was dedicated by the Bishop of Plymouth on November 14th, 1983.

History of the Church kindly supplied by Anita Felce

"The church of St Mary the Virgin, built in 1864-1866, is an edifice of red sand-stone, with Bath stone dressings, in the Early decorated style, and consists of chancel, nave, south porch and a tower at the south-western angle of the nave containing a clock and 5 bells: the stained east window is a memorial to the Rev J R Hogg, and was erected by his widow: the reredos of Caen stone represents the Last Supper: there is a bronze tablet containing the names of the seven men of the Parish who fell in the Great War, 1914-1918; it was erected in 1920 by public subscription: there are 160 sittings. The church yard is entered by a lych-gate, erected by William Gibbs esq. The register dates from the year 1864. The living is a vicarage, net yearly value 305, with residence, in the gift of trustees, and held since 1933 by the Rev William Robert Dunstan Mills BA of St Chad's College Durham."

Vicars of the Parish

The Collaton Bells were presented by Mr William Whitley of Barton Pines in memory of his brother Mr Charles Whitley, his two brothers-in-law Captain Neil Whitehead and Mr Hugh Whitehead and his chauffeur Mr Trevenor.

The church bells are rung on a regular basis by a team of six bellringers. The Tower is affiliated to the Guild of Devonshire Ringers.