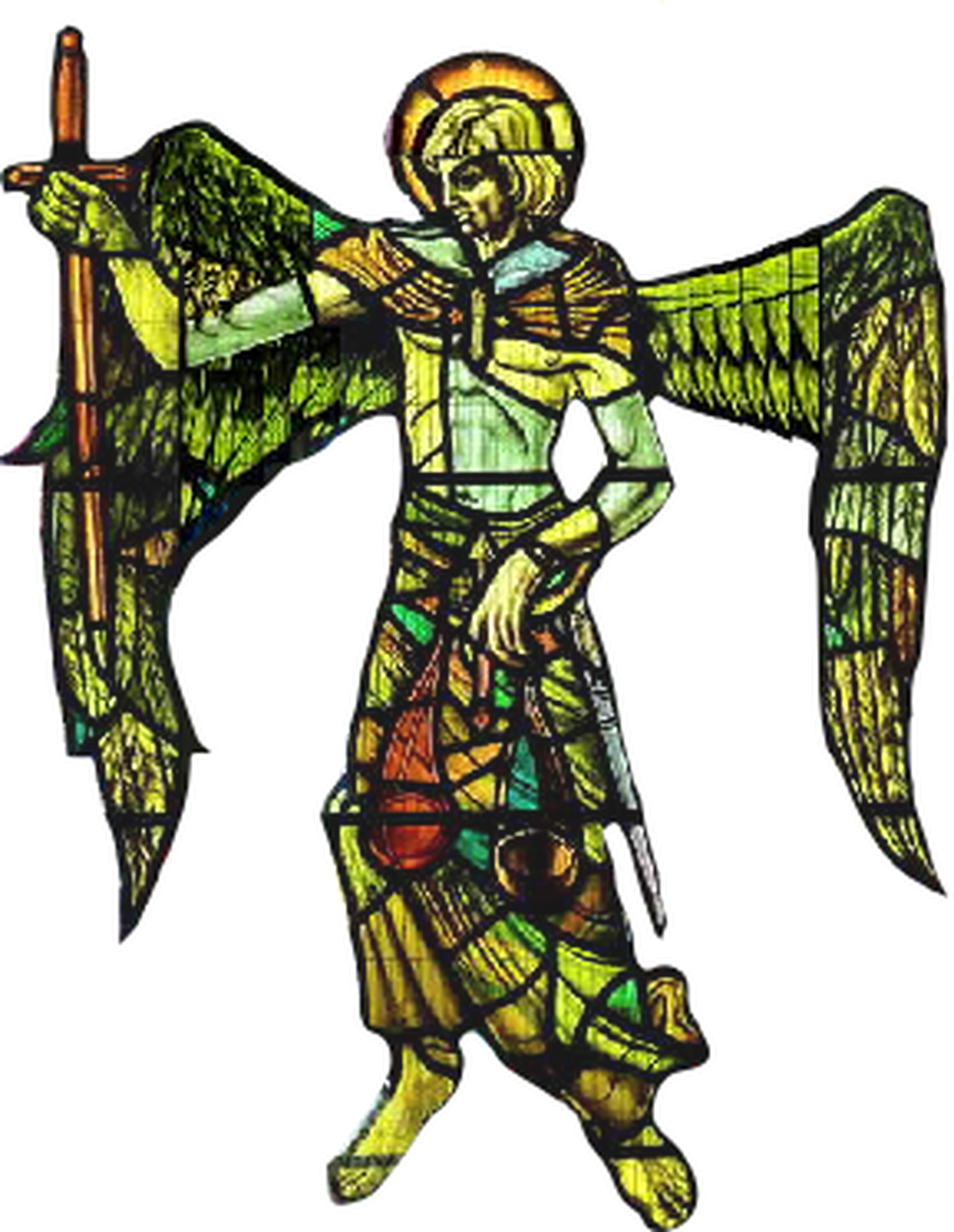 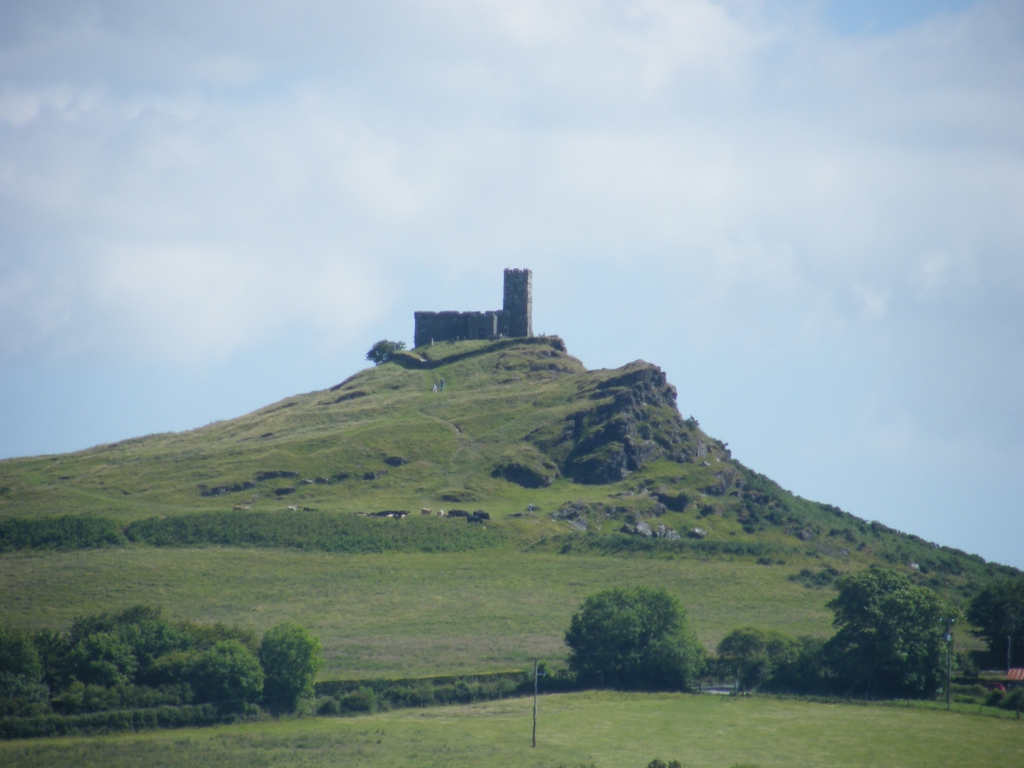 The Church of St. Michael de Rupe (St. Michael of the Rock), Brentor, is perhaps the most striking English example of a church on a height. There is a magnificent view from the churchyard in clear weather, with majestic Dartmoor rising to the east, Plymouth Sound and Whitsand Bay to the south, the Tamar Valley and Bodmin Moor to the west, and the heights of Exmoor just visible in clear weather to the north. Even when the thick moorland fogs descend, this is an eerily beautiful place, as the wind whips shreds of cloud past the hill. The church stands 1,110 feet above sea level on an extinct volcanic cone, a site which has attracted people for millennia.

History The Church and Furnishings The Present, and Into the Future

History:
Brent Tor was inhabited in the later Iron Age, as the earthwork fortifications around the base attest (dating from approx 150-50BC). These ramparts are not complete, and do not extend round the precipitous west side of the Tor. There is some debate as to whether the ramparts continued to the south, as the original scarping has been overlaid in recent centuries with agricultural hedges and a small manganese mine. The ramparts are also known to have been heavily robbed in the early 1900s for the purpose of building and stabilising the path up the Tor to St Michael's.

Christianity came to West Devon in the 6th century, shortly after the Roman departure - St Petroc is known to have founded the church in neighbouring Lydford in the late 500s or early 600s. However, the first church on Brentor was built by Robert Giffard in about the year 1130. The Giffards were an important aristocratic family in the area – Robert’s father had come over to England with William the Conqueror, and been granted estates in West Devon. There is also a tradition that the church was erected by a wealthy merchant who vowed, in the midst of a tremendous storm at sea, that if he escaped in safety he would build a church on the highest land he could see. This “merchant” has been named by other sources as Robert Giffard, and it is probable that when visible, it is the highest land visible from the Sound!

The next reference to the church comes in a Papal Bull issued by Pope Celestine III in 1193, as Sancti Michaelis de Rupe, at which time he exempted the Abbot of Tavistock from interference by the Bishop of Exeter (who had been in dispute) – or any other person. At the time, Brentor had two priests and a clerk, and this original church, probably smaller than the current one, was designed as a chantry chapel, a place from which priests would pray for the souls of the dead. This original chapel was rebuilt and enlarged in the early 14th Century. At some point, forty people were buried beneath the granite floor of the church. The great Abbey of Tavistock continued to serve the church unti 1539 when Henry VIII dissolved the monasteries. The patronage of Brentor then passed to John, Lord Russell, who was made Earl of Bedford in 1550. The Fifth Earl, William, was raised to a Dukedom in 1694, and the Dukes of Bedford remained patrons of the church until it passed to the Bishops of Exeter in 1912. The church underwent a major restoration in 1890, with the roof being replaced.

“I catechise ye youth of my parish in ye summer season two or three times, which is as often as they are sent for that purpose.” - John Tyndall, curate of Brent Tor, 1764

“Brent Tarr is a church on a very High hill I believe nearest heaven of any church in England; the people are very rude and brutish”. [This is a reference to the Gubbins, an extensive intermarried family who seem to have lived in caves in Lydford Gorge, nearby, and had a most barbarous reputation, including theft and even cannibalism! - Dr James Younge, Devon diarist, c. 1680

“Ye churchyard is so full of springs yet whenever they dig a grave it almost fills with water”
- Jeremiah Milles, Precentor (and later Dean) of Exeter Cathedral, c.1750

“It has been shrewdly said of the inhabitants of this parish, that they make weekly atonement for their sins: For they can never go to church without the previous penance of climbing up this steep, which they are so often obliged to attempt with the weariest industry, and in the lowliest attitude. In windy or rainy weather, the worthy pastor himself is frequently obliged to humble himself upon all fours, preparatory to his being exalted in the pulpit.” - Richard Polwhele, History of Devonshire, 1806

The Church and Furnishings:
The church is thirty-seven feet (11.3m) long, and fourteen feet six inches (4.4m) wide; it is the fourth smallest complete parish church in England. It consists of a nave, chancel (not developed), north porch, and a low, unbuttressed tower thirty two feet (9.8m) high, probably built in the fourteenth century and raised to its present height and embattled a century later - as a concession to the driving rain, the tower is designed and equipped with drainage holes to prevent water building up! There is a perplexing straight joint near the centre of the east wall, which may reflect the enlargement in the 1300s from a simple chantry chapel to a parishional church. The south window, appears to be 12th century work, but the north is more suggestive of the 13th.

There are doorways in both north and south walls, which is unusual in so small a building, although the porch is slightly more recent. They are similar in design and are probably fourteenth century.

The stained glass window in the east wall depicts St. Michael holding the sword of and the scales of justice, and was designed and made by James Paterson of Bideford and installed in 1971. This window was damaged in 2002, but has since been restored. In 1995 the church was struck by lightning, and significant damage was done to the Tower. This was repaired, and four new lightning conductors installed to prevent future recurrence.

The roof is a simple framed rafter construction, and although replaced in 1889, is believed to be a faithful copy of the the fifteenth cenury roof it replaced.

The font is an octagonal granite basin standing on a pedestal of the same shape. The remains of the iron fastening for securing the cover may be seen in the rim of the bowl. In the Middle Ages fonts were ordered to be kept locked in case the hallowed water was stolen and used for black magic! The font is the only furnishing of the church that dates from before the restoration of 1890.

There are five bells in the tower, two from the fourteenth or fifteenth century, one seventeenth and two from the early twentieth century; although all were re-cast in 1909. Two bear the medieval inscription Gallus vocor ego, solus per omne sono (I am called the cock, and I alone sound above all); and two “TPI Colling W Nichol H Davis Wardens 1668”. The heaviest of them only weighs six hundredweight (305kg). They were rehung and rededicated in 2013, and are rung for divine service, events of life (weddings especially!), and national occasions (such as coronations, and the 2000 millenium).

There is a stone sundial on the south side of the tower, one of the oldest in south Devon. At the top of the dial is a strange figure, half imp, half angel, wearing a flat cap and with outstretched wings. The name Walter Batten is at the foot of the dial, which is dated 1694.

The churchyard has never been closed for burials, but owing to a lack of earth and the presence of rabbits it is considered by modern standards unsuitable as a burial ground. A granite path was made around the church in 1980 with the assistance of the Dartmoor National Park Authority.

The Present, and Into the Future:

Evensong is held at 6.00 at St Michael’s every Sunday from Easter to Michaelmas, and on Christmas Day, there is a very special carol service at St Michael’s at 3pm. However, the church is open 24/7, 365 days of the year, and receives thousands of visitors each year.

As is common with such an old building, constant maintenance work is required - we are currently working to raise the money to rebuild the roof, the lead of which is insufficient to survive its exposed location and needs replacing with heavier material! However, we have no plans otherwise to change the building, simply to maintain it for future generations to worship in and wonder at.