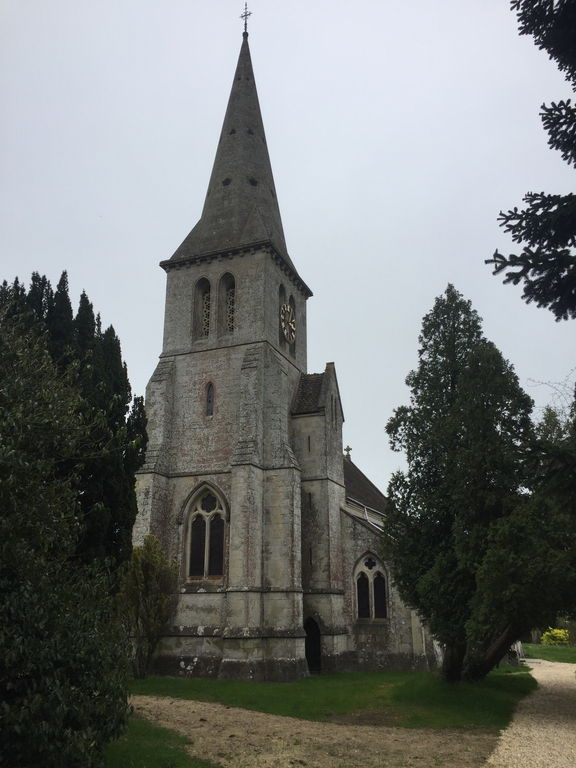 Milton-on-Stour: St Simon & St Jude
Services and events
News and notices
About us
History of Milton Church
Milton-on-Stour War Memorial
Safeguarding
Who's who
Find us
B3092 Gillingham
Get in touch
(01747) 821598
Facilities
More information
Edit this Church
Church of England Diocese of Salisbury Milton

A Parliamentary Commission of 1650 states there was "a chapel now decayed and not used a mile distant from Gillingham fit to be made a parish church for Milton and Preston." However, it was not until the mid nineteenth century that the Rev. Henry Deane, the longstanding Vicar of Gillingham, having redesigned and restored Gillingham Church was able to turn his attention to the lack of facilities in Milton. In 1865 he persuaded Mr Thomas Matthews of Milton Lodge to donate some land and a considerable sum of money in order to build the present church - which only officially attained the status of a separate parish from Gillingham in the early years of the twenty first century!

The Church is built of local Tisbury Stone in the style of the mid 13th Century. The total building cost was in excess of £2 500, over half of which was provided by the Matthews family, the remainder by public subscription.

As the visitor enters the church there are two main impressions to be gained - that of the loftiness of the building and also of the preponderance of stained glass windows. In fact all the windows with the exception of those in the organ vestry are of stained and painted glass. This gives subdued light on dull days but is well compensated for on sunny days when a myriad of colours dapple the church and congregation. The windows around the aisles depict saints and apostles in designs appropriate to the style of the building. Those in the apse show, in the centre, a scene of the crucifixion, on the right the Last Supper, and on the left Christ blessing the little children.

Other windows depict various biblical scenes and many are dedicated to various benefactors. Worthy of note is a window in the north west corner. The memorial is rather inaccessible and difficult to read. It is dedicated as follows:-

"To the Glory of God and in memory of John Phillips Esq., Late of Charnage Mere Wilts who entered rest 19th Dec 1881. Amongst other charitable bequests he left to the vicar and churchwardens of Milton in trust to be invested in consols £200 for the general purposes and benefit of the Sunday School attached to this church, and £300 for the purchase of blankets to be distributed amongst the poor inhabitants on St. Thomas' Day in each year."

The seats in the centre of the nave were supplied by Messrs. Slater and Carpenter of London, the carving, which on each is of a different design, was done by Mr Whitehead of London. The whole of the remainder of the building was completed by local craftsmen - Mr E. Churchill did the roofing, Mr A. Meade of Gillingham the general masonry and Mr C. Lydford provided the seats at the rear of the nave and the doors. The ironwork was crafted by the local blacksmith at Milton Forge.

Most ancient churches have been added to or altered during the years, and in this respect Milton although comparatively young is no exception. A quote from the Parish Magazine for 1887 is as follows:-

"The old pulpit was a very poor and ill designed one unworthy of the beautiful church and also falling into disrepair . In its place has been erected a very costly and handsome one after designs by the well known architect Mr. A. Blomfield, and much resembles that of the same architect at St. Georges Cannes the memorial church of the late Duke of Albany. The sides are formed by a series of small arches the pillars of which are of green Irish marble and contrast with the deep red panels of Perthshire stone."

Other additions and replacements include:

1891 - the organ replacing one given by the Rev. Henry Deane, 1892 - the spire was added to the tower, 1908 - the church clock was installed in the tower, Victorian wall murals were unfortunately painted over during the first half of the twentieth century, 1887 and 1955 - the churchyard was dedicated and extended, 1988 - the lych gate was built in memory of Mrs. Ina Matthews.

I have outlined here some of the main features and characteristics of our church. It is by no means a comprehensive inventory of all fixtures and fittings. I will leave opportunity for the visitor to explore and discover whatever captures the attention.