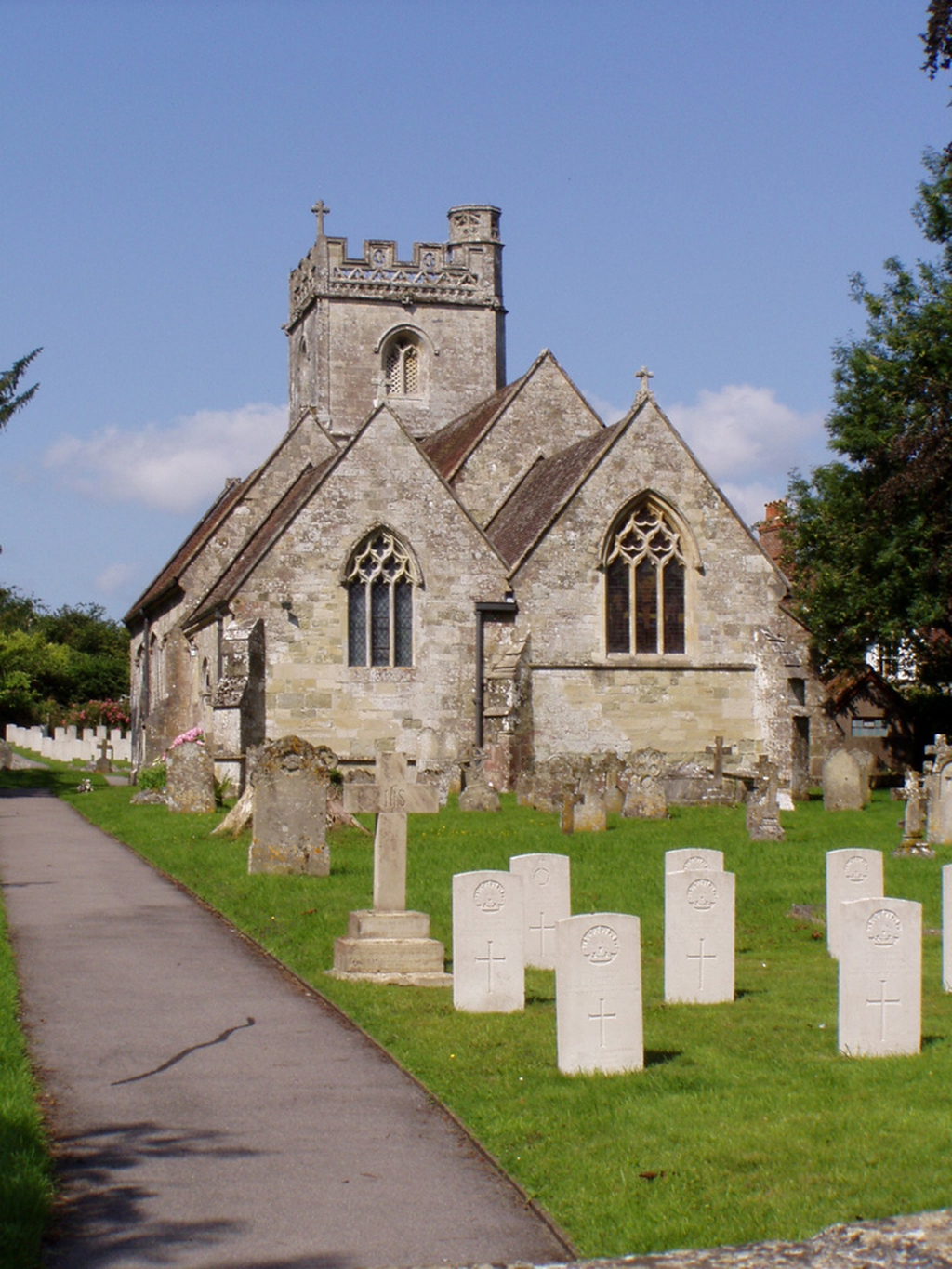 Perhaps the most important feature of Fovant Parish Church is not its architecture, interesting though that is, but simply that it stands here as witness to over a thousand years of Christian worship and prayer in this place.

We don't know when Christianity first came to this valley.  We do know that the Fovant area has been inhabited from prehistoric times (2000 BC) and the flint implements from the early Neolithic people can still be found in the fields.  The present village in the valley probably dates from the settlement by pagan Saxons after the battle of Old Sarum in 552 AD.

The earliest historic record is of the Anglo-Saxon King Edward making a grant of land at FOBBEFUNTE (the Fountain or Stream of Fobba) in 901 AD to his faithful minister Wihbrord.  It is likely therefore that at this time there was a Saxon wooden church on or near the site of the present Church, but no evidence now remains.

The Convent at Wilton, which became the richest in England, is recorded as the owner of FOBBEFONT in William the Conqueror's Domesday Book of 1085 AD.  The present Church is based on a Norman structure.  Some remains of this Norman building still exist, but the Church was altered and extended in the late fifteenth century.  Wilton Convent retained the patronage until the dissolution of the monasteries by Henry VIII in 1539, when the last Abbess, Cicely Bodenham, was exceptionally permitted to bring 31 of her nuns to live in the Manor House with  lands at Fovant adjacent to the Church.   The greater part of the Convent's estates, including, a few years later, those at Fovant, passed into the ownership of the earls of Pembroke, who built Wilton House on the site of the Convent. The village of Fovant remained part of the Pembroke estates, with the Advowson, or right of presentation, vested in the Earls of Pembroke, until 1919, when the Fovant properties were split up and sold.  Soon after the Advowson of the Church passed into other hands.

In 1863 the Church was again extensively altered, particularly the interior, under the direction of Thomas Henry Wyatt, who was then the consultant architect for churches in the Salisbury diocese - (Thomas Henry Wyatt was a distant cousin of the more famous James Wyatt who had made extensive alterations to Salisbury Cathedral in the late eighteenth century).

The Church has not always been distant from the main body of the village.  When the Church was built it would have been near the centre of the village settlement as it was then, but many of the nearby dwellings, of which there are still traces in the surrounding fields, were abandoned in medieval times, probably due to one of the periodic outbreaks of plague, such as the Black Death.

The Churchyard is maintained by a monthly work party of volunteers. A Burial Plan of the graves is available for viewing in the Church. Apart from the graves of Fovant residents there are a number of war graves. There are a number of war graves in the churchyard.  Many of them date from the 1914 - 1918 war, when there was a very large training camp and military hospital below the Fovant downs.  The Regimental Badges cut in the chalk on the hillside by the troops are a reminder of those days.  A branch railway line was built to bring troops from the South coast ports to the camp and hospital.  Sadly many of the wounded died and there were also a number of victims of the 1919 flu epidemic. Those from Britain are buried in their home towns and villages but soldiers from Australia and Canada, were buried in this, or neighbouring churchyards with gravestones from the Commonwealth Graves Commission, which also erected the large Memorial Cross  to those who died in the war. The men of Fovant have their own War Memorial in the village.

The Church, which is dedicated to Saint George, is built of the local Chilmark stone (as is  Salisbury Cathedral).  The exterior is in the Perpendicular Style and largely dates from the fifteenth century changes when the Tower and South Aisle were added.  The most important Monument in the Church is a small monumental brass on the North wall of the chancel which records that George Rede, Rector of Fovant, was responsible for the building of the tower in 1492.  It is notable that it is in English.  A copy is available for rubbing.

The decorative open work frieze, at the top of the Tower and the higher polygonal stair turret are a particularly fine example of late perpendicular stonework and have retained their original design despite repairs.  (The  battlements having been seriously damaged by the hurricane-force winds that swept across the South of England in October 1987, parts of the frieze were replaced by Salisbury Cathedral stonemasons, still using Chilmark stone.  At the same time a new cross was carved to replace the original cross on a corner of the tower which had been removed some time previously as being a danger having eroded beyond repair).

The carved Doorway in the exterior of the South wall is not original.  It was partly made from fragments of a Norman doorway which were found when Wyatt was repairing and restoring the Church in 1863.  Wyatt also added the South Porch and reconstructed many of the roofs.

Inside the Church the present Chancel layout and general appearance also date from this time.  The four pointed arches springing from round columns which separate the North Aisle from the Nave are the principal feature remaining from the original Norman church.  The South Aisle is said by the seventeenth century Wiltshire historian, John Aubrey, to have been added in the sixteenth century by the Prioress, Cicely Bodenham.  At the East end of the aisle there was originally a Chantry Chapel separated from the aisle by a wall.  By the early nineteenth century the chapel was being used as a schoolroom and in the 1863 alterations Wyatt removed the wall and this part of the East end became the Vestry.

The Chancel was completely rebuilt by Wyatt who replaced the chancel Arch, but the supporting corbels are the original early English ones.  The doorway opening on the South side of the arch once led to a stairway to the Rood loft, or gallery for musicians, which Wyatt had pulled down. The choir stalls were given in memory of John Maitland Shorland, Rector of Fovant 1890-1898.

The Roofs of the Nave and Chancel are waggon headed and were originally painted blue.  Carved wooden bosses on the nave roof, some medieval, but most Victorian, had to be removed in 1988 when they became unsafe.

The tracery of the West Window in the tower, which depicts the four Evangelists, is typical of late perpendicular style. This window was taken down in 2008 and repaired in the Cathedral workshops. The stonework of the other windows has mostly been renewed, but the two in the South Aisle, with their flat tops, may be early sixteenth century.  The East Window is a memorial given by the widow of Sidney, first Baron Herbert of Lea, a prominent statesman who was son of the 11th Earl of Pembroke and died in 1861.

The wooden Screen between the nave and the Tower is a good example of Early English work.  Although there are now six Bells there were only three in 1553, of which one remains.  A bell from 1623 was recast in 1863 and three date from after Wyatt's restoration.  The sixth was given by Miss Hanham, a former headmistress of the village school, in 1980 when the other bells were retuned and rehung.  The Font (behind the screen at the foot of the Tower) is Victorian.

The Eagle Lectern and Litany Desk were placed in the Church in 1923 in memory of the 63 British and Australian soldiers who died in the Fovant Camp Hospital and were buried in the Churchyard during the 1914 - 1918 war. The banner of Saint George behind the pulpit was extensively restored in 2008.

Saint George’s Church strives to be an Inclusive Parish where all are welcome to worship and take a full part in Parish life.  We reject prejudice which hides the truth of God’s redeeming love for all creation. Every human being is created by God, every human being is entitled to dignity as part of God’s creation and all are entitled to worship God and serve God through his Church.

We reject all discrimination and poor treatment on the grounds of gender, age, disability, community or denominational background, race, national identity, political opinion, cultural identity, sexual orientation or identity, gender reassignment, marital or civil partnership status or having or not having dependents.  In particular we regard none of these grounds as reasonable ones for refusing people full participation in parish life or full access to the Sacraments of the Church.

Fovant Church has seen many changes over the centuries.  Will you help us to pass on this great heritage and keep it as a centre of worship here in Fovant?  The cost of its upkeep now falls on this small community and mainly on the members of the Church.  We would be grateful for any donation you can make.