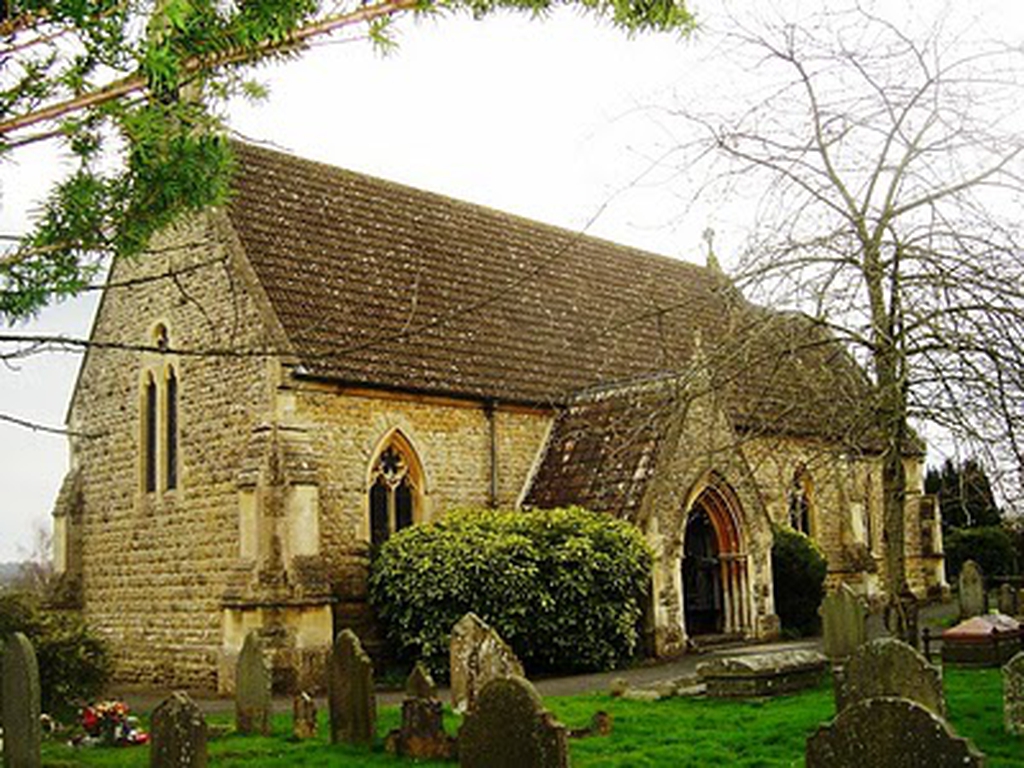 Calne: Holy Trinity
Services and events
News and notices
About us
Find us
London Road Calne
Get in touch
(01249) 812340
Facilities
More information
Edit this church

This is a truly delightful church set behind three rows of lime trees just off the A4, to the east of Calne.

Holy Trinity was built in 1852-3 to meet the needs of the growing community of Quemerford and to act as the Chapel of ease for a new churchyard for the parish, because St Mary's churchyard had become overfull. The building cost was met by the then vicar of Calne, Canon John Guthrie, largely at his own expense, the land having been donated by Lord Lansdown.

A chalice and a paten both hallmarked 1866 were given to the church by J R A Chinnery-Haldane, the assistant curate appointed to serve Holy Trinity by the vicar of Calne, and they are still used today. In 1864 morning and afternoon services were held in Holy Trinity church. In 1870 holy communion was celebrated monthly.

The church was designed by C.H.Gabriel and is tall, of coursed rubble and in the Decorated style. It has a west bell cote and spirelet and consists of  a chancel with north vestry and a nave with south porch.  The chancel is long, has tall south windows and diapering in relief on the sanctuary's walls and is separated from the vestry by a traceried screen.  The chancel arch is high and wide, and the nave has an open timber roof with cusped trusses and windbracing. There is a boiler room, which is no longer used, entered from the north side of the ch urch. Heating being now by electric radiant heaters. There is a separate coursed rubble shed for the storage of maintenance items.  A toilet was installed in a building outside of the main church in 2017.

Originally there was stained glass in the east window but in February 1970 there was a fire in the church which caused major damage to the roof, destroying windows and the organ. The church was rededicated on 25th January 1972. The replacement organ is an 1825 Flight & Robson (London) chamber instrument which is positioned at the north west end of the nave adjacent to the font.

The church waslicensed for marriages in1990. A surpliced choir was introduced in 1888. Sadly in recent years there has not been a choir in Holy Trinity. Currently Services are at 10.45am on Sundays. The first Sunday of the month a family service is held often with a baptism. On other Sundays eucharists are celebrated. “Messy Church” takes place 4 or 5 times a year at 3.00pm on Sunday afternoons. It is for children, parents and helpers with activities in the school hall, followed by a short act of worship in the church, finishing with a meal back at the school.

Repairs, maintenance and new works in the church are funded from money raised by the Friends of Holy Trinity Church of Calne (FOHTCC) which was registered as a charity in 2004.

The churchyard covers about three and a half acres with the oldest graves being nearest the roadway. As well as graves of many local people there are interesting graves such as that of an officer who fought at the battle of Trafalgar and war graves from the first and second world wars and other conflicts.

There is a Holy Trinity Field Trust which is used to fund the maintenance of the churchyard. A contractor cuts the churchyard grass twice a month from April until September.

Two areas in the old part of the churchyard are kept wild to encourage meadow flowers, these areas are only cut in September.There are various trees in the chuchyard including yews, redwoods, pines and a flowering cherry just outside the south porch. There are bushes throughout the churchyard such as holly, elder, laurel and briar. Flowers including snowdrops, crocuses, daffodils, primroses, cowslips bluebells and foxgloves can be found. Many birds, animals and insects can also be seen.

In 2012 the Royal Horticulural Society awarded the churchyard level 2, improving, in the “Britain in Bloom – In your neighbourhood.” competition.