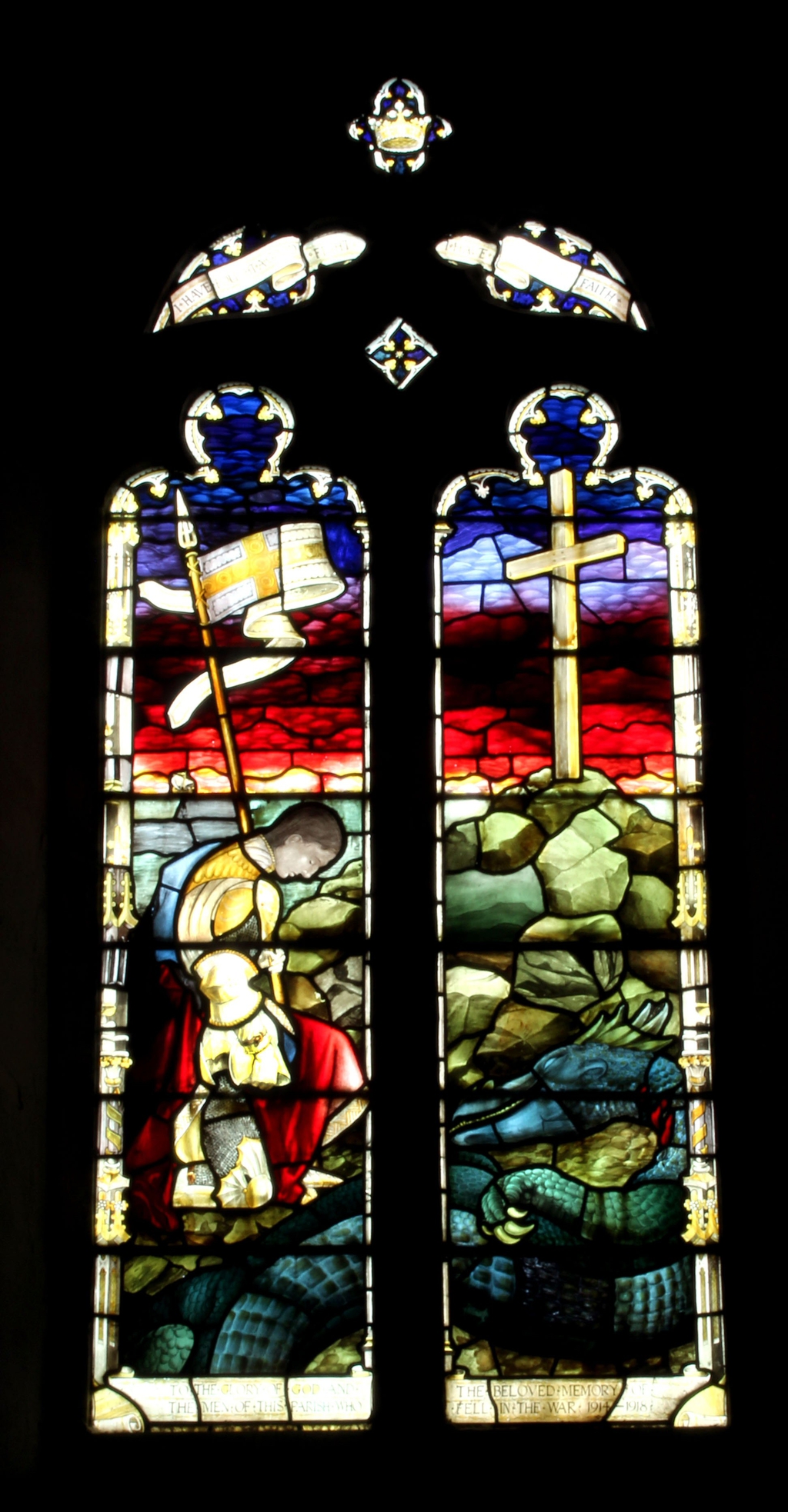 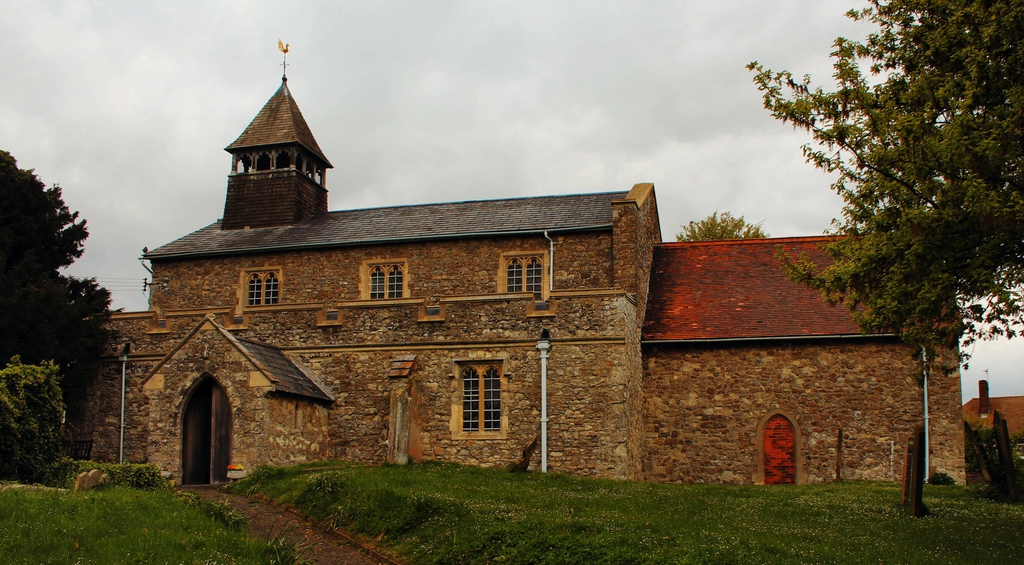 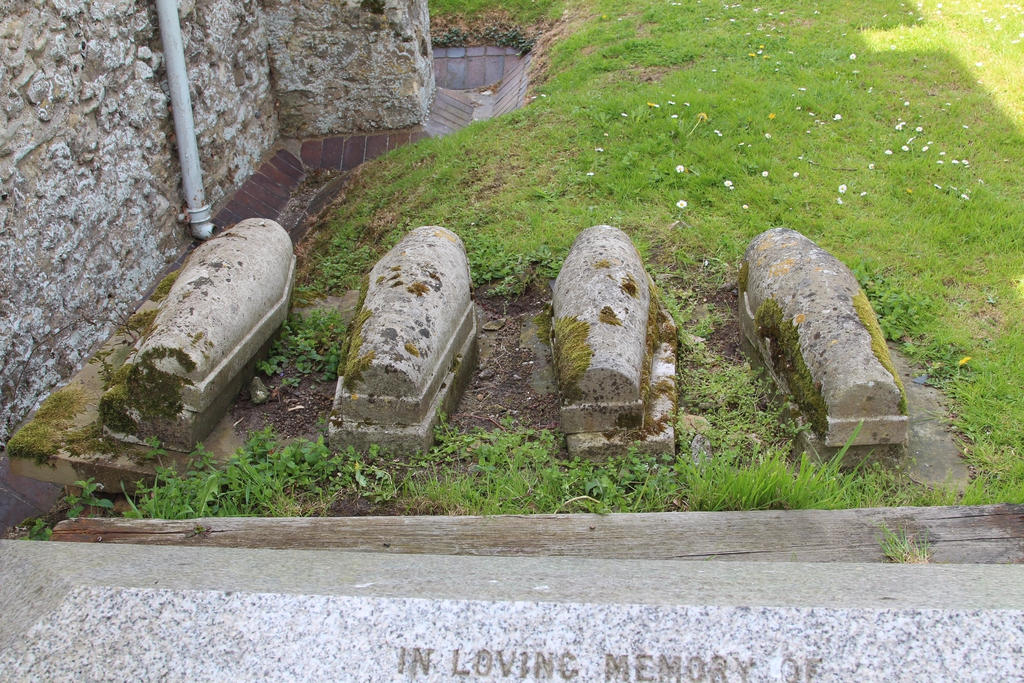 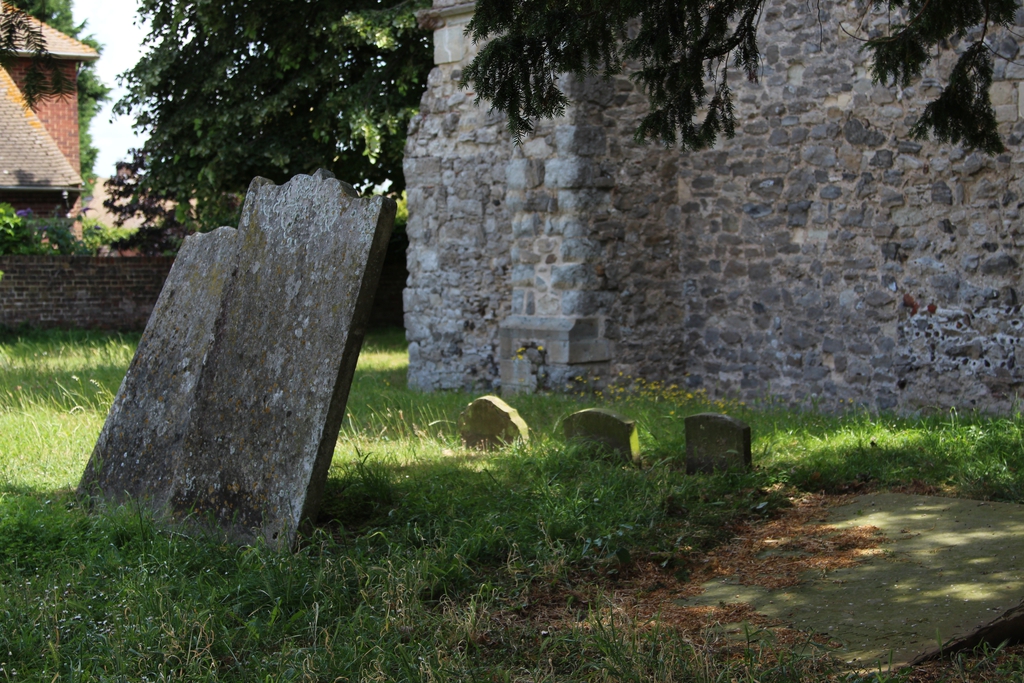 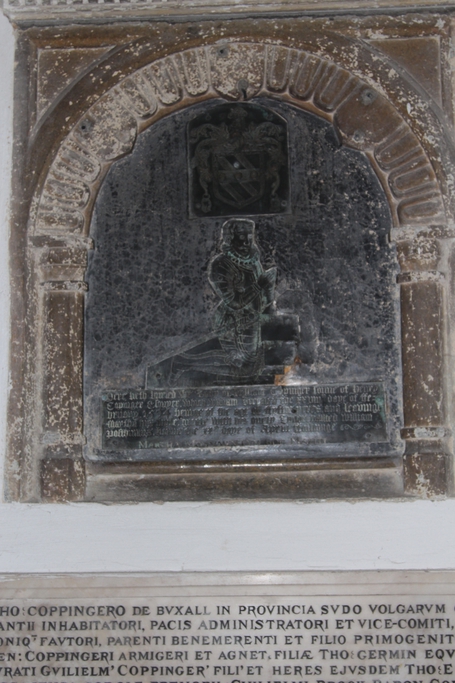 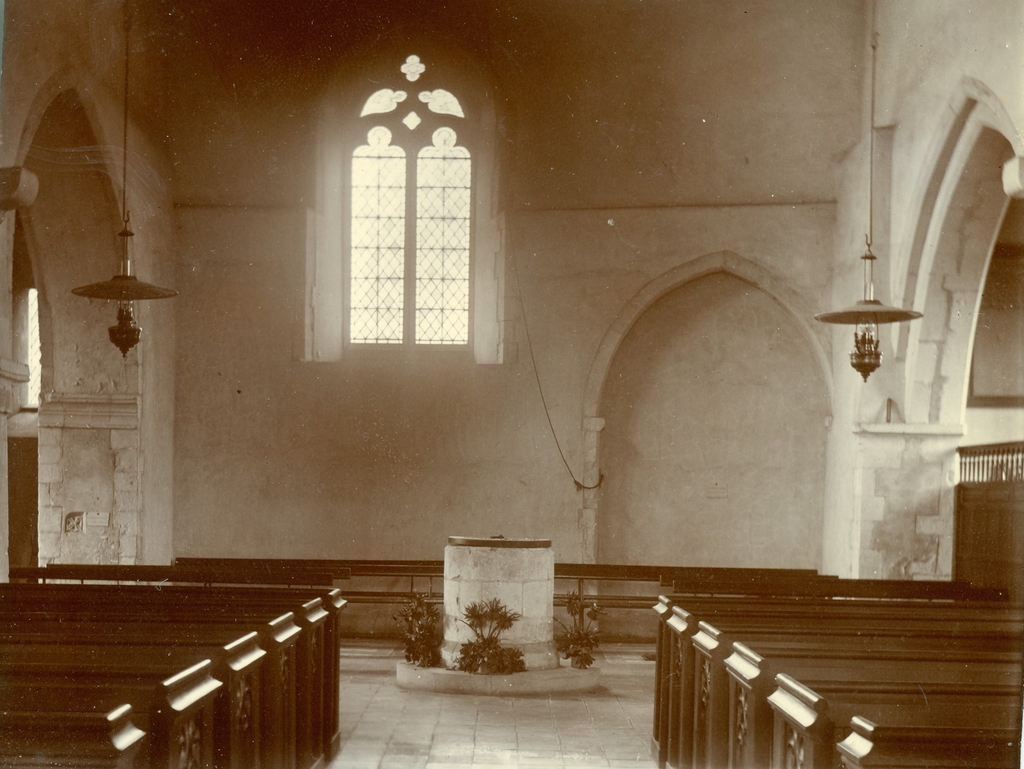 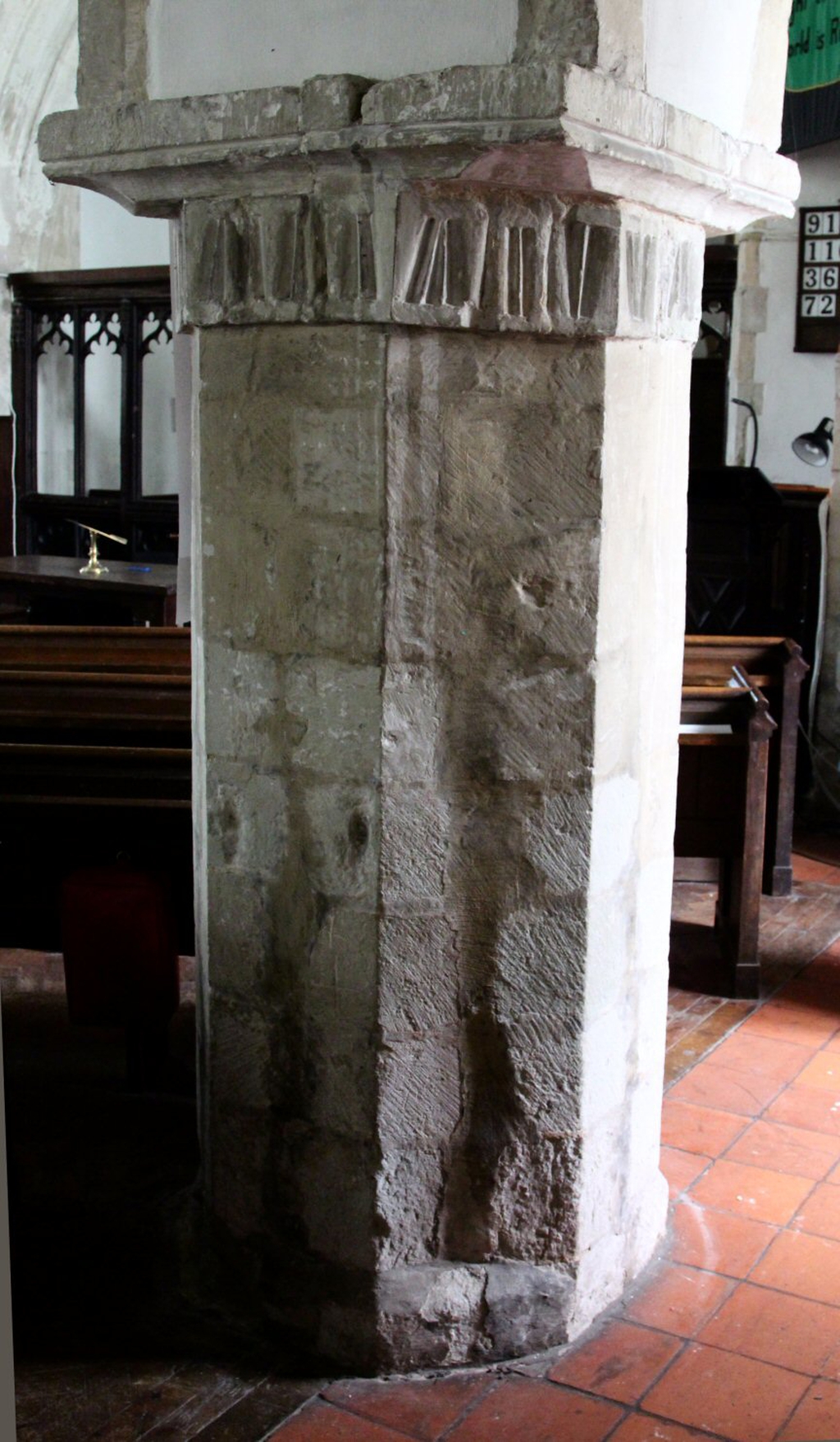 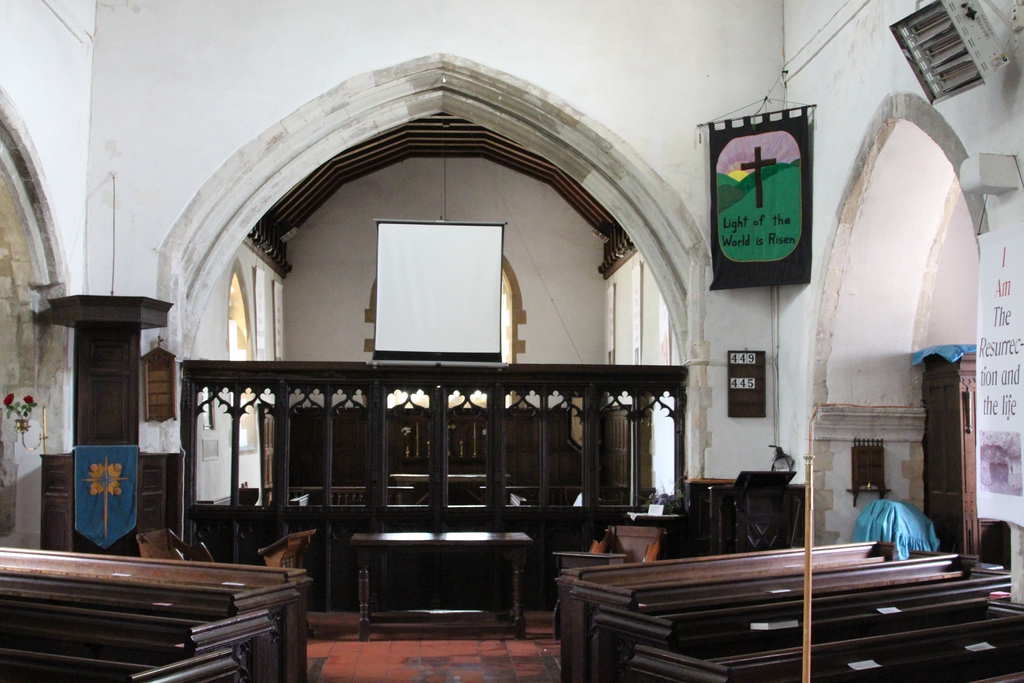 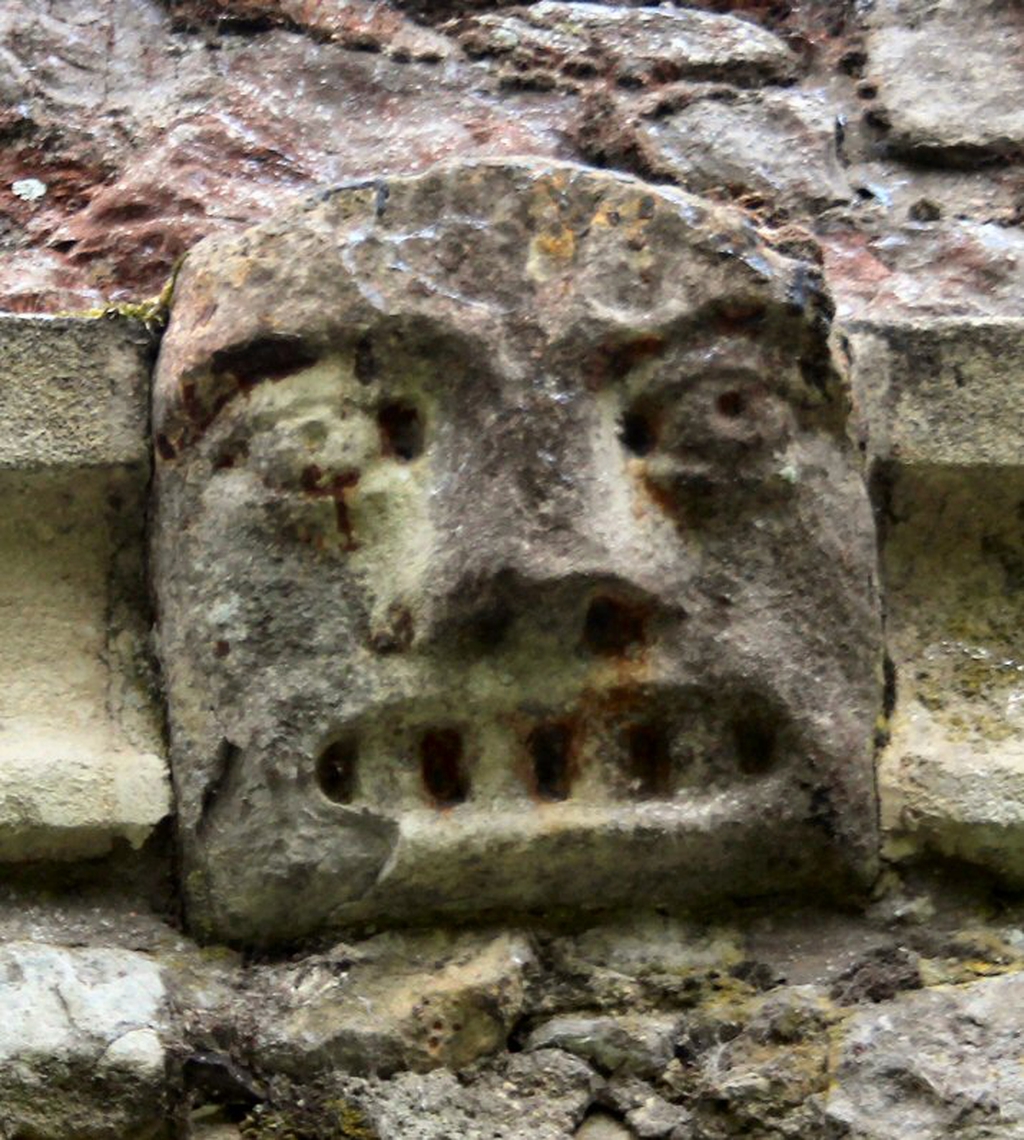 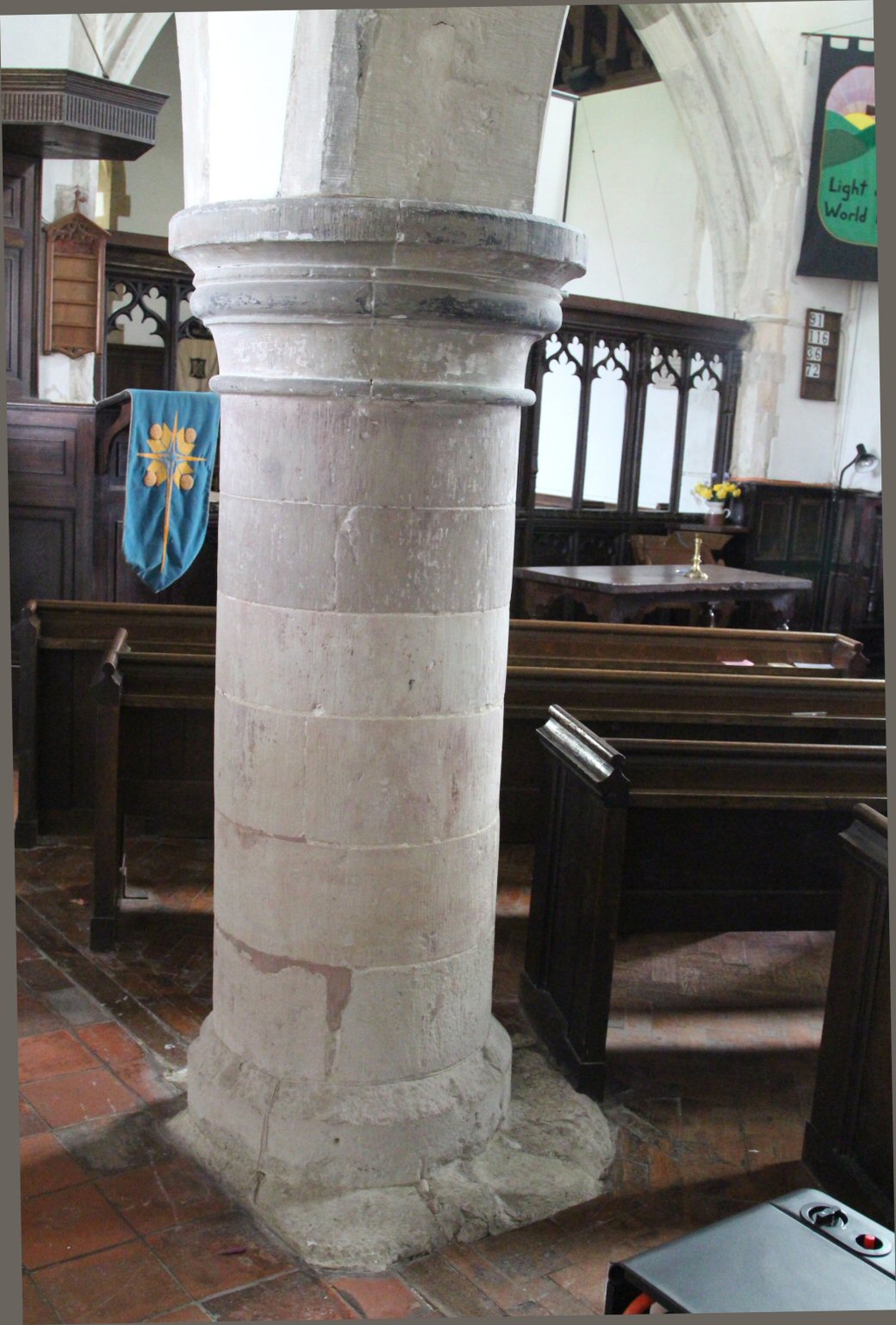 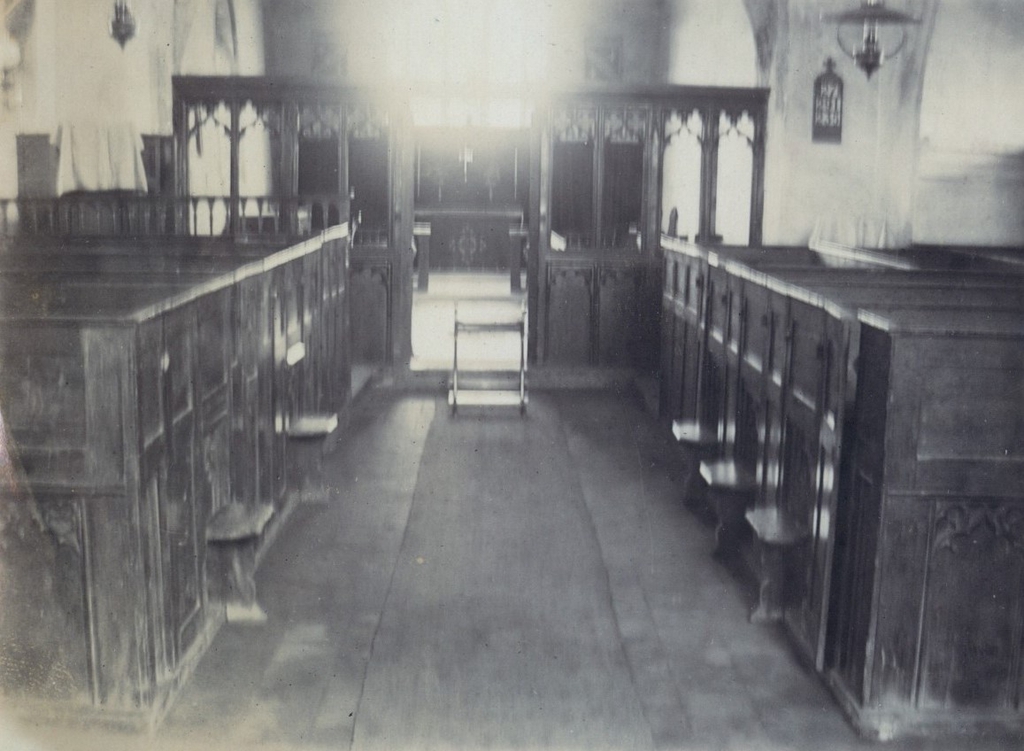 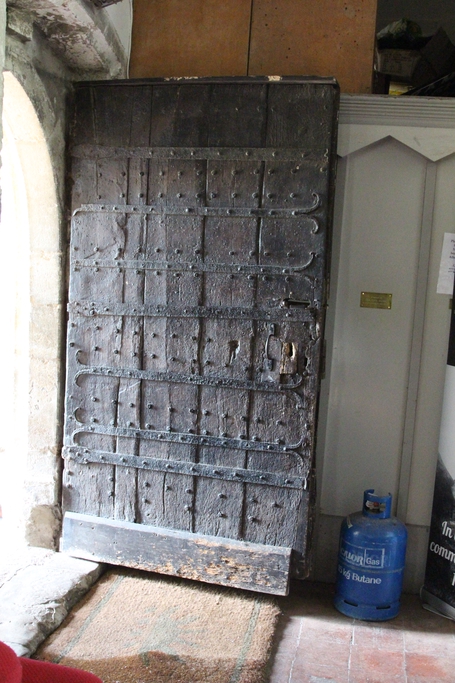 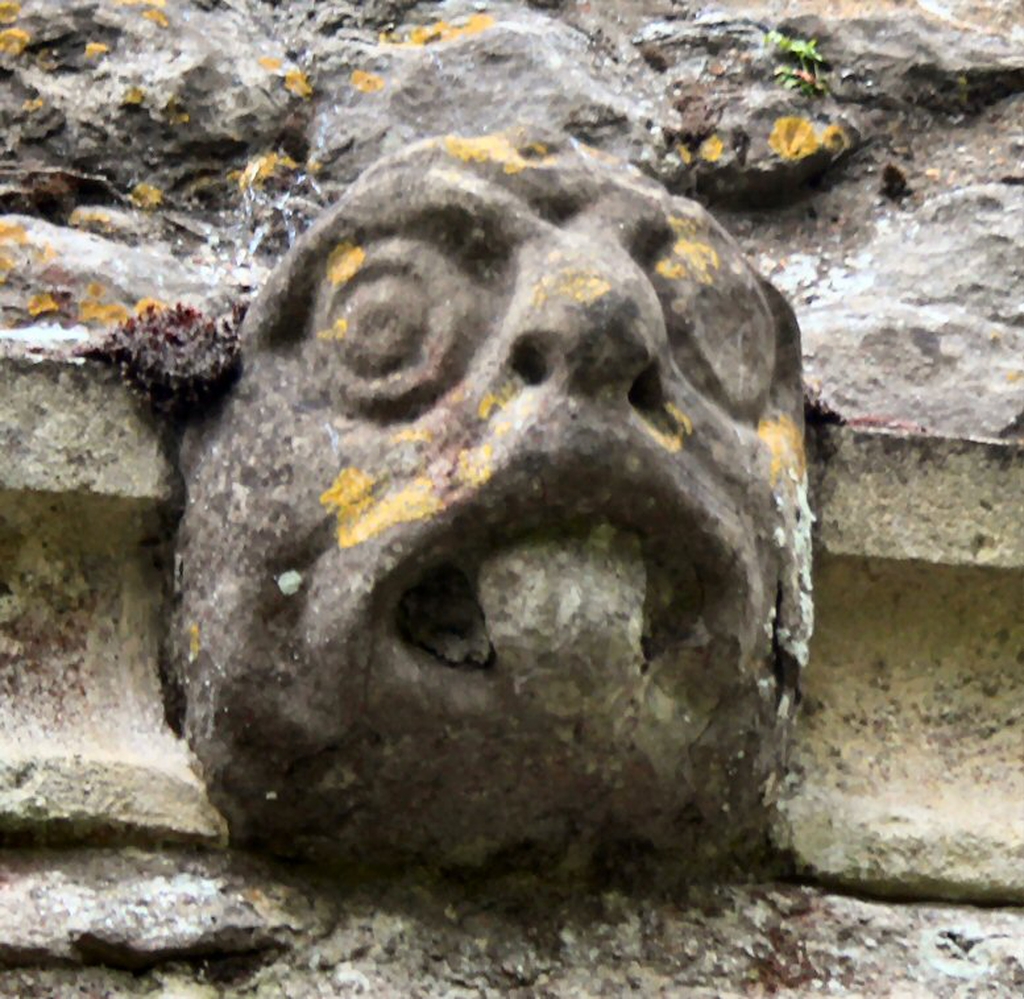 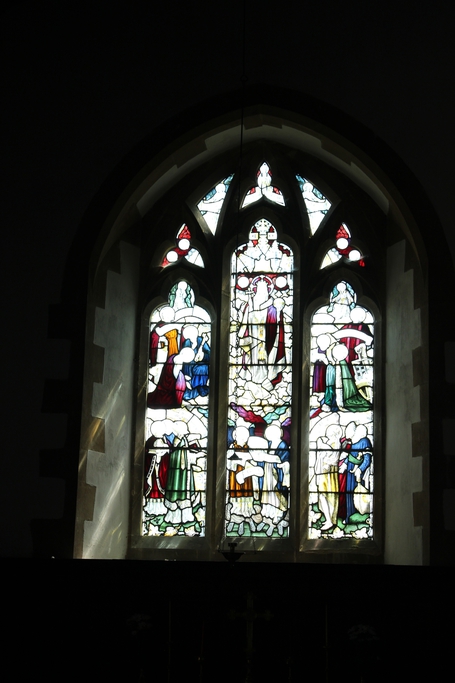 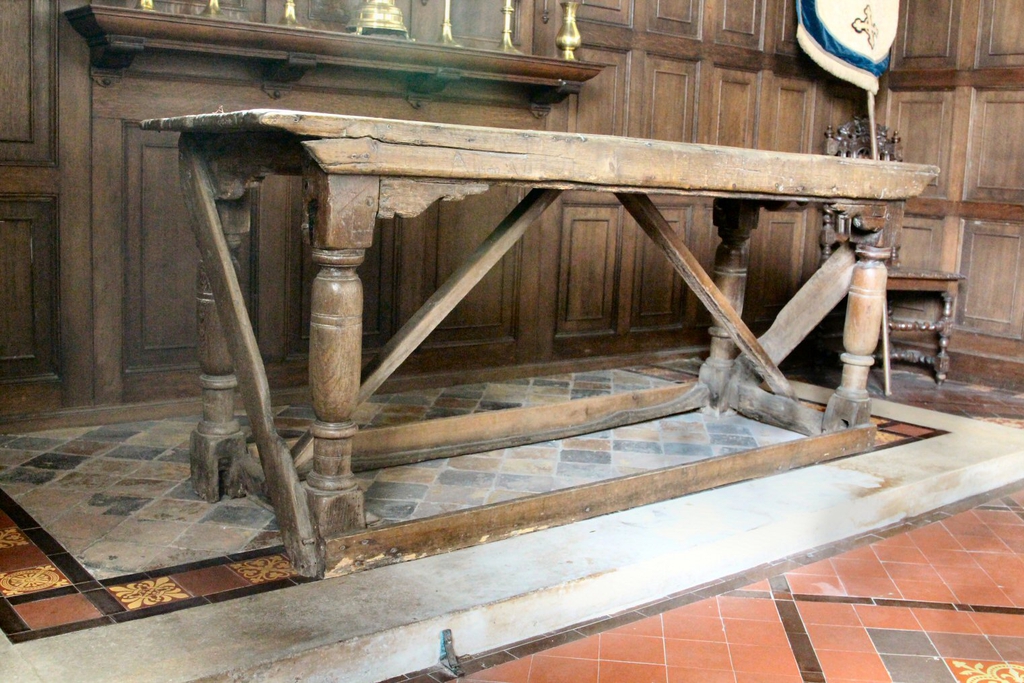 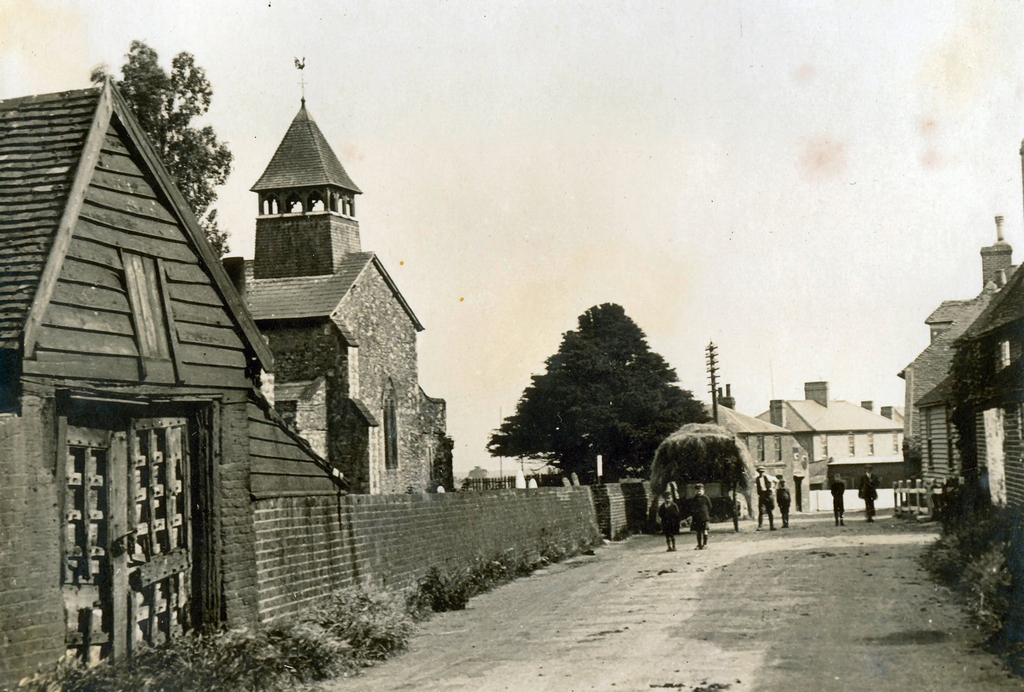 The exterior of All Saints’ church in Allhallows is at first glance unremarkable but it has many interesting features inside. Like the other churches on the Hoo peninsula, it is thought to have its origins in Saxon times. The original wattle and daub construction was later replaced by stone, and some evidence of the early building remains, notably in the thickness of some remaining original walls up to a height of approximately twelve feet, and a small portion of Saxon stone work, still to be seen behind a glass panel in the south west wall. Still visible also are large stones, jutting from the walls on the north and south side, which would have supported the roof beams.

A visitor to the church can see several centuries of English church history encapsulated in the alterations, enlargements and improvements made to the church building as architectural fashions and building techniques changed. Towards the end of the 12thcentury arches were constructed on the south side of the nave in order to build the south aisle, octagonal pillars were built to support the arches and have a curious, naive decoration at the top of the pillars. Approximately forty years later, around 1220, the north aisle was built and the original wall removed.

The pillars supporting the arches on the north aisle are very different and clearly the work of a more accomplished stone mason. Building techniques had clearly improved too as the walls were able to be reduced in thickness by about thirty percent. At this point the church would have consisted of a nave, two narrow aisles and a chancel. Traces of the colours painted on the pillars – red, slate blue and yellow –can still be seen on the stone work. We have coloured the picture to give you an idea of how gaudy it would have looked to modern eyes. At around the same time the present-day ‘tub’ font, painted red and yellow, was also placed in the church.

There is evidence that after the Norman invasion, but before 1300, a bell tower was planned but there is no record that it was ever built. An early Norman arch was subsequently blocked up.

During the 14th century, in the reign of Edward III, the chancel appears to have been either enlarged or rebuilt, and the western window inserted in the nave – off-centre because of the blocked archway. In the 15th century, during the reign of Edward IV, considerable improvements were made to the church: the clearstory was added to the nave, the north and south aisles were enlarged and new windows were inserted. The window arches in the north aisle were decorated with small quatrefoils.

In addition the rood screen was erected and oak benches placed in the nave. This work was largely carried out by the De Pimpe family, whose home All Hallows Place, now disappeared, stood on the north side of the church. At the eastern end of the north aisle can be seen an archway, all that is left of the chapel of St. Mary Magdalen, which was the burial place of the De Pimpe and Copinger families of Allhallows Place, but which fell into ruin in the 18th century.

After the Reformation little work was done in the church until the 18th century when the communion rails and a fine oak pew were added. The wood from this pew was later to form the vestry. The pulpit appears to date from the reign of George III. Before the Reformation few churches had any seating, apart from occasional benches around the walls (from which derives the saying ‘The weakest go to the wall.’) After the Reformation, however, preaching became a more important part of the service and benches were added. Some of the richer parishioners paid for their own pews which were sometimes boxed in to provide privacy and separation from the lower classes, and later some churches rented out these boxed pews to specific individuals. An example of such pews can be seen in a photograph taken before the rearrangement of the church in 1901.

The chancel was almost wholly rebuilt around 1856 and again restored in 1891, when a new roof was also built. Wooden panelling was added, as well as a memorial window in the east wall over the communion table. In 1901 a major restoration and rearrangement was carried out, involving the removal of the box pews, from which the vestry and the lectern were constructed, and the placing of the font and the pulpit in their present positions. A number of photographs, taken before and after the 1901 alterations, are still in existence.

The communion table, dating from Tudor times, was restored to the church after being discovered in the Rose and Crown public house opposite.

In about 1920 a monument was erected on the west wall of the nave, commemorating not only those who had died, but also those who returned from the Great War, as well as a further name of a parishioner who died in the 1939-45 conflict. It consists of a stained glass window depicting St George slaying the legendary dragon, an ornately-framed panel listing the names of all those who served, and a heavy mahogany table, decorated with a tapestry frontal, on which wreaths are laid on Remembrance Sunday.

There are three other old memorials in the church: a brass in the centre of the chancel commemorating Sir Stephen Sheraton, a former vicar who died in 1518 ( the figure is lost but the inscription remains); secondly a brass inscription to William Copinger, dated 1594, together with a marble slab with a Latin inscription to Thomas Copinger of Buxhall in Suffolk, dated 1587 (part of a monument formerly in St. Mary Magdalen’s chapel, now on the north wall of the chancel); and thirdly a gravestone of the Arnold family in the chancel, dated 1767.

On the outside wall on the north aisle and chancel there are some interesting features. These are different from those on the south side, perhaps because they could be seen from All Hallows Place. Decorations called ‘gallets’, expensive and labour-intensive, were included in the pointing, and there is a number of gargoyle-type faces on the north aisle extension. Three of these are medieval but the first is a lot more square in shape and seems to be considerably older, and possibly even a pagan Saxon carving

Today the church building still stands as a lasting monument of the faithfulness of God and the continued witness of his people. A Service is held each Sunday at 11am, and the Gospel is proclaimed faithfully and we invite you to come and join us at one of our services.