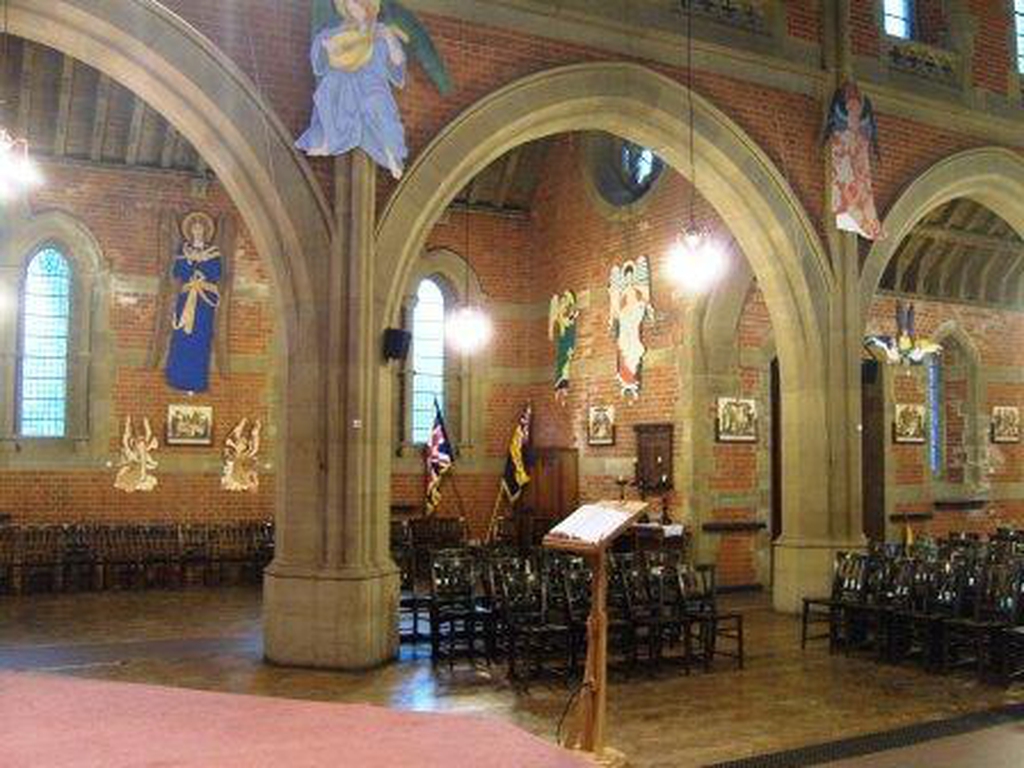 The Church of All Saints, Elland, owes its origin to the vision, courage and energy of Canon Ernest Winter. Not long after beginning his ministry as Rector of Elland in 1893, he encouraged the Parish to take on a work of Church Extension, aiming to provide much needed accommodation, and to serve planned developments on the Savile Estates. Fellowes Prynne was asked to produce a design, after Lord Savile gifted the site. Winter, who had worked in an architectural practice himself, considered Fellowes Prynne’s design a “masterpiece of architectural skill”. An impression of the Exterior was printed in The Builder for August 14th, 1897, before the foundation stone was laid in 1900. Chancel, transepts, lower vestries and three bays of the unfinished nave were completed for the Dedication on November 4th, 1903, at which the architect himself led the Procession, carrying the cross he designed and gave to the church. (A further article followed in The Builder of November 14th, 1903.)

Due to difficulties in fund-raising for such an enormous project, the church was not Consecrated until April 30th 1912, when the project was declared ‘debt free’. Canon Winter immediately set about raising funds to complete the work, with the addition of two further bays in the nave, a baptistry at the west end, and a new entrance leading into a cloister and adjacent Hall. The original plan had provided for an imaginative entrance at the west end, leading directly and dramatically into the baptistry. The War delayed work, to Fellowes Prynne’s further designs, until 1917, shortly after Canon Winter’s death. The architect also added a bronze corpus to his original processional cross. His last contribution to the church was the reredos and high altar, designed shortly before his own death in 1927, but not erected until 1928, when it was regarded as a tribute to both men. Their creative friendship clearly contributed to the vision and design of All Saints; Canon Winter described his colleague as “as good a churchman as he is an architect”.

(References from Fitly Framed Together, published by All Saints Elland, 1947, and other information in the Parish records.)

It is astonishing to think that all this went into building a daughter Church, testimony to the faith and vision of our founders. When the church was built it was in open fields, before the surrounding estates were completed. An unusual building for this part of Yorkshire, it has long been seen as ‘a citadel of the faith’.

A daughter church of St Mary’s, Elland, All Saints became a Parish Church in 1983 with the formation of the Elland Team Ministry. By the early 1990s, there was great concern about the condition of the church roof, and especially the distinctive copper fleche, topped with a figure of an Archangel, due to water ingress. The then Parochial Church Council, on architect’s advice, made the reluctant decision to remove the fleche, a decision that was challenged in a Consistory Court Hearing.

A part funded English Heritage project has seen the roof completely retiled, and the fleche saved, re-coppered and made watertight. This project, together with other restoration work, was completed in time for the celebration of the building’s Centenary in November 2003, at which the Archbishop of York dedicated a new altar and lectern for the re-ordered nave sanctuary.

A high quality refurbishment of the rooms at the lower end of the Church Building saw the opening of the Canon Winter Centre in 2011, providing a superb venue for both Church and Community use, which is also available for hire; contact us for more information, or see under Canon Winter Centre on this site.

Further pastoral reorganisation in 2012 created a new Parish of All Saints, held in plurality with St Mary the Virgin, by the Rector of Elland.

All Saints on Wikipedia: