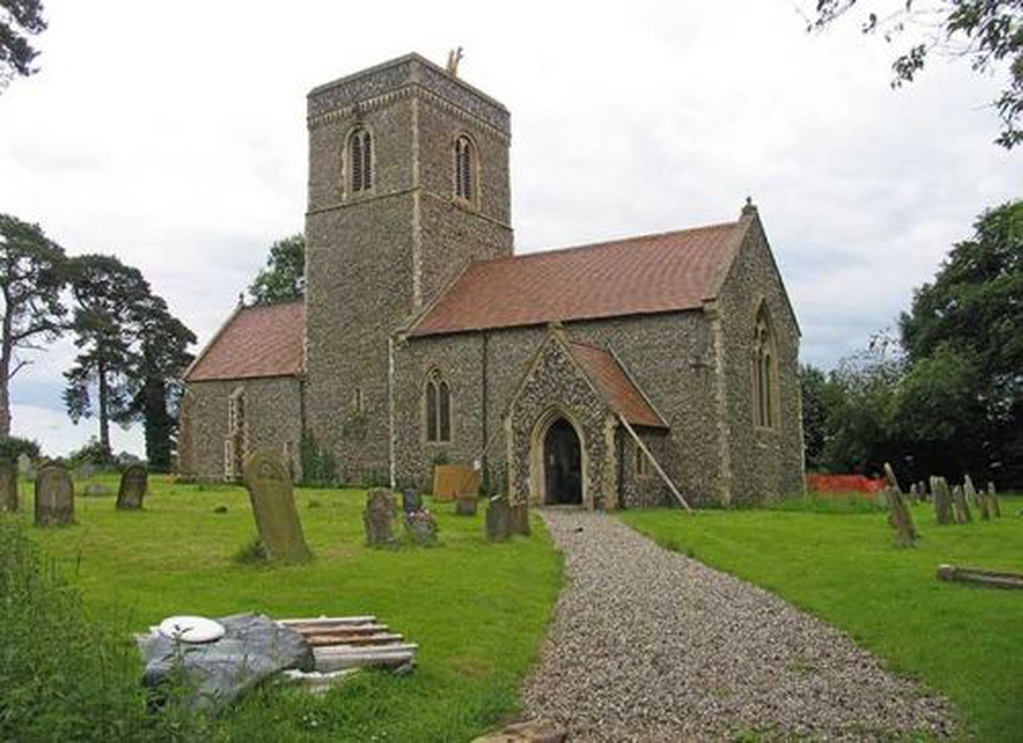 This church is open in daylight hours throughout the year.

The Domesday Book records that there was already a church here in Fundenhall in 1086 endowed with 28 acres of glebe land The will of Eadwine who lived 1033-66 mentions the church at Fundenhall and part of the massive central tower may well have existed then. The tower and the nave were remodeled c.1100 when the beautiful south doorway was added. The stone used is from Caen in Normandy and may have been surplus to requirements at the cathedral then being built at Norwich. One can imagine a gang of rogue masons with a cartload of fine stone stopping off at Fundenhall on the way south and offering to provide a handsome new entry into the church at a knock-down price.
In 1258 the Manor of Fundenhall was held by a descendant of Roger Bigod, Sir Bartholomew de Creke, and on his death in that year his widow founded a convent of Augustinian nuns to his memory. It was established at Flixton near Bungay and the manor of Fundenhall was transferred to the nuns so that they could use its revenues, They also had the right to appoint rectors to the parish.

In 1347, just two years before the Black Death, Bishop Bateman rescued the declining finances of the nuns by making over the entire income from the tithes and endowments of the parish to them, downgrading the living so that a chaplain, paid a meagre stipend by the convent, looked after the spiritual needs of the inhabitants. This unsatisfactory arrangement was to continue for almost 300 years and accounts for Fundenhall church not being rebuilt in later medieval times. Fundenhall, in contrast, was dependent on a distant and impoverished convent and its church remained largely unaltered with the exception of the tower. This was heightened in 1420 or thereabouts with the addition of an upper stage paid for by William Danyell, a wealthy Norwich merchant who had been born in the village.
In 1502 Fundenhall found another wealthy patron in John Burgeys (or Burges) who paid for the remarkable rood loft to be built across the east end of the nave. Part of the screen survives despite the Victorian restoration of the church that took place at a time when the building was again threatened by terminal decay

When Robert Ladbrooke sketched the church early in the 19th century the nave roof is obviously in a state of advanced decay.
A knight in shining armour appeared at the last minute in the form of Gerard Barton who lived at Fundenhall Grange and purchased the position of lay rector.[See longer account on link page]