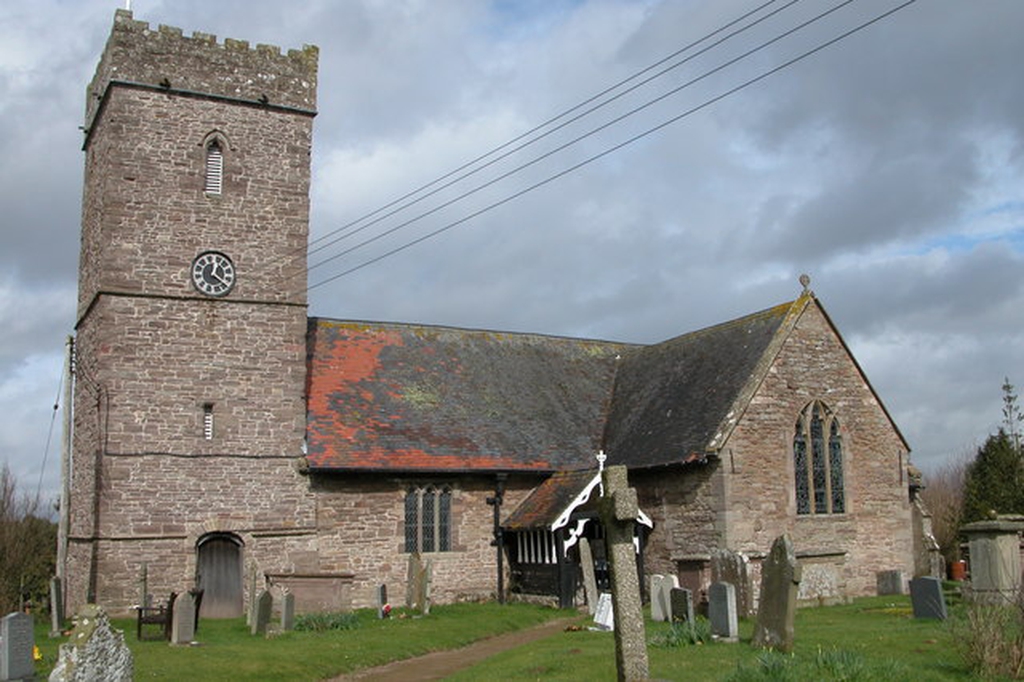 King's Pyon: St Mary the Virgin
Services and events
News and notices
About us
Find us
Bush Bank to Weobley King's Pyon Hereford
Get in touch
01432 830581
Facilities
More information
Edit this Church

King's Pyon, formerly called "Pione" (a name of Saxon derivation probably meaning a hill) is originally recorded as belonging to Edward the Confessor, who is the king who gives King's Pyon its name (or “Pione Regis”).

The origins of the existing Church (which is Grade I listed) go back to Norman times. It is mentioned in the Domesday Book of 1086 having been granted to William FitzOsbern, William the Conqueror’s steward, who was created First Earl of Hereford, Lord of the Manor of King’s Pyon in 1067.

In the early 13th century the Church, together with its land and income, were granted to a community of Augustine monks who founded the priory of “St. Leonard de Pyon”. St. Leonard is the legendary patron saint of innocent prisoners of conscience and deeds. The original dedication of the site in King’s Pyon could possibly have been to St. Leonard.
Subsequently this community moved two miles to the south to join their brothers at the Augustine priory at Wormsley, which was dedicated to St Mary. The remains of the former priory are now incorporated into a house now known as The Grange, set in the woods on the west side of Wormsley golf course. Interestingly the parish church at Wormsley was dedicated to St. Mary and St. Leonard.
The Anglo-Norman lords of the manor from the early 13th century to the late 14th century were the Esketot family and their successors the de Eylesfords They held the manor by recruiting and training soldiers for military service to their feudal overlords, the powerful de Lacy family then established in nearby Weobley Castle (Domesday Book called it Wibelai - Wibba's ley or forest clearing, Wibba having been a 6th-century Saxon chief).
The first dedication of the Church to St. Mary is recorded in 1312 when Sir Gerald de Eylesford was the patron of the Church.
The Abbot and subsequent Priors of Wormsley are recorded as patrons of the Church from 1313 for over 230 years until 1545.

The Church survived the Dissolution of the Monasteries in 1536, the English Civil Wars from 1642 to 1651 and the Commonwealth. Much of the interior decoration of the Church was destroyed by Scottish mercenary troops of the Parliamentarians at the time of the siege of Hereford in 1645. The effigy of Sir Gerald de Eylesford and lady in the recessed tomb in the South Transept were defaced. The Scots clearly loved pets, for the dog at their feet was undamaged.

In 1650 the vicar, Thomas Griffiths was ejected from his position and imprisoned for his beliefs and allegiance to King Charles I. After the Restoration in 1660, he too was restored and served the parish until 1677.

A prominent family of that period was the Carver Family who built and lived at the Butthouse to the south of the parish. Royalists and Lords of the Manor through most of the 17th and early 18th centuries, they are remembered in the monument in the North Vestry to George Carver dated 1732. Members of this family are recorded on the list of Patrons in the Nave from 1661 to 1753.

The Carpenter family of Hidefield (now known as Hyde Farm), north of the Church also contributed greatly to the life of the Church during the 18th and 19th centuries, a prominent member being John Carpenter who was High Sheriff of the county in 1711 and Justice of the Peace, as is evidenced on his ornate memorial plaque (by B. Jennings) on the west wall of the South Transept. His kinsman, George became a peer and politician and was known as The Lord Carpenter. He was patron of the Church from 1753 and was granted the Irish title of First Earl of Tyrconnell in 1762, just before he died. His son also George, the 2nd Earl, was the patron of the Church up to 1776.

More recently, the Church had close associations with three families, who have left significant memorial plaques, and magnificent stained glass windows within the Church:

John Peploe (who died in 1805) and his son Samuel Peploe, who built Garnstone Castle in 1807 (designed by John Nash) assumed the patronage of the Church from the end of the 18th century (succeeding the Earl of Tyrconnell) until 1897, when the Garnstone Estate was sold to the Verdin family, who retained patronage of the Church till the middle of the 20th century. During their time at Garnstone, one of the family, namely the Rev. John Birch Peploe, was vicar of the Church for 40 years until 1866, and his kinsman the Rev. Hanmer William Birch Peploe continued as vicar for another 10 years. The Peploe family financed the construction of the North Transept and dedicated a window in memory of the Rev. John Birch Peploe in 1872.
The substantial Wellingtonia tree to the north of the Church was planted as a sapling following a service of dedication in 1897 on the occasion of the Diamond Jubilee of Queen Victoria, which coincidentally marked the end of the era of the Peploes.

The Tomkins family originally came from Weobley. Benjamin (Senior) purchased Black Hall Farm and headed this prominent family of Kings Pyon. He and his son Benjamin Junior Tomkins are well known for their association with the development of the Herefordshire cattle breed. One of the Tomkins daughters married into the Cooke family who lived at Brooke House north of the Church and continued the work of the Herefordshire breed of cattle, renowned worldwide. Both families contributed to the Church’s until the end of the 19th century and left their mark in the memorials, notably the memorial window of the Birth, Crucifixion and Ascension of Christ above the altar, and the elaborately carved reredos below.

The King family retained a longstanding associations with the Church from the 16th century. Thomas King, a yeoman, died at Black Hall Farm in 1529.
Sir Henry Seymour King KCIE and MP negotiated the merger between his family bank and Cox’s Bank, to form Messrs Cox & Kings, and the eponymous travel company. Dr. Edwin King, was vicar of the Church from 1906 to 1930. The family was instrumental in preserving the South Transept and installing the two stained glass windows in 1924. Their sole male heir, Richard was killed in 1916 on active service in Mesopotamia during the WW1 and is commemorated in the east tryptych. The stained glass in the south window is in memory of Julia Mary King, Sir Henry’s wife, possibly a Red Cross Nurse.

The First World War Memorial stands proudly at the bottom of the west escarpment of the Church below the West Tower and records the names of the 13 boys who died for their country.

In 1871 the population of the parish was 471 with 108 separate dwellings, and life revolved very much around the Church. Since World War II King’s Pyon has lost many of its older cottages and even its dance hall built in the 1930s. It no longer has its Post Office, and the shop closed after World War II. There was never a Parish hall. Before the last war there were up to 100 children in the village of all ages at anyone time, served by the village school, now the Old School House, up the hill southwest of the Church. All the families knew each other, and even after World War II, there was a flourishing Sunday School well served by the then daughter of King’s Pyon House, Miss Farron, whose more recent family are remembered by their tombs on the southwest side of the Church. Also interred there is her nephew, Dr Prescott, who was a House Master at Eton and fought in the closing stages of The Great War in 1918.