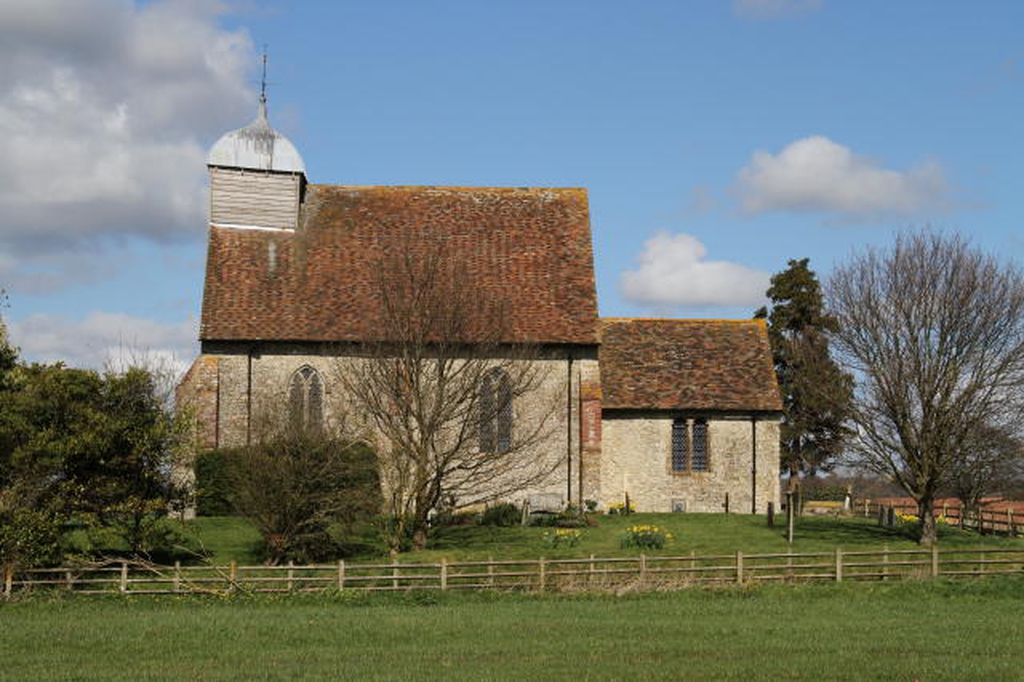 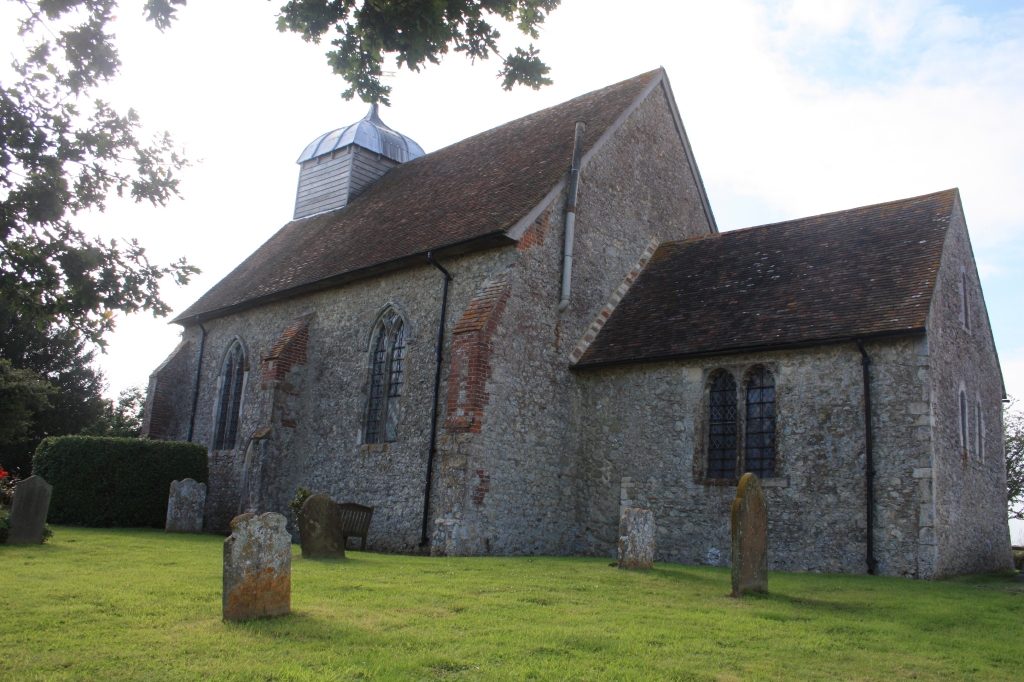 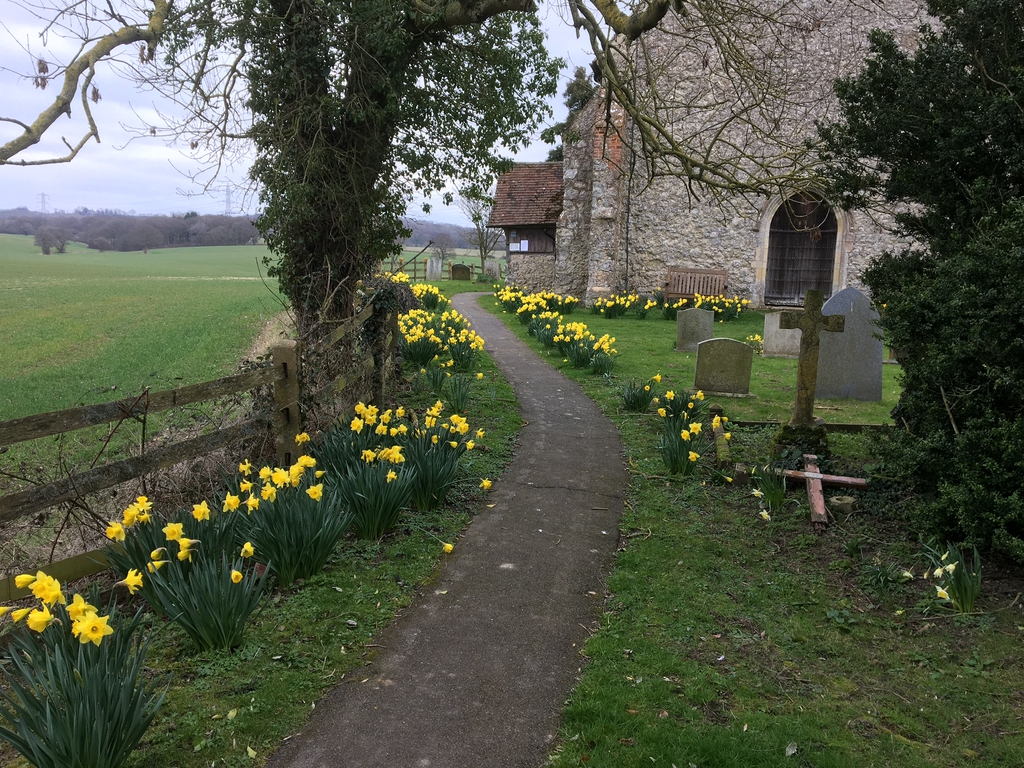 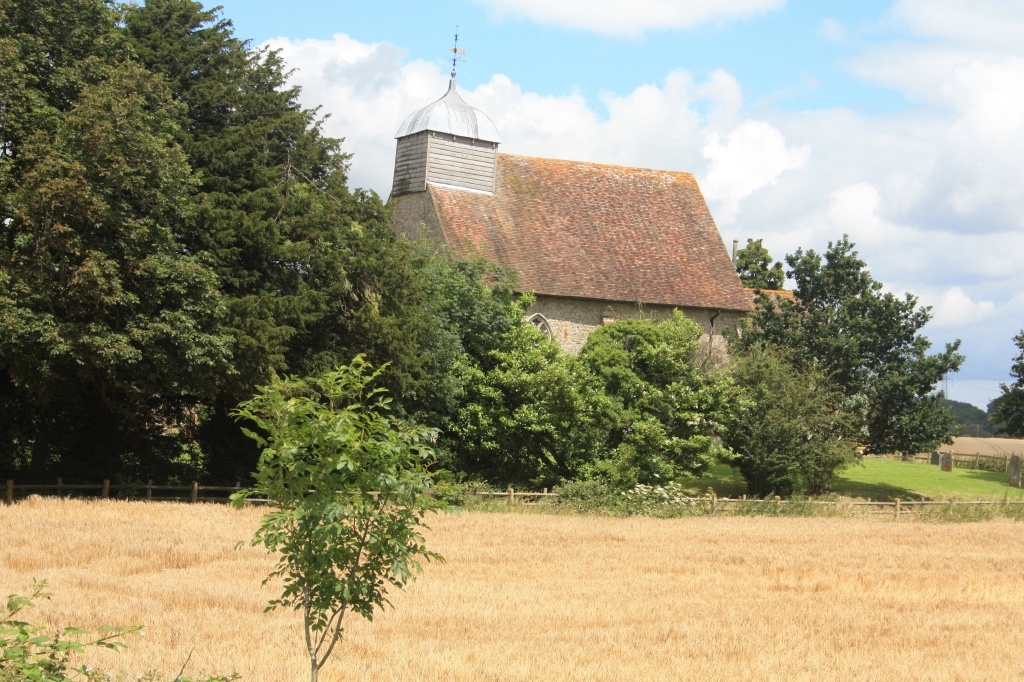 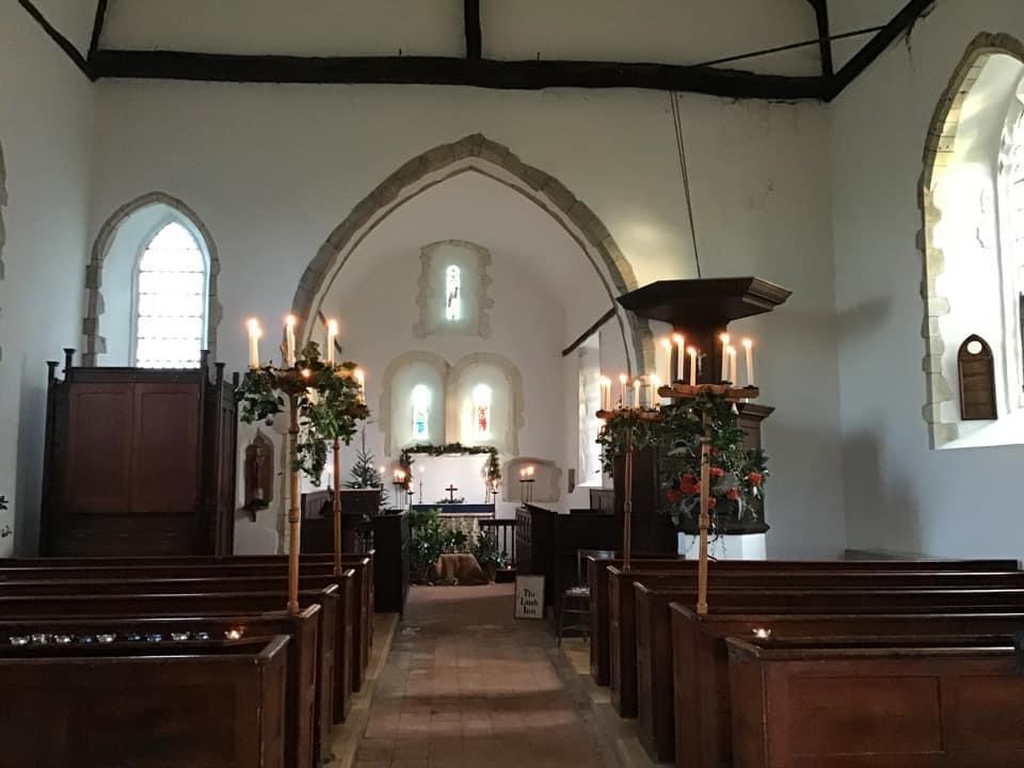 The earliest written record of there being a church on the site of St Rumwold in Bonnington is said to date back to AD 796. Mention of it as a place of Christian worship is made in a charter granted by King Offa of Mercia to the Archbishop of Canterbury.

It is highly likely that the early church would have been built on an existing sacred site. There are several clues in the churchyard itself to suggest that the original church was built on a raised mound, typical of those used for pre-Christian ritual. These mounds were often circular or oval in shape and steeply banked. The curves of the boundary of the churchyard and the general topography, including the steep bank on the south side, suggest the existence of such a mound. The churchyard at the west end appears to have been added to the original area at a later date.

Written records are scarce until relatively recent times, however the famous 11th century Domesday Book compiled by William the Conqueror contains a mention of the parish:-

'William, son of Grosse, holds of Hugh, Bonintone. Norman held it of king Edward, and it was taxed at one suling. The arable land is four carucates. In demesne there is one, and nine villeins, with four borderers having two carucates. There is a church and eight servants, and wood for the pannage of eight hogs. In the time of king Edward the Confessor it was worth four pounds, and afterwards three pounds, now one hundred shillings.'

Bonnington is a church with few memorials and internal decorative features, so the history of the church has to be read by examining the clues left behind by former generations.

The chancel at the east end is clearly much smaller than the rest of the church and in a different style. It could have been the first stone church built to replace an earlier wooden, wattle and daub structure. Remnants of an old door on the south side of the chancel suggest it would have had its own entrance. The windows above the altar are small and arched in the Norman style.

The main body of the church appears to have been added to the chancel and the connecting arch is very late Norman. There is written evidence in the will of William Kynett that the window on the south side of the chancel was added in 1452 at a cost of 26s. 8d.

A small stone ledge near the back of the organ suggests that there was once a rood screen separating the priest in the chancel from the congregation in the main body of the building. This was a common practice in mediaeval times. References to money being left to buy candles for the rood screen can be found in several 15th and 16th century wills. Rood screens were generally removed following the Reformation.

At one time the manor of Bonnington was owned by the Knights Templar, but when the order was abolished in 1308 the manor, and presumably the church, were made over to the Hospitallers of the order of St John of Jerusalem who in their turn were also suppressed, this time by Henry VIII in 1544. The manor was then granted to Sir Thomas Moyle, who conveyed it to Sir James Hales. Sir James incidentally was the only judge who refused to sign the instrument crowning the ill-fated Lady Jane Grey, declaring the attempt to exclude Mary Tudor was unlawful.

In early mediaeval times Bonnington stood much closer to the sea. Before the great storm, when the River Rother changed its course, and before the widespread taming of the marshland, Bonnington would have been a site where boats landed and embarked. There were often churches or chapels at such places for pious travellers to pray for a safe passage.

This might be one explanation for the existence of three churches in a line, Bonnington, Bilsington and Ruckinge which would all have been close to the ancient shoreline. It is also unusual that three of the four churches of the benefice are entered by the north door. By ancient superstition it was said that this was the devil’s door and north doors are frequently blocked in. The explanation for the use of the north door is probably mundane and has something to do with the prevailing wind.

There is a list in the porch at St Rumwold of priests and incumbents. Look closely at the stonework surrounding the north door and there is an unofficial list of some of their parishioners, WG, TM, IG, TH and others, plus a date of 1655 carved as historic graffiti. We have however the full name of one 17th century parishioner. Valentine Knott’s legacy of 8 shillings for the poor is commemorated ostentatiously at the northwest end of the church.

The 18th century may have been a prosperous time for the church at Bonnington. There are several signs of activity including the erection of a George III coat of arms and the pulpit is a good specimen of Georgian woodwork. The gallery might also date from that era and have once been used by church musicians.

A short description of the church was given in 1799 in Edward Hasted’s survey of the county:-

'The church, which is dedicated to St. Rumwold, is small, consisting of an isle and chancel. It has no steeple, but a pointed turret raised on the roof at the west end. It is kept very clean and neat. There are no memorials in it, but some small remains of painted glass.'

The peace of the Church and the surrounding area was to be disturbed, and the landscape altered for all time, when the Royal Military Canal was built to deter Napoleon. One can imagine the teams of navvies working on the project, possibly using the church as a shelter or a place to store tools and belongings. The canal enabled Bonnington to become a port for a second time and coal and timber were carried from Rye to Bilsington and Bonnington to be taken by cart to Ashford. But what of the unofficial trade of the early 19th century? Was St Rumwold ever used as a temporary shelter for contraband when the Aldington gang and the Romney Marsh smugglers were at work?

So, who was St Rumwold and why was the church at Bonnington dedicated to him? He was born supposedly in 662 in Northamptonshire, the son of a royal house. Legend says that he spoke almost as soon as he was born and asked to be baptised. He lived only three days. Through mediaeval times Buckingham was the main place of pilgrimage to those dedicated to the baby saint.

In several religious traditions there are stories of amazing babies who speak. Hindus tell of the baby Krishna blessing his parents and The Koran tells of how Jesus spoke to his mother at the time of his birth. Was an early Islamic legend picked up by travellers and attached to an English baby to create a new myth? And might other travellers embarking from the old shoreline near Bonnington have relayed that myth to the local people? No one now knows, but it is fun to speculate.