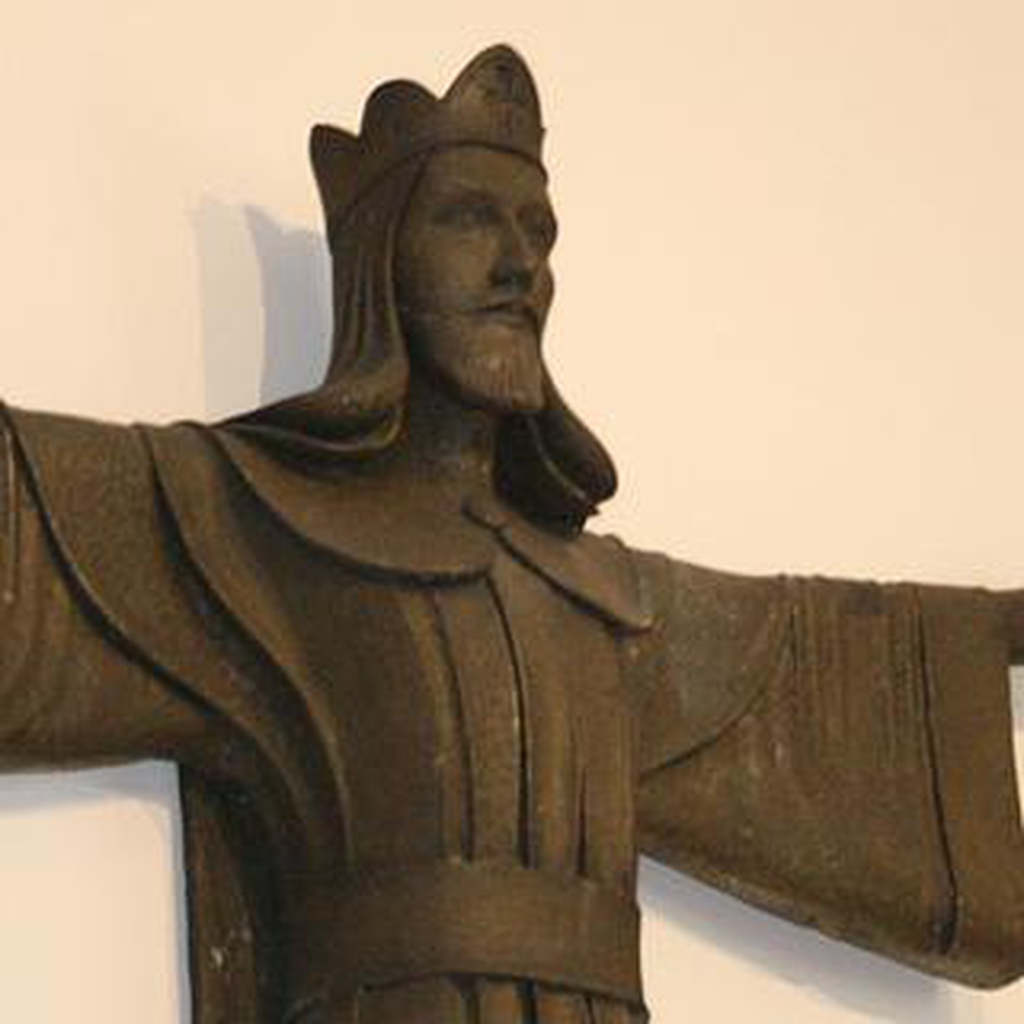 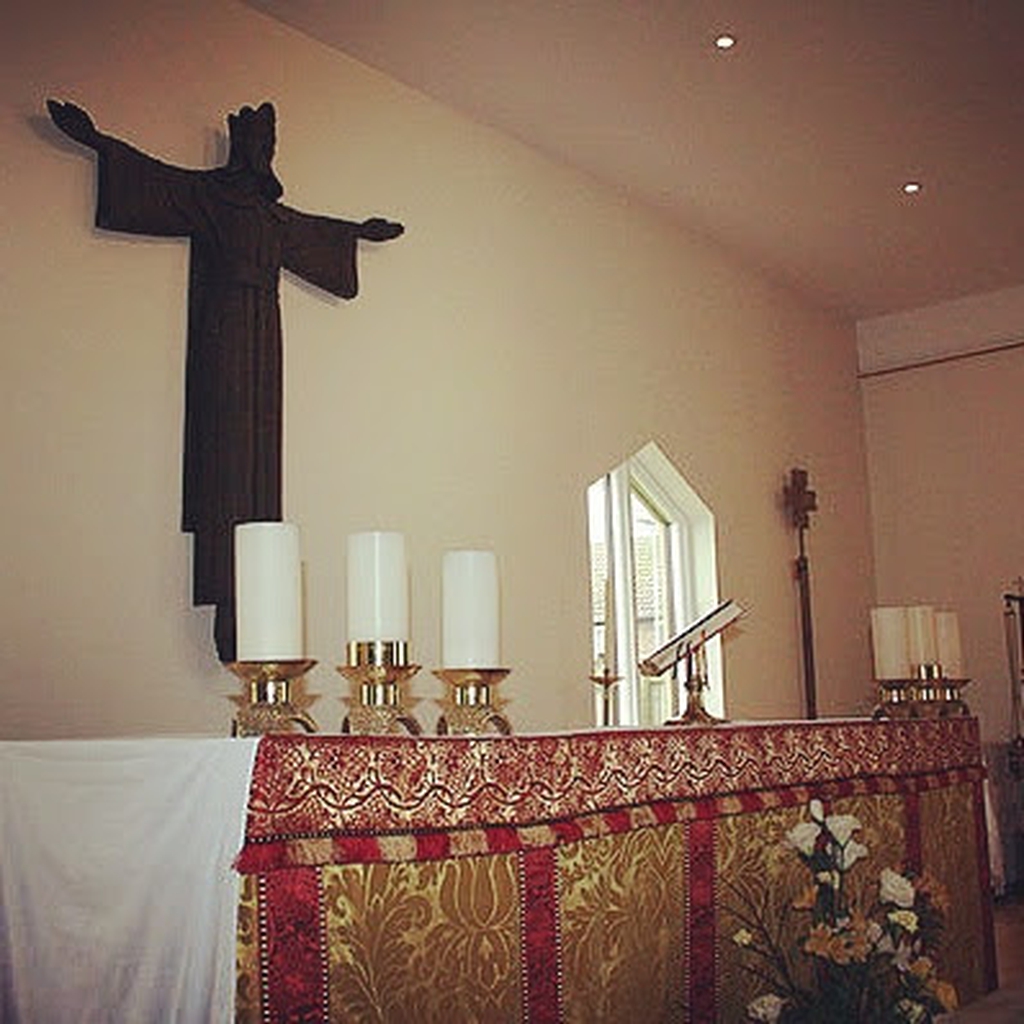 Our history has recently been updated written and updated by Sue Maxwell.  This has been published and is available via the church at a price of £3 - if you would like a copy please get in touch.

In February 1963 the foundations began to be laid of Christ the King Church, designed by Harold Wharfe of Newcastle University (who also designed Fountains Hall at Grey College). Most of the work was to be done by local parishioners, supervised by Father Bill Armstrong – in addition to a World Council of Churches work camp in 1965 – and many materials and equipment were donated or loaned by local businesses. The dome represented Christ’s crown of thorns.

The 50ft high fibre glass and steel camponile (spire) was erected in May 1963. It had been made in Blyth, Northumberland, and was pictured there by The Guardian on 31 March 1963. The foundations were completed in a year and the threshold stone, with the words “Friend, why do you come here?”, was laid by the Bishop of Jarrow on 5 May 1964 (the eve of St. John before the Latin Gate).

Three concrete downcomers on the church were moulded, on their three exposed sides: “63”, “1964” and “65”. The Youth Wing was formally opened on 13 March 1966. The copper dome had been finished but decoration and furnishing were still to be done, and there was no roof, when Rev. John Stringer arrived in 1966. According to K. L. Turns, the roof was eventually finished by Evode Waterproofing Systems, after the original supplier had gone out of business, but not to the original specification. It was now a reddish colour, not burnished copper… and soon leaked! The church was later to be known as “the pineapple church”, because of the roof, and Bowburn became “Rocket city” on Citizens Band radio, because of the spire. The new church did not open till 1978.

The church was described unflatteringly by Elizabeth Williamson, in a revised edition of Pevsner’s “County Durham”: “By Harold Wharfe of Newcastle University 1963-78. Designed to be built cheaply. Blank concrete panel walls, topped by a glass-fibre geodesic dome of an ugly rust colour which looks like a playground inflatable. Gimmicky free-standing spire-cum-cross. The interior is forthright and more acceptable, lit by triangular openings at the base of the dome. Sturdy furnishings and splendidly simple chancel decoration: timber boarding stained in rainbow colours to symbolise the post-Flood covenant.”

Christ the King was technically never actually a church, only a worship centre. As such, it (and the land on which it stood) belonged to the Parochial Church Council, not the Diocese. Decisions therefore on, for example, what furnishings etc. could be put in it, and how they were disposed of when the church closed, were up to the PCC, without permission being necessary from the Diocese. (Sources: Dur. Uni. Library DDR 4 March accession: box of service sheets etc.; Maureen Robinson; www.christtheking.bowburn.net/history. htm.)

In 1994 the then Arcdeacon of Auckland announced that the church, known locally as 'The Pinapple, must close. Some may say a blessing in disguise as the cost of maintenace was spiralling. However in 1997 the Christ Church was transferred to the Archdeconary of Durham and this paved the way to a change of heart on the future of the church building, as it had been the Archdeacon of Auckland that had ruled that there would be no funding for repairs or replacement. Later that year, the diocese announced that, if the congregation could raise the money, they could repair the church or build a new one: Christ the King Church was reprieved. (Source: CtK website, 9 June 04; Bowburn Interchange no. 5.)

After inviting architects to advise inregards to repairs it was decided that a new building would be more cost effective and in August 2001 planning approval was granted for a building designed by Malcolm Cundick of Alpha Architects.(Sources: City of Durham Council Development Contol Service; www. christtheking. bowburn. net/history. htm.) On 5th September 2004 the final service in the original church of Christ the King was held and the church was then closed. (Source: Durham Advertiser w/e 11 September 2004, p.5, Bowburn Interchange nos. 29 & 30.) Three years later 'The Pinapple' church was demolished.(Sources: Bowburn Interchange nos. 43 and 53.) and a year later in April 2008 Construction of the new Christ the King Church Centre began. Maureen Robinson, church warden, donned a hard hat and wellies before climbing into a mechanical digger to cut a giant ceremonial first sod. The Area Dean, Father Keith Lumsden, joined Father Mel Gray in conducting a short service. The church’s oldest parishioner, Mrs Ruth Harker, was photographed at the scene, as were the two youngest, Jack Armstrong and Ellie Grayson – both sporting hard hats.The building was constructed by NECHO Ltd of Sunderland.(Source: Bowburn Interchange no. 47.)

Finally, on the 13 September 2008 the Bishop of Durham, the most Reverend Dr. Tom Wright, and the Bishop of Beverly, the Right Reverend Martyn Jarrett, officiated at the opening of the new church of Christ the King at Bede Terrace/Prince Charles Avenue. With the Area Dean, Keith Lumsdon, and Fr. James Thompson, Fr. Mel Gray and Fr. Les Barron all taking a part in the blessings, the dedication was completed in “a beautifully simple ceremony”. Among those present were the Mayor and Mayoress of Durham, Roberta Blackman-Woods MP, Council and village representatives, Mr K. Dobson of Necho Ltd, the builder, and many who had helped with donations and gifts.

At the end of the service, the two Churchwardens gave a short speech thanking all who had helped. (Source: Bowburn Interchange no. 48.)