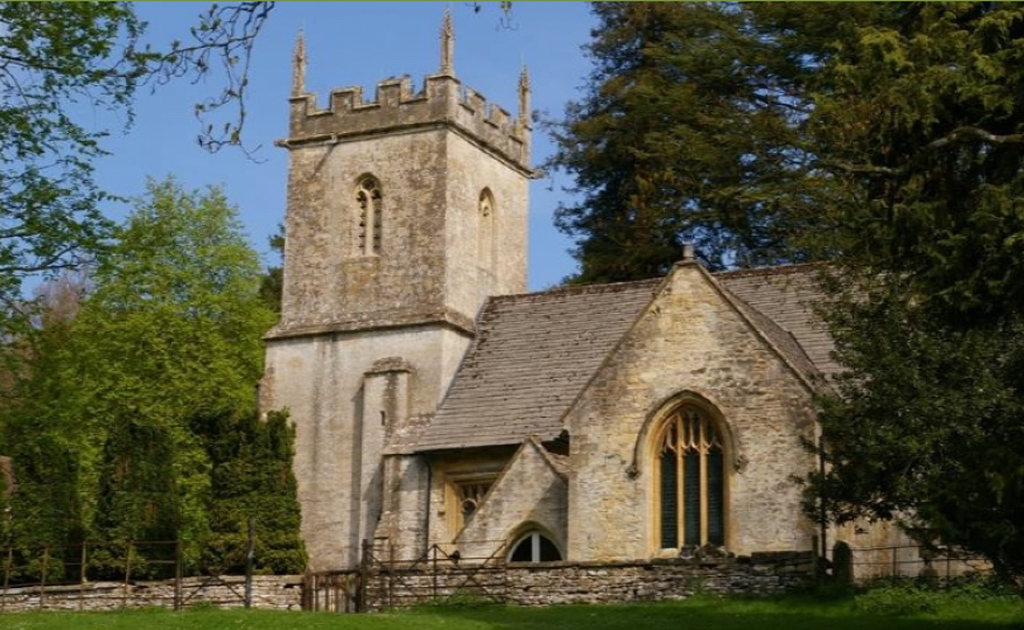 Colesbourne is a rural village situated halfway between Cheltenham and Cirencester on the A435 Colesbourne is a lively and sustainable village. It is recorded in the Doomsday Book without a church. In 1935 a siver coin of King Knut (1016 - 1035) was found four feet below the surface when a grave was being dug.  The ancient St James Church, dates back to 1050 and Rectors can be traced back to 1250. Over the centuries the church has been subject to many alterations culminating in 1850 with remodelling in the Victorian style. Old features remaining are the base of a 12th century preaching cross, the 14th century roof timbers of the south transept (which also seems to have served as a side chapel), the rare 15th century “wine glass” pulpit and font and the five bells all cast in 1719 by Abraham Rudhall of Gloucester. The church is situated on the edge of an arboretum and close to Colesbourne Park about a quarter of a mile from the centre of the village. The Church seats 90 and has a heating system and a recently restored organ. The ring of bells, all cast in 1719, were rehung in a modern frame in 2001. There is a first class C of E village school at Coberley three miles away and an hourly bus service to both towns. It is a traditional Estate village of 115 adult inhabitants and around 12 children under 15 years. Approximately two-thirds of the dwellings are let on assured shorthold tenancies, the remainder being larger 4-bed owner occupier houses, including one big tenanted working farm with farm house and three other tenanted farms and two owner occupied farms. There are approximately 900 acres of managed woodlands around the village. The village has a pub with restaurant and nine rooms, another restaurant, a filling station/shop/post office and a number of other small businesses offering up to 40 full time and part-time jobs. Social activities include a fortnightly pub quiz with around 60 participants and an annual village fete in aid of the Church (raising £2,000). In 2012 more than 300 people attended a Bonfire, Barbeque and Firework Display on Penhill for The Queen’s Diamond Jubilee and £500 was raised for the Royal Agricultural Benevolent Fund. There is no village hall but the Long Room at Colesbourne Park is usually available for social functions and the Colesbourne Estate Office for meetings for up to 12 participants. Colesbourne Park Snowdrop Collection, probably the largest in the UK, attracts 6-8,000 visitors over the month of February. Ten day jobs are available at weekends and up to 200 visitors take lunch at the Inn or Restaurant on Saturdays and Sundays and up to 50 per day on many week days. The teas on Open Days raise £6,000 - £8,000 for Gloucestershire charities.