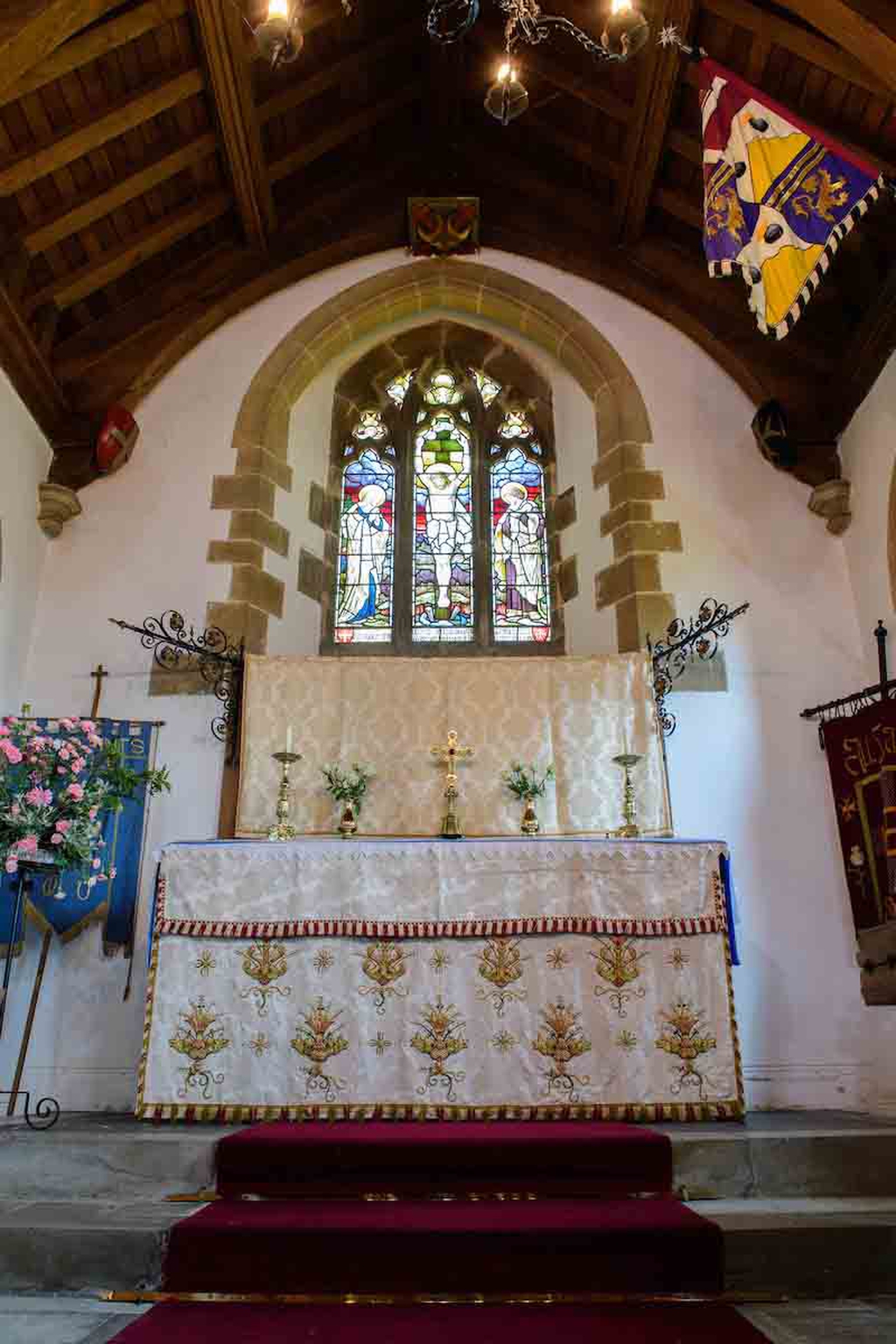 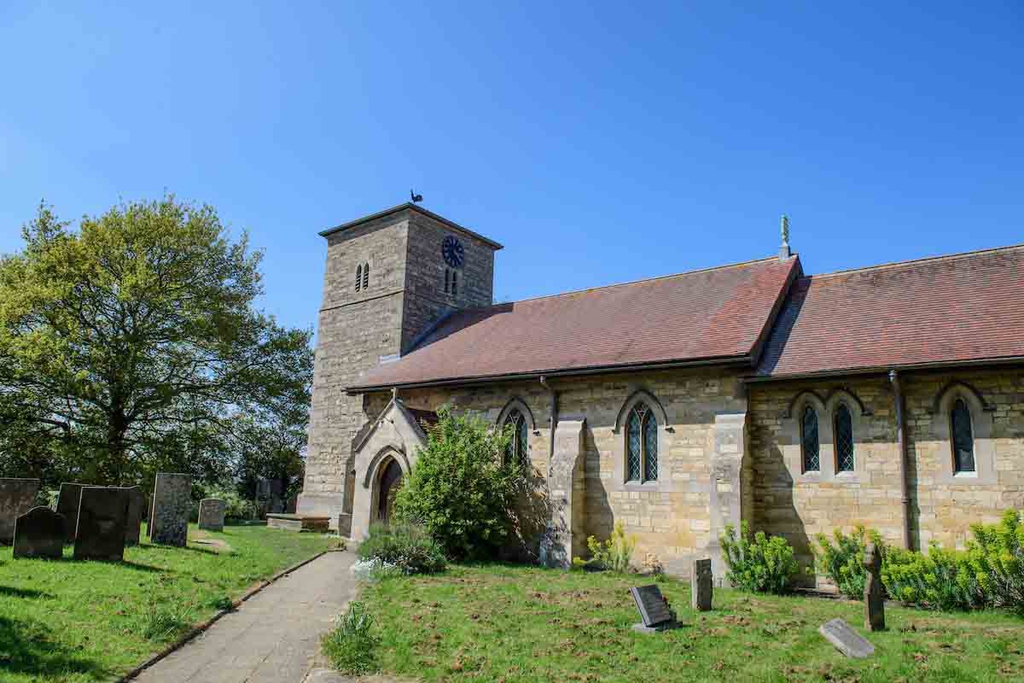 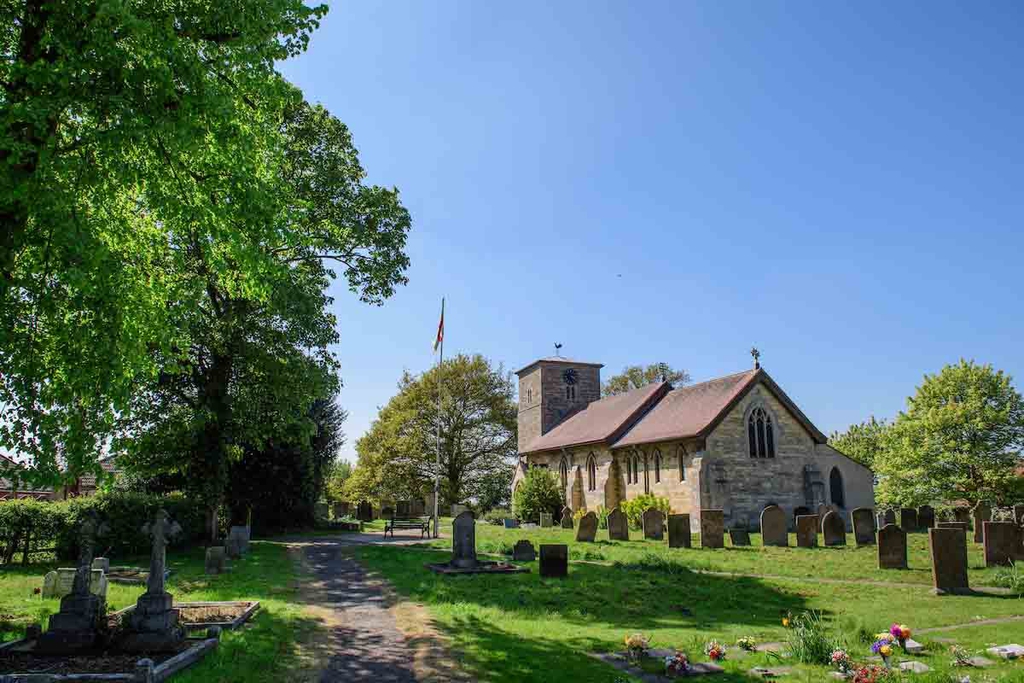 There has been at least 3 churches standing on this site, prior to the one here today. Apart from the tower,which dates back to Norman times, this church was rebuilt by J.T.Lee of London in 1903-4.The inscribed foundation stone is in the East wall. Before that the main body of the church was in such a state of disrepair that no single item of of the building or furniure could be used again, so all but the tower had to be demolished.The Order of Saint John of Jerusalem contributed £50 towards the rebuilding, and King George V (then Prince of Wales), as Grand Prior of the Order gave £10. More than £2,000 was raised to provide a worthy building.The Registers date from 1588.

The Font is of the Norman Period. There is a peal of Six Bells. The original 5 bells were restored and a new tenorbell added, and dedicated on September 14th 1946 to mark the end of World War Two.

On the roof of the church over the chancel is placed a Maltese Cross.The clock on the tower was formerly in St. Mark's Church, Lincoln.The Avenue of Lime Trees was a gift and was planted in 1926.

The Memorial Arch was erected in memory of eight men who lost their lives in the 1914-18 war, and was unveiled by Lord Monson, Knight of Justice, on May 1st. 1920. The two carved figures on either side of the Arch represent, on the left a Knight Templar, and on the right a Knight Hospitaller. The sculptor was Mr. A.J.Tuttell of Lincoln.

The Knights Templar was an Order founded in 1118 by Baldwin the Second, King of Jerusalem, to protect and assist the poor pilgrims to the Holy Sepulchre. The connection with Eagle began when King Stephen (1135-1154) granted to the Templars "The Manor of Eykel" to establish an infirmary for the sick of the Order and a home for aged members. The buildings were at Eagle Hall, chosen in preference to the village because of its woods and fish ponds, so necessary to a half-monastic house. Henry the Second (1154-1189) granted to  it the churches of Eagle, Swinderby and Scarle.

The Order of Saint John of Jerusalem, or Hospitallers, was founded in Jerusalem in1048 with a monastery, chapel and hospital for pilgrims and the sick, situated near the Holy Sepulchre. In 1323 what was left of the property of the Templars was transferred, under the Pope's order, to the Knights Hospitallers. Thus after some two hundred years in the possession of the Templars, Eagle passed to the Hospitallers, who kept it for about the same length of time. The Preceptory of Eagle, as the Templars called it, became the commandery of the Hospitallers, ruled by the Grand Prior. The Office of Bailiff of Eagle was one of the four Grand Crosses in England and ranked third in seniority of the Order, below the Grand Prior. To this day The Order of Saint John still  hold occasional services in Eagle Church.