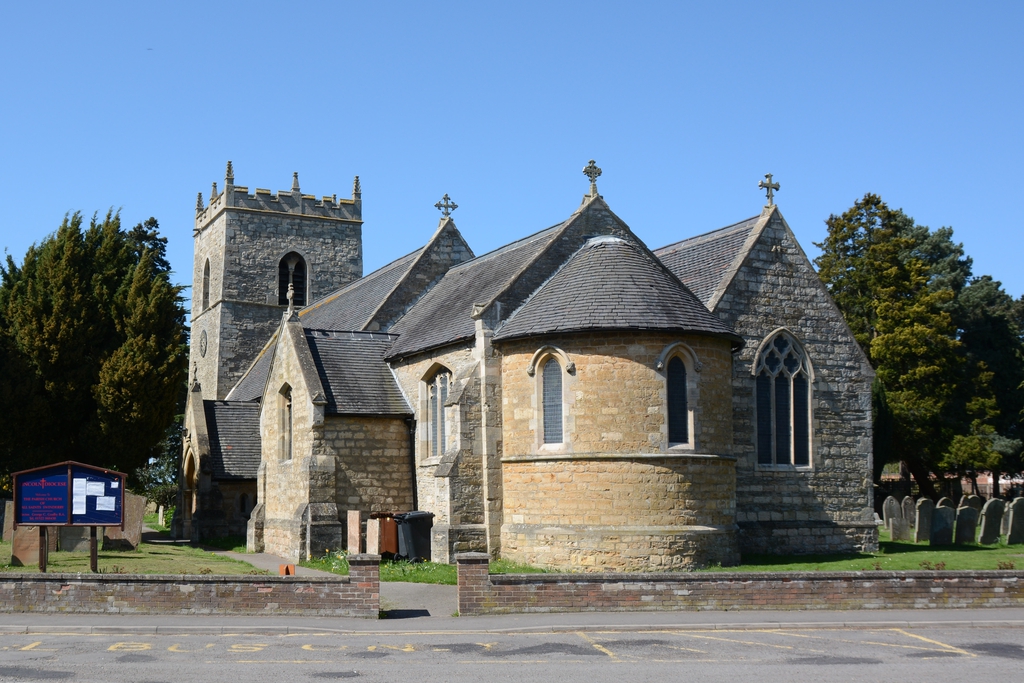 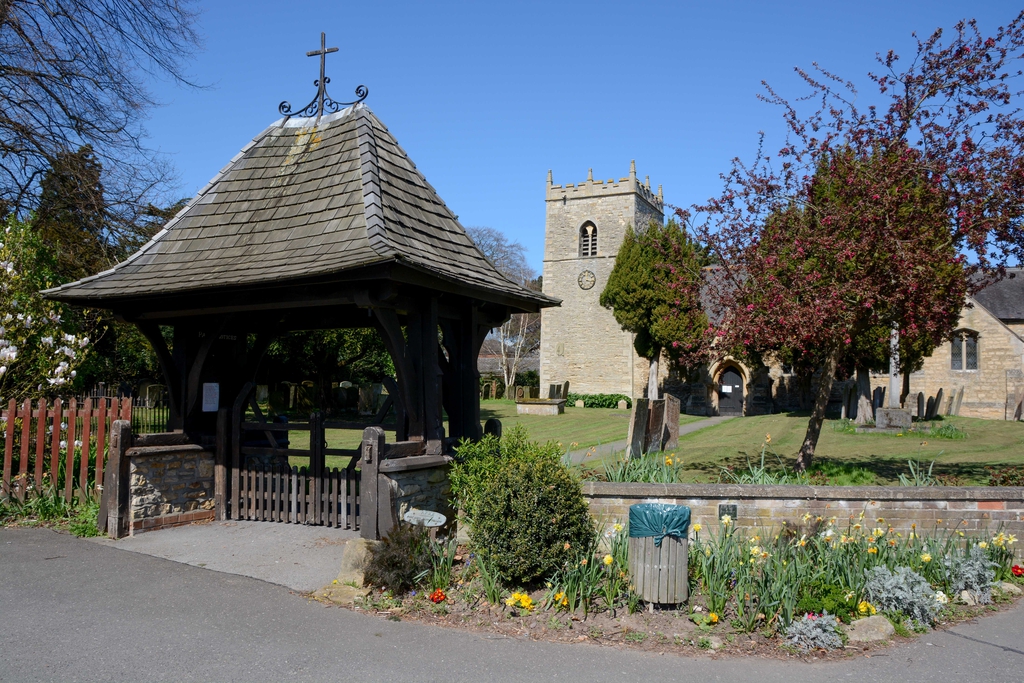 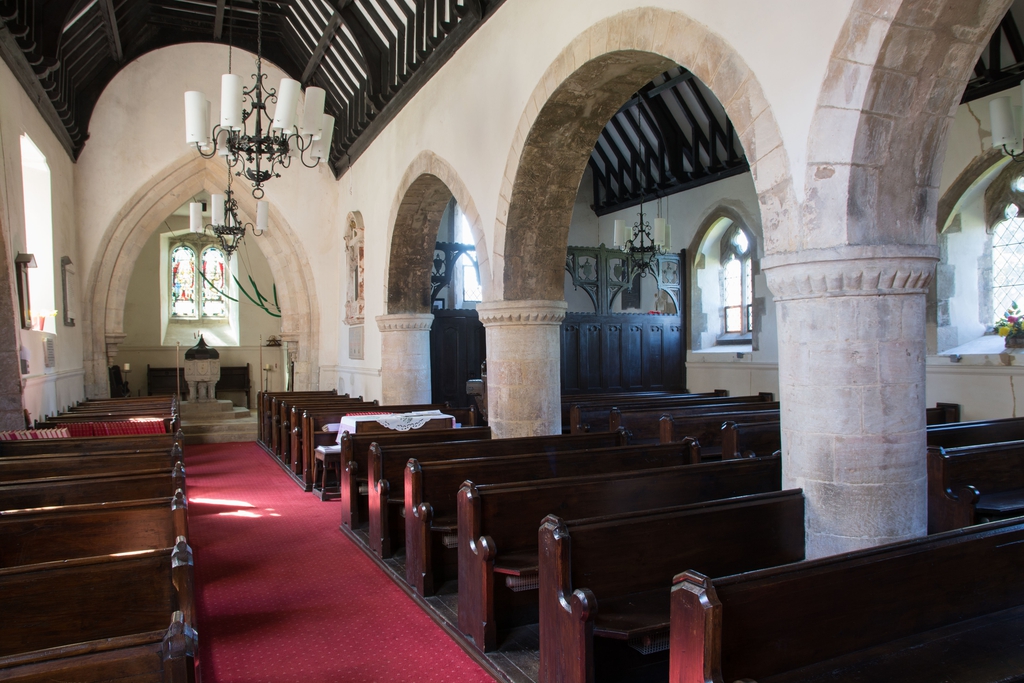 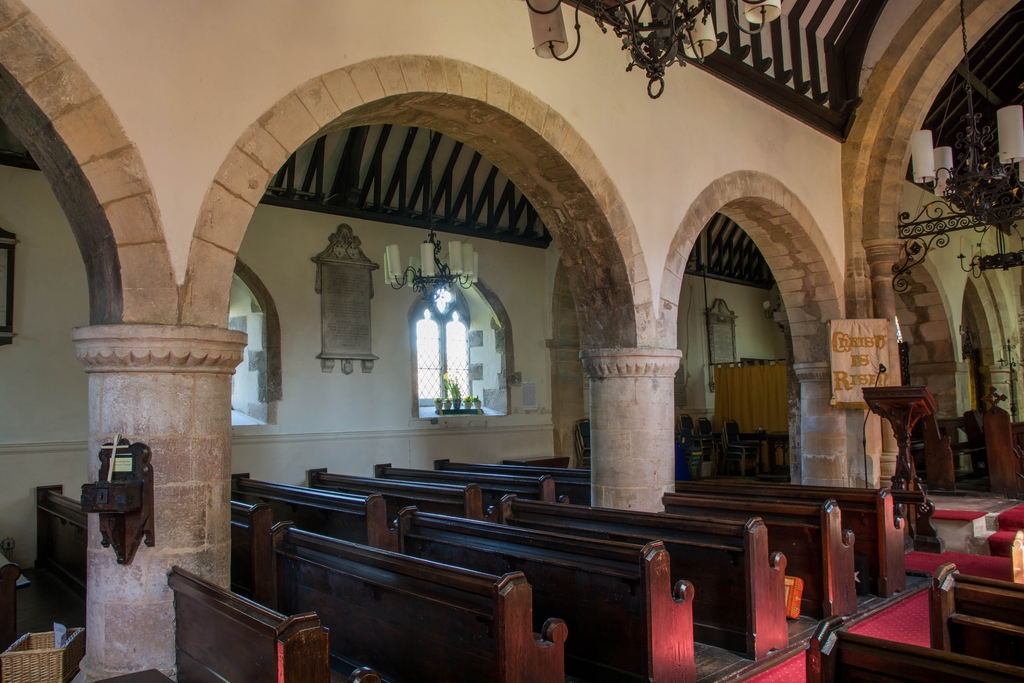 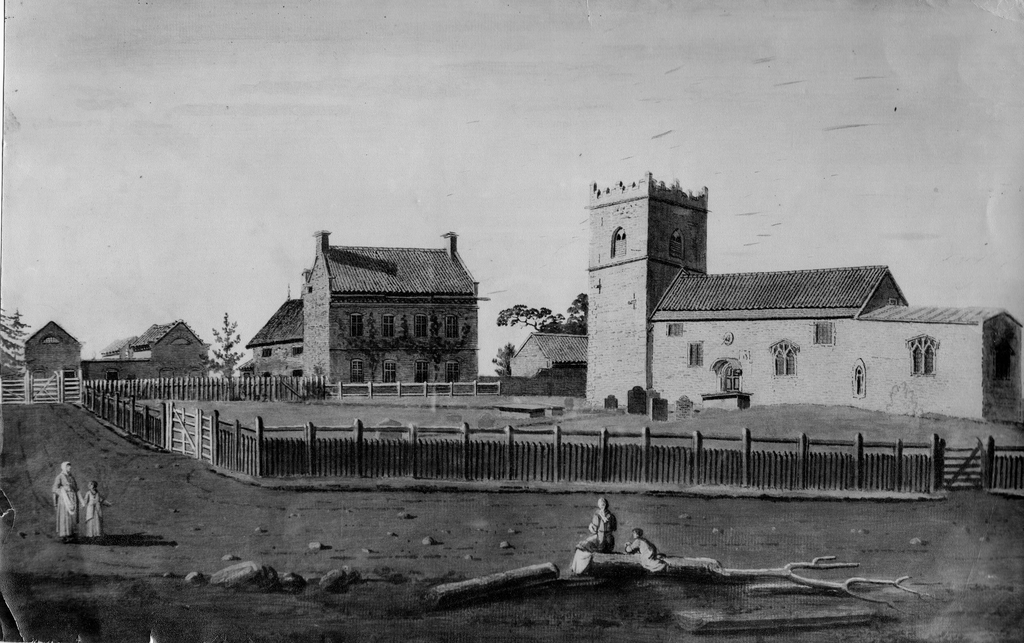 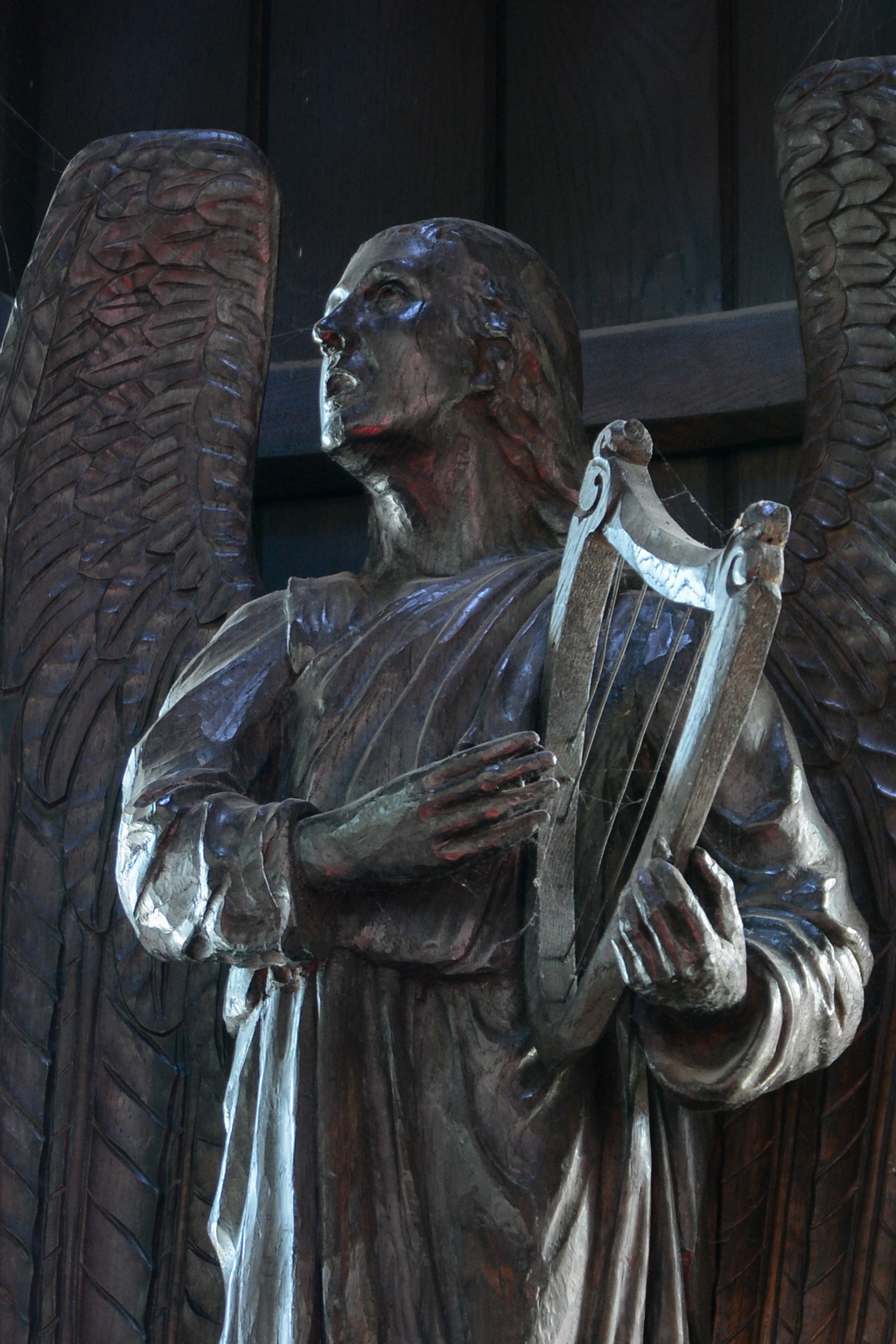 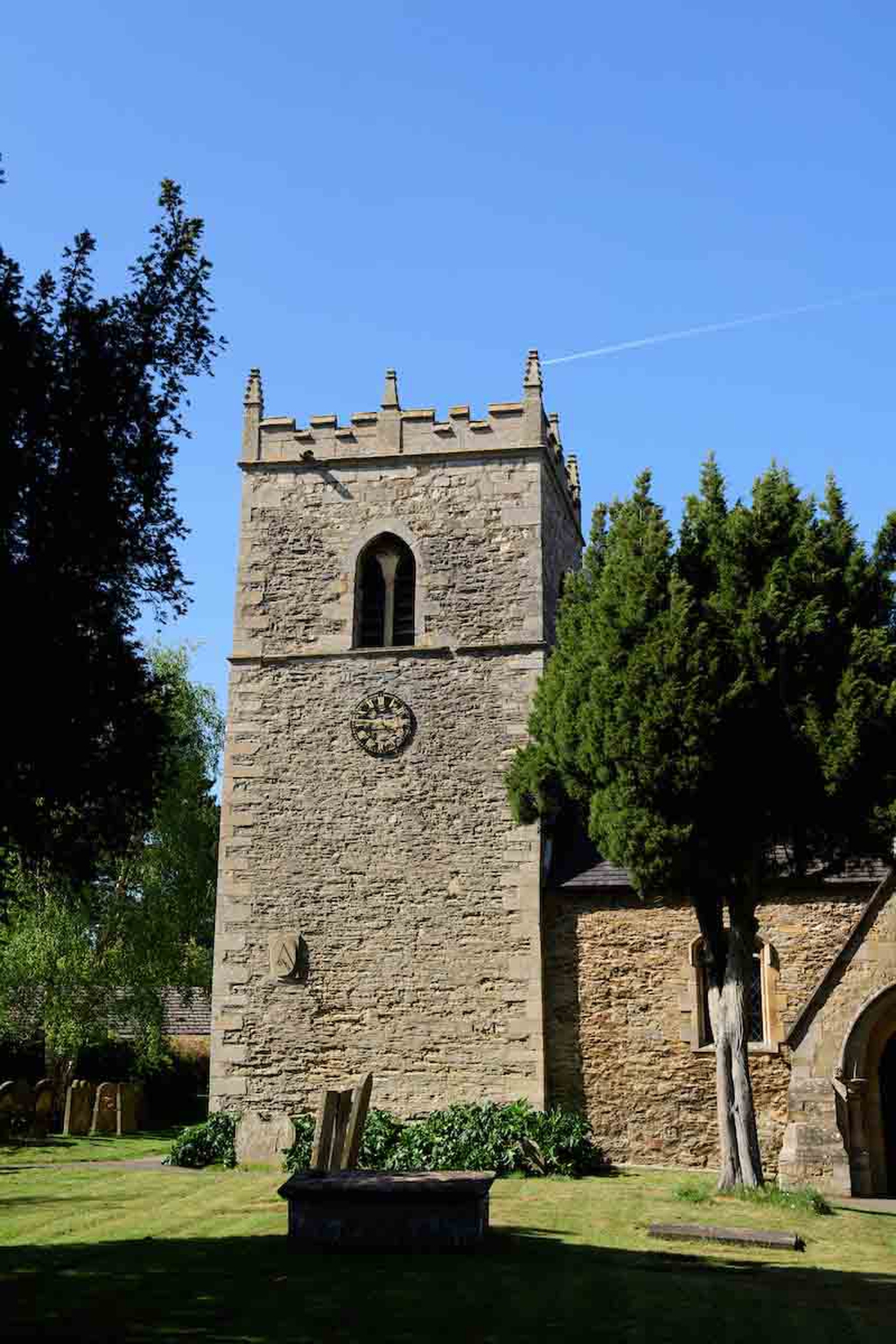 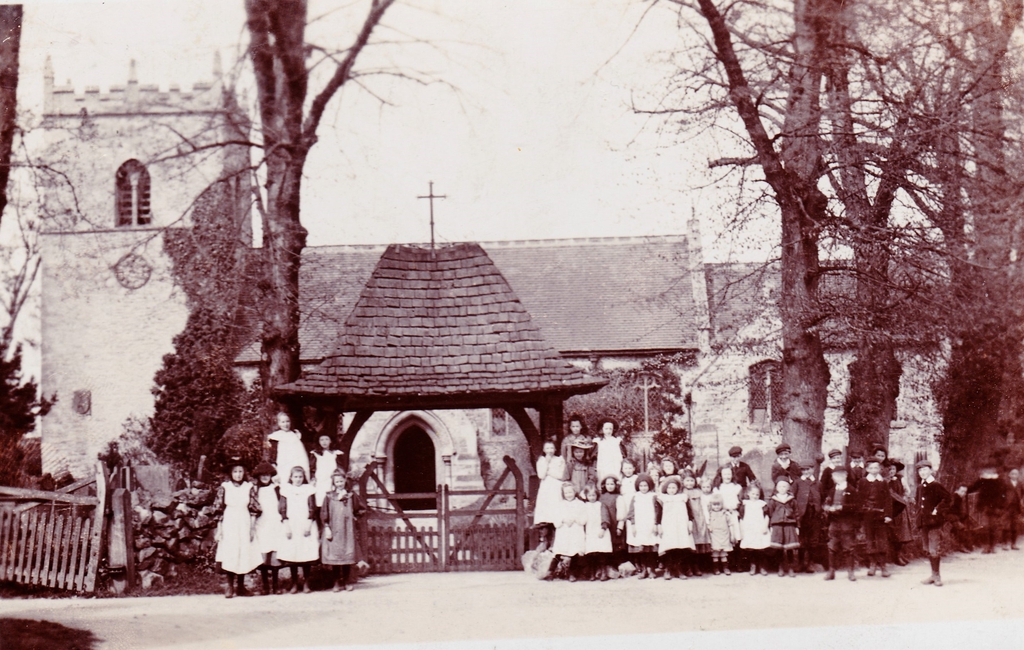 A Brief History of Swinderby Church

The present building dates from the twelfth century. It has evolved over the years to reflect the needs of the community and yet still evokes continuity with the past. Externally, the tower and substantial parts of the south wall of the nave are all that remain of the original buildings.

Internally, the earliest standing fabric is Norman. It includes the three- bay north arcade, which would have replaced the original north wall when the first alteration was made to the church in the late twelfth century when a narrow northern aisle was added. A fourth Norman arch, just visible in photograph 4, may have connected the chancel to a small chapel. On the pillar opposite the door there is a mark, probably made by the stone mason responsible for these changes. This original aisle was replaced in 1854, when the present extension was built, but the Norman arches and pillars remain intact.

Also dating from the Norman period is the piscina (photograph 5) now to be found in the rounded apse built in 1879. A piscina is a stone bowl built into the wall to allow the priest to wash his hands as well as the sacred vessels.

The corner  stones (quoins) on the outside of the west tower suggest it was once freestanding, thereby providing refuge for villagers in times of danger. The pointed arch (photograph 6) connecting the tower to the nave (the main body of the church) dates from the thirteenth century. It was during this period that the tower may have been, for the first time, permanently connected to the nave.

There are five bells in the tower, the earliest being the tenor, which was most likely cast by Robert Newcombe of Leicester circa 1550. Below the bell ropes in the tower is the octagonal style font (photograph 7) dating from the fifteenth century, and is perpendicular (circa 1335–1530) in style.

On the south wall of the tower there is a list of incumbents, starting with Hugh in 1220.

A visible fragment of medieval wall painting survives on the south wall; at one time many of the walls would have been extensively decorated.

Some of the windows in the south wall date from the fifteenth century, with others being added at a later date. The fifteenth-century east window was moved to the south wall of the chancel in 1879 when the rounded apse was added.

At the entrance to the church, and clearly visible from the inside, is a tall rounded arch (photograph 8). Local tradition suggests this opening may have al-lowed knights and others on horse- back to enter the church, either physically or symbolically.

All Saints Church underwent extensive renovations in the nineteenth century. In 1854, changes initiated by the Reverend R. W. Clark included the rebuilding of the north aisle and the building of a new chapel at the east end of the north aisle. This is now known as the Morton Chapel. A memorial in the Morton Chapel commemorates members of the Disney family buried close to this spot.

The Disney family arrived as soldiers of fortune with William the Conqueror and were given lands in Lincolnshire. They prospered as landlords and farmers, and the village, Norton Disney, on the opposite side of the A46, bears their name. The family purchased land in Swinderby in the sixteenth century and organised the enclosure of Swinderby in the seventeenth century.

The vicar of Swinderby from 1779 to 1782 was the Reverend John Disney. He disagreed with the established Church and omitted the litany and creed from his services for over 10 years. He eventually resigned from the Church of England in 1782 and became a minister in the Unitarian Church in the Strand, London.

In 1739, the Reverend John Drake wrote that the vicarage was very old and in a decaying state. With the permission of the Church he replaced part of the original building with rooms and chambers approximately 12 yards in length fronting eastward onto the churchyard.

A painting by the Yorkshire artist George Cuit (Snr) in 1778 clearly shows the eastward-facing new vicarage and perhaps shows part of the original building in the background, and the numerous outbuildings. This painting was undertaken at the request of the Reverend John Disney. He later had the vicarage extended, which included adding a study. As a consequence, in 1806 the painting was copied in monochrome and updated by the same artist. (Photographs 9 and 10)

Notes in the church state that in 1956 the original painting was in the possession of a Frederick J.P. Disney.

Both paintings show the rounded Norman arch above the door in the south wall, the tower and the fifteenth-century windows, which still exist today. The small narrow window looking into the nave at the east end of the church would have been used by lepers to enable them to participate in the service but not enter the church.  The felled trees at the front of both paintings may indicate that the artist removed the trees blocking his view of the church and surroundings.

The eighteenth-century vicarage was replaced with a new building in the nineteenth century.

The London-based architect J. E. Lee was responsible for much of the building works undertaken in the late nineteenth century under the tenure of the Reverend C. K. Long. It remains an intact example of the architect’s work and developments included the addition of the organ chamber and the apse. The chancel arch was also enlarged. The total cost of these renovations was £480 with the public raising £350 and the Reverend Long making up the shortfall.

The organ was made by Marten and Taylor of London in 1880. The pulpit, lectern and reading desk are all late Victorian, and the detailed carvings on these items and elsewhere are all excellent examples of the fine craftmanship of this era. The figures (photograph 11) in the rounded apse were carved by a Miss Long, daughter of the Reverend C. K. Long.

A Brief History of Swinderby Village.

The first firm historical evidence of the existence of Swinderby comes from the Domesday Book of 1086, where it was recorded under the jurisdiction of Eagle. In the twelfth century, King Stephen (circa 1092–1154) granted the Manor of Eagle to the military-religious order the Knights Templar. Soon after, Henry II (1135–1189) also granted the Knights Templar the churches of Eagle, Swinderby and North Scarle. The order had previously established an infirmary for the sick and elderly nearby at Eagle Hall, where traces of earthworks still survive today.

On the Pope’s orders in 1312, the Knights Templar were disbanded and stripped of their land and other assets. Hence, in 1323 the manor and Rectory of Swinderby were transferred to a new order, the Knights Hospitaller. A period of stable ownership followed, until they too were disbanded. In 1544, on payment of a fee, the manor of Swinderby was given to Richard Disney (D’Isney) of Norton Disney and William Ryggs of Clerkenwell, London.

In 1628, Richard’s grandson, Sir Henry Disney (1569–1641), started the enclosure of 929 acres of common land and 1180 acres of moor and waste land. The enclosure of this land was completed by Sir Henry’s son, John. He also built several cottages for the poor and gave those who lived there graz- ing rights at nominal rents along the lanes and on 20 acres of land. Most of the land and the cottages were eventually sold in the late eighteenth centu- ry and the money was used to establish a Poor Trust which still operates for the benefit of parishioners today.

In 1771, listings by the Reverend John Disney (1746–1816) reveal that the village at that time hosted two blacksmiths, one butcher, 17 farmers, three wheelwrights, one weaver, one schoolmaster and three publicans. The total population of the village was 224, and it wasn't until the mid-nineteenth century that this grew to over 500. The 2011 census recorded the population of Swinderby Parish at 648, with only one public house (The Plough) on the High Street.

The present school was built in 1849 and replaced the original school room at the far end of the High Street. The old school room became the village’s reading (and events) room for a period, while the schoolmaster and his family continued to live in the adjacent schoolhouse well into the twentieth century.

The building became less important in the 1920s, when an officers’ mess was brought from Newark, re-erected and used for 50 years as the village hall, named by locals as the ‘Victory Hut’. The first extension to the village hall was built in 1977, with the original building being finally demolished in 1990 when another extension was constructed.

Built early in the nineteenth century, the vicarage is now a residential school for children with severe learning difficulties or challenging behaviours. Other than the church, the oldest building in the village is believed to be Manor House on the High Street, dating from the late seventeenth century. There are a number of other listed buildings in the village, including the signal box at the station.

The first Methodist chapel was built in the village in 1824 on land which had once been a small orchard owned by a Mr. Wilkinson. This was re- placed by the present building, in 1869, when it was possible to enlarge the chapel because of further land acquisitions.

RAF Swinderby, on the opposite side of the Fosse Way, was first operational on 14th September 1940 when Polish airmen flew to attack a target at Boulogne Harbour. In 1942, RAF Swinderby started to focus on training recruits and by March 1943 there were over 3,000 personnel based at the station. After the war it continued to train recruits until its closure in 1993.

Three plaques located near the entrance to All Saints Church list not only the 79 parishioners who served during World War 1, but also those who made the ultimate sacrifice in both World Wars. These were: