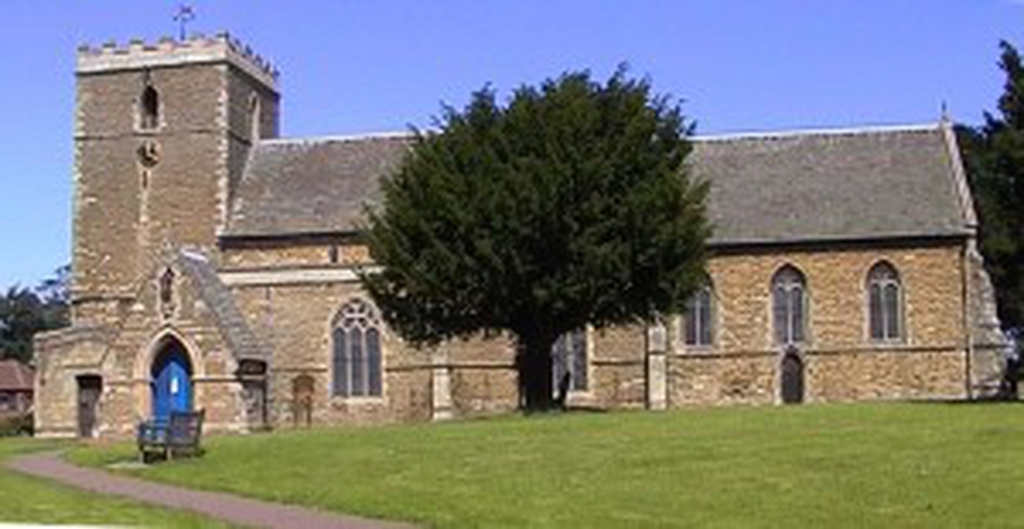 It is very likely that there was a Saxon church at Burton though there is nothing remaining that is obviously from that period. However, the exceptionally wide south aisle may have had pre-1066 origins. Rough foundation stones at the foot of the south wall could be Saxon, creating the possibility that the aisle once formed the entirety of a pre-conquest building.

In 1115 the church was given by its Norman owners to the newly founded Augustinian Priory of St Mary, Runcorn which was later moved to Norton in Cheshire. St Andrew’s remained in Norton’s possession for most of the the next four hundred years, until the priory was dissolved by Henry VIII.

The North arcade is the only substantial example of Norman work. The arches are pointed and seem to belong to the Transitional period but the decoration is typical earlier Norman. The mouldings are irregular and do not follow a perfect line which suggests that the three western arches may have originally been round and the stones reused (rather awkwardly) to produce pointed arches. Note the strange long-snouted creature on the top moulding of one arch. Jarvis suggested that this was a “carver’s freak” though it probably served some superstitious purpose of the masons. Inserted between two of the North arcade arches is the figure of a clean-shaven, curly-haired man triumphing over a great toothed beast trying to drag him into the flames of hell. The figure possibly represents St John with a theme taken from the Book of Revelation.

In the south porch is what is described by Nicholas Pevsner as “a good example of an Early English doorway with three orders of shafts”. This is the only decorative detail left from this period – about 1300. The South Aisle with its typically plain Early English arches and pillars was constructed about a century after the north aisle was built.- about 1250. In later medieval times the use of chantries became common. In these, prayers were said to help the souls of the wealthy deceased in their passage through purgatory. Jarvis records that there were chantry priests connected with St Andrew’s who probably used the south aisle as the chantry chapel..

In the middle ages sedilia, or priests’ seats, became fashionable. Burton probably received its beautifully carved triple sedilia in the 14c. On the cusps of the arches are curious carvings in the form of “Green Men” (painted purple here!). These were pagan fertility symbols which found their way into many churches. The sedilia covered up a priest door which was never replaced until the 19th century, though it is still visible from the outside on the 1794 drawing by John Nattes. The new door became known as the rector’s door.

Richard Wright became Vicar in 1532 after Henry declared himself head of the Church. He had been the appointee of the Augustinians at Norton and obviously remained a monk at heart – he was given permission to wear his monk’s habit under his vestments. After Mary Tudor became queen, Richard Wright refused to acknowledge Papal supremacy and was deprived of his living the following year. His successor Miles Widder seemed to have no problem with swapping loyalties, for he remained safely in office long after Elizabeth I restored Protestantism. After the Dissolution of the monasteries St Andrew’s passed from Norton Priory to St Peter’s, Westminster. At about this time the Vicar of Burton was paid a salary of £9.00 per annum, his two curates £4.00 and twenty shillings respectively.

The Sheffield family have had great influence in the church (as well as the locality) since Edmund Sheffield, Earl of Mulgrave – who distinguished himself in the Battle of Armada – received the patronage in 1589. When the lineage became extinct in 1735 the Normanby estate and church patronage passed to the illegitimate Charles Herbert who later took the name Charles Herbert Sheffield. Charles was later awarded the hereditary title of Baronet. Sir Reginald Sheffield today is the eighth baronet and also patron of St Andrew’s. Two of the Sheffields, one of them a Baronet, became vicars of St Andrew’s. The motif adopted by the Sheffields is a Boar’s Head. The Sheffields were responsible for many of the alterations and restorations in the church over the last two centuries. There are numerous monuments and plaques dedicated to the family, the most impressive being the monument to the first baronet and his family in the chancel by Fisher. The oldest monument to the Sheffields is an effigy of a knight in the Easter sepulchre on the north wall of the chancel. This was transported from West Butterwick, the ancestral home of the Sheffields. Sadly during the move the knight lost both of his legs.

The present nave roof dates from the 1860s when it was raised several feet, supported on new foliated corbels, to provide space for clerestory windows. At the same time the south aisle roof was changed from a steeply sloped lean-to to a shallow pitched roof to allow light into the new clerestory windows. In the same decade the chancel was restored in memory of the 4th Baronet. The present ornate wooden roof and parquet sanctuary floor were also provided. During these alterations the carved angels painted with the emblems of various saints were erected.

As part of the above alterations the chancel arch was replaced. In the 1880s further changes were carried out in the chancel, this time in memory of the 5th Baronet. The choir screen, oak altar and oak choir stalls were installed

The Vicar’s vestry or sacristy on the north side of the church was added in the 19c. The Choir vestry, on the south side of the tower was built in 1937 in memory of Canon Francis Amcotts Jarvis.

This was erected in 1910 as a memorial to Laura Sophia Sheffield.

The oldest glass is the beautiful 18c window in the west wall of the South Aisle. It depicts Jesus as “Rector Orbis” (Ruler of the World). In the same Aisle is the Creation window, 1987, by the acclaimed artist Anthony Holloway. The window in the base of the tower aisle depicts Ruth gleaning in the fields and was donated by the farmers of the parish in 1845.

In 1533 it was written that “Burton-on-ye-hyll possessed 3 great bells”. In 1920 these were recast and three new bells added. The final two bells were hung in 1937 – dedicated to Canon Jarvis – bringing the total to eight.

There had been a market at Burton since before the Conquest. A plaque on the west face of the tower exterior records a charter granted for the market in 1315 by King Edward II.

The Royal Coat of Arms

Elizabeth I decreed that all churches should display the monarch’s coat of arms and this practice continued for the next 200 years. At St Andrew’s the coat of arms is hung above the vicar’s vestry door. This is the coat of arms of George III and – as it includes the Fleur-de-Lys symbol – dates from before he gave up the traditional claim of English monarchs to be overlords of France.

Rev Charles Sheffield had presented a two manual (plus pedals) organ to the church in 1867 at a cost of £200. In 1889 a chamber was built onto the east of the north aisle into which the organ was placed. Then in 1909 the organ was replaced by the present three manual instrument, made by Norman and Beard of Norwich, at a cost of £740. It was extended in the 1980s and is now reckoned to be one of the best smaller church organs in the county, regularly used for recitals.