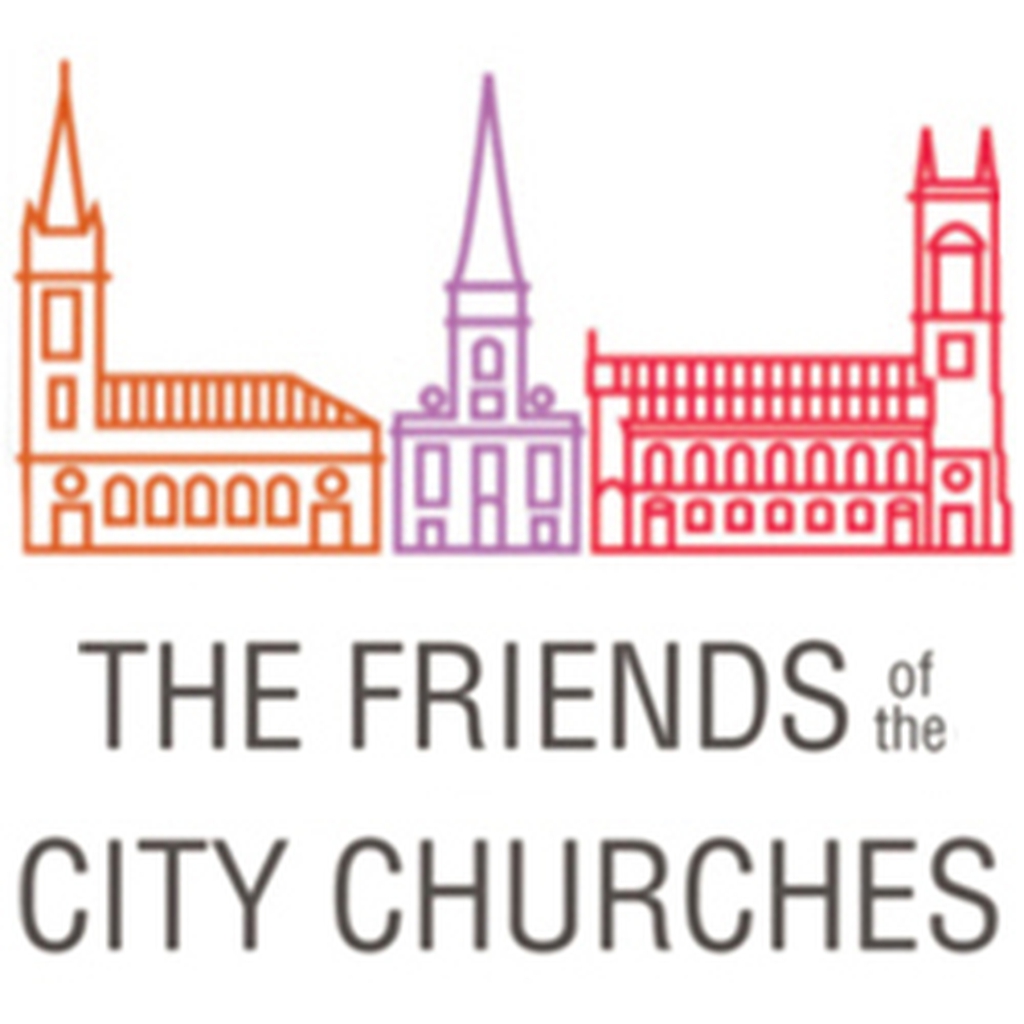 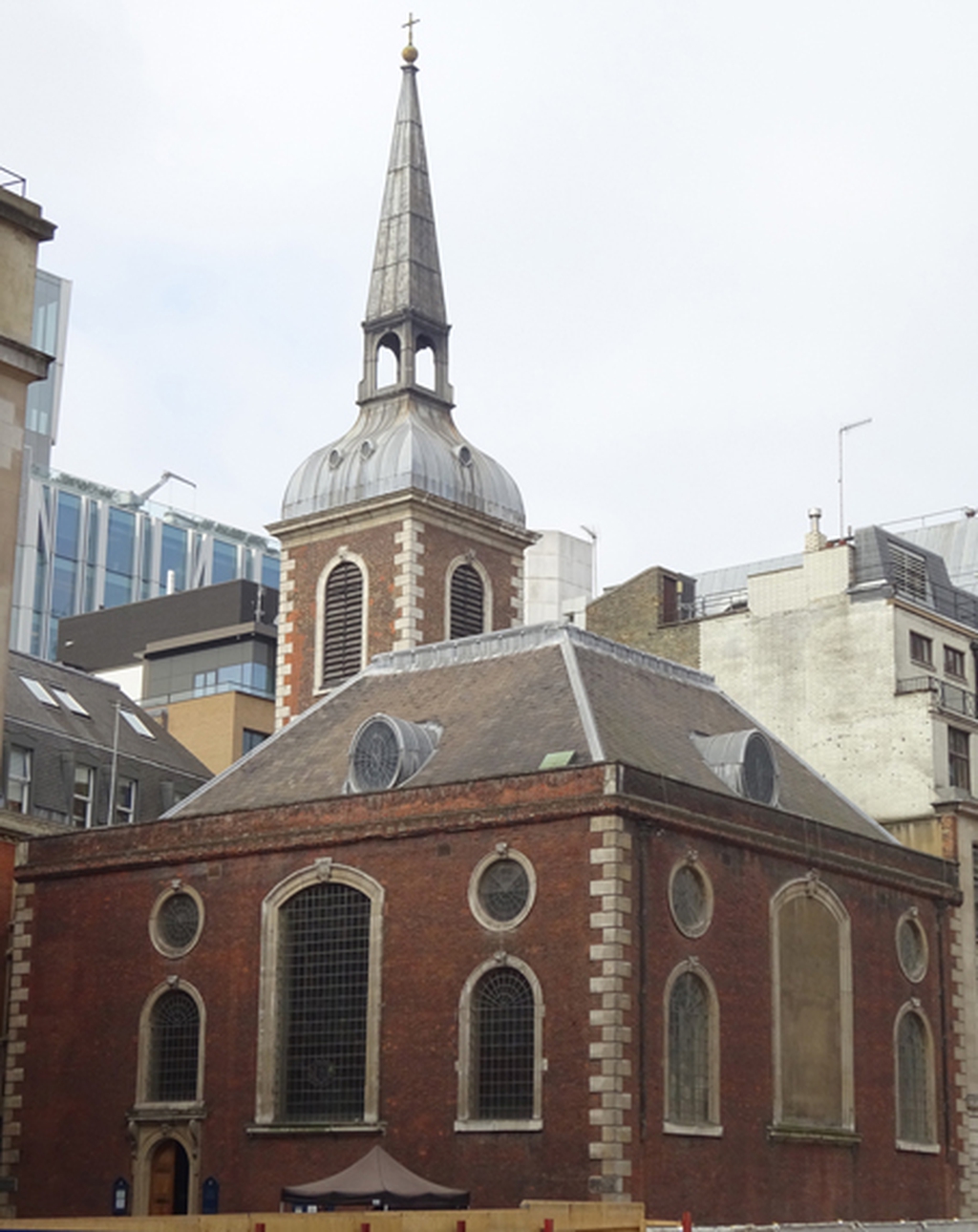 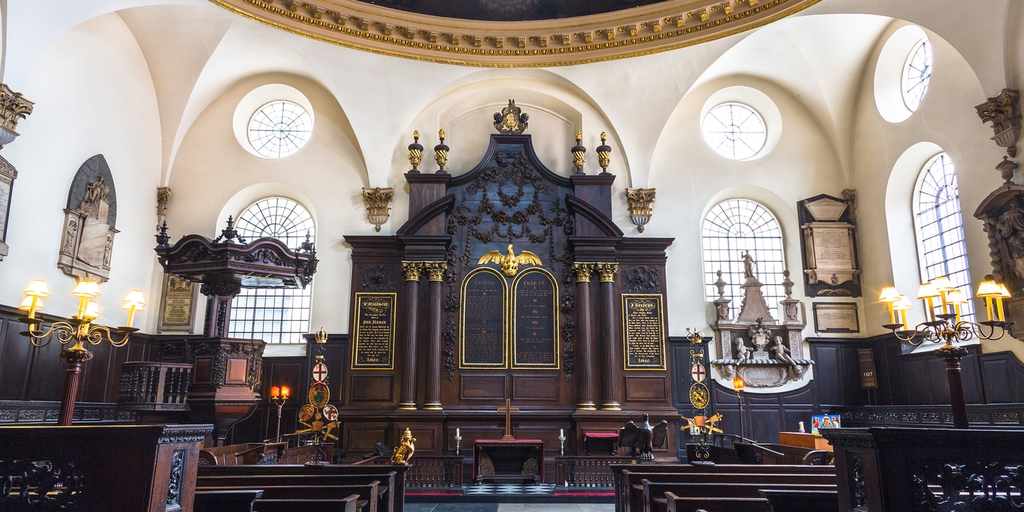 St Mary Abchurch is one of Sir Christopher Wren's finest parish churches. Set back from the bustle of Cannon Street, in Abchurch Yard off Abchurch Lane, it is a haven of quiet for reflection and prayer.  Please see 'Opening Times' on the 'Find Us' page for current details.

The first recorded mention of St Mary Abchurch dates to the late 1100s. The church is dedicated to the Virgin Mary, as were at least 15 others within the City of London; the determinative 'Abchurch' may refer to its position ('up' church, although it is not conspicuously higher than any adjacent ground), or the name of an early priest or patron. The medieval building was destroyed in the Great Fire of 1666, probably around midday on Monday, September 3, as the fire spread from Gracechurch Street to the Royal Exchange. With the whole of the City to rebuild, work on the church only began in 1681, under Sir Christopher Wren and his office, and was completed in 1686.

Despite a few minor alterations, and some damage during World War II, the church has changed little over the centuries. The splendid painting within the dome, by parishioner William Snow (fl. 1699-1724), was added in 1708; it depicts the worship of heaven, with the tetragrammaton (the Divine Name in Hebrew characters) in the very centre, The chief glory of the church is a magnificent reredos (altar screen) with swags of fruit and flowers by the master carver Grinling Gibbons (1648-1721), the only authenticated work by his hand in the parish churches of the City.

Gibbons also carved the gilded ‘pelican in her piety’ at the top of the reredos. Another pelican, originally the church's copper weathervane, now stands above the north door. This complex symbol refers to the ancient belief that the pelican fed her young with her own blood, as Christ feeds believers with his Body and Blood in the Sacrament of the Eucharist. The pelican is thus also the symbol of Corpus Christi, Cambridge, which held the advowson (right of appointing clergy) for St Mary Abchurch from 1568. Over the next 400 years, most of the rectors were educated at that college, so a third pelican appears on the post-war rectors' board (the gift of the carver, Mr Barham) on the west wall. That list begins with the first recorded, 'Luke the Supervisor' in 1323. The former north door now leads to the rectory room added in 1914-15; as an office, this has been the home of the Friends of the City Churches, a heritage charity devoted to the preservation of the historic churches of the City, since May 2014.

Although the church never suffered a direct hit, collateral damage from adjacent wartime bombing caused considerable damage to the painted dome and destroyed stained glass windows as well as the original organ. The present organ case of 1717 came from All Hallows Bread Street, which was demolished in 1878 to reduce the number of under-used churches as London's population shifted from the City to a ring of new suburbs. An ill-fated plan for an air raid shelter in Abchurch Yard, immediately in front of the church, revealed long-sealed medieval burial vaults at the beginning of 1941.

Most of the church's treasures were removed or protected shortly after the start of the Blitz in September 1940, so the original pulpit and tester (by William Grey), marble font (by William Kempster), and wooden font cover, royal arms and carved doorcases (all by William Emmett), survive along with many fine monuments. Chief amongst these commemorates Sir Patience Ward (1629-1696), Lord Mayor in 1680. The rather small communion table actually predates the church, as it was made c1675 by Almandy Howart for a temporary 'tabernacle' while the congregation was waiting to rebuild after the Great Fire. The church also has two fine sword rests, commemorating vintner George Scholey, Lord Mayor 1812-13, and confectioner Samuel Birch, Lord Mayor in 1814-15. After many years of work, the restored church was reconsecrated on 6 June 1957.

Under the City of London Guild Churches Act of 1952, St Mary’s ceased to be a parish church, and its territorial parish was joined to that of nearby St Stephen Walbrook. As a guild church, St Mary Abchurch now holds its weekly Church of England service at lunchtime on Wednesdays, and welcomes a guest congregation on Sundays – currently, a monthly service by the Chaplaincy to Russian Speakers in the Diocese of London.

SAFEGUARDING: The guild church of St Mary Abchurch is committed to the safeguarding of children, young people and adults. We follow the House of Bishops' guidance and policies and have our own Safeguarding Officer(s). The Diocese of London’s safeguarding pages contain vital links and information including contacts for the Diocesan Safeguarding Advisor (DSA) who advises our Parish Safeguarding Officers (PSOs). If you are concerned that a child or adult has been harmed or may be at risk of harm please contact the DSA. If you have immediate concerns about the safety of someone, please contact the police and your local authority Children or Adults' Services.