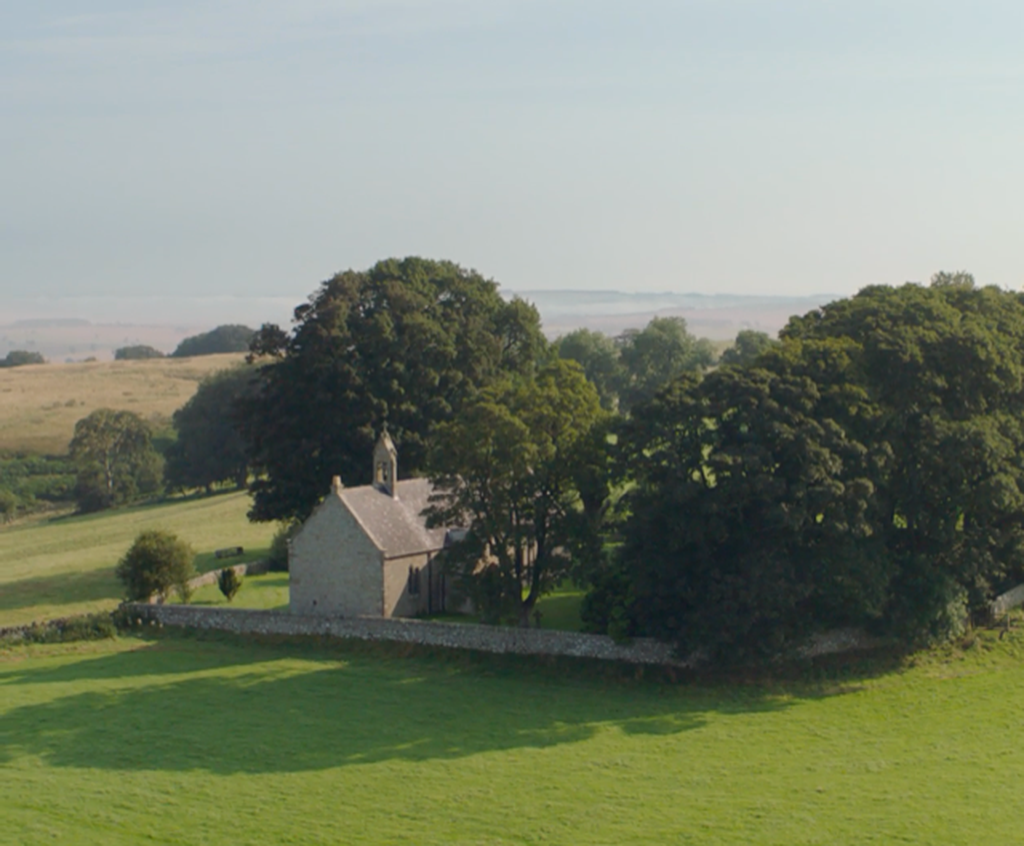 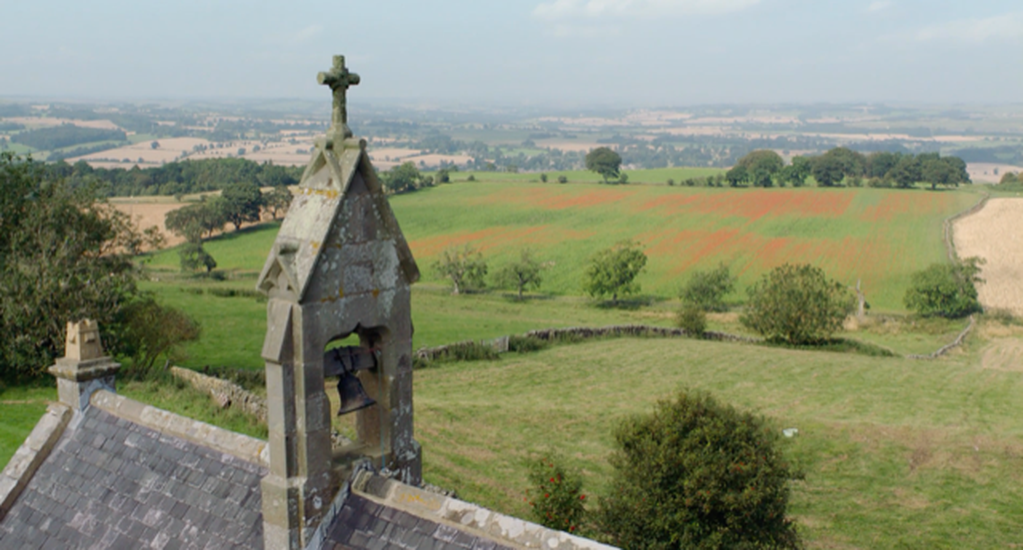 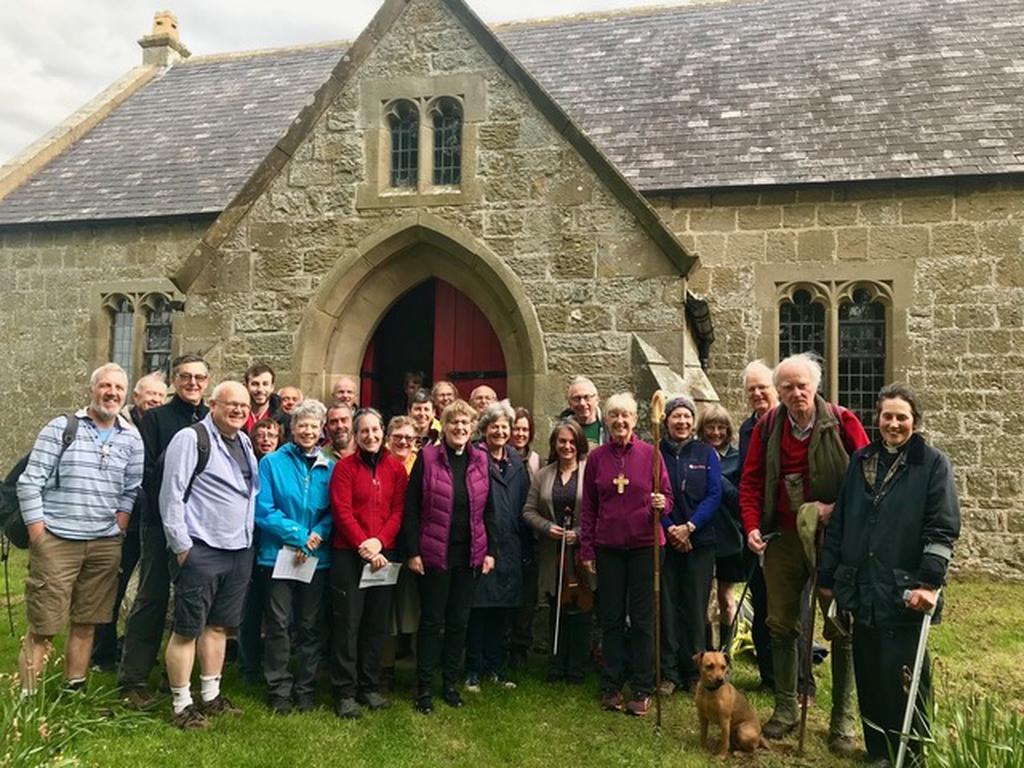 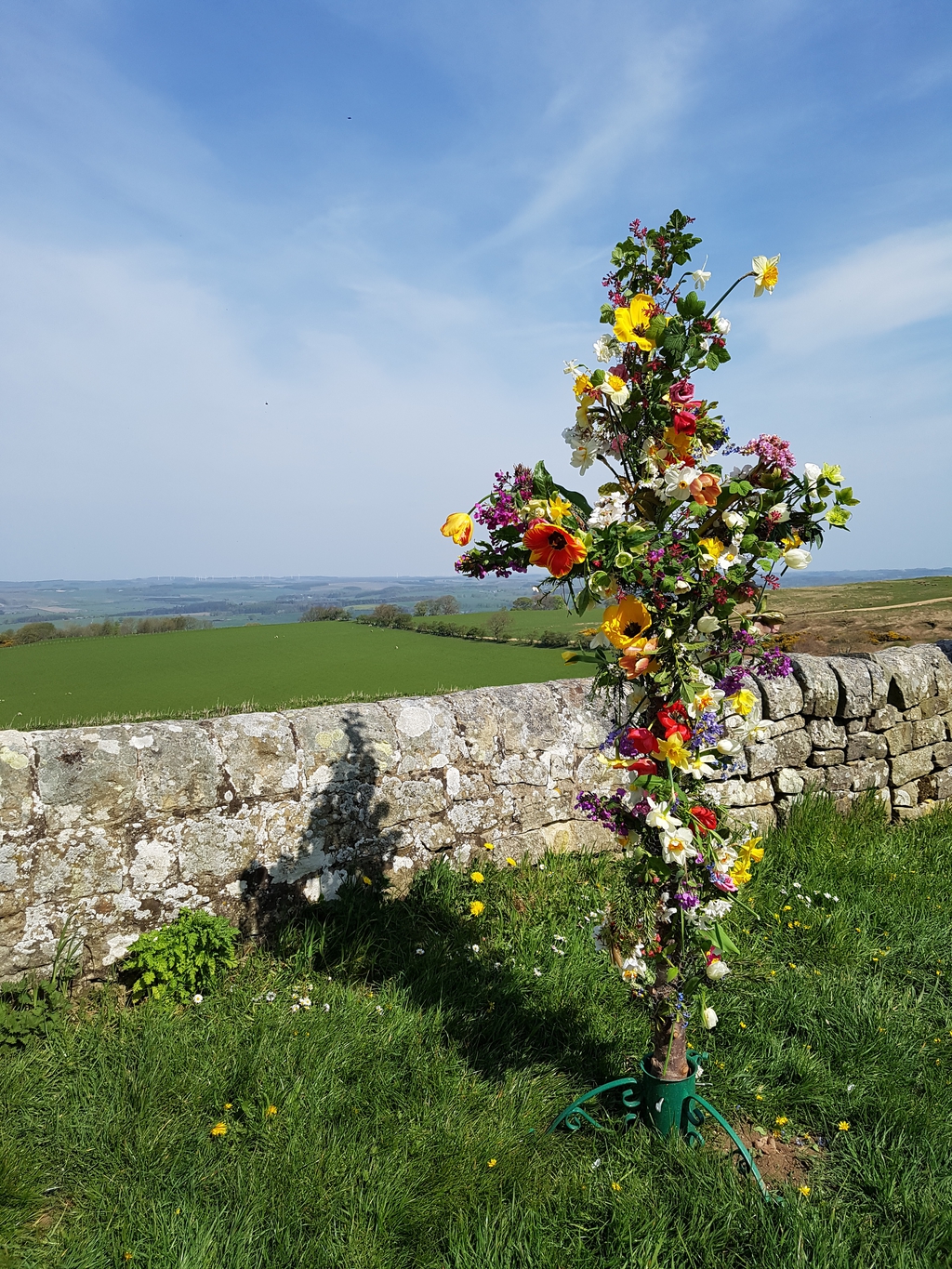 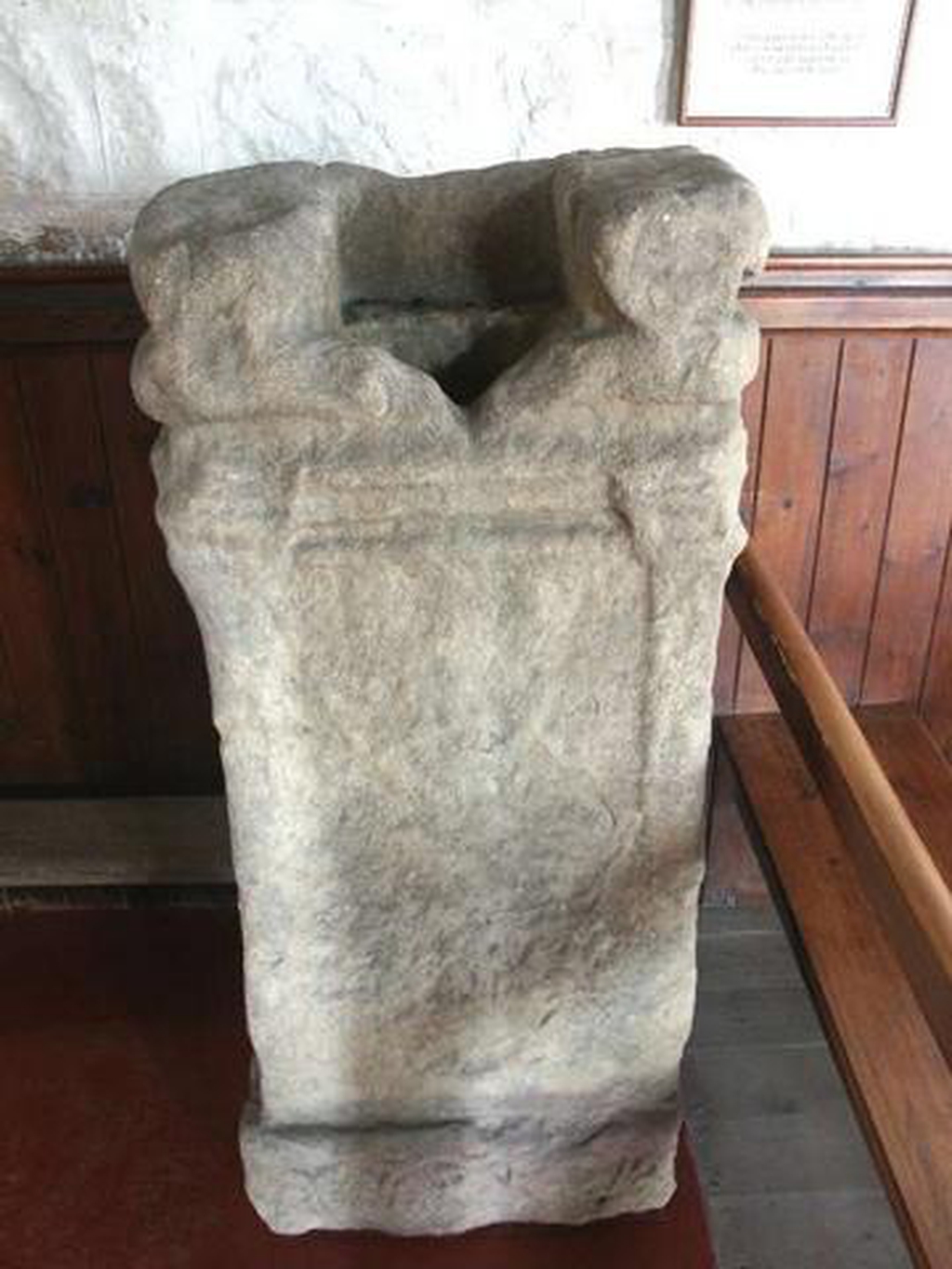 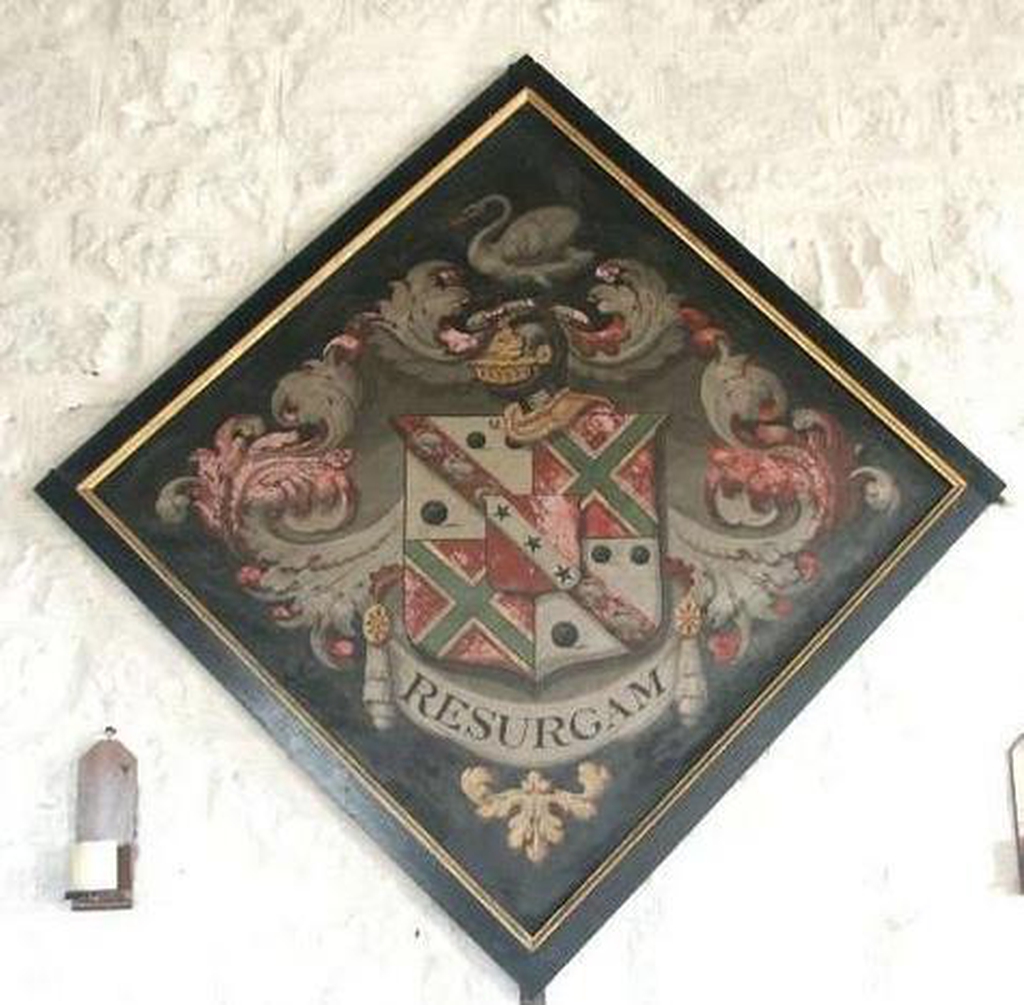 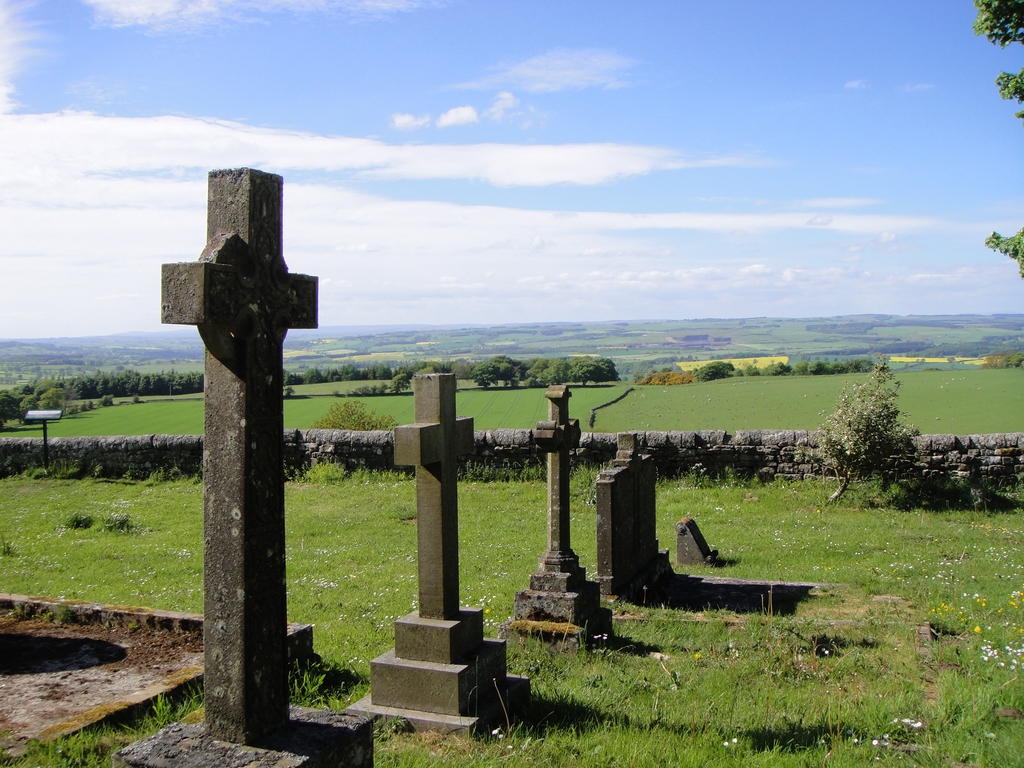 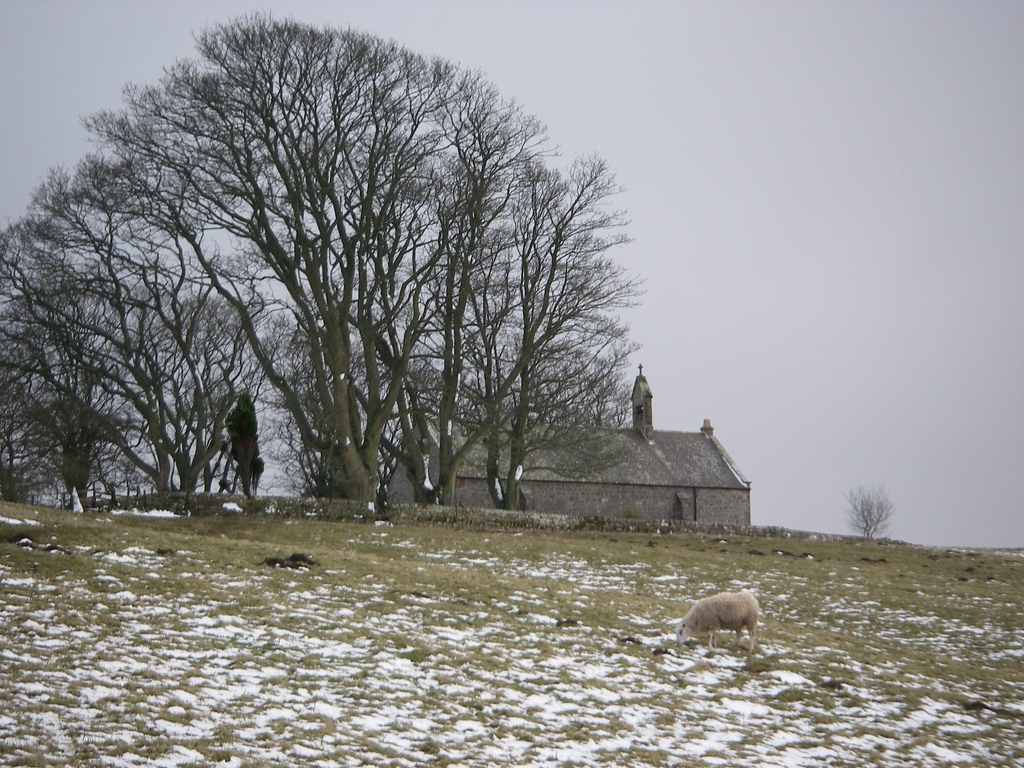 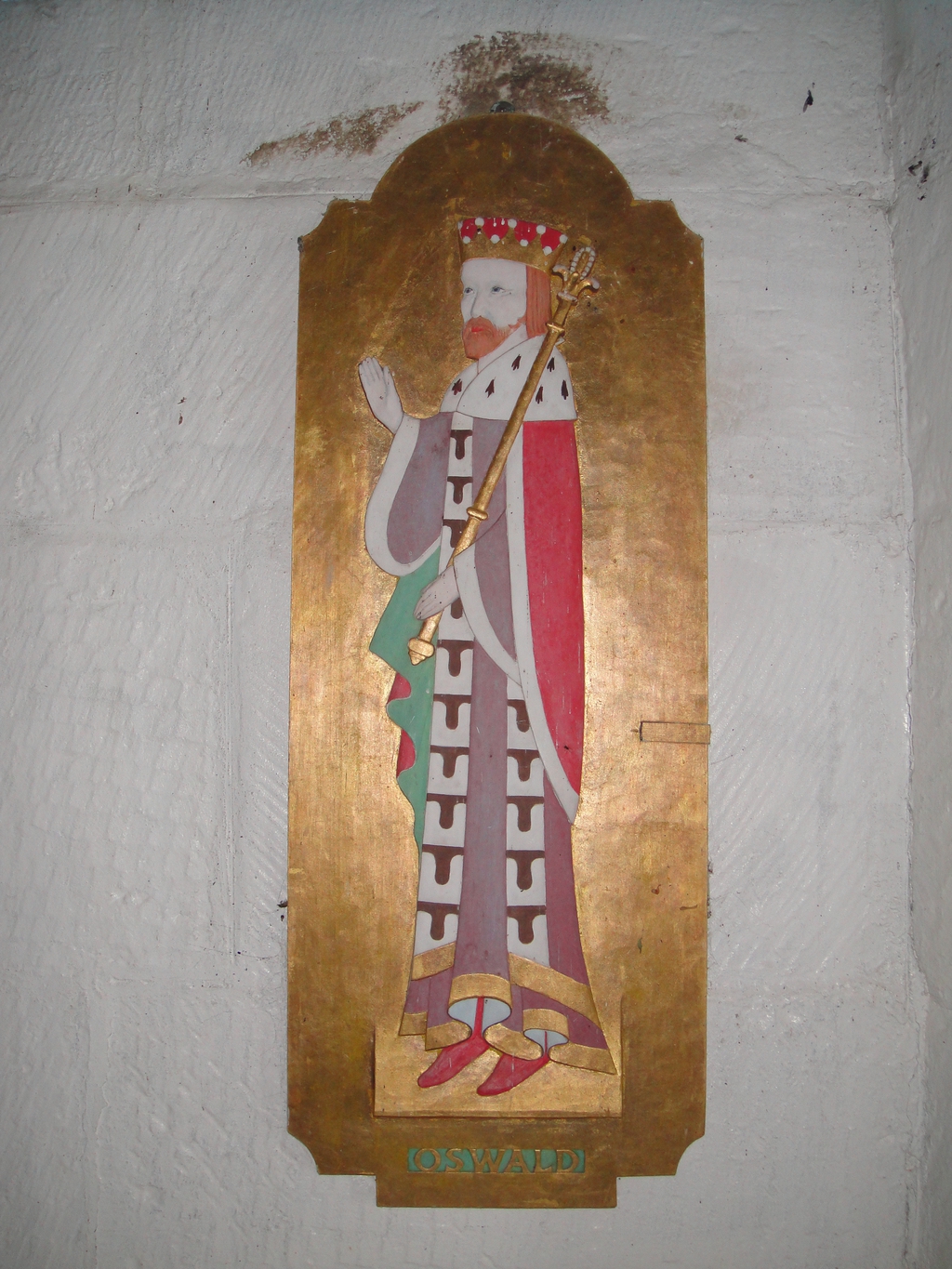 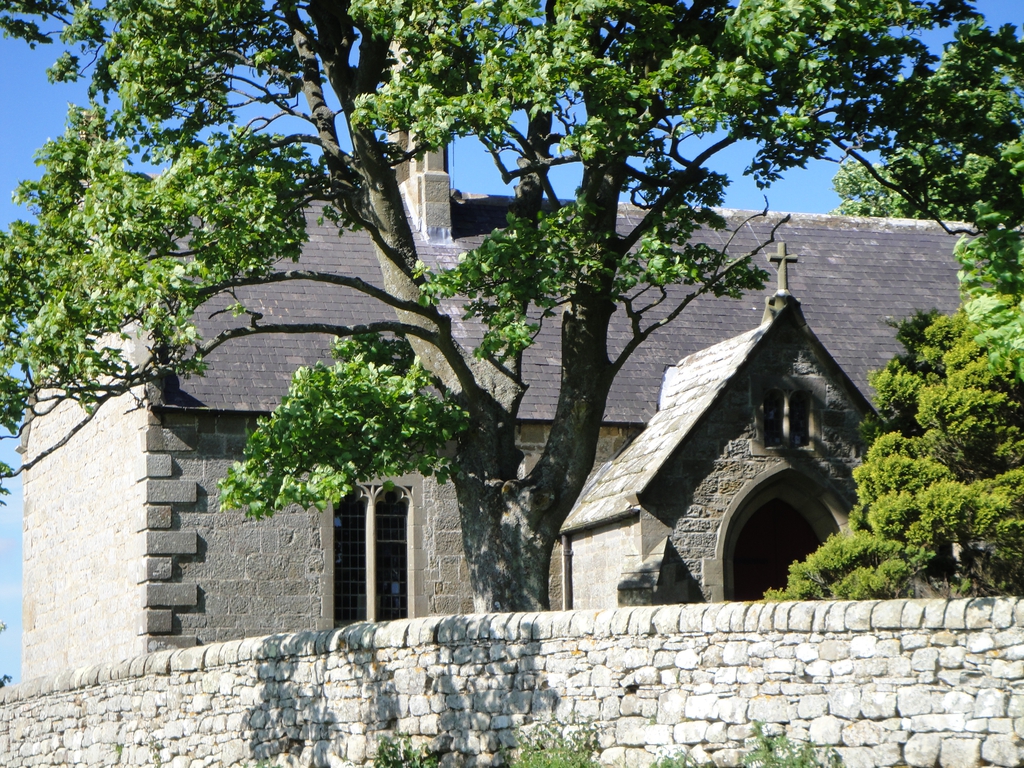 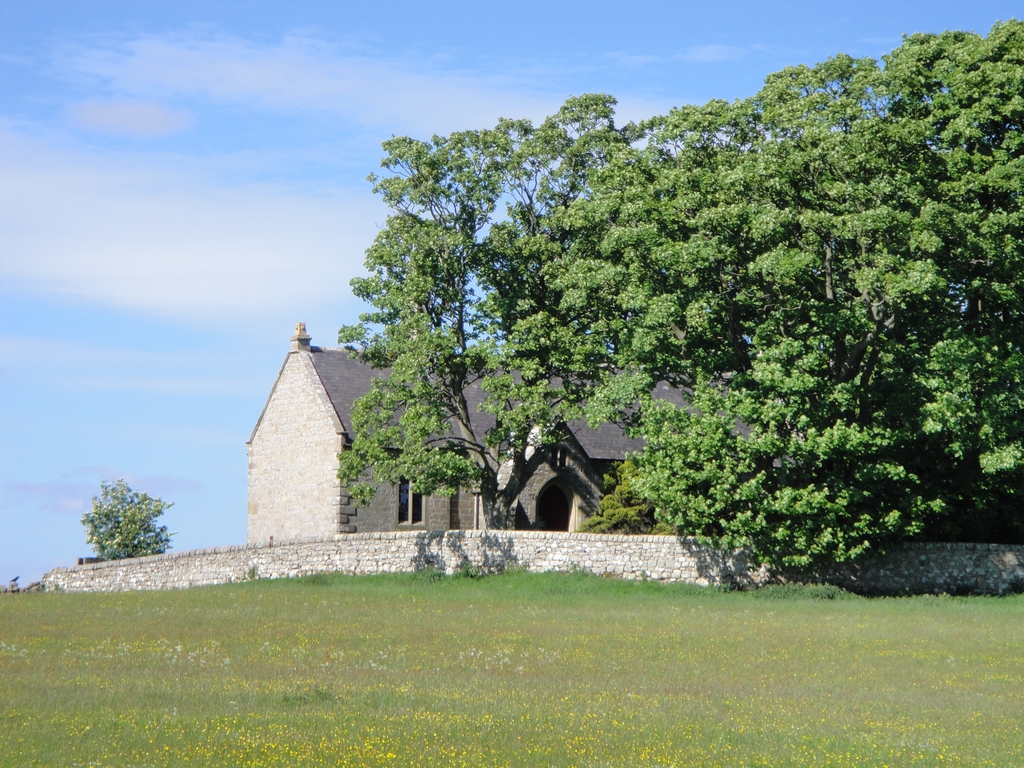 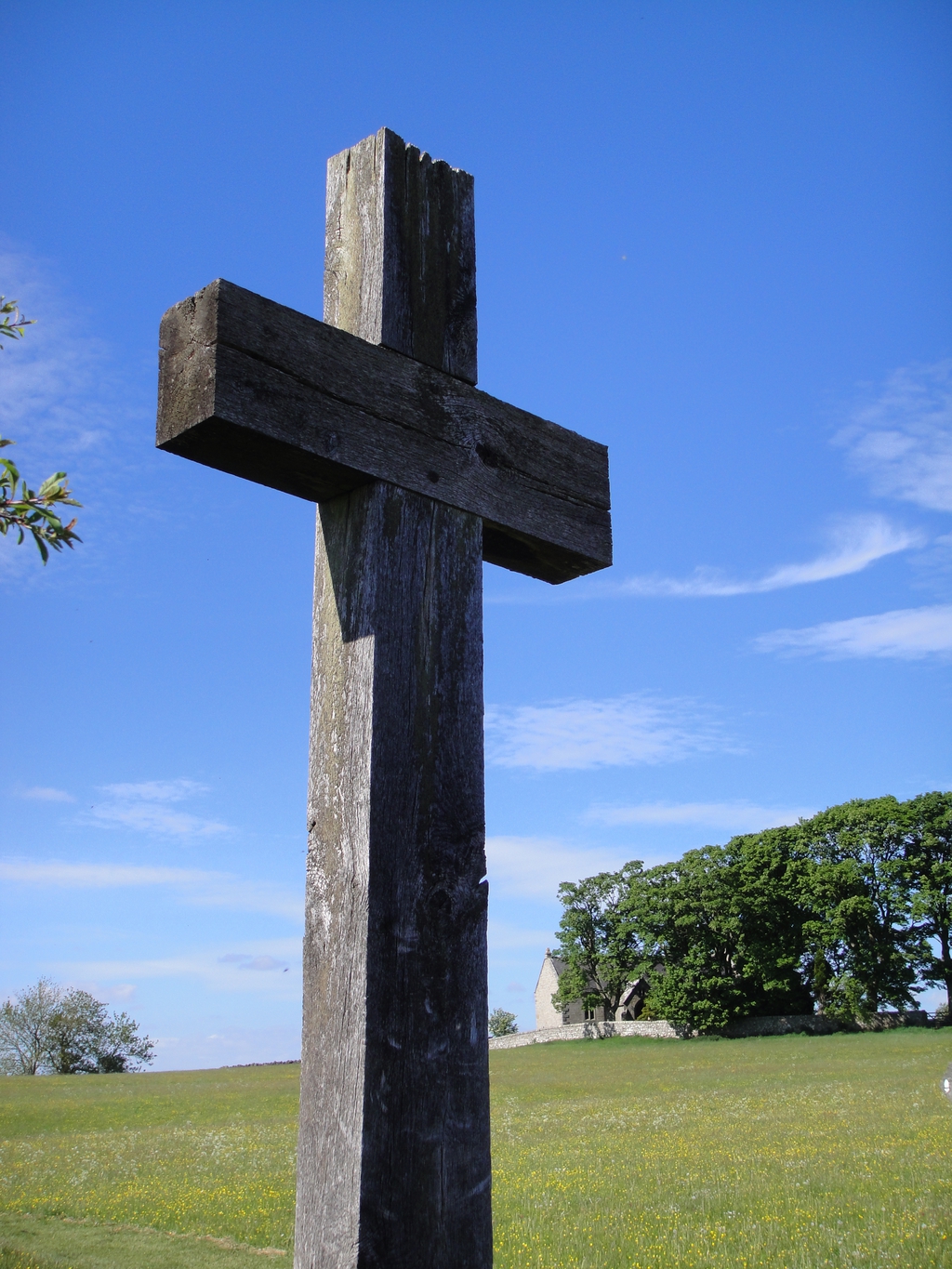 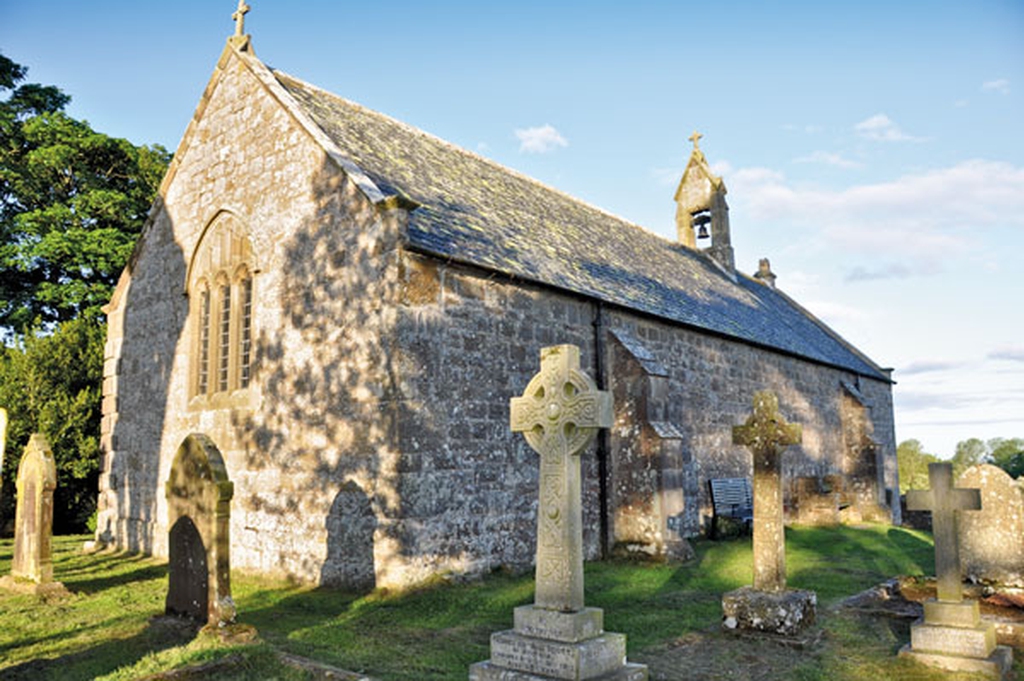 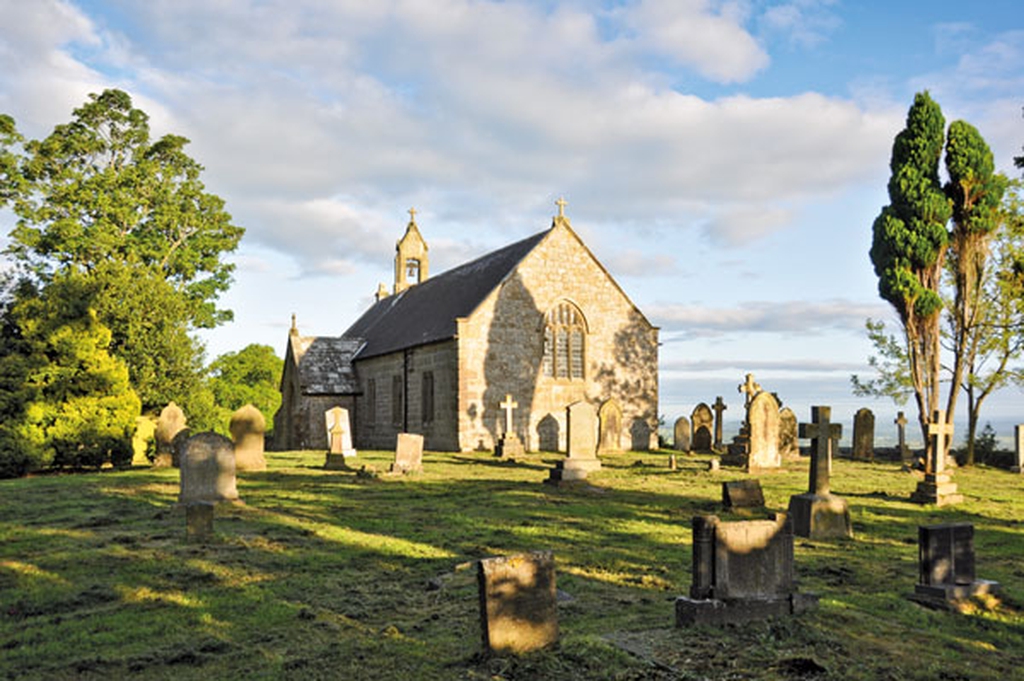 St Oswald
Services and events
News and notices
About us
Friends of St Oswald's
history
safeguarding
Find us
One mile east of Chollerford Heavenfield Hexham
Get in touch
(01434) 672303
Facilities
More information
Edit this Church
Church of England Diocese of Newcastle St. Oswald-in-Lee with St. Mary Bingfield

This church at Heavenfield is probably the third on the site of what is believed to be the location where King Oswald (604 -642) raised a large wooden cross before the Battle of Heavenfield (AD 635). Foundations of a Saxon church were discovered by dowsing in the 1950s, this being succeeded by a mediaeval church remodelled in 1887 by W.S Hicks who added the porch and the bellcote to the existing building.

The porch contains some relics of an earlier Elizabethan restoration .The original Celtic church is believed to be late 7th Century and consisted of two small cells. The north wall has no windows but contains at least two stones from an earlier church. Mounted on it is a hatchment with the coat of arms of the Andrews’ family.

There is a Roman altar which was found nearby, decorated with a sacrificial cleaver, wine ladle, vine branch and grapes. It has been made to serve as a socket for a cross. In the porch there are fragments of a medieval cross shaft.

An unusual feature is the gas-lighting, for safety reasons now disconnected. The two painted figures behind the altar are of St. Aidan and St. Oswald. On the south wall are some mason’s marks and outside the church on the south wall is a sundial dated 1737. St. Oswald's is not connected to mains supplies.

In the early 7th century the Kingdom of Northumbria, which spread from the River Humber to Edinburgh, was ruled by Edwin. He was an English King, a descendant from the Angles who had gained control of various areas of the country after the Romans departed. He was an enemy of the Celts and Britons who had been displaced by the Angles. Worried by the rapidly expanding kingdom, an alliance was formed between Cadwallon of Gwynedd (North Wales) and Penda of Mercia. This led to a major attack being launched against Edwin who was killed with his son in a battle near Doncaster in 633. There followed two years of slaughter and destruction by Cadwallon during which Northumbria was divided again into its two former kingdoms, Bernicia and Deira. During this period both of Edwin's heirs, his cousin Osric and his nephew Eanfrid were also killed. Now, the future of the kingdom became dependent upon the 29 year old Prince Oswald, Eanfrid's youngest brother.

Oswald was born around the year 605 AD. He was the son of King Aethelfrith of Bernicia, a kingdom that roughly covered the territory of modern day Northumberland and Durham. When his father was killed in battle and his uncle, Edwin, ascended the throne, Oswald and his brother, Oswiu, ended up on Iona after fleeing to Scotland.

Oswald in his teenage years was greatly influenced by the monastic life there, and before long he had been converted to Christianity and baptised.

When Edwin died at the battle of Hatfield Moor in 633, Oswald returned to Bamburgh, the seat of power of the Bernician royal family. Fired by faith, his wish was that each and every one of his subjects would be filled with God’s grace.

However, Cadwallon after defeating Edwin at the Battle of Doncaster, turned his attention to Oswald. Alerted to the fact that Cadwallon was marching north from York, along the old Roman road of Dere Street, Oswald rallied his troops and headed south from Bamburgh.

A few yards away from where this church now stands stood Hadrian's Wall [across the middle of the field between the church and the road]. The wall is likely to have been largely intact in those days and could have been as much as 20 feet high and 10 feet wide. King Oswald appears to have chosen the wall as the ideal southern defence for his battle position.

The night before the battle, while Cadwallon and his troops were in Hexham, Oswald erected a wooden cross on the high ground.

‘”Oswald set up the sign of the holy cross and, kneeling down, prayed God to send his heavenly aid to those who trusted in him in their dire need. This place is pointed out to this day and held in great veneration. It is said that, when the cross had been hurriedly made and the hole dug in which it was to stand, the devout king with ardent faith seized the cross and placed it in position himself, holding it upright with his own hands until the soldiers had heaped up sufficient earth so that it stood firm. This done he raised his voice, and calling out to his army, said 'Let us kneel together, and pray the true, the ever living and almighty God to protect us in his mercy from the arrogant savagery of our enemies, for he knows that we fight in a just cause for the preservation of our nation.’ The whole army did as he ordered and, advancing against the enemy as dawn was breaking, they won the victory that their faith deserved. At this spot where the king prayed, innumerable miracles of healing are known to have occurred which serve as a reminder and memorial of the king’s faith. This place is known as the ‘Heavenly field’,which name bestowed upon it a long time ago,was a sure omen of future events , indicating that there the heavenly sign would be set up, a heavenly victory won, and heavenly miracles take place. It lies on the northern side of the wall which the Romans built from sea to sea.

King Oswald had been instructed in the Christian faith by bishop Aidan, with the result that the king and the English people under his rule, not only learned to hope for the kingdom of heaven, which had been unknown to his ancestors, but were also granted by almighty God, creator of heaven and earth, an earthly kingdom greater than anything they had possessed. For Oswald gradually brought under his sceptre all the people and provinces of Britain speaking the four languages British, Pictish, Irish and English.

Although he wielded supreme power over the whole land, Oswald was always wonderfully humble, kind and generous to the poor and to strangers. Eventually he fell in a fierce battle at the place called Oswestry against the heathen Mercians and their king who had slain his predecessor Edwin. He died on the fifth day of August in the year 642 when he was thirty eight years of age.”

(The English Church and People by Bede)

Not much is known about the Battle of Heavenfield, but it is thought that Cadwallon was lulled into a sense of complacency by the fact he had far larger forces. Evidence suggests the battle spread over a number of sites as Cadwallon and his men fled in several different directions. It appears the Celts made their last, unsuccessful stand at the village of Hallington, five miles north of Heavenfield, but Cadwallon himself was killed on the banks of Rowley Burn, three miles south of Hexham.

King Oswald invited the monks of Iona to send someone to set up a monastery under his protection. After a false start with Corman, Aidan came to Lindisfarne. Oswald became his friend and interpreter and Christianity spread to be the principal religion of the whole nation.

Oswald was allowed no dignity in death, for Penda ordered his body be cut into pieces and his head mounted on a stake. Oswald’s head was eventually buried with St Cuthbert’s body in Durham Cathedral. Many stained glass windows contain an image of Cuthbert holding Oswald’s head in his hand.