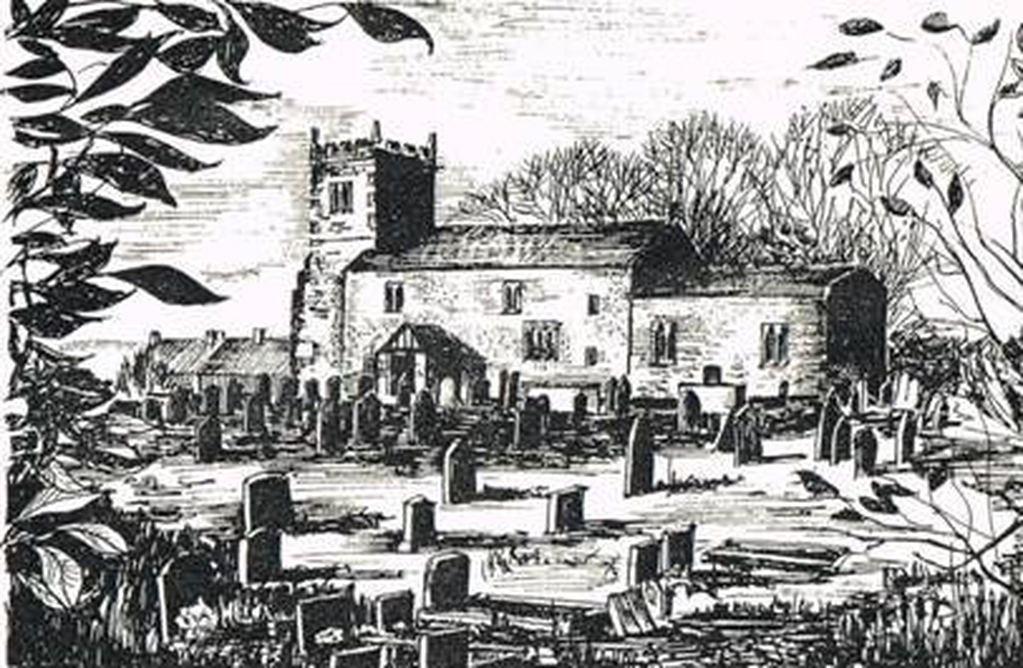 Introduction
For at least a thousand years the parishioners of Bulmer have worshipped on this site. The Domesday Book tells us that a church and a priest were at “Bolmere” in 1086. That church, however, probably was built much earlier, near the manor house, which is believed to have stood immediately to the West. Some of the surviving church masonry clearly pre-dates the Norman conquest of 1066. The lower outside walls of the nave, for example, contain patches of the herringbone pattern and roughly-cut wide-jointed work associated with earlier Saxon or Danish builders, and the blocked North doorway is framed in upright stones alternating with slabs laid flat in the long-and-short style typical of pre-Conquest construction in North Yorkshire.

The surviving head of an Anglo-Saxon wheel cross (hung now above the old North door) is further evidence of an ancient foundation and so is the dedication to St. Martin, the virtuous soldier and popular miracle worker who became Bishop of Tours. Martin died in 397 at least one English church had been built in his honour by the year 500. We do now know when the Bulmer church was consecrated but a dedication took place in 1287, probably following some alteration or act of desecration.

Even today, St Martin’s resembles a very early Christian church in its modest size, simple arrangements and lack of ornament. Visitors often remark on its peaceful and godly atmosphere.

The Normans did not change the local building style abruptly and this when the nave walls, as we see them today, are attributed chiefly to the 11th Century, we cannot say whether they were built before or after the Conquest. The surviving lower north wall of the chancel is dated to the 12th Century.
The first large-scale changes, needed to keep up with the growth of the village and current fashion, came in the late 14thor early 15th Century when the nave walls were heightened, clerestory windows inserted and the chancel altered, probably enlarged. In this period a chantry chapel was added to the North side, connected to the nave by two arches. It was subsequently removed in the 18th Century. The last substantial alteration was in 1898, when the chancel was reconstructed once more. The East and South walls were razed and completely and completely rebuilt with new windows and a priest’s door added.

Features inside the Church

On the North wall look for the 14th/15th Century clerestory window inserted when the roof was raised, the blocked doorway with Anglo-Saxon cross head above, the narrow deeply-splayed 11th Century light with a small bead around the head, and two early 18th Century windows introduced where arches formally led into the chapel. The stained glass window, designed by York artist J.W. Knowles, was a gift in 1895 of Elizabeth Saynor in memory of her mother Mary Bradley who died in 1829, and her father Simon Bradley, a Bulmer stonemason and bricklayer, who was buried here in 1841.

Below this window stretches the effigy of a praying knight in chain mail, one of the oldest surviving effigies in Yorkshire. It was carved of stone in the late 13th Century, and is believed to honour the third Sir John de Bulmer who died in 1268. Roger Dodsworth, the Yorkshire antiquarian who visited Bulmer in 1627, found the effigy on the North side of the chancel and reported that its legs were crossed. (He also saw a female effigy, since lost). The knight was removed by 17th or 18th Century “improvers” and crammed into the North nave wall with its legs broken off to make way for the pulpit. The shield bears traces of the Bulmer arms – (gules) billet and lion rampart (or). Dodsworth also found the Bulmer arms in the East window along with other heraldry which does not survive.

The Bulmer family, which appears to have acquired the manor at the start of the 12th Century, held it until 1537 when another Sir John de Bulmer was found guilty of treason and lost his estates to the Crown. He was hanged, drawn and quartered at Tyburn for his part in the Pilgrimage of Grace, a northern protest at Henry VIII’s seizure of the monasteries. Sir John’s wife, Lady Margaret, convicted with him, was burnt to death at Smithfield.

Beneath the Bulmer effigy is a foliated cross and sword incised on a stone slab, typical of 12th Century tombs.
On the south wall of the nave are deeply, splayed windows better studied from the outside.
A gallery was added in 1799 above the entrance to the vestry, probably for the choir, although it may have served a growing congregation. It had disappeared by 1900.

The CHANCEL is entered through a 15th Century arch and rood screen, of the same period which was restored in 1940 to a design of Leslie T Moore by C Longley of Hull, in pre-reformation style. Remnants of the original tracery are visible on the chancel side.
When the South and East walls were rebuilt in 1898, a priest’s door and two windows were inserted in the South wall, in the 15th Century Perpendicular style. The reconstructed East Window is filled with 19th Century stained glass commemoration William Preston, who had been rector for 61 years when he died in 1867. He succeeded his father, Charles Preston, who served the parish for 30 years (see the Preston memorials on either side of the altar and on the North wall).

A large slab on the sanctuary step records that Charles Howard, 3rd Earl of Carlisle, was buried here in his parish church in 1738, and removed to the Castle Howard mausoleum (completed in 1742) in 1745. This information is carved on a battered stone first used for the burial of Sir Ralph Bulmer in 1406. Most of the incised border is illegible, but the Bulmer arms are seen in the two right-hand corners and the name Radulphus Bulmer can be discerned.

In the North West corner of the chancel are remains of the diagonal opening, or squint, cut in the chancel arch pier to allow chapel priests to glimpse the high altar.

The font is a circular 13th Century bowl with octagonal stem and base.

The modern organ is by Forster and Andrews of Hull.

A list of the rectors from 13th Century hangs on the North wall. Early box pews were replaced by chairs in 1813, and the present pews date from around 1900. The oak altar and pulpit are also modern.

The parish registers, dating from 1571 but incomplete in the early years, may be seen in the Borthwick Institute of Historical Research at the University of York.

The church is entered by the South doorway of late 12th Century construction, with a round arch recessed in two orders. A porch was added in the 19th Century, and the door replaced in 1910, with the old ironwork put back on.
On the outside East wall of the porch is a slab with a fine Greek key border to Christopher Thompson, who died in 1748. He “wrought in iron and brass” for 45 years for the 3rd and 4th Earls of Carlisle, and died aged 78. The churchyard contains the graves of many other long-serving craftsmen and servants of Castle Howard.

The Tower was reconstructed in the late 14th or early 15th Century, with a 2-light window at the lower stage. The upper stage was rebuilt with an embattled parapet and angle pinnacles in 1637, and the buttresses and belfry may date from then. The tower houses a ring of three bells. The two trebles are thought to be the work of John Potter of York (active 1359-90) and the tenor was made by Sandal Smith 1, York in 1674.

The Nave South Wall – note the sun-dial high up, with its metal gnomon and the curious array of windows. On the upper level are two 2-light square headed clerestory windows from the 14th/15th Century, when the wall was raised. Slightly lower is a plain 18th Century window with small re-used medieval heads on either side. In the left jamb are the remains of a scratch dial. Plain 11th Century windows were inserted on either side of the doorway. On the lower level are a small square headed 2-light window. West of the door, a square-headed 3-light window of the 15th Century with another scratch dial (possibly once used as a mass clock) to the left and a plain 18th Century window.

The East end of the Chancel has worn medieval heads on either side of the 3-light window, a modern reconstruction.

The Nave North Wall – note the blocked doorway with round arch (the square lintel is a later insertion) and the small 11th Century window. Patchwork masonry here, as on the South side, includes the herringbone pattern and crude early work. Foundations of the early chapel are visible.

The parish (around 180 population) is joined in a Benefice with the parishes of Dalby, Huttons Ambo, Terrington and Welburn. Worship takes place on most Sundays within the benefice

With acknowledgement to Ellen Wilson and Ann Jones