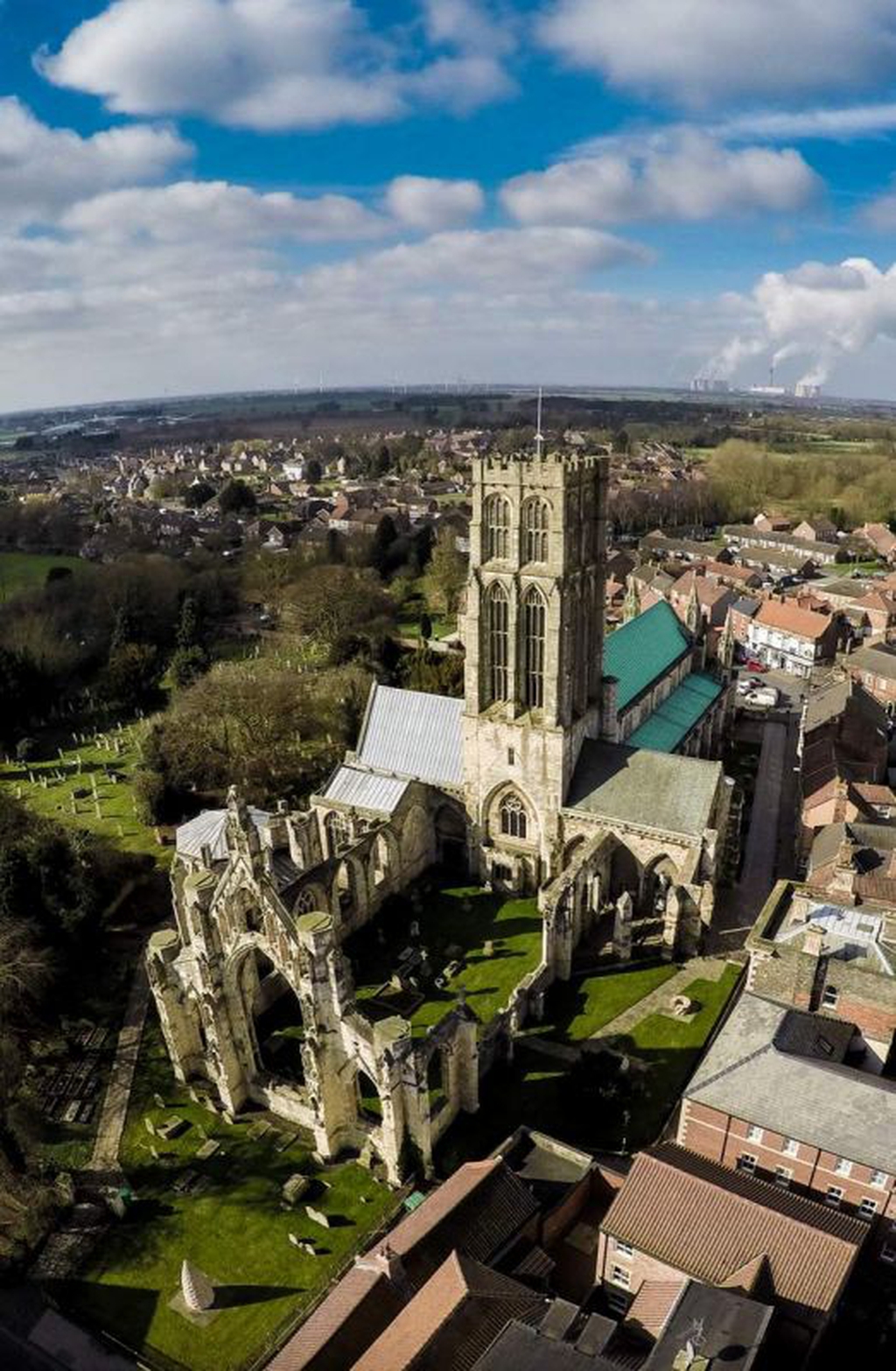 A Brief History of the Minster

An Introduction to Howden Minster:

The western end of Howden Minster serves as the parish church for the town of Howden and surrounding villages.

It continues in use for regular Christian worship and to support the community, education and the arts. The eastern end is ruinous, in the care of English Heritage, a government department. There is access to the outside of the ruins during daylight hours, but the inside of the ruins is closed to the public.

What is a minster?

The ancient minsters served a wider area than parish churches. In recent years, town or city centre churches such as at Hull and Doncaster have been made minsters to help with the church's wider mission and ministry, fulfilling a similar role today.

In the Middle Ages, a large part of the East Riding (then known as Howdenshire) belonged to the Prince Bishops of Durham. They had an important palace here. You can see the remains at the Bishops Manor, but the original palace was much larger. Together, the palace and the minster meant that it was not always necessary for the Prince Bishops to travel all the way north from London to Durham because they could do much of their work here in Howden. That was the reality here for the five-hundred years between the Norman Conquest and the Reformation. Medieval Howden was full of clergy: the senior canons based here, the vicars choral who sang the daily services, as well as great prelates coming down from Durham Cathedral or visiting the prince bishops from elsewhere.

There was an important church here at the time of the Norman Conquest. At that time, it belonged to Peterborough Abbey, now a cathedral. You can see a picture of King John visiting the town in our Coronation Window in the north transept. The chronicler, Roger of Howden (also depicted) served a secretary to John’s father, King Henry II. Part of the Romanesque central tower of church they knew is hidden in the present building. You can still see the steeper roofline.

The rest was almost entirely replaced by a new structure in the Geometric Gothic style between 1275 and 1320 under the leadership of St John of Howden after the church became collegiate in 1267. Our modern word, “college,” comes from the larger churches where the clergy worked with colleagues (not just a solitary vicar). Teaching was part of their role. Here at Howden, a Grammar School was built onto the south west side of the church in the early 1500s. The last pupils were still being taught here as late as the 1920s, when a more modern grammar school was built in nearby Goole.

Our Grammar School and the Chapter House in the ruins are signs that Howden was not an ordinary parish church.

The present church was rebuilt in the latest style in the 13th century. It was one of the first churches in the north in what is known as the decorated or geometric style (where all the abstract design has been drawn with a pair of compasses) and with the slim and elegant pillars seen here. The arrangement of the nave arcading here was bold and innovative, merging the traditional triforium and clerestory (upper windows) into one. Stylistic detail suggests that some of the masons (or their sons) from Notre Dame de Paris, who went on to work on the rebuilding of Westminster Abbey under King Henry III, then came north to build Howden Minster. The first senior canon at our new minster was John of Howden, who had been confessor to the Queen, and was a noted poet in Latin and Norman French. This John of Howden was locally regarded as a saint, and after his death in 1275 his tomb became an important place of pilgrimage. He is remembered here each year on 2 May.

In the early 15th century, Howden was a favourite residence of Bishop Walter Skirlaw, an East Riding man, who made the final additions to the medieval minster: the chapter house and the top stage of the tower. His successor as bishop was Thomas, Cardinal Langley. The cardinal was the most high-ranking person ever to reside at Howden. He was Lord Chancellor (chief minster) to three kings including Henry V (of Shakespeare and Agincourt fame). He added a fine new brick gatehouse to his Howden Palace, still standing in the minster rectory garden. The cardinal's time, perhaps, saw Howden's greatest splendours.

Howden's great days came to an end in the 16th century. In 1536, Howden Minster was at the heart of the Pilgrimage of Grace, the most serious of the Catholic rebellions against Henry VIII. The rebel leader was Robert Aske, a Howdenshire lawyer, who raised an army of over 30,000 men, but the rebellion failed due to treachery and betrayal. The Reformation removed the canons and most of the revenues from Howden. The shrine of St John of Howden was broken up and pilgrimage ceased. The Prince Bishops withdrew to Durham, abandoning their palace to decay and ruin. The townsfolk continued to use the nave of the minster as their parish church, as they still do today, but the glorious days of cardinals and kings in Howden were done.

In the 17th century came the Civil War; parliamentarian troops marching from Hull through Howden in 1644, on the way to attack Wressle Castle (four miles west, and now in private ownership), caused serious damage to the choir. They broke up the organ and used the pipes as whistles on the march. In 1696, the choir roof finally collapsed in a storm. The draining of the marshes, and the coming of the canals to Goole, (carrying produce from the industrial towns of the West Riding to deep water and the North Sea), changed the local landscape beyond all recognition. Howden went into eclipse.

Even so, Howden Minster continued to exercise a more than local influence; the iconic West Front was copied (at a smaller scale) at the RC Cathedral at Salford (1844-8).

Catastrophe struck Howden Minster in 1929, when arsonists forced their way into the tower and started a major fire that destroyed the woodwork in the tower, sanctuary and choir stalls. After the fire, the building was restored as if the building actually stopped under the tower. In the cardinal's day, the choir stalls would have been east of the screen, not coming back west into the nave and the floor would have been level rather than raised. There would have been a clear walkway from the north door to the south door under the lantern tower. The famous Yorkshire wood carver, Mousy Thompson of Kilburn, made the fine choir stalls and much of the other minster furnishings, as seen on Look North. Children love to hunt for the 30+ Thompson mice hidden around the Minster. Archbishop William Temple came to rededicate the restored minster in 1932.

The Great West Window contains some very fine 19th century glass by the Belgian glazier, J B Capronnier. The image of the Three Kings may have been inspired by the Three Kings windows in Cologne cathedral, finally completed around that time. Capronnier’s work can also be found in Philadelphia, where the American Declaration of Independence was signed in 1776. The two scenes on the Great West Window might be interpreted as the shepherds representing the Common Man of the American republic and the Wise Men, the European Monarchies. Two fine 20th century windows are at the end of each transept: the south window commemorates those who fell in the 1st World War; the north window commemorates the present Queen's coronation, depicting figures from the history of the town.

A modern flying cap, symbolising the flames of Pentecost, was added to the font in the 1960s. A new side chapel, dedicated to St William of York, was established in the north transept in 1979 using part of the stone high altar from the ruined east end of the medieval minster as its new free-standing altar. It is regularly used for weekday services. The upper Grammar School is used as the song school for the modern choir, echoing once more to children's voices.

Some very rare medieval statues survive to this day in Howden Minster. Most of them show signs of weathering. The statue now venerated as representing Mary, the Mother of the Lord has been carefully protected from wind, rain, snow, war and vandalism across the centuries. Some art historians hold the opinion that this was originally carved to represent a different saint. A modern series of abstract sculpture by John Maine R.A. was installed outside the minster 2002 -2008. Funded by various civic amenity bodies, they run from the West Front, and down the north side along Churchside, their drum shape and patterning echo our ancient link to Durham Cathedral.

Major restoration of the exterior took place between 2006 and 2011 costing £1.2 million. At the time, Howden received English Heritage's largest grant in the North.

Like most historic churches in England, Howden Minster is part of the Church of England within the world-wide Anglican Communion. The Church of England is one of the churches that broke away from Rome in the 16th century, yet still stresses continuity with the church of the Middle Ages. The Anglican Communion today is usually strongest in those countries where English is the main language. The member churches usually refer to themselves as Anglican, but in Scotland and the USA the term Episcopalian is preferred. The Porvoo Agreement was signed with the Baltic Lutheran Churches in 1995, leading to full sacramental hospitality. We are in a covenanted relationship with the Methodist and United Reformed Churches.