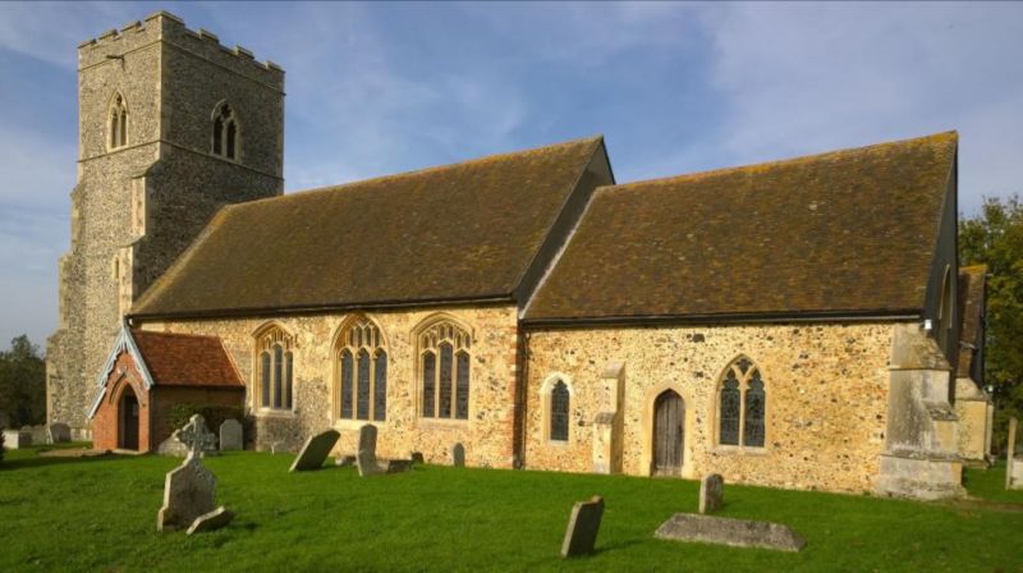 St Mary the Virgin, Edwardstone
Services and events
News and notices
About us
Brief historical notes of the church of St Mary the Virgin at Edwardstone
Morden College and the connection to Edwardstone
Regular Service Pattern
The Churchyard: A Brief Account
Find us
Temple Bar Edwardstone, Sudbury Sudbury
Get in touch
01787 210434
Facilities
More information
Edit this Church

This note can be no substitute for the detailed and well written guide book which is on sale in the church. If you visit the church and wish to know more, do please purchase a copy.

The church of St Mary the Virgin stands almost on its own on relatively high ground in a substantial churchyard some way along a roughly surfaced track leading only to farms and fields. There are fine views from the churchyard, particularly so to the west out across the valley of the River Box which rises a few miles away to the north. This attractive rural location makes the church a favourite venue for weddings.

The building as we see it now shows no trace of the earliest of churches which stood on this site. The Little, or Lesser Domesday Book, which referred to Essex, Suffolk and Norfolk only, written in 1086 records that there was a church with 30 acres of land in Edwardstone in the time of Edward the Confessor. Edward reigned between 1042 and 1066. Beyond that nothing is known. But much of this part of East Anglia is known as ancient countryside, and its field patterns, lanes and woods are likely to predate the Roman occupation a full thousand years before Edward. As such there were almost certainly settled and established communities which continued to exist after the passing of the Romans. As Christianity spread through East Anglia in the seventh century, many churches were founded and the familiar parish system gradually came into being. Such churches may have been no more than simple wooden structures, but once a church was established, no matter what became of the buildings, the sites were seldom abandoned. So it is, that St Mary the Virgin probably occupies a position that has been sacred ground from well before Edward’s reign.

The Church as it is now

Most accounts of the church identify the chancel and the vestry as the earliest parts of the building dating to the early fourteenth century, however, Peter Welstand, the author of the guide, gives a closely argued case for the south wall of the nave, and, possibly, the western part of the south chancel wall as belonging to the late twelfth century or early thirteenth century. In addition, he has identified a will which dates the vestry to the sixteenth century. To the early fourteenth century belong the eastern end of the chancel, the sanctuary and the western most window in the south wall of the nave, the only one remaining of several that would have been placed along its length. The north aisle was added around 1460 along with the west tower. To this period of church building belong also the three large windows in the south nave wall; the central one being earlier than the other two either side. The brick south porch belongs mostly to the nineteenth century, though there is a much older tie beam in its roof structure. As is typical of East Anglian churches the principal building material is flint with stone dressings at the corners, though there is a notable amount of Roman brick in the nave south wall and the south east corner of the nave is entirely fashioned from this material.

The church was extensively and sensitively restored in the later nineteenth century to the designs of G.F. Bodley. In fact, standing in the church the only furnishings and fittings which do not belong to this restoration are the font bowl and cover, the pulpit and the two ancient benches at the west end of the nave. So all the other benches, the wood wall panelling, the organ case, the elegant set of eight wrought iron candelabra (96 candles originally!) belong to a single design scheme. Bodley also provided most attractive painted decoration for the walls of the chancel and the three main roofs. Some of this survives, particularly on the chancel and north aisle roofs, and the organ case, though the extensive work in the chancel was lost to further redecoration in the first half of the twentieth century.

There is a plain fourteenth century font bowl (the columns and base are nineteenth century), with a neat and well-formed seventeenth century wooden font cover. The pulpit, too, is of the age of the Stuarts and is complete with steps, back panel and tester, the canopy overhead which acts as a sounding board. All of this is decorated in the familiar geometrically patterned carving.

In the early twentieth century the elaborate and beautifully designed and executed reredos was installed to designs by C.G. Hare, Bodley’s successor.

There are several interesting wall monuments ranging from the seventeenth century through to the nineteenth century. Apart from two fragments of medieval glass in the west windows, all the stained glass was installed between 1877, the window by the pulpit, and 1921, the central window on the south wall of the nave. In the east window is a well drawn design depicting the Crucifixion with figures of the Virgin and Child, St Edmund and two bishops and saints. This is by the London firm of Burlison and Grylls and was installed in 1898, as is the glass in several of the other windows.

The organ was put in place in 1879 at which time it had been rebuilt. However, the original instrument, of which much is still in situ, was built by ‘Father Smith’, (Bernhardt Schmidt, a German craftsman who emigrated to England in 1667 and took the name Bernard Smith, one of the two greatest organ builders of the seventeenth century) and dates to 1670. It was originally constructed for the Sheldonian Theatre in Oxford.

The twenty-first century has provided the attractive new lectern made by Andrew Beckwith who also made the Bishop’s Chair in the sanctuary.

Much more could be said, but if you visit take your time to explore this church more fully with the aid of the guidebook, and let the presence of the faith of many generations of Christian worshippers speak for itself.