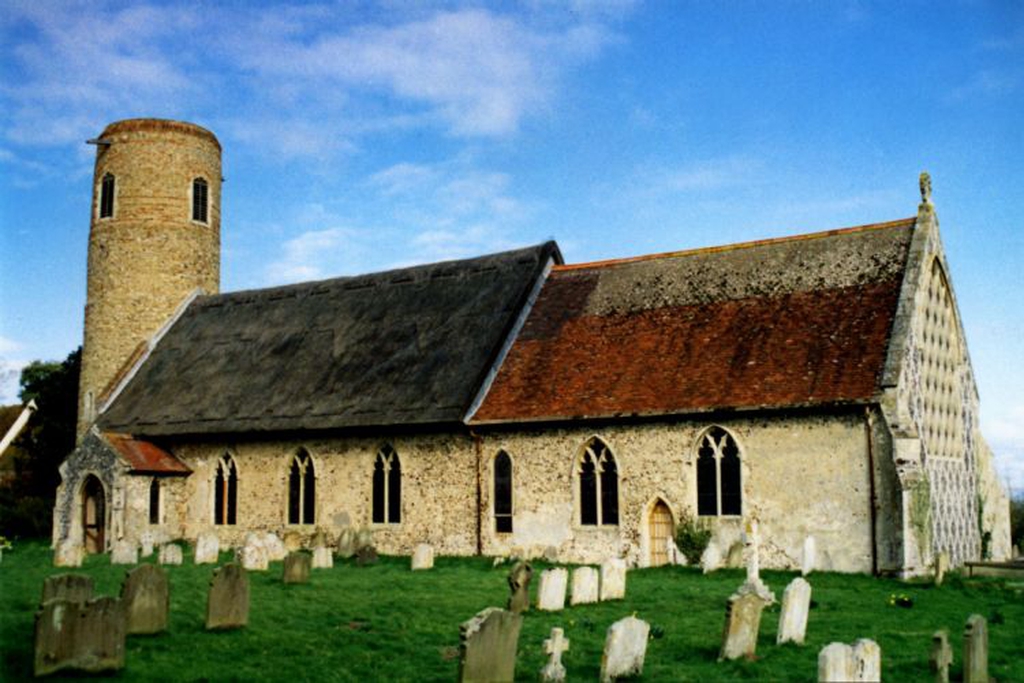 We have a ring of 5 bells : the oldest dates from 1514 to 1523. It is not possible to be more accurate than that as it is an 'Alphabet' bell ! It gets its name because it bears the sprigged shield of Rich'd Brasyer II and uses some four or five of his wire lettering purely as decoration. Now Rich'd Brasyer died in 1513 and in his will he directs that a cunning artisan should finish off his contracts before his foundry in Bell Lane, Norwich was sold.

Clearly the artisan was illiterate so could not mould an appropriate sentence, hence their use as decoration. Clearly by 1523 he had finished the contracts and the foundry was sold - hence our dating. Even if he was illiterate, his foundry skills must have been good as proved by our bell !

The other four bells were cast by Mears & Stainbank, Whitechapel Foundry 1893 and installed in 1894 they are dedicated to

Capt Maurice Suckling, RN - a fine sailor, brother of Catherine mother of Admiral Lord Nelson. He was in the West Indies in the year 1757 under the general command of Rear Admiral Coles three ships were detached from his force : the Augusta - 80 guns (Capt. Forrest), the Dreadnought - 60 guns (Capt. Suckling) and the Edinburgh (Capt. Langdon) and ordered to cruise off Cape Francois, Martinique to intercept a French convoy expected to sail to Europe from that port. On 21st October the French commodore put to sea with a squadron of seven ships (total 370 guns). This superiority was far from intimidating the English commanders. A council of war was held, "in which the question was not," says the official account, "how much is the enemy's force superior, or how unequal the combat." "Gentlemen," said Captain Forrest, "you see the force of the enemy : is it your resolution to fight them or not?"

To which Suckling & Langdon replied, "It is," and the council broke up having lasted half-a-minute. A two to three hour battle then ensued with unremitting fury until eventually the French were defeated. French losses were some 600 killed and wounded and of the English 23 killed 79 wounded. However, the English ships were very heavily damaged but managed to return to Jamaica for repairs." I suspect the result was due to our far superior gunnery !

Note the date : the same as Trafalgar some 48 years later.
Pure chance, or by some conjuring on Nelson's part ?

Fr Charles Fluge Lowder : Vicar of St Peter's, London Docks until his death when our Fr Robert Alfred John Suckling was appointed in his place. Hence the dedication on one of our bells. Fr Lowder founded the Society of the Sacred Cross for high Anglican clergy. He was also the very first Anglican priest to be called 'Father'. The parish was incredibly poor, dock work, harlotry and petty crime being the usual pursuits. During Lowder's incumbency there was a severe outbreak of cholera in the parish, Fr Lowder and his curates rushed around visiting the worst hit and providing whatever comforts were needed. Hence the parish started calling them Fathers of the church - soon shortened to Father Lowder, etc.. Nothing official about it !

Fr Alexander Heriot Mackonochie : Sometime curate of Fr Lowder's at St Peter's, London Dock. From there he was appointed to St Alban's Holborn : a successful priest but being of very high Anglican persuasion was soon in violent rows with the churchmen of a more Protestant line. He was about to be arraigned before the courts : which was not welcome by higher authority so A/bp Tait persuaded him to retire and appointed Rev'd Robert Alfred John Suckling, then vicar of St Peter's London Docks as vicar of St Alban's, Holborn another very poor parish, well illustrated by RAJS's comments on visiting, "Quite often 6 - 8 people living in a single room along with 2 dead bodies, waiting for the dustcart as city churchyards were now full and they had insufficient money to have them taken to the large new cemetery at Brookwood nr Woking" Hence RAJS instigated a burial guild at St Alban's and another at Barsham as he was still our Patron and did a lot of work on the church during his holidays.

Rev'd John Yelloly : An uncle who held Barsham during RAJS minority. On reaching sufficient age, RAJS gave the word and Yelloly resigned from Barsham, taking up another post : and in 1868 RAJS appointed himself to Barsham at the tender age of 26 yrs, the youngest possible.

The organ was made in 1877 by William Hill of London. It was designed as a two manual unit although only one was fitted at the time due to the enormous cost. The Commemorative plaque records a complete overhaul of the organ plus the addition of genuine Wm Hill pre used parts making up the 'swell organ' or second manual, it's windchest came from south Suffolk, while the pipes came from Bath.
The organ is in use every week

1st,2nd and 4th Sunday Eucharist services are BCP based.
Trinity and Harvest Evensong are BCP

The church is open from (approx.) 9am until 5pm (or dusk)

Donations go to the local Foodbank in Beccles