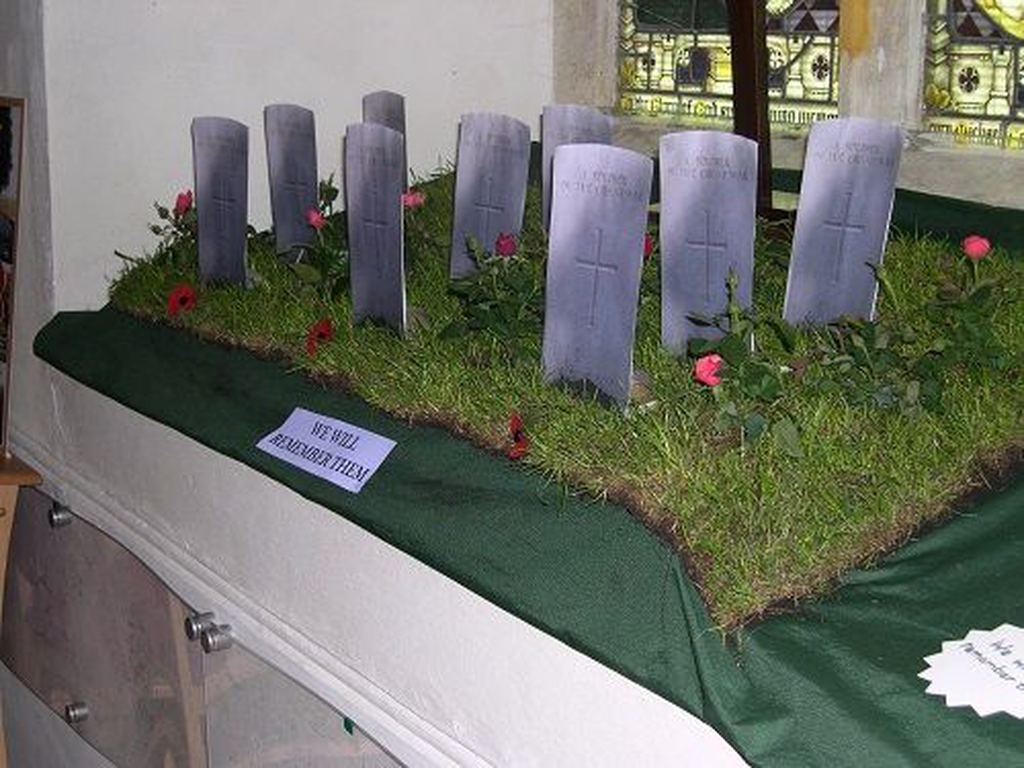 including my monthly letter published in our Parish Magazine.

These notes were taken at the time in various books and I have now drawn them all together as I think they may be of interest in years to come. They are just a brief record of daily, weekly, or monthly events as I jotted them down.

1914 Tuesday August 4. I am in London, staying at the Constitutional Club, Northumberland Avenue on my way home after my summer holiday. There is a wondering, supressed excitement everywhere - I have just come up from Falmouth*, staying for a couple of nights in Exeter - everywhere the same - the streets of the latter city crowded with people - everywhere the same look in people's faces, the same question on their lips: Does it mean War, do you think? strangers ask one another as they stand about in the streets. The Strand, Trafalgar Square, Pall Mall, Piccadilly etc crammed with people. About 10.00 pm everybody by an uncontrollable impulse suddenly turned and made their way up the Mall to Buckingham Palace. [note in margin: as we were going up the Mall to Buckingham Palace a large number of artillery with their guns passed us. We, the crowd, did not know at the time, but they were then off to France with the Expeditionary Force] I never could have conceived anything like it - there must have been hundreds of thousands of people, all patiently waiting, for what we hardly knew. Occasionally there were cheers or somebody started a patriotic song, but the prevailing note was great quietness - very impressive coupled with the strange look - I hardly know how to describe the look - on people's faces..
11.40 p.m. The King has just come out on the balcony - and has announced, though I could not hear myself what he said, that War has been declared on Germany.
And so what I have so often spoken about has come at last - it is impossible on a day like this to grasp what it means but something I greatly fear too horrible for words.

5th. The Streets remained crowded all night - at least when I went to bed about 1 A M they were in that condition and when I woke today they were the same. I have been standing in Parliament Street and its' neighbourhood - all day, watching members of Parliament**, [note in margin: one young man standing near me told me that he was just back from Ceylon. I have no doubt that he joined up - he had not been home, he said, for several years] Generals etc come and go - crowds of people everybody seemed to talk to the man standing with him. All social distinctions seem to have been wiped out - face to face with this terrible thing. Hundreds of men are trying to enlist (my young nephew who met me in London amongst them). Crowds of Americans in the streets - especially before the offices of the American Liners trying to book passage to get home. Many of them look very worried.

6th. Returned home. [note in margin: on every country station I saw, as the train whizzed by, a policeman and a little crowd of village people gathered - waiting and wondering. The Reservists have been called up and so the news has reached the remotist village] Everywhere the same look of subdued excitement and expectancy on people's faces which I had observed in London and the West. Indeed it is a most awful calamity which has come upon the human race - none can tell how far it will spread and how it will end - but I wish to place on record that I, for one, have no fears as to the eventual result. Bertie Laws, Reggie Hawes, Bill Harper and all our other Reservists and Territorials joined the Colours yesterday I am told.