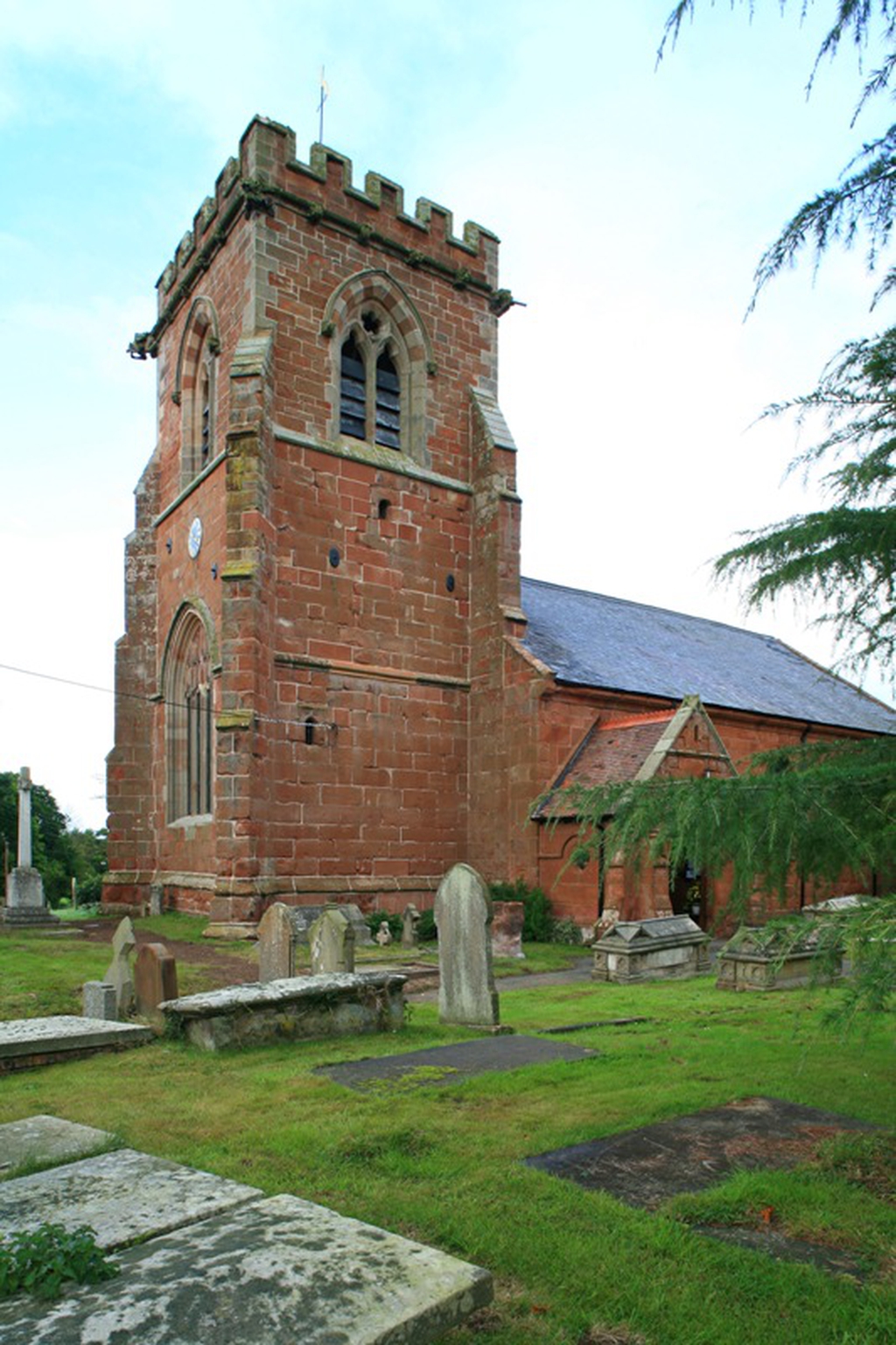 The Parish Church of St. Mary dominates the village of Kinnerley and from it roads radiate to its satellites of Pentre, Edgerley, Knockin Heath, Kynaston and Dovaston, all within the Parish bounds.  Prominent on its circular mound, looked at from all angles, our minds go back two thousand years.  Was this a possible, if not probable, site of early worship and celebration like so many similar sites over our land?  The Saxons, who have left us the field patterns around the glebe land, probably built a simple wooden church here in early Christian days, to be succeeded by a stone church, changing over the centuries to meet current needs.  Our folk were baptised here, married here, buried here and here they organised their lives around the seasons and the festivals.

As long ago as 1291 we find that the church was in the deanery of Marchia and in the Diocese of St. Asaph.  It only came into the Diocese of Lichfield on the occasion of the Disestablishment of the Welsh Church.

In the "Valor" of 1534/35 the Vicarage, that is the living, was worth £7 2s. 6d., and the Rectory, the tithes of corn and hay, was worth £20, but alas the latter went to the Rector of Halston.  The Priory of the Order of the Knights of the Hospitallers was at Halston.  The Hospitallers of St. John of Jerusalem had taken over both the Church and the Manor, and held them until the Dissolution of the Monasteries.  Obviously parts of the lands owned by the Priory were given to the local Rector of Halston after the Dissolution.

Of the present church only the lower two thirds of the tower remain of the original church.  It is typical of mediaeval perpendicular architecture and may safely be dated to the late fourteenth/early fifteenth century.  The tower arch has moulded capitals and broad ogee mouldings, usual perpendicular features of this period.  An interesting feature of the original structure is a profusion of 'mason marks' made by the monumental masons who built the church.  They are to be seen in what is now the vestry.  Initials dating back to the seventeenth century badly disfigure the walls in the lower part of the tower.  Also to be seen on the lower part of the tower, near the south door, are grooves made by mediaeval archers sharpening their arrows.

In 1768 the condition of the old church was giving much cause for concern.  We are told that "a frame of timber was made to support ye arch of ye church."  In January 1773, we read that "an article has been entered to rebuild the church for the sum of £639".  In the same month we read in the parish register, "The taking down of the old church was begun on the first day of the month.  During the intermediate time from the taking down of the old church to the opening of the new one several children of this parish were baptised in the adjoining churches, and consequently these Baptisms are entered in the several registers there-unto respectively belonging."  Fortunately a brief to pull down and erect a new tower was not complied with.  Services were resumed in the church on 17th July, 1774.  The architect for the 'new' church was Thomas Farnolls Pritchard who is better known as being the architect of the world-famous iron bridge in the Severn gorge.

The Georgian Church consists of a broad nave and an apsidal chancel.  The wall of the Sanctuary is rounded; this is interesting insofar as it conforms to the architecture of the earliest Christian Churches.  A pedimented doorway in the north-west corner of the nave, blocked up for many years, has recently been reopened.  Like the tower, the 'new' church is built of large red sandstone blocks.

The apse has a magnificent painted reredos, which includes the Lord's Prayer, the Creed and the Ten Commandments, flanked by two fine stained glass windows depicting the Annunciation and the Nativity, the figures portrayed under classical canopies, in keeping with the style and architecture of the Church.

During 2007, major restoration work was carried out on the tower involving dismantling and rebuilding of the north-west corner, replacement and repair of defective stonework and pointing, and repair and sealing of both ends of the nave roof.

The church possesses three bells, the first and second of which are considered much superior in tone to the third.  The story runs that these two bells were being re-cast at Kinnerley at the expense of the parish.  While they were casting a certain farmer of the place stopped to watch the work on his way home from Shrewsbury "beas far" or cattle fair where he had sold two cows named Dobbin and Golden.  He was asked what he would give towards the cost of re-casting the bells and replied that he would give Dobbin and Golden.  He thereupon put the silver coins he had received for his cattle into the furnace.  So the two bells were thereafter called Dobbin and Golden, and the silver alloy in the bell metal produced the sweetness of the tone.  The first bell has no date inscribed on it, merely the alphabet twice repeated in antique characters, but the second bears the date 1685 with the churchwardens' names.  The third bell was not cast until 1732, by Rudhall of Gloucester.

The tower was restored in 1862 by the Reverend E. W. O. Bridgeman who also gave the octagonal font now in the church.  He got rid of the original font to make room for his new one.  Just when the old font was on the point of being broken up it was rescued by a member of the Dovaston family living in West Felton.  By a good stroke of fortune we recovered the font in 1966 and it can now be seen in the churchyard beyond the west wall of the porch.  The old font is also octagonal and has cut, round the outside, in bold Greek letters the palindrome which translated reads, "Wash not only my face, but my transgressions also."  It is doubtless mediaeval, and rests on an older round base, carved with linear patterns.  Dr. Crannage says that the base is twelfth century, or even earlier.

In the churchyard south of the church stands the remains of the Churchyard Cross, consisting of about 2ft. 6in. of an octagonal stem resting on a square chamfered block on three octagonal steps.  The date is most probably fifteenth century and coeval with the church.  There is a late sundial on top of the stem dated 1828 and the names of the churchwardens, R. Bottrell and E. Downes.

There are two lovely Chalices dated 1575 and 1607 respectively.  The Paten is dated 1807.  We still use the earlier Chalice at every celebration of Holy Communion.

At the back of the church there is a good plain chest dated 1681.  It is divided into two sections, the larger having three locks.  It would appear that there was little trust between the Vicar and Churchwardens in those days.  As the church treasures were kept in the larger division, each person held one key, therefore the chest could not be opened unless the three gentlemen were present together.  The initials on the chest are those of the churchwardens, John Flledge and Edward Davids.  We find that in 1680 the sum of £2 was paid "ffor anew cheft for the ufe of the Church."

The list of Vicars goes back to 1280 and can be seen on the west wall of the nave.

There is an interesting monument on the north wall of the chancel.  It commemorates John Bridgeman the well known Bishop of Chester in the reigns of James I and Charles 1.  He became a bishop in the days when it was a bishop's duty to repress the Nonconformists whose chapels were springing up everywhere.  It is to Bishop Bridgeman's credit that he disliked this part of his duties, and it has been recorded of him that "he loved neither to threaten nor to strike, but when he did strike he did it as effectually as if he loved it."

The Church of St. Mary, Kinnerley was included in the list of Buildings of Special Architectural or Historic Interest by the Minister of Housing and Local Government on 8th October, 1959.

Our heritage as a village and the continuous worship within the parish church goes to the very root of English life, a way of life that has grown slowly throughout the centuries.  Both before and after the Reformation, life was predominantly country life, and the vast majority of people lived round the parish church in country towns and villages.

One thing is clear as we delve into the history of Kinnerley.  Both the village and the church have undergone many hardships and weathered many storms, but this merely serves to highlight the fact that the circumstances under which our parish came into being, and endowed, resulted in a great measure of love and respect between the church and people of Kinnerley, culminating as it did in the intimate connection of parochial organisation with the whole life of the village.  This is the heritage and trust that has come down to us from the past; equally this is the heritage that we in our generation must pass on to future generations as yet unborn.

Kinnerley Church must not be regarded as an interesting relic of the past, it is a living institution with real meaning for life today.  More than that, it speaks eloquently today of things eternal, for it is the Body of Christ and the House of God.