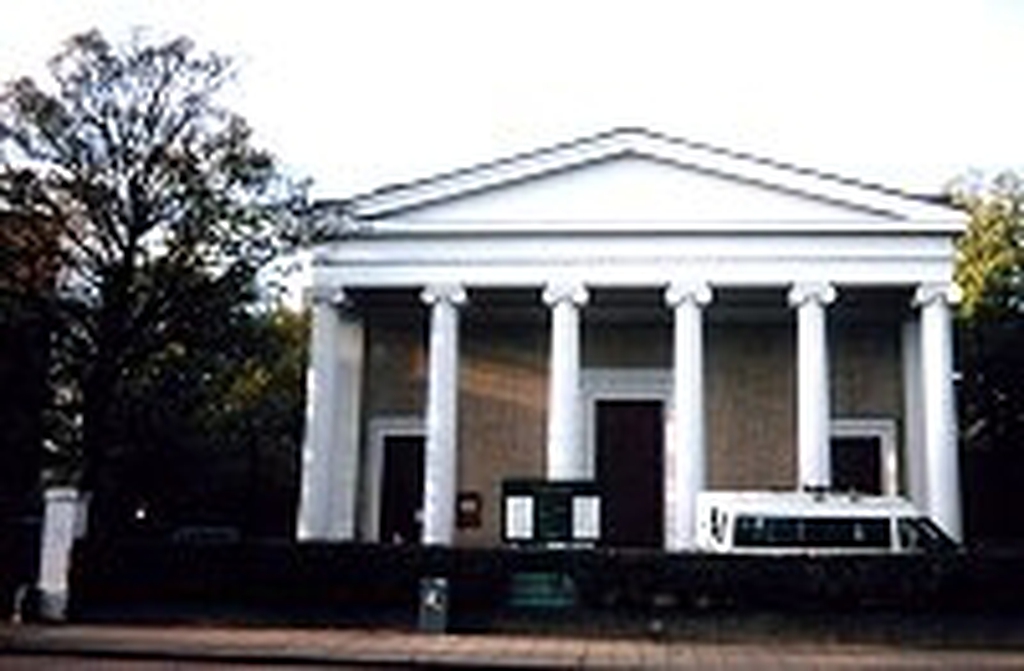 Clapham, St John the Evangelist
Services and events
News and notices
About us
About the church
Find us
Clapham Road Clapham London
Get in touch
(020) 7622 3552
Facilities
More information
Edit this Church
Church of England Diocese of Southwark Clapham, Christ Church and St. John

St John's Church occupies a confined site on the West side of Clapham Road, A23, one of the principal arterial roads leading to London. Surrounding land uses are residential.

It was designed by T Marsh Nelson and built as a chapel-of-case for Holy Trinity, Church in 1842 in a Classical style, which is surprising for its date. It comprises a plain brick box with a five bay portico of Ionic fluted columns supporting a pediment, all in painted stucco. The exterior is unaltered except for the addition of a single storey extension at the west end which accommodates a large vestry and store, and the blocking of the eastmost window in the south wall of the nave.

The interior as originally composed is not known but until recently consisted of a sanctuary sited against the east wall, that is, directly behind the principal doorway distinguished from the remainder by substantial change of level. The sanctuary is flanked by the principal entrance on the south side and on the north side a sacristy, and mezzanine above it; adjacent to this is a small Lady Chapel. The remainder was given over to seating, provided by benches, with galleries on three sides. The effect of this was to reverse the usual west to east orientation, although the font was sited at the liturgical west end.

In 1986 the building was truncated by the erection of a solid panelled timber screen erected north-south immediately west of the Sanctuary steps. In addition, the areas below the galleries were partitioned off to provide a variety of ancillary spaces including stores, offices, kitchen and lavatories. At the same time the bench seating was replaced with chairs. All the above was carried out with no real conviction and the net result is an unhappy one. During more recent times, the pipe organ which was sited at high level in the south west corner, that is, above the main entrance, has been restored.

In short, this building has suffered due to a lack of clarity from its earliest day. First of all when the east-west axis was reversed and latterly the internal alterations described above. These changes plus the ravages of dry rot have left the interior merely as a jumble of ill-defined spaces without any overall cohesion.

There is an extensive crypt which extends to the whole of the building. Access to this and the galleries is via two staircases, at the north west and south west corners.
×