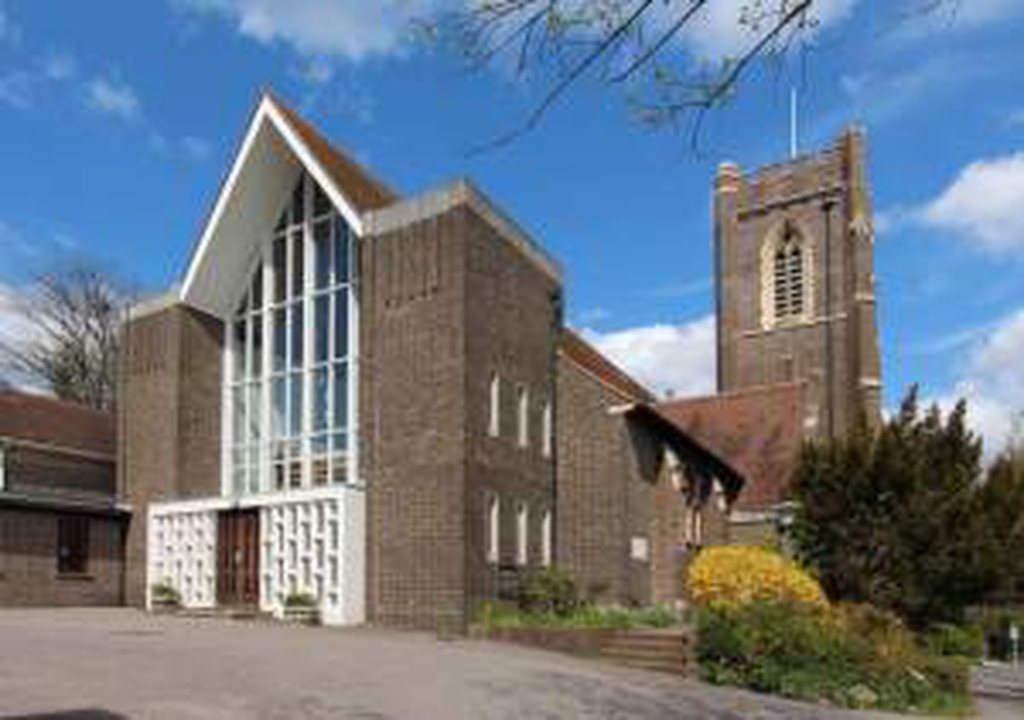 St Andrew's Church, Coulsdon
Services and events
News and notices
About us
About the church
Find us
Woodmansterne Road Coulsdon
Get in touch
020 8676 2966
Facilities
More information
Edit this Church

The Church is built on a site that slopes steeply to the south east, which allows an undercroft at the east end entered from ground level; the main, west door is at the higher ground level. The main body of the church remains much as built although it was extended at the west end in 1962 by John Stammers, forming a narthex with balcony seats above. The narthex in divided from the nave by a sliding-folding fully-glazed screen. Also leading from the narthex are an office and a stairway leading to the balcony above, and the sacristan's store. Above the balcony there is a large timber-framed west window, double-glazed with clear glass units. The structure is of load-bearing brick construction with stone decorations and dressings externally. The roof is covered with plain clay tiles in a continuous, but double-pitched slope each side. The roofs of the tower, and the two 1963 western turrets are asphalted.

The nave is separated by columns from aisles on both sides. The aisles are lit by tripartite windows with pointed heads and faintly tinted hand-made glass, in each bay. There is no clerestorey. There are two short transepts, less lofty than the nave. Both transepts have large "Gothick" traceried windows with three stone mullions and faintly tinted handmade glass. There are north and south doors. The south transept houses the baptistry, with stone font with timber cover. The chancel and sanctuary are conventional. The chancel is raised two steps above, and divided from, the nave by a low metal gated railing; it has tiered, raised choir stalls of timber. The sanctuary is raised one further step at the rail. The altar is raised upon three steps; it is of carved timber, and set against the draped reredos, which in surmounted by a full width painted panel showing 11 saints on a black background with gilt surround, the work of Sebastian Cooper, W Butchard and Isolde Wigram in 1959-60. The east window above (and that of the Lady Chapel) are of decorated coloured glass, believed to have been designed by Arthur Bucknall, Sir J N Comper's nephew and assistant, who also designed the pendant light fittings at the east end, all in the mid-1920's. The Lady Chapel is on the north side of, and level with, the chancel and is approached from the north transept and the sanctuary. There is a similar metal railing to separate it from the north transept.

The south-east corner of the church comprises a group of attached structures, in the arms of the chancel and south transept. A short, straight ambulatory, south of the chancel gives access to a semi-octagonal east stairway. This joins the three floors there, which contain a chapter room beneath the sanctuary, the choir vestry and a WC, all at lower ground floor; the vicar's vestry and sacristy above; and the organ in a loft above the ambulatory, and the tower at first floor level. The architectural style of this part is late Art Nouveau, especially its fenestration. The vicar's and choir vestries are within the tower's structure that abuts the south transept. Above, there are two spaces, one containing the organ blower and the next above, general storage. The belfry, above again, contains a single, tolling bell in a timber bell-frame, and an access ladder to the roof. The roof has a battlemented parapet, a flagstaff and a cross, illuminated at night, which is a local landmark serving also as local reminder of the church's presence.
×