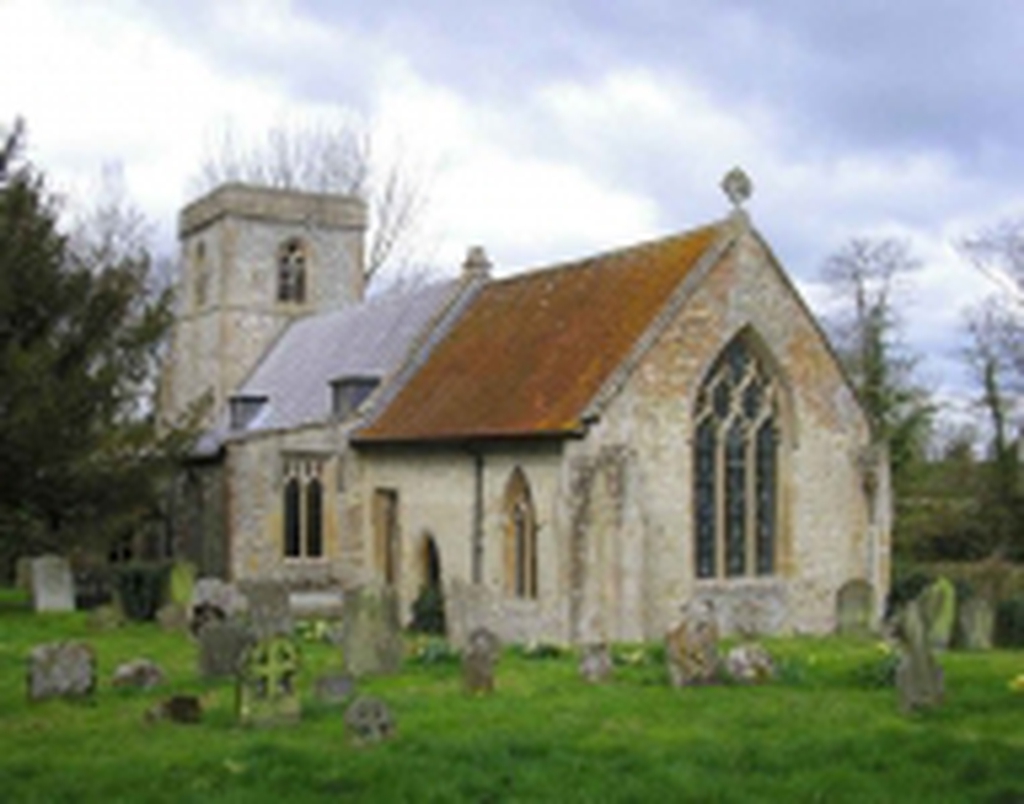 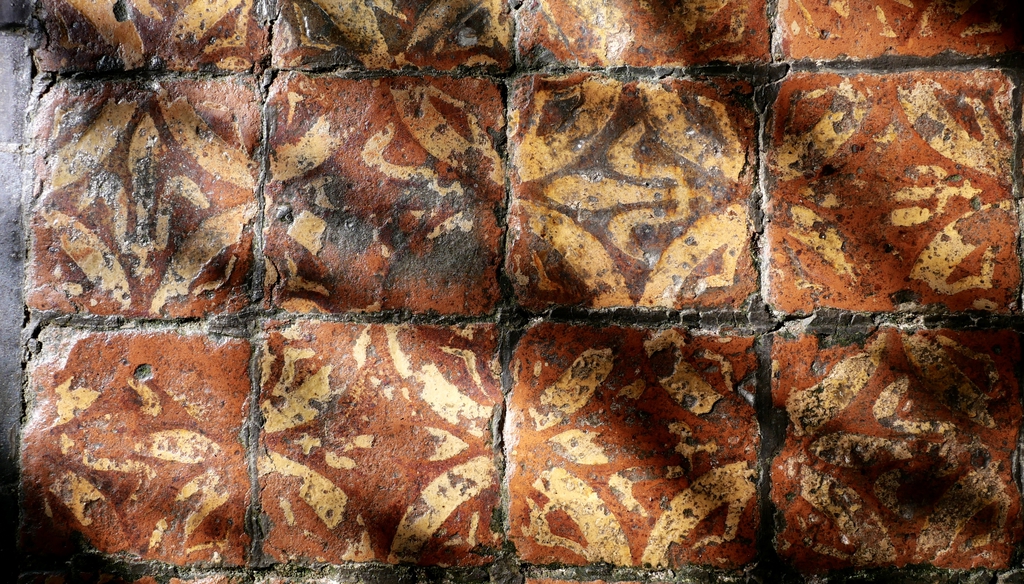 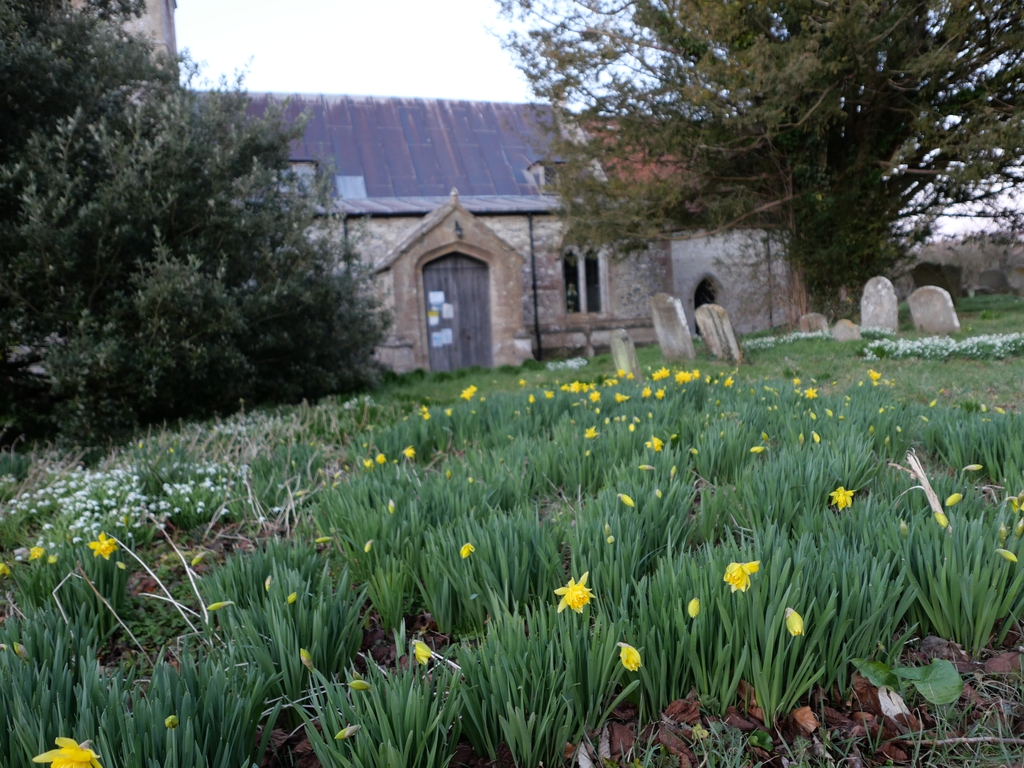 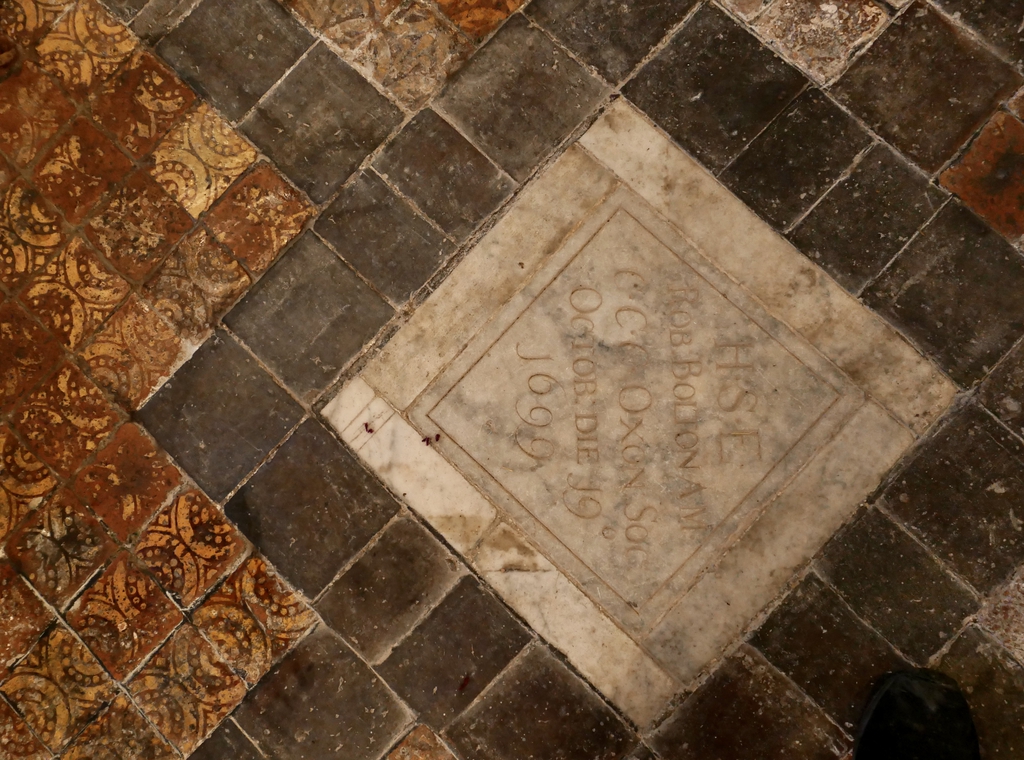 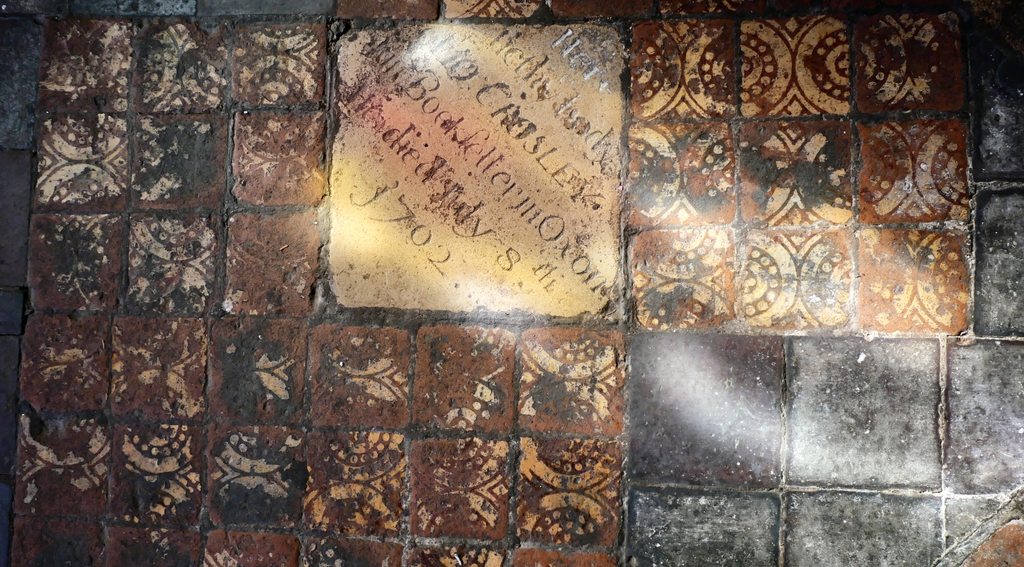 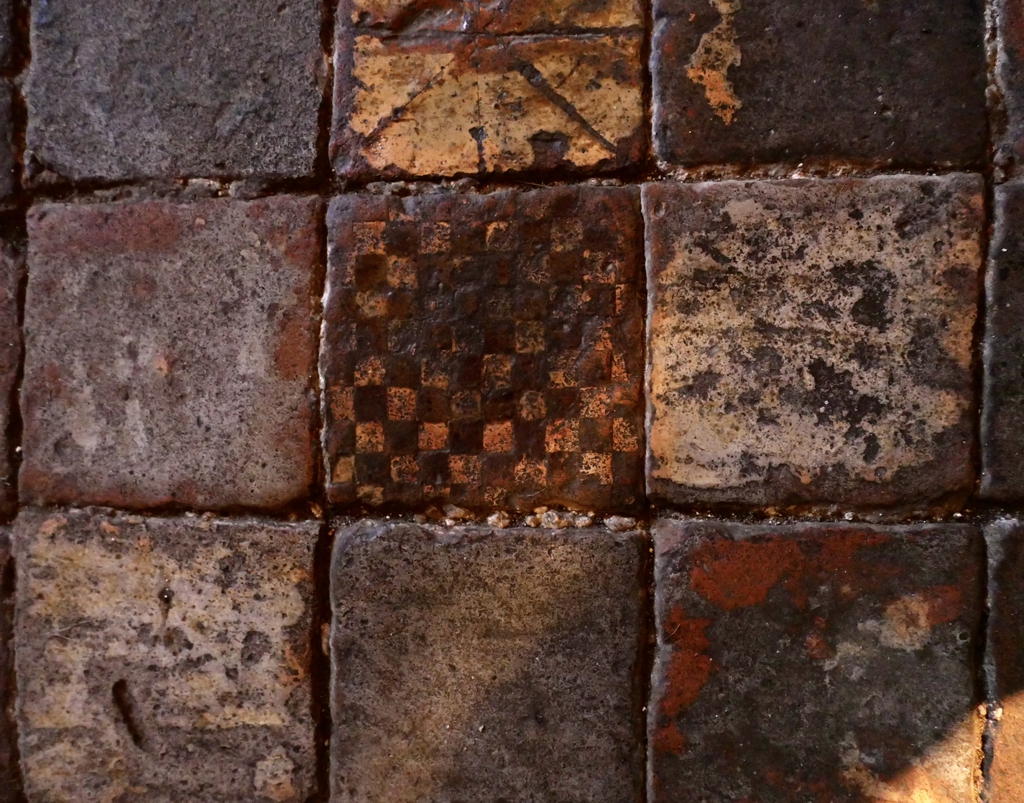 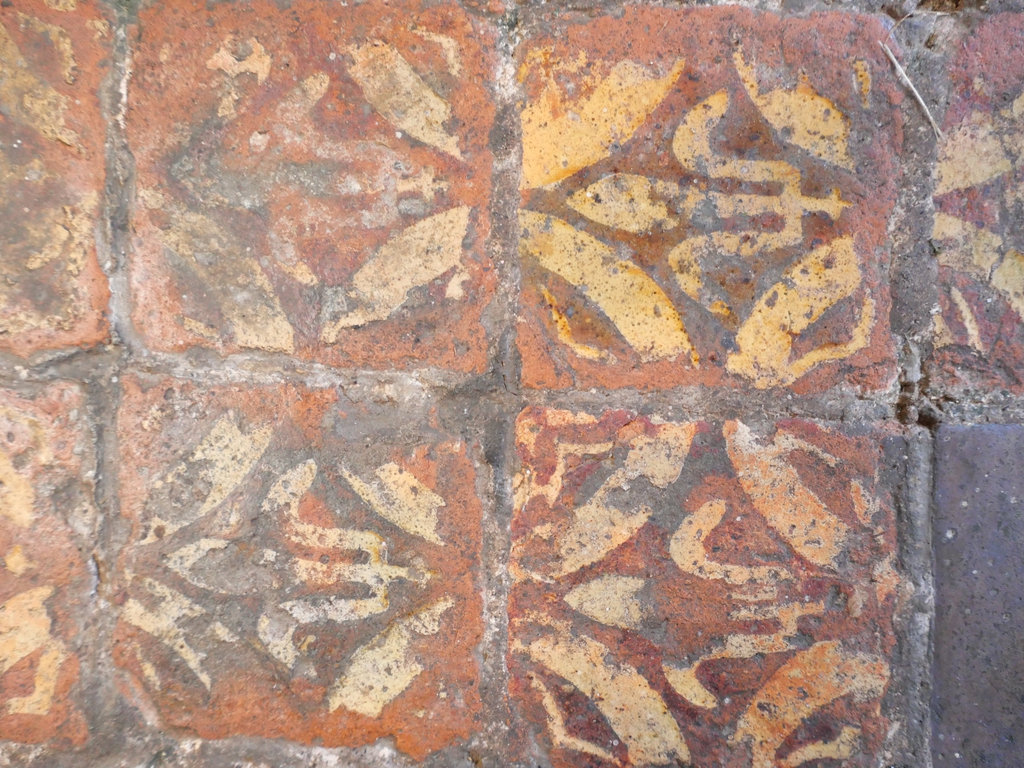 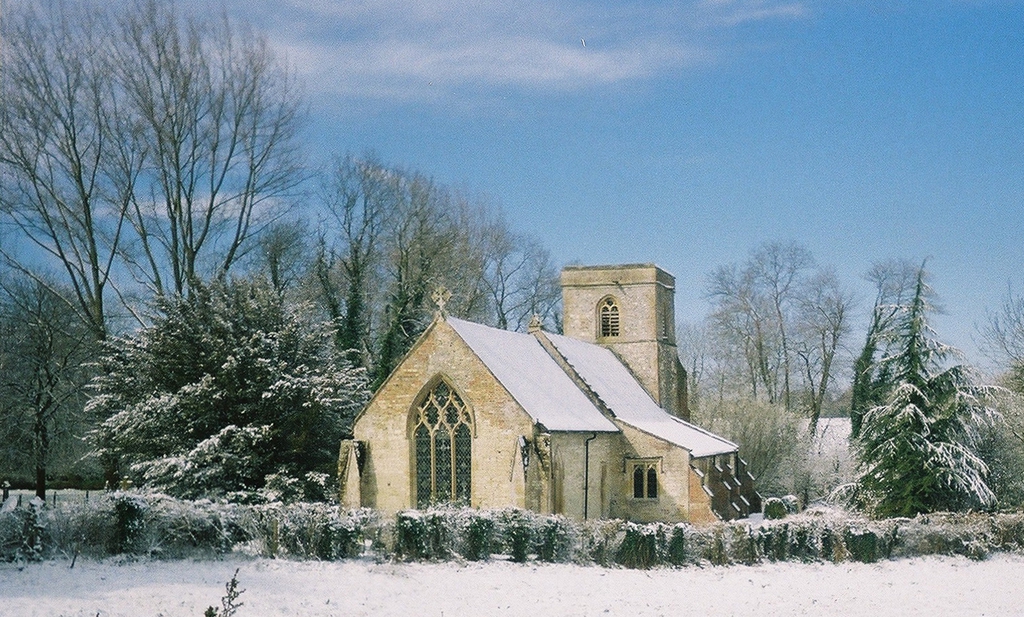 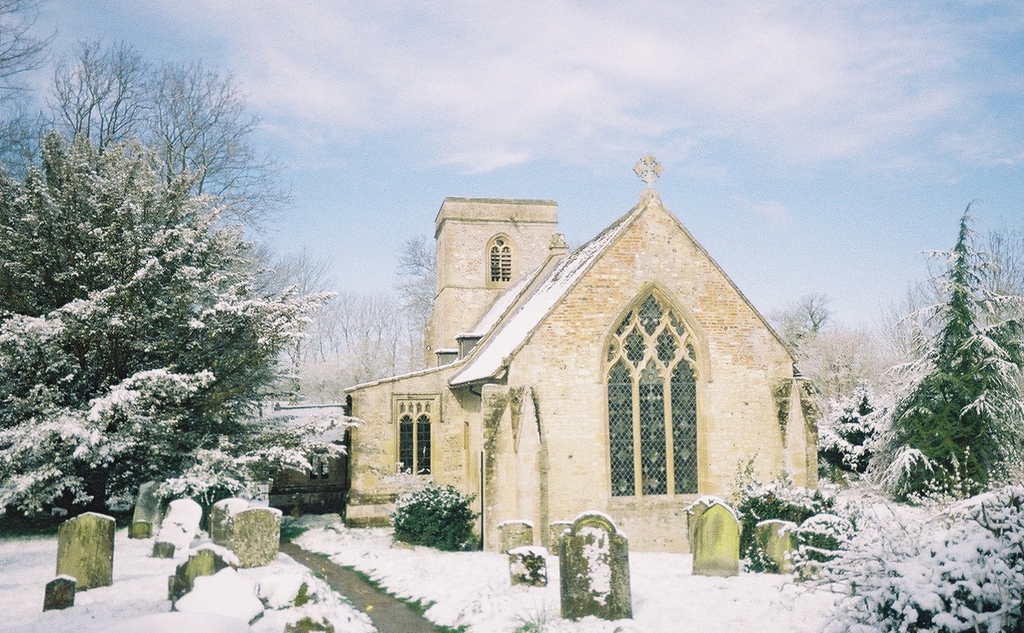 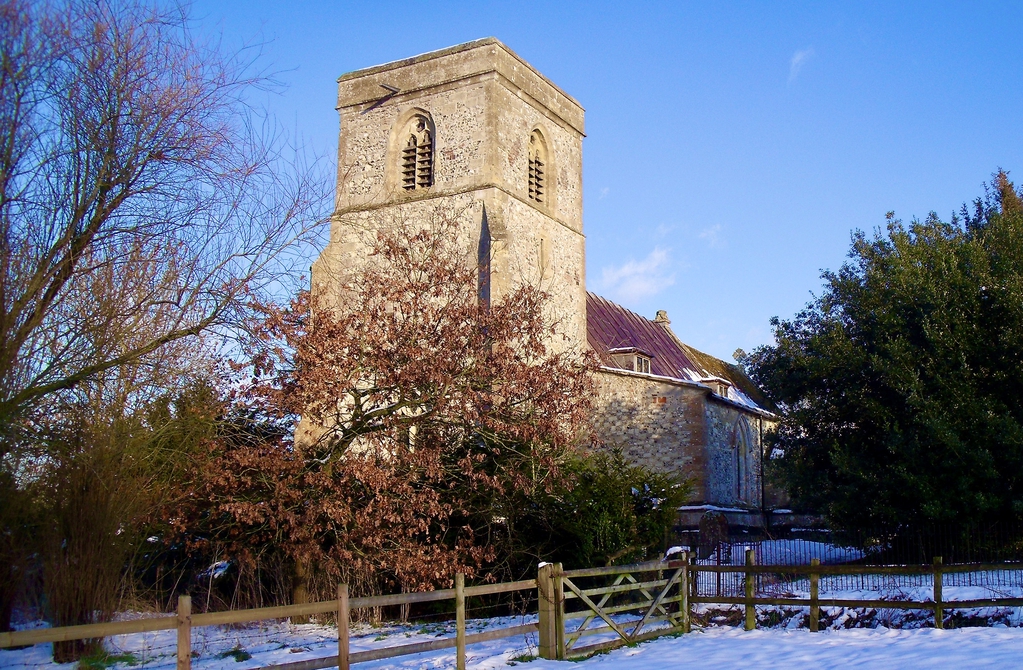 Building History (including architects and artists)

The church appears to have been entirely rebuilt in the C14. The chancel was rebuilt as it is today c 1320, and the nave, aisles and, and western tower between 1390 and 1410; this is all of the late Decorated period. The southern porch was added in C15. Little alteration has been made in the structure since that date.

The church has been little restored. The roof was partly renewed in the C17 and C18 (from ref[8]).

The main addition is a row of C19th? buttresses to the Nave’s North Aisle.

Significant events and personalities associated with the church

Significant repairs were done to the church in the 1740s, especially the roof, after Sparsholt Court Manor was destroyed in 1721.

A careful restoration was done in 1929 by Philip Mainwaring Johnson, F.S.A. (from JS), by the efforts of the then Vicar, the Rev. T Tattersall and his wife; a tablet to the west of the south door commemorates this.

The church is of ashlar stone plinth, with a moulded top to the south aisle porch and tower. The walls have an irregular flint and chalk mixture as well as some brick (from ref[3] and ref[4]).

The interior walls are protected by a coat of rough-cast plaster, which has been repaired at various times; the date of one repair is given on a panel high up on the south wall of the tower as 1745.

The church is entirely of Decorated period, and consists of a 3 bay aisled nave, and a two bay Chancel with nice, steeply gabled buttresses. The nave’s arcade of three bays have octagonal piers and double-chamfered arches (from Pevsner see ref[1]).

The North Aisle has a late C14 east window of two lights under a square head. The north wall has two late C14 windows of two lights, and between them, at the transept, there is a sealed up doorway which is pointed and chamfered (from ref[3]) .

The South Aisle has a square headed C15 east window of two lights, and flanking it are two semi-octagonal stone brackets. The South wall has two pointed early C15 windows, both of two lights, and between them is a plain pointed doorway. At the east end of this wall is a piscina with a shelf and a four-centred head (from ref[3]).

The C15 south porch has a four-centred outer archway with a wide hollow chamfer and has a two-light trefoil-headed window in each side. The gabled roof of stone slabs is supported by a chamfered rib forming a pointed arch (from Listing ref[3]) .

The west tower is three stages high, of late 14thcentury date (Decorated), and has diagonal western buttresses of ashlar rising to the base of the bell-chamber; it is finished with a plain ashlar parapet having a moulded string-course. The tower arch is pointed and of two hollow-chamfered orders dying into the side walls (from Pevsner ref[1] and VCH ref[2]).

The gabled roof of stone slabs is supported by a chamfered rib forming a pointed arch. The exterior of the church is covered with cement, that on the tower bearing the initials and date 'W.T., I.G. 1744' on the south side; the south aisle, porch and tower have a deep moulded plinth, but the plinth of the remainder of the building is a plain chamfer (from VCH ref[2] and Listing ref[3] ).

The nave roof is of the trussed rafter type, ceiled and having three massive tie-beams (one dated 1746), and is covered by lead rolls from the 1929 restoration. The chancel has a braced collar-truss common rafter roof, which is plain tiled. (from Listing ref[3]).

There are many mediaeval encaustic slip-ware tiles of simple design in the chancel and centre and south nave aisles (from Pevsner ref[1] and VCH ref[2]). These were re-positioned in the 1929 restoration.

Some of the tiles may have come in the C18 from Sparsholt Court Manor, after it was destroyed in 1721.

On the porch and on the south buttress at the corner of the chancel are three (one above another) and by the door of the chancel, there are scratched rough sundials, or “mass-dials” (from ref[5] and ref[7]).

The lychgate was added in the 1970s, of modern brick base, upper portion of wood with a tiled roof.

The Churchyard is open; burials since the c 1950s have been in the Cemetery, which is located nearby, along a path off the Ginge Road, c 100 yards due south of the Church’s small lane.

The Altar is a Jacobean communion table, with turned legs and a carved rail; the rails are also of the 17th century and have turned balusters (from VCH see ref[2] ).

To the right of the altar, there is a four-centered trefoil-topped pisciha with a shelf (from VCH see ref[2] ).

There are some late C19 or early C20 (probably from the 1929 restoration) encaustic tiles to the upper step of sanctuary (from ref[3]).

There is Jacobean re-used panelling on the East wall (from ref[4] ).

The pulpit of the same date is hexagonal from the ground up and has panelled faces with good conventional flowers and foliage(from VCH see ref[2] ).

It is spacious and paneled right to the ground, i.e. without foot or stem(from Pevsner ref[1] ).

The lectern is from the (probably mid twentieth century), and has no particular significance.

The C15 font has a plain octagonal bowl and stem(from VCH see ref[2] and ref[8] ). The font’s lower pedestal has been positioned at a later date than the South Arcade’s pier.

There is a wood octagonal pyramidal cover capped with an acorn and having carved panels, one being inscribed 'A.D. 1630 I.P, TS.' (from VCH see ref[2] and listing ref [3] ).

The east window contains a considerable amount of 14th-century grisaille glass with a head of Christ in the upper part. Some similar glass remains in the head of the first north window, and there is some old glazing in the south window opposite. Fragments of old glass also remain in the heads of the north aisle windows, and in one of them the crowned initials E.S. occur twice. The east window of the south aisle has old yellow glass in the head (from VCH see ref[2] ).

In the South Aisle, the east window has four small upper lights which contain emblems of the four evangelists. St. Mark with his lion is at the extreme left; then St. Matthew, whose name can just be read; then St. Luke and the St. John with his eagle (from ref[7]) .

In a small light of the westernmost window of the South Aisle is the engraved inscription “C. Parker glazed this church in 1784 and glad of the job” (from ref[7] ) .

In the North Aisle, the westernmost window contains the initials ES, which stands for Edmund Sparsholt (from ref[5]) .

The west window of the tower is of two lights under a pointed head.

Dormer windows were added to the South Nave’s roof in the 1929 restoration (photographs in ref[5] ref[8]).

The remains of a wall painting can be seen above the chancel arch. There is a small plinth, with faint wall painting surrounding it. Above the plinth is an unpainted area shaped like a small figure; this probably had a small statue roughly one foot high, of the Madonna.

Above one of the pillars on the north side of the nave can be discerned an angel and some lettering.

There are original consecration crosses in the walls of the North and South Aisles (from Listing ref[3] and ref [5]).

None are specifically noted in VCH, the Grade I listing, or in Pevsner.

There are six bells:

It is a pipe organ, with 1 manual and pedal board, with 7 stops.

It was completely rebuilt by the original builders (now part of J. W. Walker & sons) in 2001.

On the left of the door where one enters the church, is a low bench; this was probably part of its original seating (ref [5]).

In the nave are C15 fronts to the rear rows of pews, with four-centred panels in front with intersecting ribs. (from VCH see ref[2] and listing ref[3] )

At the West end of the north Aisle are three straight-topped pew benches with tracery (probably of medieval or Tudor period); at the end of one of them is a beautifully carved bench end possibly of the 14th century, with window tracery paneling and a wheel in the head, which was formerly coloured (refs [1], [2],[5]). These pews also have more recent machine sawn timber pieces, so presumably post C18. These pews appear to have been shortened (pre March 1933).

There does not appear to be any historical significance in their location. The VCH (ref [2]), published in 1924, states “At the west end of the north aisle is a vestry screened off by Jacobean panelling, including some carved frieze-work, but all much displaced.” The vestry screening is no longer present. Pevsner does not refer to this, nor does the Listing (1968).

The VCH (1924) states “In the nave are some bench fronts, probably of the 16th century, with four-centred panels in front with intersecting ribs. There is also one good bench end, possibly of the 14th century, with window tracery panelling and a wheel in the head. Other benches are plain and solid.”.

The March 1933 description (ref [5]) states “At the west end of the north aisle are some old pews of uncertain date: at the end of one of them is a beautifully carved bench end, formerly coloured: it looks as if it had originally been part of a screen.”

By deduction, it would appear that, as part of the 1929 restoration, the Medieval pews in the North Aisle were previously located in the Nave, and shortened to fit within the available space in the North Aisle.

Re-ordering of the medieval pews and woodwork in 2014

The re-ordering consisted was for a re-arrange the late C14 pews in the North-West Quadrant. There does not appear to be any historical significance in their location. They were fixed to the floor by modern angle brackets; they were moved and replaced when the North West Quadrant’s floor was replaced and the Organ refurbished in 1999. The re-arrangement was carefully designed, so that the medieval carved pew end of one pew continues to be easily seen, and for the other two medieval pews to be well viewed, and the seats used.

There is re-used panelling (dated 1630) in the readers desk. The other parts of the east side Choir stalls, and the entire west side choir stalls are dated 1931.

Most of the pews are from C19th or early C20th (probably from the 1929 restoration), made of pine; they have no particular significance.

The altar rail is late C17, with dumb-bell balusters (from Pevsner ref[1] ).

ARDINGTON & LOCKINGE in [Vol. 24. No. 1.] - [April and July, 1918] of Transactions of the Berkshire Archaeological Journal (in conjunction with Newbury District Field Club )