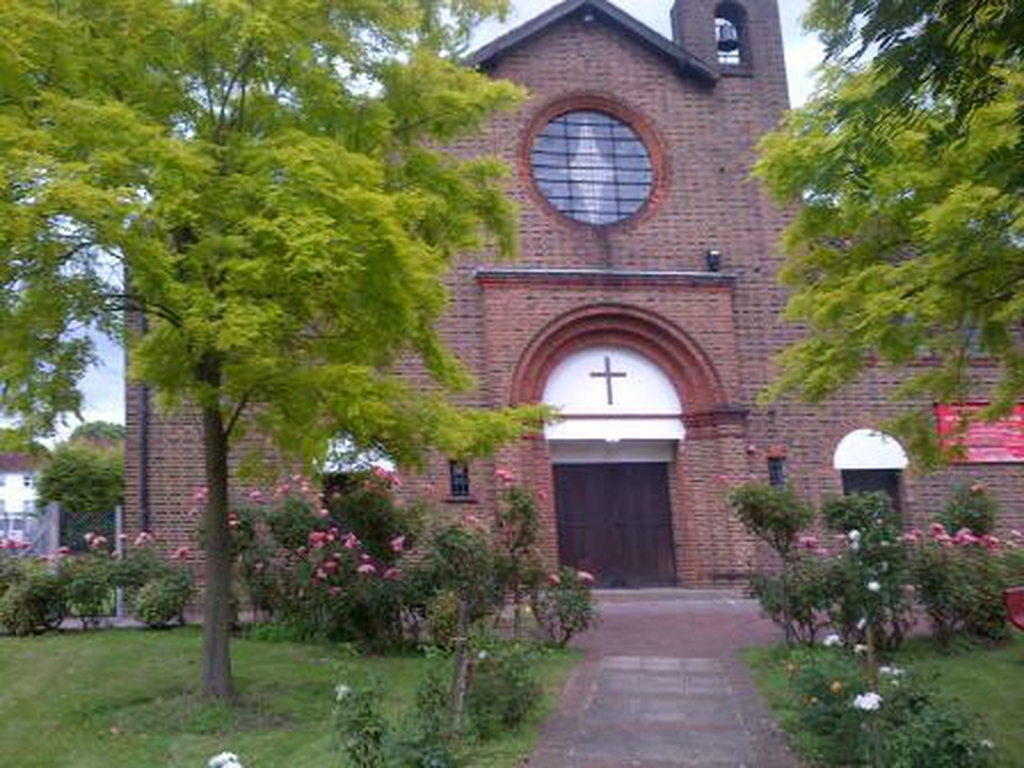 Downham, St Barnabas
Services and events
News and notices
About us
About the church
Find us
Downham Way Bromley
Get in touch
020 8698 0283
Facilities
More information
Edit this Church

The church was built as a traditional basilica in plain Early Christian Style. The plan is almost completely symmetrical with a central double height nave, which has a shallow double pitch roof, flanked by two flat roofed single height aisles. At the west front of the church there is a double height narthex with transepts either side of the main entrance. These also have shallow double-pitched roofs at right angles to the main aisle roof but at a lower level and terminate in gable ends.

The external appearance of the Church is very simple with a mottled red brown brick being used throughout, in conjunction with red brick and tile dressings to windows and doors. A red brick cornice runs at high level down both of the aisle walls. The aisles do not run the full length of the building but return back into the nave towards the east end of the church. The front elevation of the church features an attractive red brick semi-circular arched portico with a circular window above also lined in moulded red brick. The pitched roofs of the church are covered in traditional Roman red pantiles. A small brick built bellcote projects above the main aisle roof on the right hand side of the front elevation. The doors to the church are in plain oak with vertical tongued and grooved boarding and wrought iron strap hinges.

The interior of the Church echoes the basilica like appearance of the exterior. The roof has exposed king post trusses with decorative painted boarding above. The nave is separated from the aisles by massive stone circular Romanesque style columns supporting equally massive plain rectangular beams running longitudinally. These have a deep projecting cornice above with deeply recessed segmental arched clerestory windows over. The aisle windows are similar but taller. The east end of the church has a large circular window at high level similar to that on the front elevation. The aisles are flat roofed with closely spaced rectangular beams exposed at ceiling level. With the exception of the columns, all interior masonry is plastered and painted white. The floor has quarry tiles to the central areas of the nave and aisles with wooden parquet between. The nave and high altar are on raised platforms. The area surrounding the high altar is floored in stone. A glazed screen in wood and metal separates the entrance lobby from the church. Above the entrance lobby there is a full width gallery that is open to the church. The gallery is approached by two similar stone staircases at opposite ends of the narthex.
×