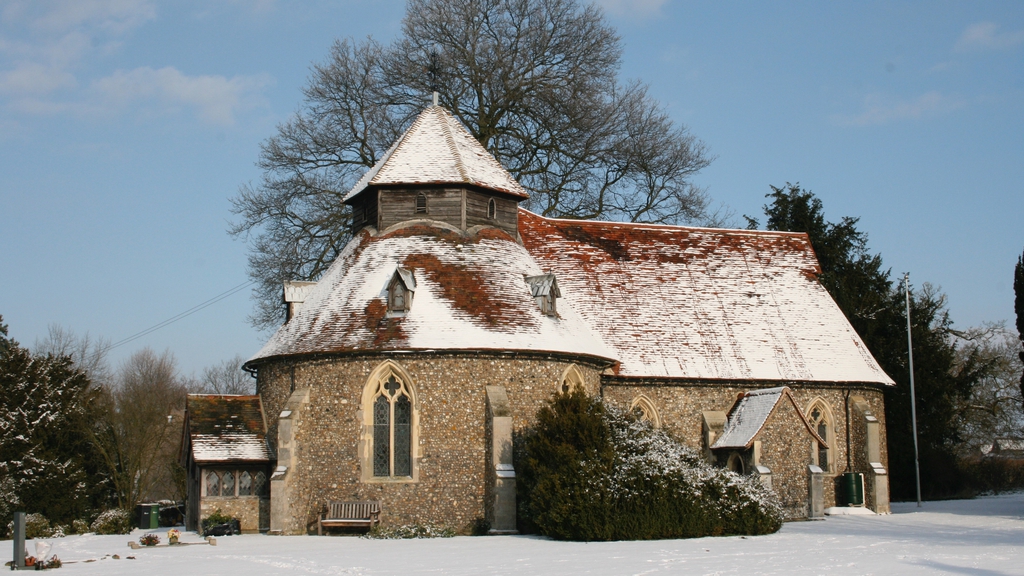 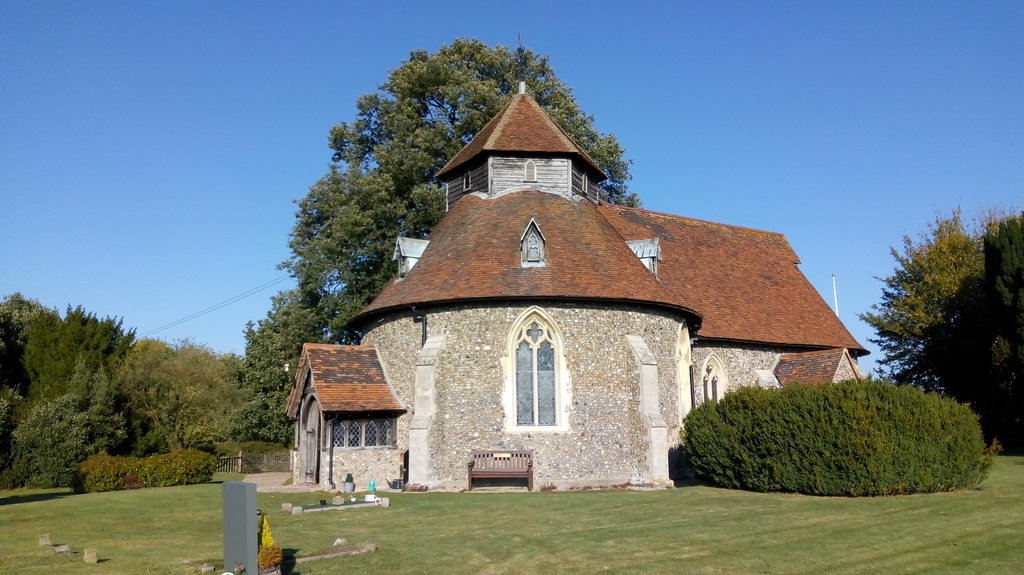 Little Maplestead: St John the Baptist
Services and events
News and notices
About us
Find us
The Round Church, Church Road Little Maplestead Halstead
Get in touch
01787 460273
Facilities
More information
Edit this church

The Domesday entry for 1086 records the existence of one priest in Little Maplestead. This suggests that twenty years after the Norman Conquest, there was an established church on the manor. This early church would have been a simple rectangular building, perhaps with a newly apsed end, most likely standing on the same site as the present church.

The Church of St. John the Baptist in Little Maplestead is one of only four round churches still in use in England. It was built on a site given to the Order of the Knights of St John of Jerusalem, known as the Knights Hospitaller, and is still associated with the Order today. This Order was originally established in 1092 in Jerusalem with the building of a hospice to accommodate pilgrims visiting holy places and was first introduced in England in around 1144. Both the Knights Hospitaller and the Knights Templar built round churches, the design being based on the fourth century rotunda of the Church of the Holy Sepulchre at Jerusalem, which was built by the Emperor Constantine. Constantine's church was built on what is regarded as the site of Jesus's tomb and the round shape of the church is thought to celebrate the resurrection.

In 1186 the manor of Little Maplestead was held Lady Juliana, who was married to King Henry II’s steward, William Audelin. Shortly before this date, Henry had been approached by the Patriarch of Jerusalem, Heraclius, and Roger de Moulins, the Grand Master of the Hospitallers of the Order of St John of Jerusalem, who had come to seek more military aid for the ongoing struggle in the Holy Land. Lady Juliana made a gift of her entire manor and church at Little Maplestead to the Hospitallers for the purpose of establishing a preceptor there. This preceptor was intended to treat those crusading knights who had returned home sick and diseased and also to act as an administrative and recruiting centre for the order.

Although no trace of the original Knight's Hospitaller's church remains today, it is however supposed with reasonable certainty that the present church stands on the site of the church built by the Knights Hospitaller around 1186. The present church was probably built around 1335 and is the latest of only four round churches still in use in England. It is therefore of great importance historically.

The church was dramatically restored between 1851 - 1857 when most of the old details were renewed or replaced. It is possible to read what was done in the old minute book of the Restoration Committee which is still in existence. The external walls were completely refaced and the windows and buttresses were renewed. A new roof was added to the chancel and circular aisle, the hexagonal wooden belfry was rebuilt and the old western porch was replaced with a smaller one. The interior stonework was scraped and much new stone added. The present font was also discovered during the restoration work. It is the most ancient feature in the church and probably dates from 1080. The bowl was originally square but the corners were later cut off, probably during the 16th century. The font was probably intended for total immersion baptism as was the custom in early Norman times. The western face of the font bears a carving of St Andrew's cross. As St Andrew was possibly the first bishop of Byzantium this may account for the presence of his symbol.

The Round Church still retains close links with the Order of the Knights of St John of Jerusalem today. Every year members of the Order can be seen in procession, clad in traditional full robes, on the first Sunday in June. The Order was originally founded to give medical care to sick and injured crusading knights and became today's St John Ambulance service which is the UK's leading first aid provider and training organisation. The Maltese cross of the Knights Hospitaller still forms part of the service's livery and also features on the traditional robes of the Order.