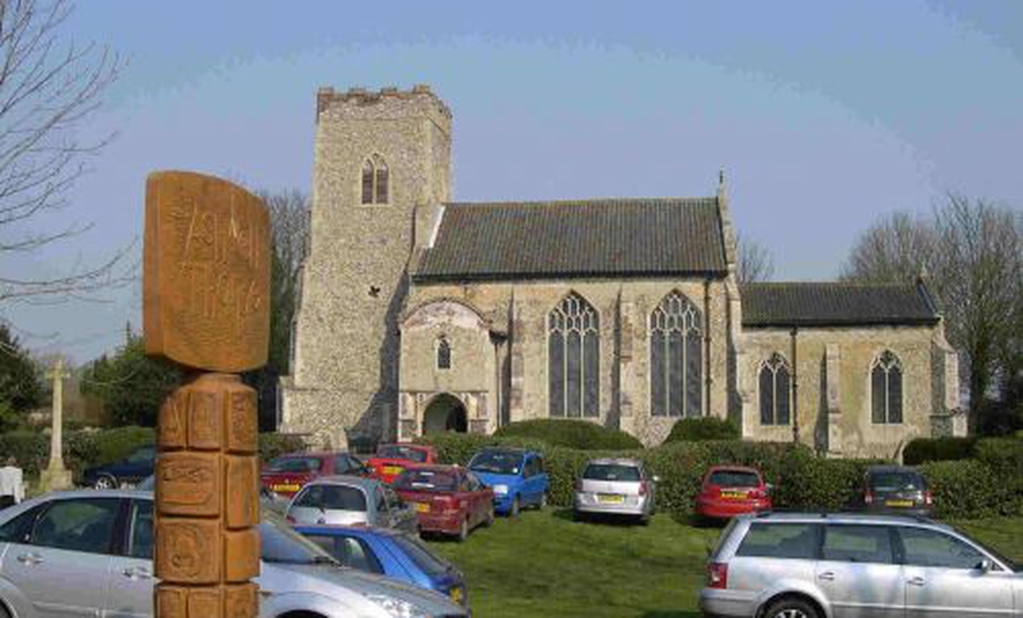 Ashwellthorpe: All Saints
Services and events
News and notices
About us
Safeguarding
Find us
The Street, Ashwellthorpe Ashwellthorpe Norwich
Get in touch
01953 788227
Facilities
More information
Edit this church

The Church probably dates from the 13th century and consists of a square tower with quatrefoil sound holes, heavy buttresses and chequer work battlements .
There is a Perpendicular porch with 18th century Dutch gable and a holy water stoup with an ogee canopy.
There is priest's chamber over the porch which is reached by a stone staircase.
The nave is Perpendicular [very high for its length] a chancel and side chapel.
The gem of this church for which it is well known is the alabaster tomb of Sir Edmund de Thorp and his wife Joan which lies between the chancel and the side chapel. Sir Edmund was slain at the siege of Louviers castle in Normandy in 1417 fighting with Henry V. His body was brought back home form the battlefield to be buried in the chapel which Sir Edmund built for his own burial place and that of his successors.
Both the knight and his lady wear the privileged collar chain of 'Ss'. Angels bear her pillows and dogs play at her feet, Sir Edmund's head rests on a mighty helm and plume. Over the centuries quite a lot of graffiti has been added by various hands. A few years ago the tomb underwent a substantial and costly restoration to save and preserved it for future generations.
There is an octagonal font with carved shields erected by Thomas Knevet [1596-1658] and Katherine Burgh his wife.
There are five bells in the tower though these are not rung. There is a wooden ladder in the tower to access the bells which is inscribed George Ward churchwarden 1677 at the top.[The typist did not check this].
There are three perforated stone basins in the church in the chapel, the chancel and the nave.
The royal arms of George 111 are hung in the church.
The church registers date from 1558.
The church underwent major internal work in the 1990s when the rotting pews were removed and replaced with upholstered chairs. A brick work floor was installed and stalls made in the chancel behind the replaced screen. An interesting feature of the church is its lower level chancel.

There was an 'electrical incident' at the church at the beginning of September 2009 but much careful cleaning and refurbishment by experts has been done and the church is in use once again. A photographic replica of the medieval Ashwellthorpe Triptych was installed in the Thorpe Chapel in February 2011.