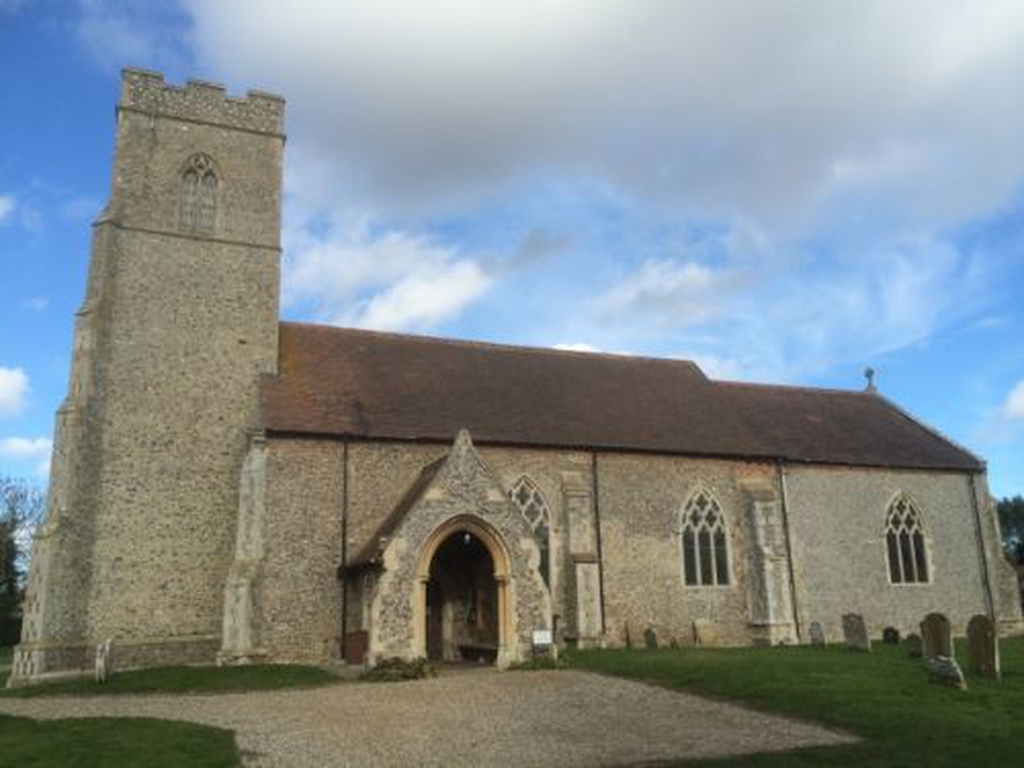 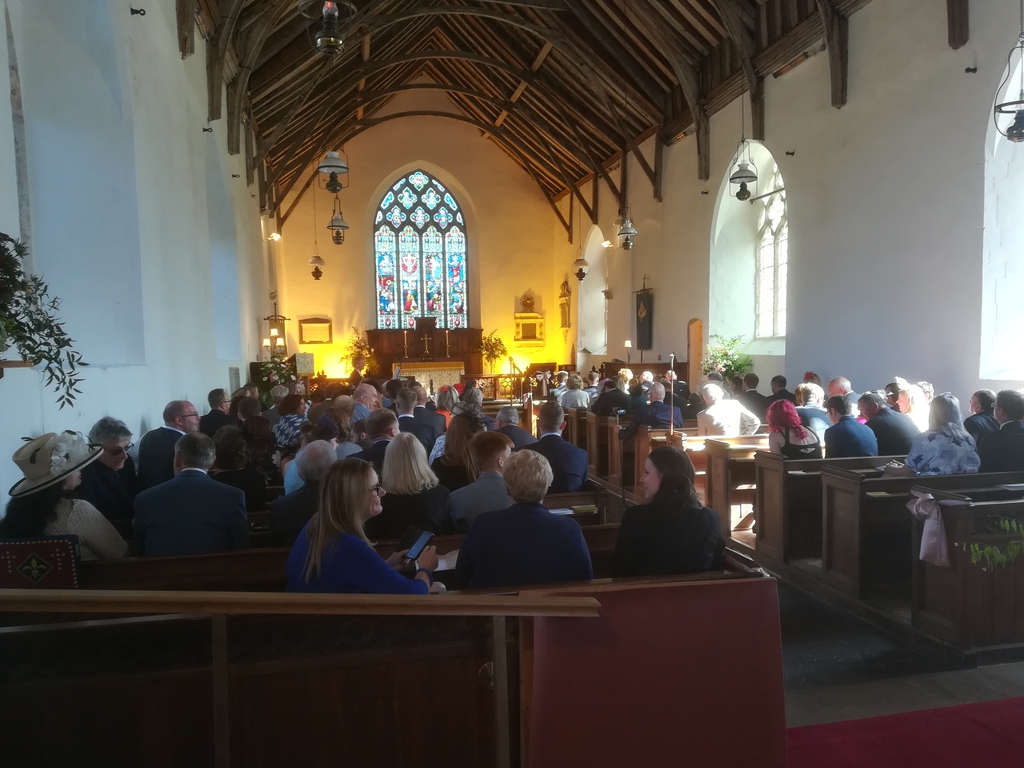 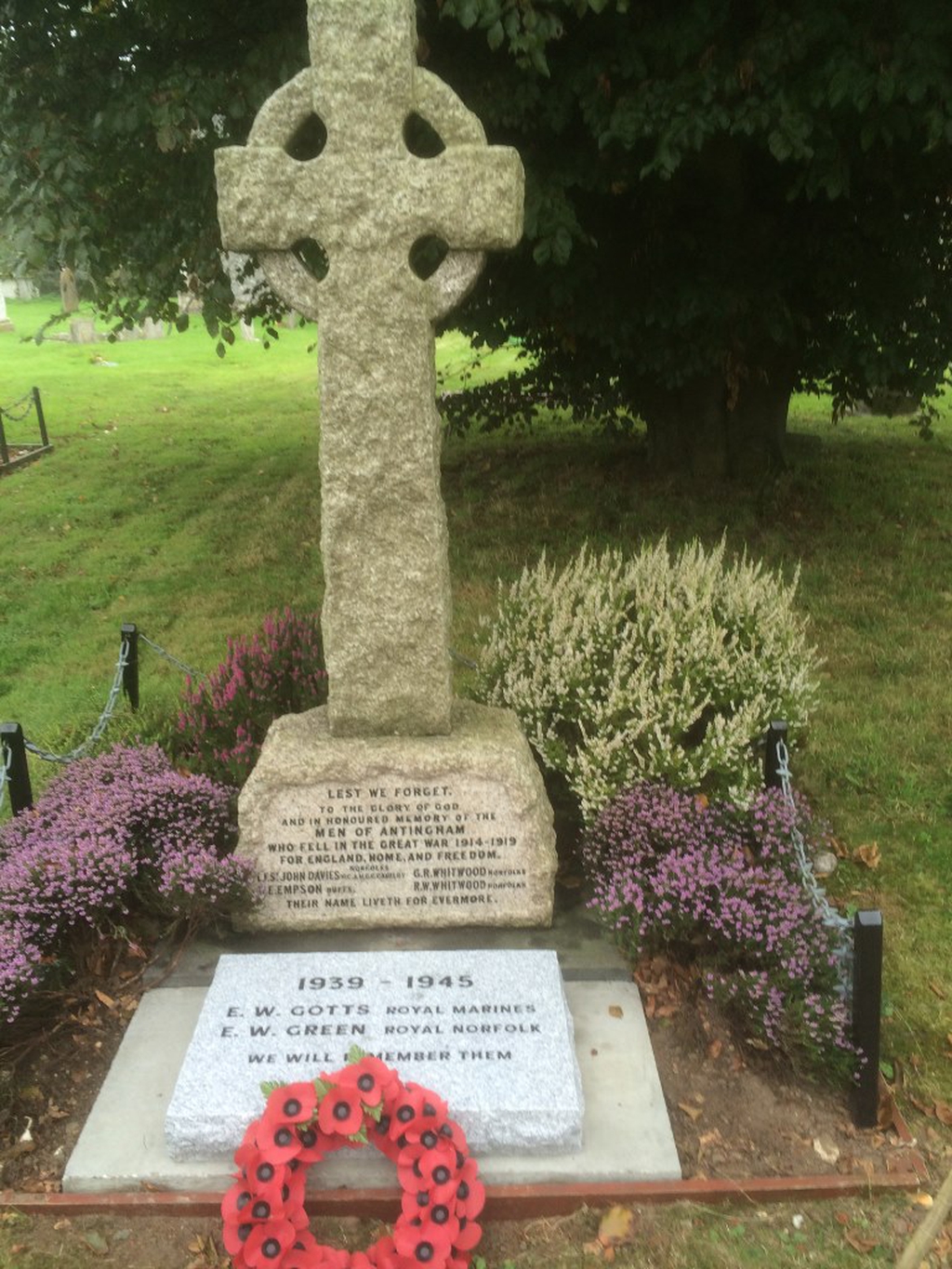 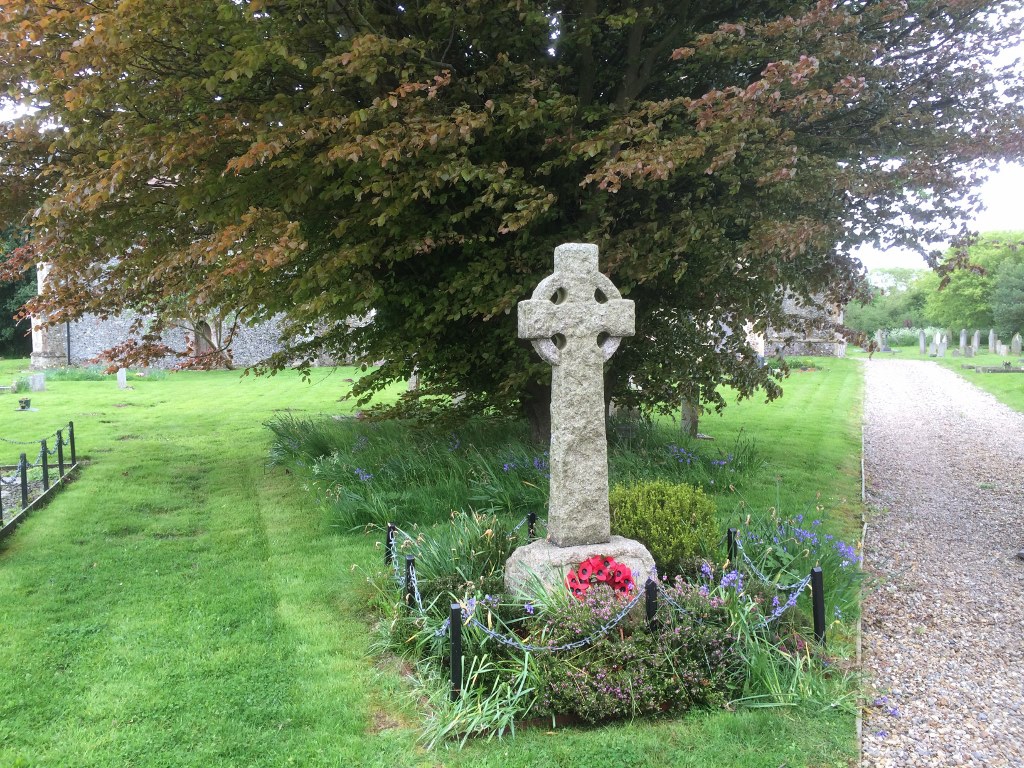 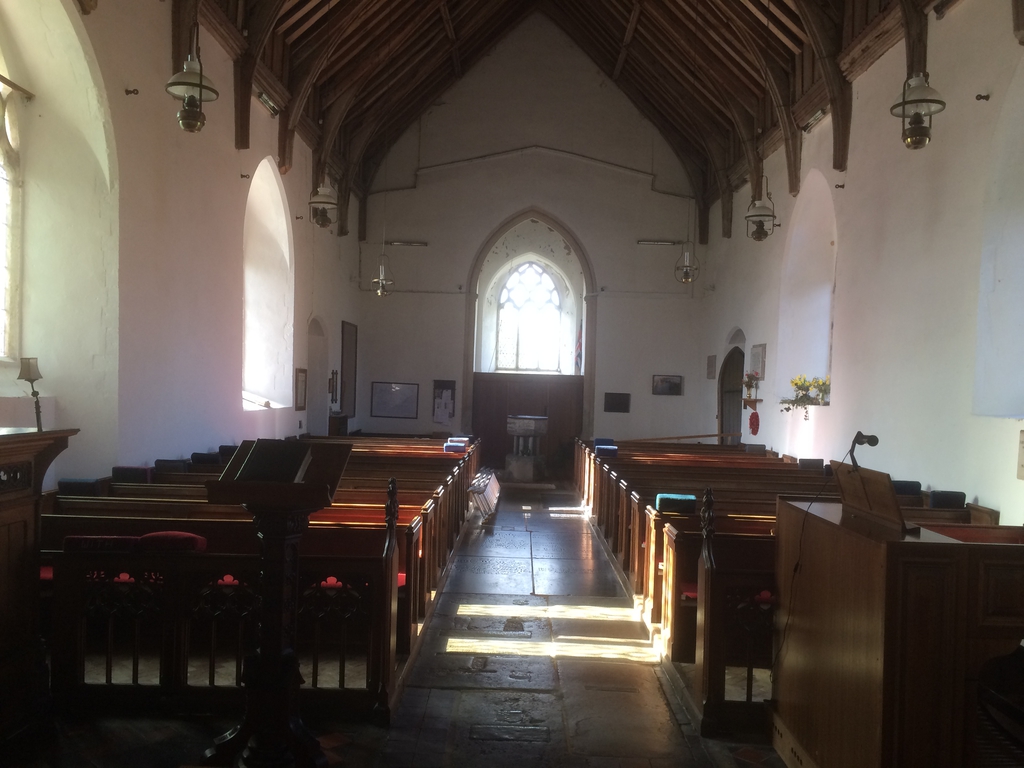 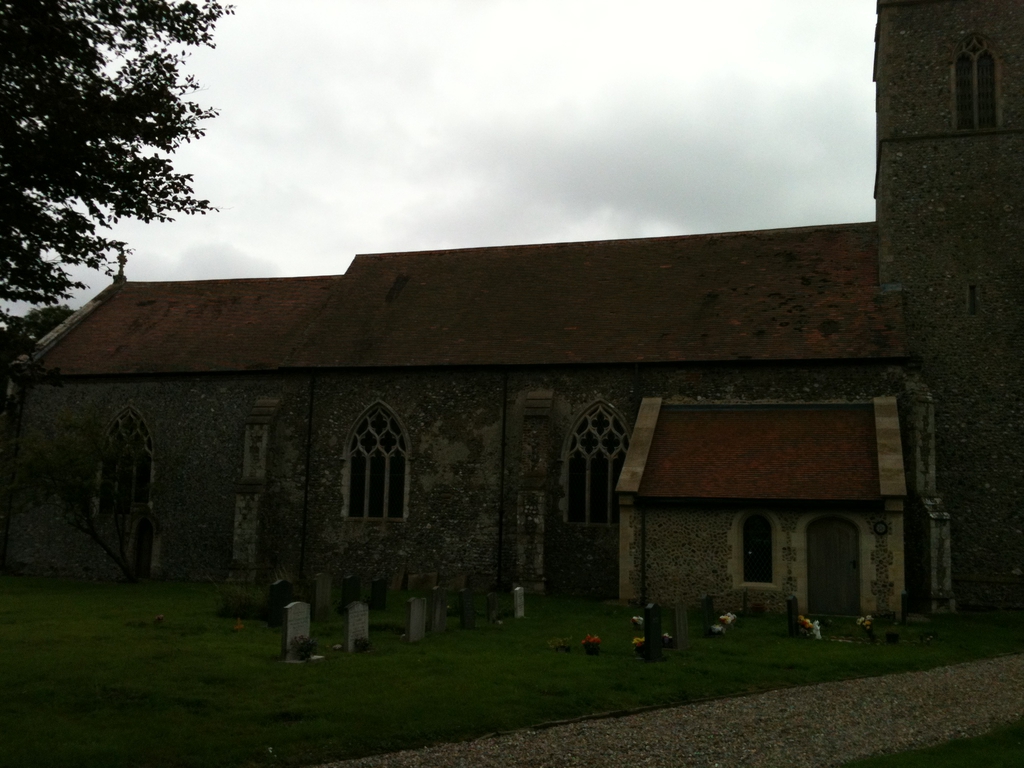 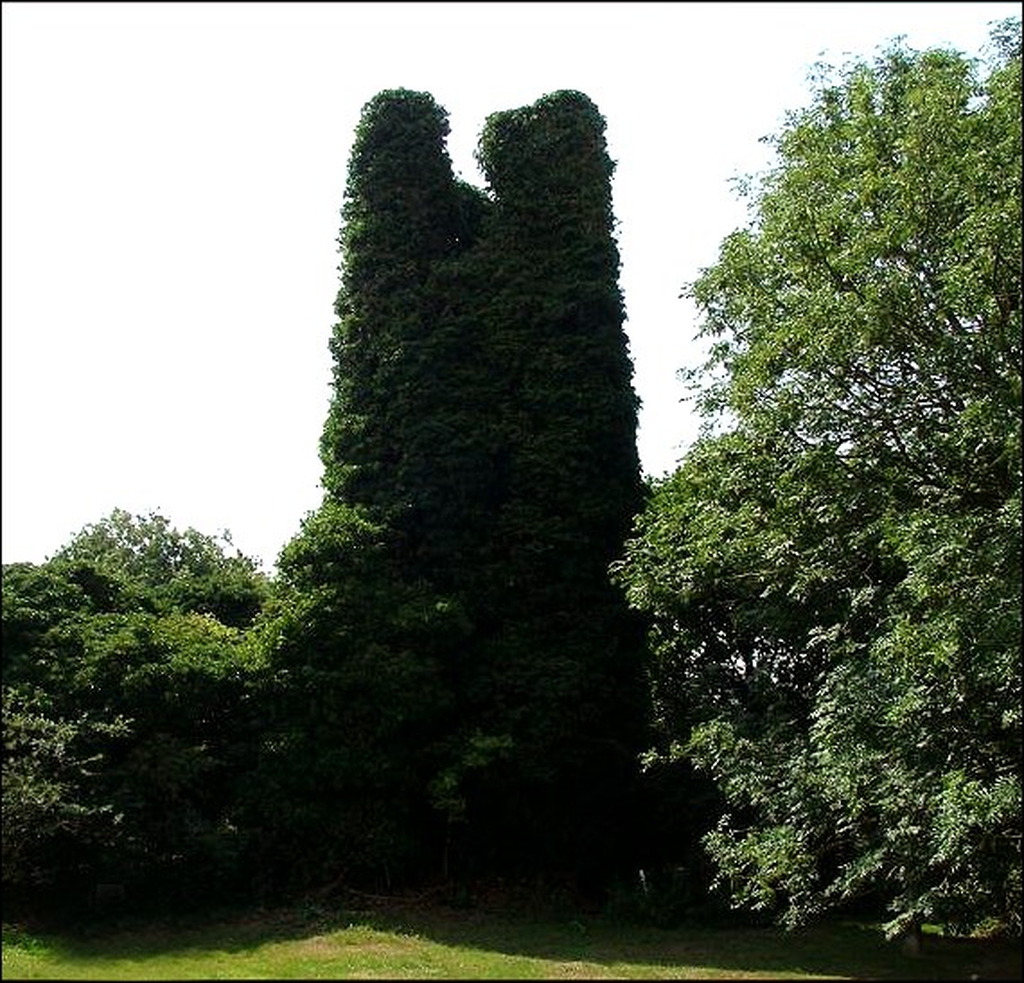 The Church of St Mary the Virgin, Antingham

St Mary’s is described as a 14th century church, with 15th century and post medieval architectural features. It was restored in 1864. The font dates to the 13th century. Graffiti in the nave south doorway includes shields with armorial bearings and possible travellers' crosses. During renovation work a 12th-century limestone coffin slab was found.

In the Domesday Book, this village appears as Antigeham. The name is not derived from the River Ant which flows nearby; rather does the, river take its name from the village. This was the ham or home of Anta's people in Saxon times. It is clear that there were at least two other manors in Antingham at this time

Blomefield's History of Norfolk traces the Lords of the Manors from before 1066. There were two manors here and each had patronage of their church.

In Edward the Confessor’s time, and at the Domesday Survey, the Abbey of St Benet at Hulme held a lordship in Antingham. This was known as St Benet’s or Antingham Chamberlain’s manor. St Margaret’s formed part of this manor. Following the dissolution of the monasteries in 1539 St Margaret's Church received no further help from St Benet's Abbey and went into decline. At the time of the reformation St Margaret’s became part of the Parish of Ludham and was subsequently consolidated with the parish of North Walsham. This consolidation formally took place in 1748 (N.R.O., FCB/2, 144), but had probably been in operation much earlier, since in 1703 a faculty was granted 'to take down the old walls of the ruined church of Antingham St Margaret provided the stones and other materials be employed to no other use but to the repairing of the steeple and church of Antingham St Mary and the churchyard walls there' (N.R.O., FCB/1. 452). Thus St Margaret's appears to have begun to fall into ruin before this date. St Margaret’s was finally consolidated with Antingham St Mary in 2003.

The other manor was granted at the Conquest to Roger Bigod who acquired the lordship over so many Norfolk manors at this time. A Norman family, de Antingham was enfeoffed under Bigod and held the manorial rights until the fourteenth century. It is recorded that Roger de Antingham, described as the King's valet, had free warren here in 1321. He may well have been responsible for the building of St Mary’s which was constructed between 1330 and 1360. The manor subsequently became known as the Manor of Antingham, Witchingham and Wallishes.

There was clearly rivalry between the manors, reflecting no doubt the lawlessness of the age, as the abbot of Holm in 1316 complained “that when he sent his fellow-monk, Roger de Neatishead, to the hundred of North Erpingham on business, Roger de Antyngham, with his brother Nicholas and others, assaulted the monk at Southfield (Suffield) on his return, took him from place to place through the town-fields, cut off the tail of his horse, and surrounded the manor of the abbot at Antingham so that the men therein could not go forth to carry victuals to the abbey for the sustenance of the abbot and convent or to do any other work; seized and imprisoned a groom riding the abbot's palfrey through the town; impounded the palfrey with its saddle and kept it without food; seized another horse of his on the king's highway at North Walsham; harassed him at Antingham by taking his plough-cattle, and in other ways, so that he has been unable to cultivate and sow his lands, and have so threatened his men and servants of the town of Antingham that they have fled away.”

It is hard to understand how the legend arose that the two churches in the one churchyard were built by two sisters. The tale says that they quarrelled and built rival churches. If it were true then the two sisters' ages must have been more than 200 years apart at the very least! Rather surprisingly, the legend is recorded by Bryant as late as 1900, so the story persisted for a long time.

The church was built mainly between 1330 and 1350 of flint with stone dressings in the Decorated style of architecture. There are hardly any later additions to destroy the sense of unity throughout the building. The windows are almost exclusively of three lights with reticulated tracery under a high pointed arch. There is no structural division between the nave and the chancel, and the tower is clearly of a date with the rest of the church. The tower arch into the nave is a very tall one. The walls continue straight through from nave to chancel which is an early feature, but there are minor variations, reflecting the different responsibilities. The priest's door is on the north side, because the Rectory was in that direction, but the porch is on the south side. So there could have been an approach from the road shared with St Margaret’s. Today we approach from the north side past a beech tree planted in 1935 for King George V's Silver Jubilee.

During the reign of Edward VI (1547-1553) the tower contained “three bells and two clappers”. In 1702-1703 the lead and thatch were in a ruinous state and the tower was ready to fall, so the Bishop granted a faculty for the sale of three bells formerly belonging to St Margaret’s (along with other materials) to help pay for repairs. In 1764 two of the three bells in the tower of St Mary’s were sold to help pay for further urgently needed repairs to the church, at which time the whole church was described as “ruinous”. A full-scale restoration was undertaken in 1864 when oak seating and a new pulpit were provided at a total cost of £430. In 1882 the porch had to be rebuilt after a storm brought it down the previous year. There is currently one bell, dated 1722, which was re-hung in 2003. An extension was added in 2009.

The roof timbers have a delightful patina, derived from their great age. The chancel roof has extra bracing with attractively curved slender timbers. The roof was rebuilt at some time. The floor follows the medieval level, which had only a diminutive step into the chancel. But in the late 19th century 3 steps up to the altar were made.

The font is typical of the 13th century, which means that it is the oldest feature here and predates the present building. It has pairs of shallow arches on each side and is made from rough Purbeck marble. It seems reasonable to suppose that the font once belonged to the church of St Margaret, though we have no evidence of the date of its removal.

The monumental brass on the floor near the Rector's desk is for Richard Calthorpe, seen lying in armour with his head on a pillow and helmet laid aside. The long inscription is in English and gives the date, 1562. The brass for his wife is missing, but its outline suggests a kennel head dress for her. The good heraldry includes the arms of Mercers' Company and the Merchant Adventurers. Below we see from left to right 11 sons, 5 daughters and 3 grand children (see also separate description). Nearby there is a second brass to Bartram Calthorpe one of his sons.

Two distinguished heads carved in stone on corbels are prominent in the chancel, but the function defies explanation, so we conclude that these stones have been moved, possibly from St Margaret’s. They may originally have been used to support a Lenten veil, a special curtain that veiled off the altar during lent.

The original rood screen between the nave and the chancel has long since disappeared but the stairs which led to the rood loft can still be seen. The location of a piscina in the wall nearby suggests that there once would have been a nave altar by the rood screen. The chancel piscina, similar to that in the nave, has a 5 leaf drain, slightly damaged at the front; it is under an arch with a pointed apex.

The 22 pews are heated by modem panels of electric heaters. There are 4 diminutive benches for children at the west end. The Victorian oil lamps remain in-situ (albeit raised for security reasons) and were converted to electicity in the 1960s.

The memorials in the church include two in the chancel to members of the Kemp family who held the manor of Antingham Witchingham from the end of the sixteenth century. John Kemp died in 1610, aged 76, who has a display of heraldry which gives the ancestry of his family, and a pretty ribbon border. Secondly William Kemp d. 1744, aged 69. He inherited some wealth from his wife's family.

The church has some interesting stained glass which is described elsewhere. It should be noticed that the north window in the chancel was curiously shortened in order to take the head of the priest's door.

A pdf version, including photographs, can be found below.