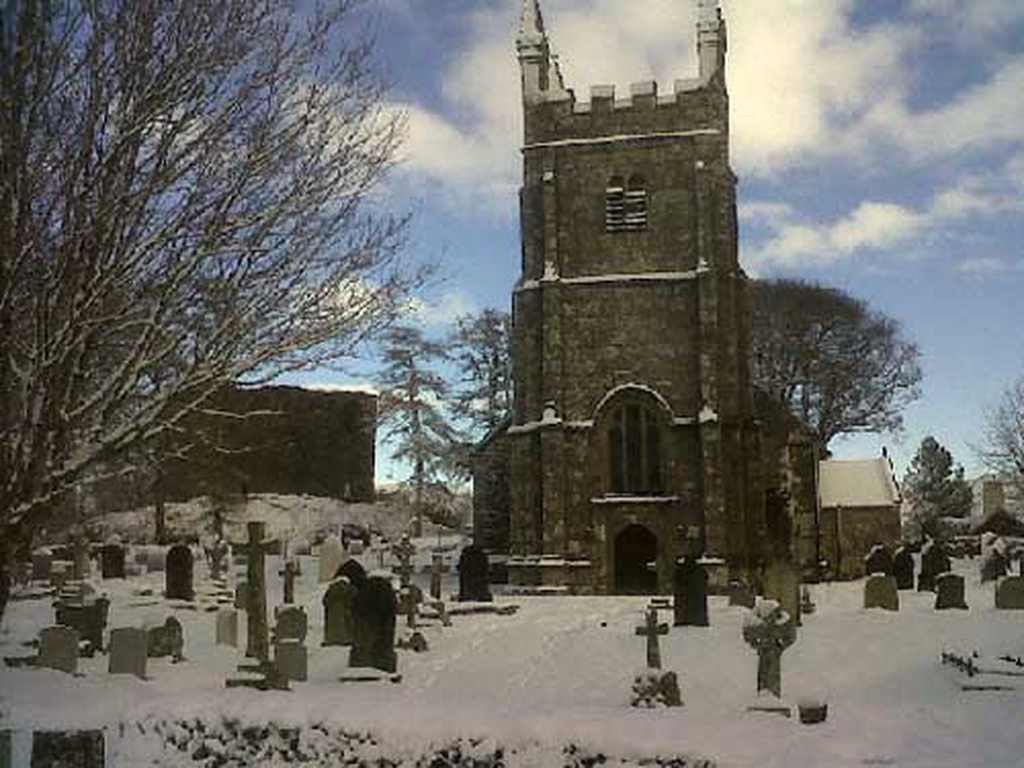 St. Petroc's Lydford
Services and events
News and notices
About us
The Good Shepherd and other St Petroc windows
Find us
Lydford Okehampton
Get in touch
01837 861580
Facilities
More information
Edit this Church
Church of England Diocese of Exeter Lydford

The Good Shepherd and other St Petroc windows


I don’t know if you have ever stopped to take a good look at the east window in Lydford church. To my untrained eye the colouring and artwork seem at odds with the rest of the stained glass, although as most of that is later, perhaps that is out of place. Certainly so much coloured glass adds to the interest of the building, but does make the interior dark on a dull day.

I recently came across the following newspaper cutting pasted into a scrapbook. Unfortunately it is undated, but could be contemporary with the death commemorated. More likely it dates from ten years later when the vestry was built and the old chancel window was built into the east wall of the new building. New tracery of the same size was then put into the main east window.

‘The curious old thirteenth century church at Lydford, dedicated to St. Petrock, has had its internal appearance further improved since the fittings were in 1873 restored at great cost by the Rev. W.H.W. Chafy-Chafy, the late curate in charge. During the past summer a handsome stained window has been fixed at the east end of the Church by Mr. D. Radford of Lydford Bridge, in memory of his late brother, the late Mr. G.D. Radford, and its bright effect has added greatly to the appearance of the otherwise gloomy and sombre-looking edifice.

'The parable of the sower is the subject of the window, and it has been very happily conceived. In the centre is the sower throwing his seed broadcast over the rocky ground, while over his head hover birds awaiting an opportunity for picking up some of the scattered seed; the tares and other weeds are on the left side of the figure, two yoked oxen being introduced in the background as a relief; on the right side is the good ground, as is shown by ripe standing corn and reapers, while at the bottom is the following inscription: “In memory of George D. Radford, of Plymouth. Died July 26th, 1879.”

'The work was executed by Messrs. Fouracre, of Stonehouse, and although the peculiar style of the old window into which the glass has had to be fitted does not show it off to advantage, the admirable manner in which the subject is treated, and the taste with which the colours are arranged reflect the highest credit on them.’

Although the window is clearly visible the inscription mentioned is at the bottom and is hidden behind the wooden reredos, erected in 1923. The window is seen to best effect early in the morning with the newly risen sun shining through it, just as the west window in the tower is best seen with the evening light pouring through it. Seen from outside the east end it looks as though the lights inside the church are all lit. As I am sure I have mentioned before this depiction of the crucified Christ was first installed as the east window of Princetown church, but when that church was enlarged the window became surplus to requirements and was made part of St. Petroc’s in 1902.

I imagine that early stained glass, like mediaeval wall paintings, were not only expressions of artistic merit and imagination but also useful teaching aids to remind the largely illiterate congregations of biblical events. It is not surprising perhaps that even by the end of the nineteenth century and later, when many more people could read and write that the depictions have not changed much from those executed centuries before. Perhaps here is one of the problems of the church, it has not proclaimed the essential message of a living, present day God strongly enough, but has tended to live in the past.

Much of the stained glass was given by the Radford family in memory of deceased family members. The window replacing the priest’s door in the chancel wall, blocked during the restoration of 1887 and visible from the main path, is said to contain fragments of very old glass, some reputed to have come from Salisbury cathedral. The window nearest the east end of the church, showing the meeting of Jesus and Mary after the death of Lazarus, is in memory of Evelyn Mary Radford. It was erected soon after her death in 1887. She is also commemorated in the small lancet window near the main door.

The stained glass in the south wall dates from the latter years of the First World War. One window reminds us of the fragile hold on life of many nineteenth century children, including Barbara Lucy Radford, who died aged eighteen months. The appropriate picture is accompanied by the text ‘Suffer little children to come to me.’ Another was placed there ‘to beautify the House of God’ and is in memory of Francis Poole Lansdown. The reredos was given in memory of his wife, Sarah Sophia Lansdown. He was a retired surgeon from Clifton, Bristol and married Sarah as his second wife in 1898. The ceremony took place at St. Petroc’s. Both are buried at Lydford. Her maiden name was Fuller. Was she a descendent of Revd. Morris Fuller who built what is now Bayfield House, I wonder? Incidentally the west window was originally given to Princetown church in memory of Revd.Fuller’s mother.

In the north wall are two windows in memory of Lydford stalwarts who died within a couple days of each other in 1936. The first was Agnes Thorpe, sister, housekeeper and companion of the Rector, George. They had served the parish of St. Petroc’s for over thirty years by the time of her death. Two days later the parish was further saddened by the death of Frederick James Nicholls, benefactor of both the church and the parish, although he actually lived over the border in Brentor parish. I usually sit near this window on Sundays, so get time to reflect on its depiction of Jesus as the Good Shepherd. My eyes are always drawn to Jesus’ left hand holding the crook. Did the artist mean the hand to look like that or is it actually upside down?

To lose two leading members of the congregation in such a short time must have seemed like a hammer blow to the parish, but here we are over seventy years later still carrying on their work. That is a salutary reminder that no-one is indispensible and that there will always be those ready to take up the privilege of proclaiming the Good News of Christ’s death and resurrection, particularly appropriate just after Easter.

Howard Barkell is a Lay Worship Leader at St Petroc's. This article first appeared in the Lydford Parish and Community Magazine, May 2011, and appears here with the author's permission.