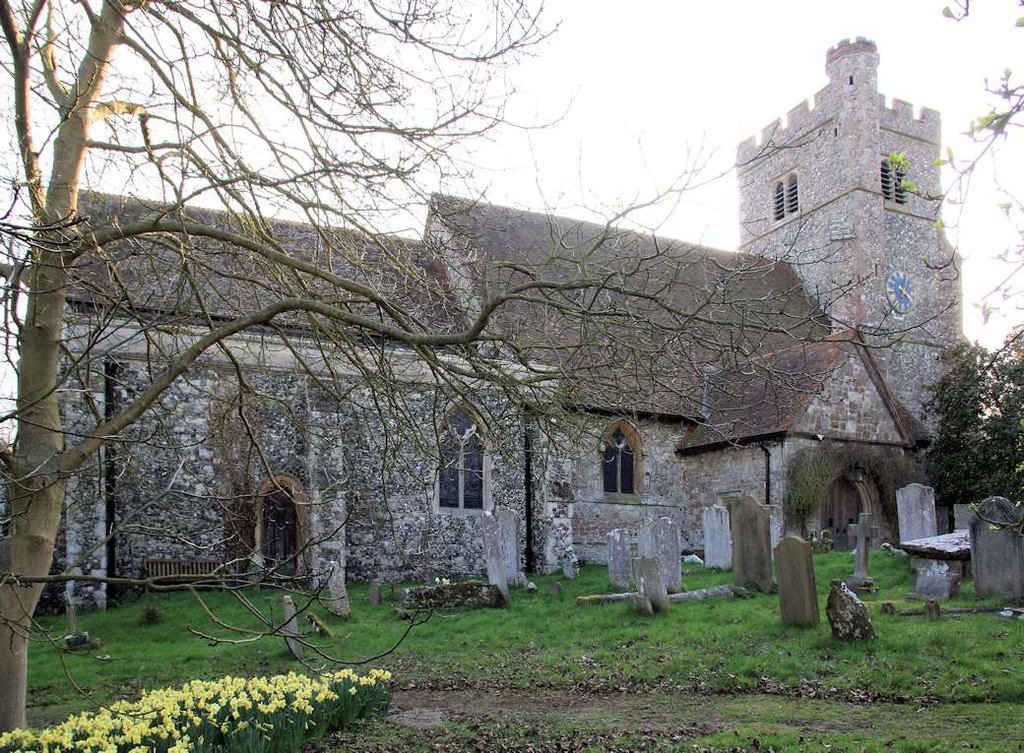 Shorne is an ancient parish which almost certainly came into existence before the Norman Conquest of 1066. The earliest written references to it are in early twelfth century documents, one of which may have been repeating the contents of a pre-conquest document. There is no record of the church being dependent on another so it was probably carved out of the territory of Rochester Cathedral.

As the church has Anglo-Saxon features the parish probably existed in that period, though at first the church may have been a manorial chapel which gradually took on the characteristics of a parish establishing a territory in which tithes were payable to the parish priest. There is some evidence that its area was originally larger and some neighbouring parishes were created from it.

Later history of the parish is in the church guide book which you can read by clicking the link at the foot of this page.

The oldest part of the church is the north wall of the nave which contains an Anglo-Saxon double-splayed clerestory window high up above the arcade. The original church would have consisted only of a nave and short chancel. A Romanesque style arch in the north nave wall is probably Anglo-Saxon and may have been inserted to give access to a porch or porticus (a room on the side of the church).

Glass: All the stained glass is early 20th century except in the window at the W end of the S aisle which is late 19th century. There is fine glass in the E window of 1908. At the W end of the N wall of the N aisle is an interesting window in memory of Adelaide Hallward who died in 1925. It was made by her husband Reginald Hallward who lived in the village.

Font: This is a fine font of the 15th century and has seven carved panels described in the church guide.

Monuments: There are many round the walls and in the floors. The most impressive are the reclining effigy of Sir Henry de Cobham, Lord of Randall Manor, who died in 1315 seen in armour in the Randall Chapel. In the sanctuary is a large memorial to George Page and his son Sir William erected in 1645.

Graffiti: Like may old buildings the church contains medieval and more recent graffiti. A survey was carried out by the Kent Medieval Graffiti Survey. Download a copy of the survey.

The burial registers are in the Medway Archives and can be viewed online.

The parish war memorial is in the churchyard. Ian Craig has written a booklet about the memorial and those named on it: Our Glorious Dead. The booklet includes information about some other war victims. It can be bought in the church for £2.00.

The churchyard contains a number of graves of men who gave their lives in the two world wars four of which are maintained by the Commonwealth War Graves Commission and mentioned on its web site. These are near the south east (far left) corner of the church and their inscriptions read:

Others buried or recorded in the churchyard include George Baker who served in France but died on 10 May 1929 and Arthur Levett who died on 11 June 1943 Arthur Welch (died 29 September 1917) is mentioned on a family gravestone but was buried in Belgium. These are not the only graves of those who died in both World Wars or served in them. Most who died on active service have no known burial or are buried on the continent.

A survey of the memorials up to 1930 both inside and outside the church was carried out in 2013 by David Williams. He also researched some of the burials and the results are in the notes. The transcriptions and notes  can be downloaded from the following links:

Reginald Hallward and his wife. He was an eminent who lived in the village artist and designed the war memorial and made the stained glass window in the N aisle in memory of his wife. See Wikipedia article.