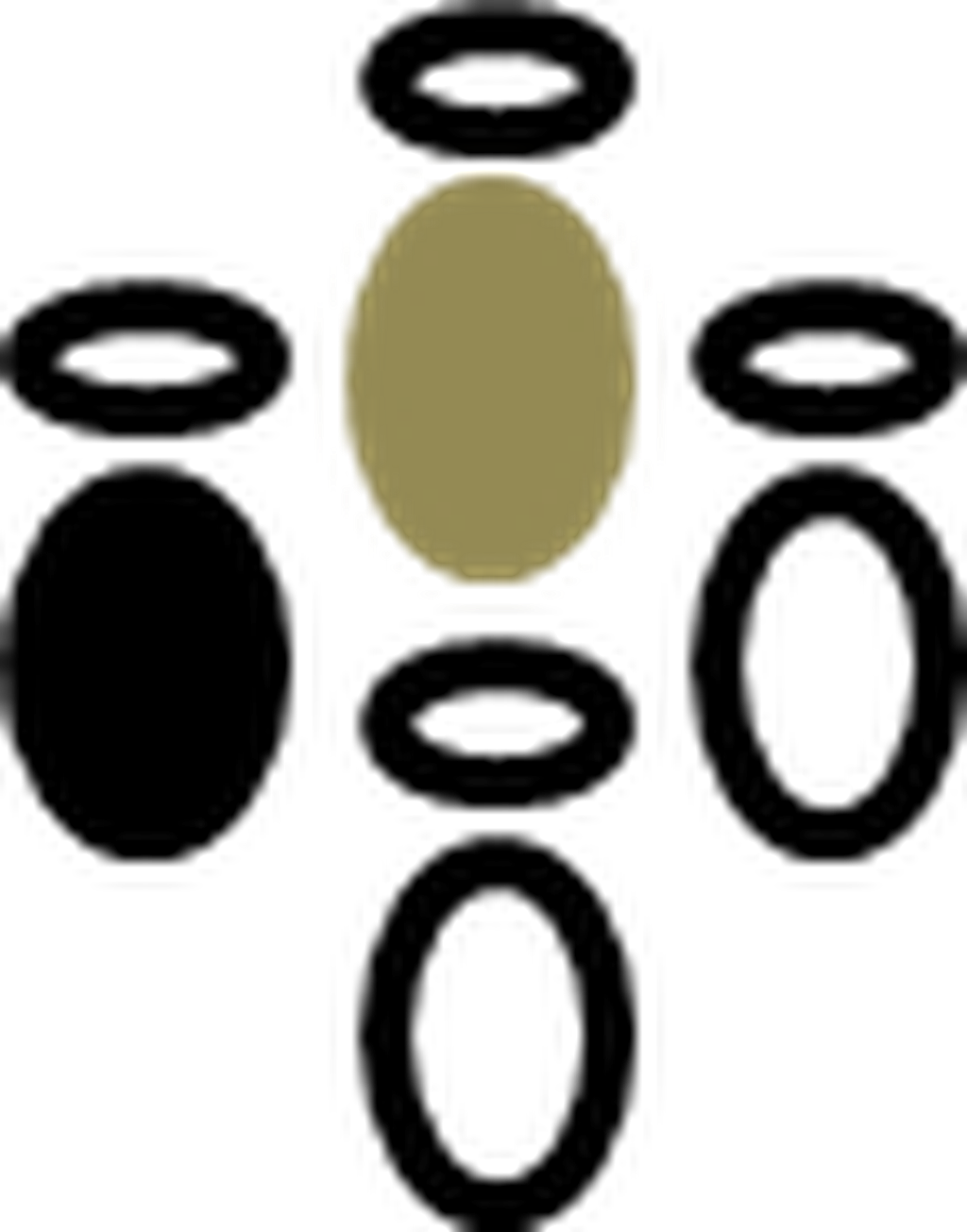 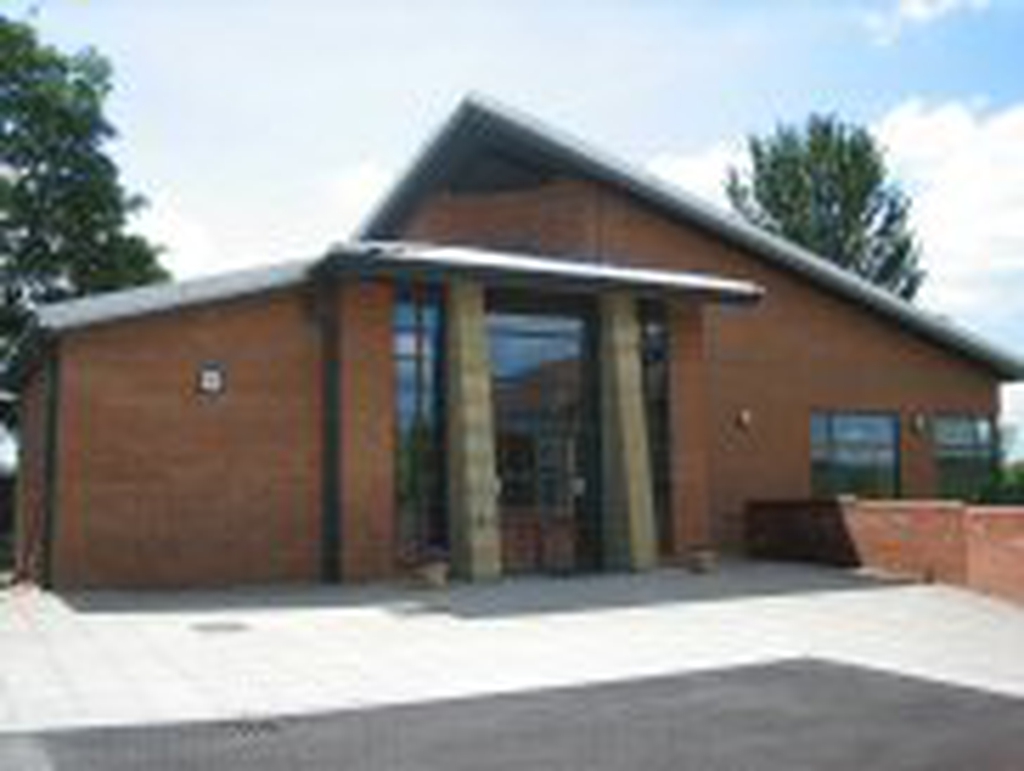 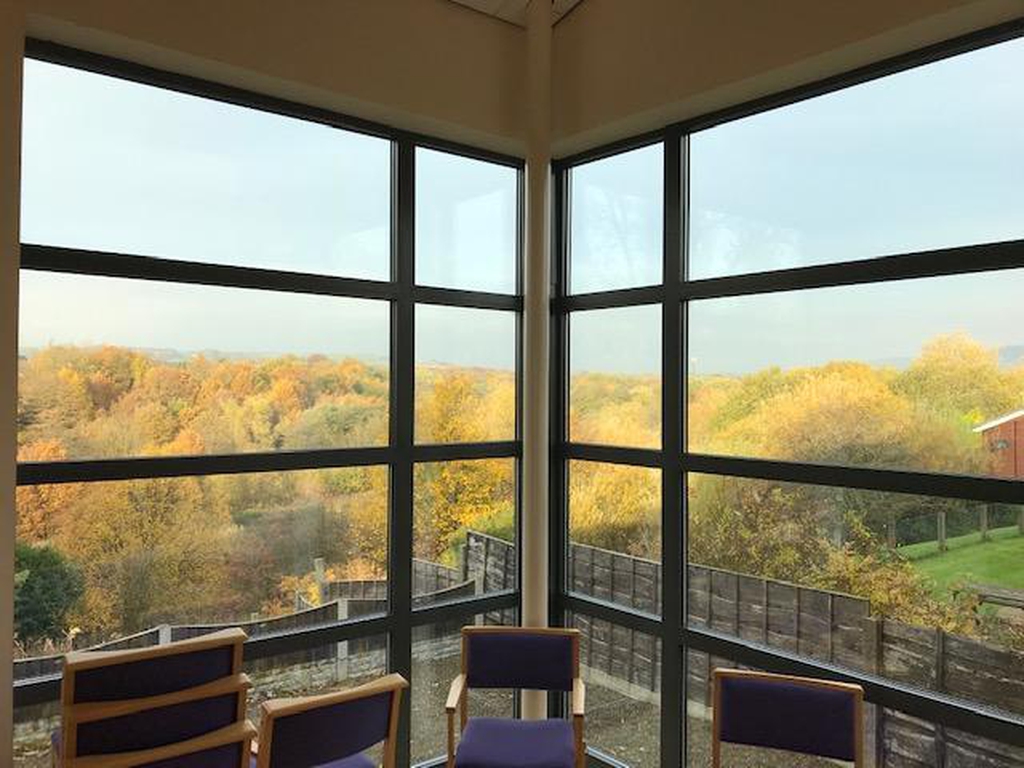 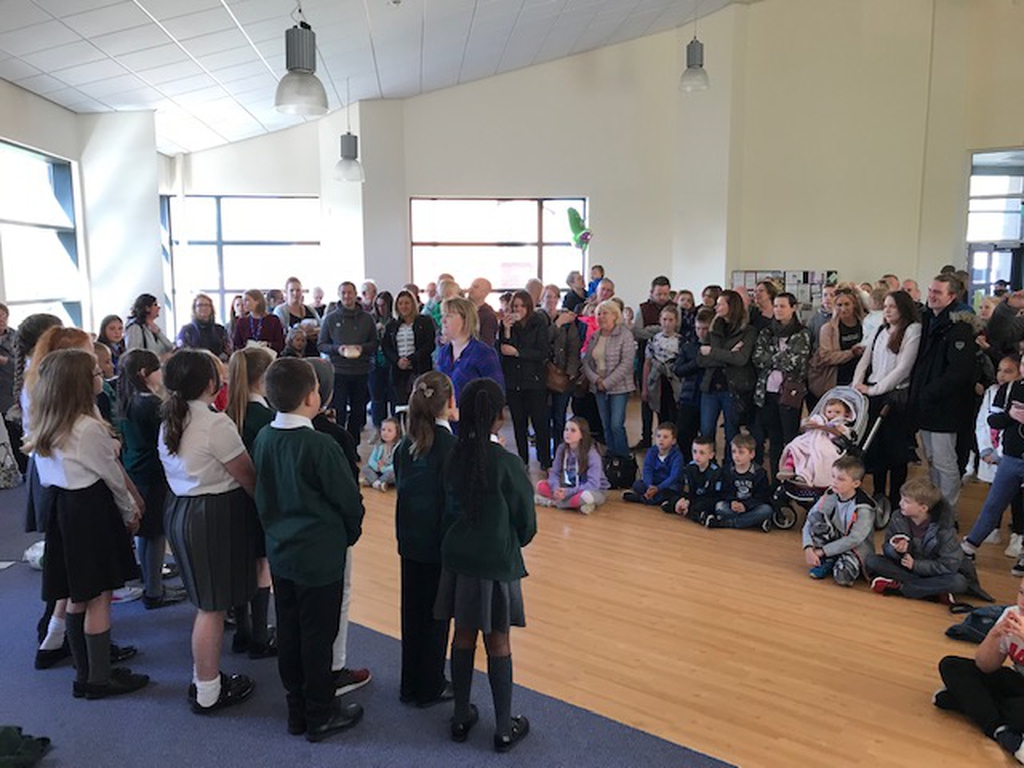 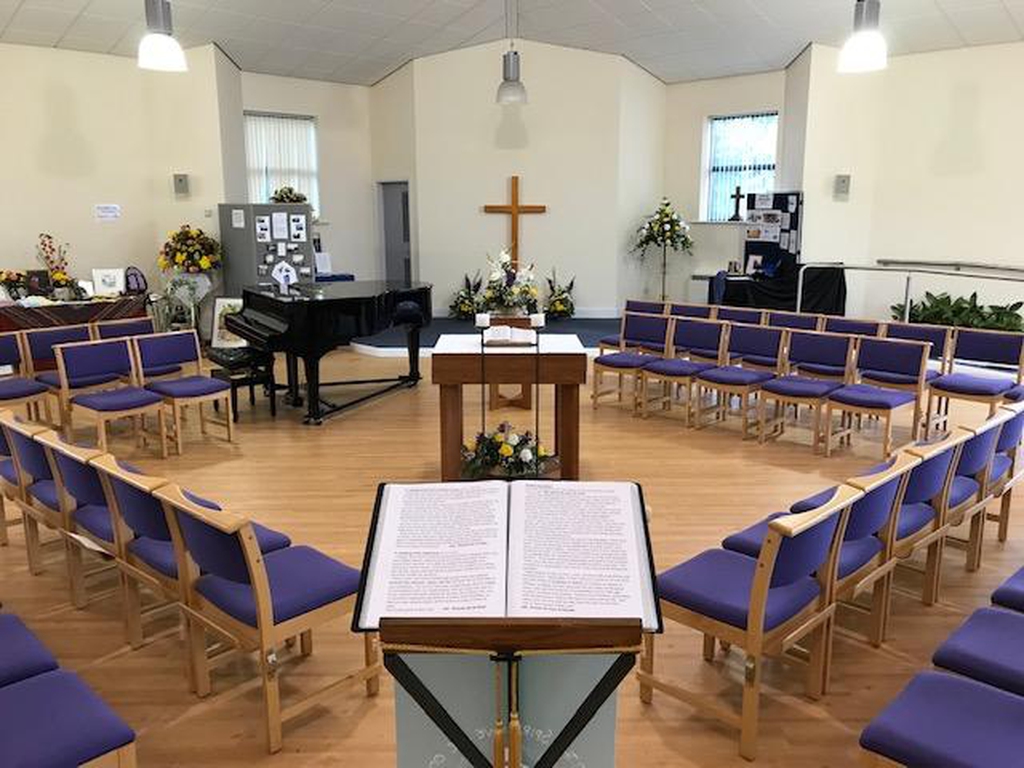 The LORD is my shepherd; therefore can I lack nothing.

2 He makes me lie down in green pastures

and leads me beside still waters.

3 He shall refresh my soul

& guide me in the paths of righteousness

for his name’s sake.

4 Though I walk through the valley

of the shadow of death,

I will fear no evil; for you are with me,

your rod and your staff, they comfort me.

5 You spread a table before me

in the presence of those who trouble me.

You have anointed my head with oil;

and my cup shall be full.

all the days of my life,

and I will dwell in the house of the LORD forever.

And a short reading from the Gospel according to Matthew:

Jesus said to them, ‘But who do you say that I am?’ Simon Peter answered, ‘You are the Messiah, the Son of the living God.’

And Jesus answered him, ‘Blessed are you, Simon son of Jonah…

And I tell you, you are Peter, and on this rock I will build my church…’

Perhaps it was those younger years as a goalkeeper at Monton Amateurs and the YMCA, solid at the back so the rest of the team could push forward? Or the way in the last few years since I knew him, I could guarantee he’d always be ready in his chair at the back of church on a Sunday morning, waiting to greet me with a big grin on his face if City had won and United had lost…

John Ellins was a big man. A big presence in any room, always with a tale to tell and a twinkle in his eye. Kathryn was saying the other day how she always remembers that little wry smile he’d have right in the middle of any blazing argument that used to drive her mad – that cheeky little grin that said, ‘we’re still alright, you know.’ And I’m sure you all, and any one of the many people who’ve known John over the years but can’t be here today, will have your particular touchstones, those special memories, those unique little quirks that were always unmistakeably him!

I remember how you could be chatting to him and mention a place somewhere in the UK, anywhere in the UK, and that grin would creep over his face, and he’d tell you a tale about a time he’d been there – which usually started with him and this other feller having a few beers in a local bar…

We meet today to remember John and to celebrate his life. But we also meet in a strange time, when many of those who would otherwise be here cannot. Dorothy has received messages from all over from those who knew John and would dearly have wanted to be here today – and we particularly mention the thoughts and good wishes of Celia and Malcolm, Jim and Shirley, Bridget and Malcolm, Allan and Jackie, Bernard Smith & Phil Richardson. We are mindful too of those gathering at home to be with us in spirit – including all John’s church family and friends.

There will be another occasion, in due time, when we can celebrate John’s life exactly as he wished, but for now, I hope these words will spark your own memories and reminiscences of this kind, good, big man.

John Ellins was born and grew up in Salford. His father was a Park Supervisor and he lived as a child in a number of the park houses in Salford. An only child, one of his earliest memories was a policeman asking him ‘Shouldn’t you be in school?’ and John being John replying, ‘No. Did you know the King’s just died?’

John was a worker all his life, and it was at work as a packer at Droylsden Shirt Factory that he first met Dorothy. For their first date, he took her to a pub, asking her, ‘What do you want to drink?’ with her replying, ‘What do you sell?’ They were courting two years before they married at Droylsden St Mary’s. They lived first at Swinton, then moved to Little Lever as John’s career developed, then Ramsbottom, and then to Brandlesholme in June 1978.

It was here that they became members of St Francis Church. They’d previously gone to church if there was one local, but now they found somewhere that offered friendship and fellowship of a different kind. From Christmas events to Kathryn attending playschool, then Stephen’s christening, family life became intertwined with the life of the church fellowship. John with Trevor Eastland, Tom Walsh and John Fox soon became a fixture, someone you could depend on – not least for the legendary bonfires, as well as church weekends away camping, BBQs, walks and all sorts. There was also ‘Recall’, the ‘80s supergroup made up of John as singer and kazoo player, with David, Martin and Keith – who even made a tape at one point! The fellowship at St Francis and then All Saints brought friendship and joy for John and Dorothy and the whole family.

At the same time John’s career was going great guns – working as a salesman for Tate and Lyle, John was in his element – a good man and a good worker as one former colleague put it. He travelled all over for work, met many people and, what’s more impressive, maintained the relationships built up with colleagues and their families over the years too.

When John retired aged 62, his interest in plane and train-spotting soon took him in a new direction. He’d always been a spotter – still had his notebook next to his chair at home up to his last days. But on retiring, he got involved in the East Lancs Railway, and quickly found himself on the front desk. Which made sense really – that’s where you’d put a salesman with the gift of the gab and willing to talk to anyone! He loved a chat, and he loved what he did at ELR – especially the bank holidays & Christmas for the Santa Specials. Here again he met many people with whom he became friends.

John and Dorothy travelled in retirement too – all around the world, including an amazing half-world cruise, starting in Australia, and via Malaysia, Hong Kong, China, India, and Dubai, made its way through the Suez Canal. They loved these holidays, a far cry from the years of camping – though they loved both in their own ways.

At church, John was heavily involved in the Men’s Group, organising the programme for activities for many years. He loved to be involved in things – and when the new All Saints was being built, John would be there mucking in, helping with the digging of beds and the seeding of the grounds with the other volunteers.

John loved his family very much – he was so proud of Kathryn and Stephen, happily telling anyone who’d listen about what you were up to and how well you were doing. Mind you, he always knew best – Dorothy and Kathryn were remembering the other day how John always knew more about football and cricket than Stephen’s coaches at Westbury FC and Woodbank Cricket Club!

John was stubborn too – he could be rock-like in his refusal to compromise sometimes. But always, as Kathryn said, that little smile would be there.

When his grandson Eddie was born, John was thrilled. He was so excited to meet him, and the photo of the whole family together which now hangs in the front room is a wonderful reminder that John had that chance, that opportunity to spend time with Eddie, which will forever be a happy memory.

But just as John was a rock for his family and for so many others, so in the end Dorothy was his rock, throughout the years of their marriage, and particularly in his last months as she strove to fulfil his wish to stay at home during his illness. No man is an island, and certainly not John. He was who he was because of you. He always said as much about his years travelling – that he couldn’t have done it without you, Dorothy, at home. On John’s behalf, thank you, Dorothy, for everything.

We remember and celebrate John today for all he was, is, and will continue to be. Because John’s story doesn’t end here, although we say a goodbye to him today. John will live on in your lives and memories for as long as you share his stories, think of him sometimes, and hopefully crack a smile.

That’s only right, because he was a good man, a big man, a man you could depend on. Thinking about a bible passage for this service was hard – John wasn’t your particularly religious type. His faith was just there, strong, solid, practical, stubborn even. Like a rock.

Which is why I took those words of Jesus for today – ‘You are Peter, and on this rock I will build my church’. Because if Church & Christian faith means anything in the world today, it’s because it takes people like John, people you can depend on, and builds onto them something much bigger – something which can offer hope & love to the whole world. It starts with people and makes them more together than they would ever be apart from one another. But you need a strong foundation to build anything that will last – a foundation of people like John.

John Ellins had a big heart, a big life, and underneath it all a deep, quiet, solid faith in the love of Jesus. We will miss him, but we give thanks for the privilege and the honour of knowing him. He was a good man, a rock. May he rest in peace and rise again in glory, in the name of the Father, and the Son, and the Holy Spirit. Amen.

<span style="font-size: 1rem;">God of mercy, Lord of Life, we give you thanks for John,</span>

For the grace and mercy, he received from you,

for the memories unspoken today,

and for all that made him unique & special in your sight.

Thank you for the life he lived, the lives he touched

The love he gave and received with family and friends.

Thank you that no human life is ever lived in vain,

And that John is now beyond the reach

of any sickness or pain or despair,

But not beyond the touch of your care and love.

God our Father, you are tender towards your children

And your love is everlasting.

all John’s many friends & associates over the years,

and all those who knew, loved & cared for him.

Give each of us wisdom and grace to use well

the time that is given to us here on this earth

to turn to Christ and to follow in his footsteps

in the way that leads to everlasting life. Amen.

A Prayer of St Francis

Lord, make me an instrument of your peace.

Where there is hatred, let me sow love;

where there is injury, pardon;

where there is doubt, faith;

where there is despair, hope;

where there is darkness, light;

where there is sadness, joy.

grant that I may not so much seek to be consoled, as to console;

to be understood, as to understand;

to be loved, as to love with all my soul.

For it is in giving that we receive;

it is in pardoning that we are pardoned;

and it is in dying that we are born to eternal life. Amen.

With love and prayers for Dorothy and the family – and their thanks to all who have been in touch over these last few weeks.
Thank you for your support.