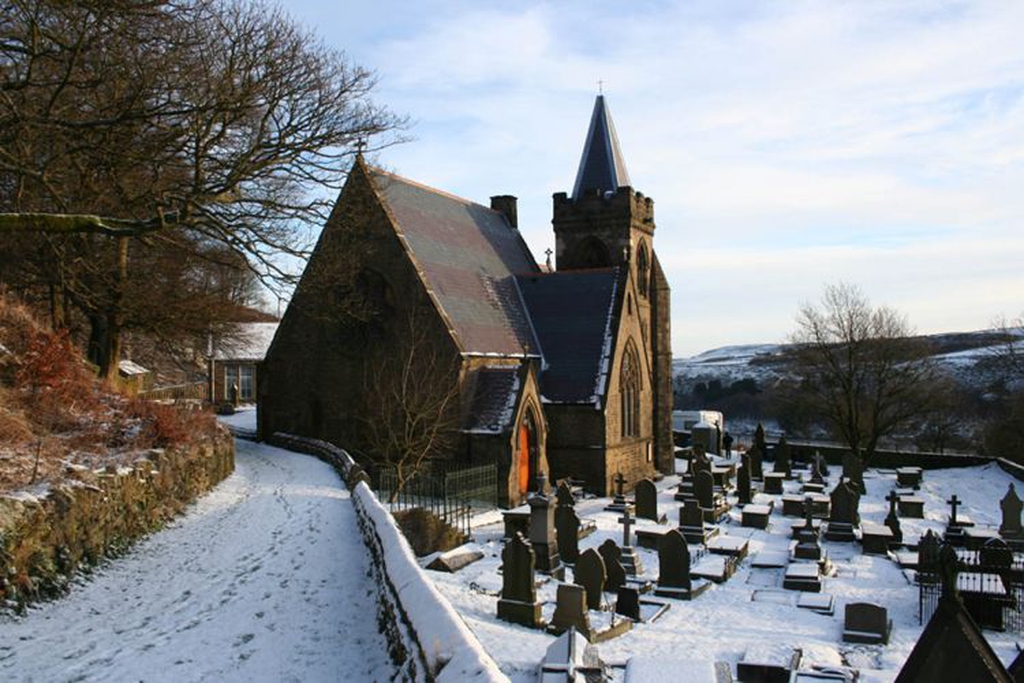 The site has been a place of worship since 1615. According to records this is the 3rd building. The ravages of the Pennine weather took its toll on the first two and the present church was built in 1865.  As with the previous buildings this one suffered over many years because of the weather.  A small group of dedicated parishioners kept the Church thriving and the Church School next door was still in use when the M62 project started.  The geologists for the contractors in their wisdom suggested that the church and school would become vulnerable and the foundations undermined once the dam was full. The result was that the school was closed in 1970 and a notice put on the Church door that anyone entering did so at their own risk. The Church still stands and the school is now a private house.

Fundraising was started in the late 1990's to replace the roof which was in a sorry state.  A large grant was obtained from English Heritage, backed up by a few smaller grants from other charities.  With the enthusiastic help of the community, friends and family from far and wide, those who had been to Deanhead School and Church over the years, the final sum of nearly 180,000 pounds was raised and the roof was replaced in 2002.  The church was now watertight in ternal decoration was completed.  With the help of further grants and fundraising events there are new doors and our organ was totally restored, rebuilt and re-sited at a cost of 63,000 pounds in 2008.  In 2015 the Anniversary Service was led by the church building was 150 years old and we also celebrated 400 years of worship on the site.  The Most Reverend Dr John Sentamu led our Anniversary Service and blessed a commemorative stone that stand adjacent to the Grage II listed pillars at the entrance to the churchyard.

If you are new to the valley, visiting for a short stay or even have lived here for a while and wonder which Church to visit, then please give us a try - for you can be assured that the welcome will be truly friendly.  In keeping with the tradition of Deanhead, our services are from The Book of Common Prayer and we use the King James Bible.