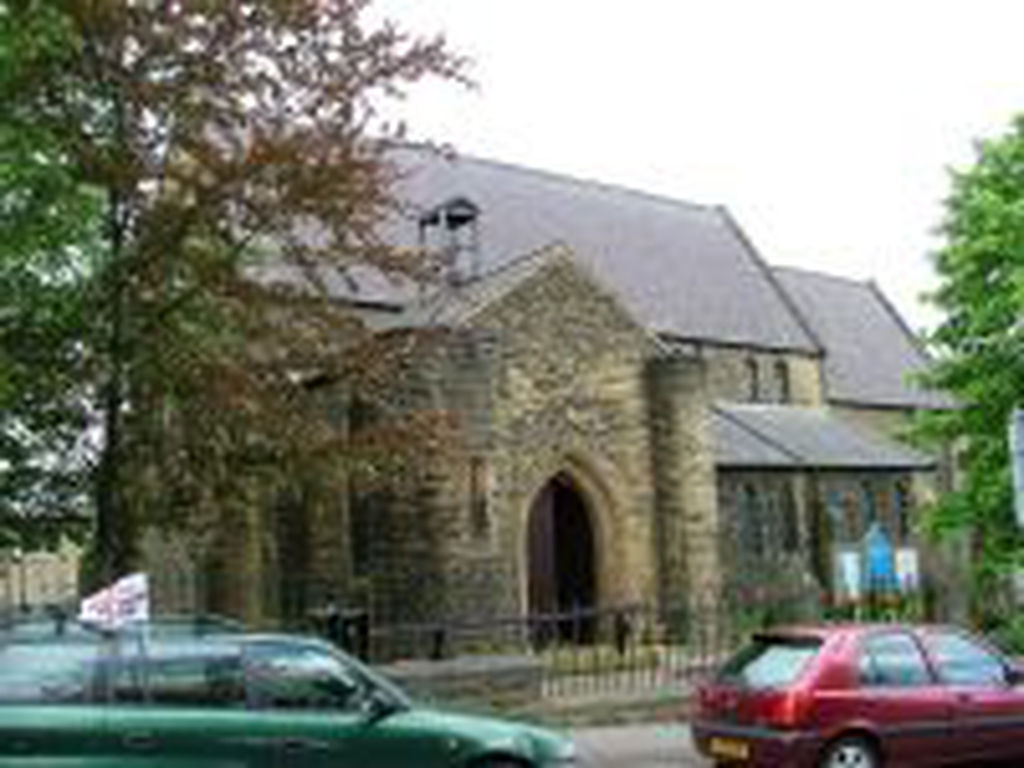 St John the Evangelist, Carlinghow
Services and events
News and notices
About us
A Tour of the Church
Christenings (Baptisms) and Weddings
Our Mission
Find us
Ealand Road Batley Leeds
Get in touch
(01924) 656 454
Facilities
More information
Edit this Church

A Tour of the Church

THE parish of St John Carlinghow was carved out of that of St Saviour Brownhill in 1879, which had in turn been taken from Batley parish church in 1871. The new church, built on land given by the Earl of Wilton, was designed by the local architects Walter Hanstock and Michael Sheard. It cost £2500. The church, however, was never finished. An old engraving of the church by the architects shows that it was originally intended to have a lofty tower and broach spire, but in the event only the base of the tower was ever built. This now serves as the south porch and main entrance to the building. The church was consecrated on the 13th November 1879. The general style of the building is mid-to-late 13th century. It consists of a nave of four bays and a clerestory, with north and south aisles and a three bayed un-aisled chancel, with vestries and an organ chamber to the north. When it was built, it was very simple, without carvings. St John’s was never a large church, and since 2000 the worshipping area has been further reduced to the two eastern bays of the nave, with the new parish centre being formed at the west end.

The well-proportioned exterior of the church has been enhanced by the landscaping of the old churchyard to make an attractive Garden of Remembrance. The style of the building is simple, most of the windows being single arched lights, the only exception being the three light east window. Next to the church, to the north, is the old Sunday School building, which is now Dale House School.

There are, unusually, three War memorial plaques in St John’s. The Parish First World War memorial Tablet was unveiled on Sunday, April 17th, 1921 by Major Critchley. Next to it is the memorial to the fallen of the Second World War. These are now to be found in the vestibule, underneath the Carlinghow Working Men’s Club Memorial.

This fine painted panel came from the former Carlinghow Working Men’s Club, and commemorates members who died in the war. When the club was to be demolished, the memorial was in danger of being discarded, until it was rescued and re-sited in St John’s, by the door, above the parish War Memorials.

As a millennium project, the two west bays of St John’s were converted into a new hall for the parish. Part of this was financed by selling the old Sunday School, next to the church, which is now a private school. The conversion job is a testament to the resourcefulness of the congregation, which managed to enlist the help of many who might have had little or no connections with the church, but who in the event gave both  time  and  resources.  The  result  is  a  real   community building which is both loved and used by the community it stands to serve.

Entering the main church, there is a real sense of warmth and intimacy. There is evidence Of unfinished work in the blocks of stone that were left un-carved.

The original intention had been to build a Lady Chapel as a memorial to The Rev John Sykes Walker, sometime Vicar, but at a meeting of the Memorial Committee on 25 February 1952, it was decided to abandon the £400 scheme for a chapel as too expensive. The committee voted instead to recommend to the parish placing 14 stations of the cross in the walls of the church, at a cost of £250.

These were carved by the well-known Italian carver, Ferdinando Stuflesser, of Bolzano. The figures are not in bas-relief but are fully rounded and delicately coloured. The Annual Meeting of the Parish in March 1952 approved the Committee’s recommendation and an appeal for funds was launched. By August 1952, £220 had been raised.

The fine lectern in iron and brass was presented by the family of the Revd C. H. Maggs. It is very much in the style of the Arts and Crafts Movement.

The Book of Remembrance along with its case were given in memory of Tom Brook by his wife and Son.

These are very unusual and were given by his wife in memory of Fred Jessop, who was Church Warden form 1929-1951. There is also a matching verger’s wand.

The 50th Anniversary of St. John's Church took place on the 13th November, 1929 and to mark the occasion it was decided to erect a Rood Beam. The cost was estimated at £100. The Rood was dedicated by the Rural Dean, Canon Wolde, on Christmas Eve 1929. The figures of the Rood are beautifully carved in wood and delicately coloured. Men of the congregation fixed the Rood Beam under the supervision of Mr. Kershaw. A good team of men fixed the heavy solid oak Beam in position and also polished it. Special scaffolding was necessary to fix the Rood.

THE CHANCEL AND SANCTUARY

The sanctuary floor is paved with fine encaustic tiles, after a Minton style. The altar rails were dedicated at the same time as the Rood Beam. They are all of oak and were made by William North and Son of Batley. The altar rails were given by the parish in memory of Edward Scott Rodd, who had been Vicar from 1880-1900.

The Reredos behind the Altar and the panelling around the sanctuary and chancel were dedicated in 1937. Among the artistic decorations on the panelling are designs representing local industry: a Miner’s lamp; a shuttle and a ram’s head for the wool industry; and a square compass for building; an open book for learning; and a scalpel for medicine and science.

The church possesses some interesting old altar frontals, a dark blue one for use in Advent being the finest.

The three lights of the central window above the Altar show the Ascension of the Lord. Jesus is saying to his apostles ‘Men of Galilee why stand ye gazing up into heaven.’ They were given to the glory of God and in loving memory of Edwin and Francis Willans by their children in 1919. The single window to the left contains glass showing St Nicholas, the patron saint of sailors, and it is a War Memorial. The inscription reads, To the glory of God and in memory of those who died for their country. To the right is a window showing St George and is the other half of the war memorial. The inscription continues: and a thank offering for the safe return of those who fought and worked AD 1914—19.

The Lady Chapel was formed in 1979 by removing old pews from the south aisle. It is here that small mid-week Services take place.

In 1924 the Sunday School presented the window behind the Altar, which depicts the Good Shepherd. It shows Jesus with a lamb. To mark the centenary, a new window of Our Lady was presented by Edgar Brook. It is unfortunate that Edgar died before seeing the window. The inscription reads: Remember before God Edgar and Annie Brook the father and mother of George and Marion.

The window is different from the usual type of stained glass window but it is a beautiful addition to the church. Still on the South side of the Church the next two windows, one of St Hugh of Lincoln and the other of St John, are in memory of Charles Hugh Maggs Vicar of the Parish from 1900 to 1923. They were given by the parishioners.

On Sunday, 12th January, 1947 two more stained glass windows on the South side were dedicated. Sydney & Ethel Naylor lost two sons John Lawrence and Kenneth during the Second World War and they presented the windows in their memory. One window is of St. Lawrence and the other of St Patrick. Sadly these can not normally be viewed since the church office now occupies that part of the south Aisle.