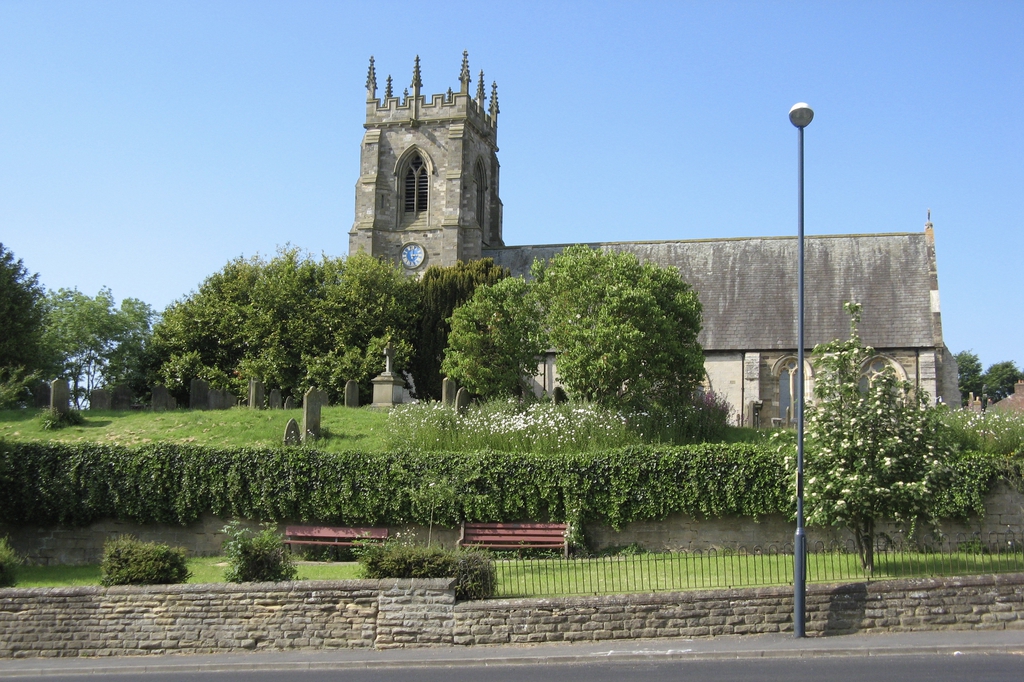 From its dedication and its location in the north of England, the church is believed to have been founded by a disciple of St Columba, such as Aidan, Finian or Colman, during their Conversion of the North, well prior to the Danish invasion of Yorkshire in AD 794. No certain evidence exists of the pre-Conquest building - which may have been destroyed at the hands of the Danes - except possibly a Celtic wheel-head cross in the possession of the modem church thought to have belonged to a (stone?) church built here in late Saxon times.

AD 1067: William Percy, of the family eventually becoming Dukes of Northumberland, received lordship of the manor of Topcliffe. The motte and bailey of an early Percy castle (“soon after AD 1071”, says Pevsner) is clearly visible at Maiden’s Bower, about half a mile from the church, together with a later moated manor platform and its enclosure;

AD 1162: The church was given by the third Baron Percy to St Peter’s Cathedral in York;

AD 1258: a vicarage for a perpetual vicar was established by the Archbishop of York;

In AD 1362, York Minster Fabric Rolls record a church “recently built’, which endorses Pevsner’s “early 14th century” date for the mediaeval church of which a small portion exists today. Certainly, the style of the remaining mediaeval stonework is decorated

By the mid-eighteenth century, the church was much decayed, and a Buckley watercolour of about AD 1805 donated “ad successoribus” by the Rev Dr Waddilove, the vicar at the time and later Dean of Ripon, shows the tower having been enormously buttressed to the west, being, in the words of a contemporary Churchwardens’ report:

“in a very shatter ‘d and ruinous condition; partickerlerly, up as high as the second floor it being much Bulg’d and Crack ‘d.. so that when the bells are rung.. one may discover the.. whole steeple to spring and play very much.“

The north aisle also had to be heavily buttressed. Repairs instigated in AD 1755 continued until AD 1855, when the Vicar, the Revd Henry Hawkins, pulled down and rebuilt the entire church and tower, with the exception of the east and south walls of the chancel. The architect for Mr Hawkins was G T Andrews, who worked also for “Railway King” George Hudson, then living in the nearby Palladian mansion, Newby Park.

If you would like to know more, the Topcliffe Millennium Book is a valuable source of history and information about Topcliffe. The Topcliffe Village website has excellent links to St Columba's Church and Mary Watson's History of Topcliffe.