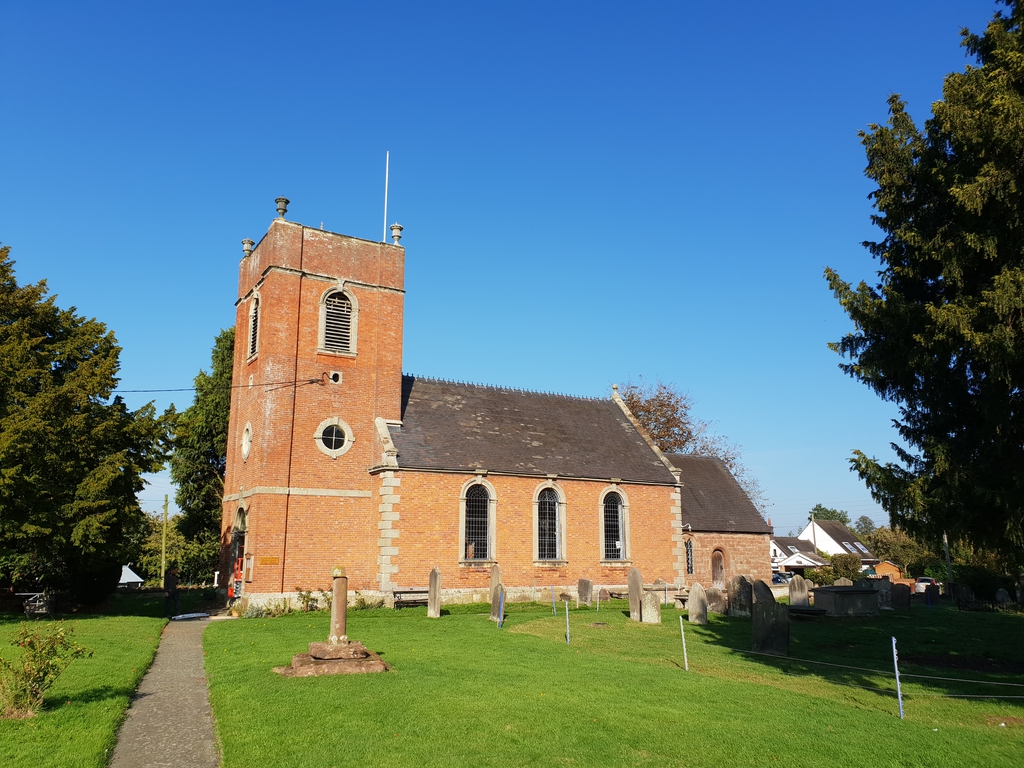 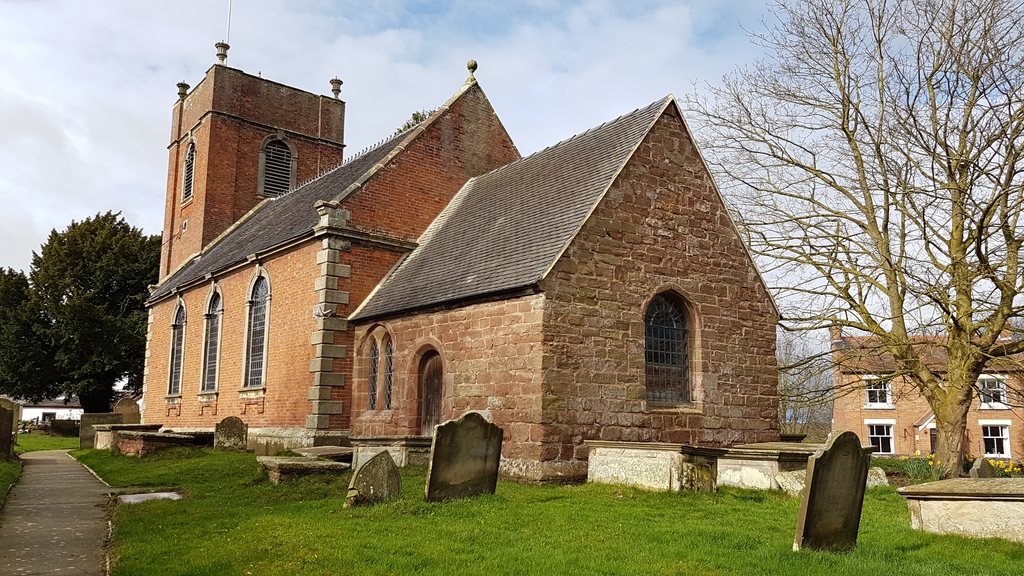 Great Bolas is a parish and small rural village in Shropshire seven miles west by north of the town of Wellington.

It is known that there was a church in Great Bolas as early as the 13th century when, form the early registry transcribed by Rev W.G. D. Fletcher, the incumbent was *1306, Nov 10th, Alan de Newton, custodian. Today, no part of the mediaeval building remains, except possibly two stones in the arch of the east window, behind the altar.

The present church consists of chancel, nave and western tower with two bells. The chancel is about forty years earlier in date than the nave. It is of stone, and is a mixture of classic and debased gothic style. It was built in 1690 by Mr John Tourneor, who was rector of Bolas for 32 years, and who died on 18th January 1693.

This is recorded in the Register, which states that he was buried under the Communion Table in ‘This Chancell which hee unconstrainedly and generously erected on his sole charges about three years before his death.’

The then nave was taken down in 1726/27. The register states ‘The Old church demolished on ye 10th April 1727. The new nave and tower are built of brick, with stone quoins and dressings. The cost was £331, which was raised mostly by briefs’  (subscriptions and donations).

The design was the work of John Willdigg, who is described as ‘one of the trustees and manager’. The new church was opened on 23rd June 1728.

There is a gallery at the west end with some massive oak pews of the pre-Reformation date.

The Squires pew below the pulpit had a row of balusters around the top. Today these are no longer there.

There is a brass in the chancel, to John Tourneor 1693.

There are mural tablets to Thomas Griffiths 1745 and to John Ogle 1840.

The Royal Arms placed over the chancel arch are of the usual early Georgian type i.e. in the first quarter England and Scotland impaled; in the second quarter France modern, in the third quarter, Ireland; in the fourth quarter the King’s German domains.

The ‘stone flower pots’ were placed on the four corners of the tower on the 21st February 1729. The original ‘stone flower pots’, eroded by weather over the years, have been replace by exact replicas made form polyurethane during the incumbency of the Rev. Peter Eldred Evans about 1966/67, at a cost of £90 and were donated by Mr Alan Smith, resident in Great Bolas at the time.

The Great Bolas parish register dates from 1590. It contains the record of the marriage service of John Jones and Sarah Hoggins on 13th April 1790. This seems commonplace enough, but the John Jones who espoused the village peasant bride was really Henry Cecil and still married, shortly to become the tenth Earl and the first Marquis of Exeter.

In March 2015, a Friends of St Johns Group was set up with the aim of raising funds to help maintain and improve the fabric of the building. At January 2020, we have raised over £20000 and continue to raise funds for the church, through community events which take place at the church.

On 29 June 2016, the PCC was awarded a grant of £58,900 from the Listed Places Of Worship Roof Repair Scheme to help with the repairs needed for the Tower and Nave roofs. The work was completed on 18 Feb 2017, when we replaced the Flemish style windows in the Tower. We also considered installing  drainage around the church, and although approval from Lichfield Diocese was granted, the costs proved to be too expensive. However, we were able to re-decorate the interior of the church, which makes it look much cleaner and brighter.

The Friends Group are now trying to raise funds for the installation of a toilet and tea point. This will cost approximately £67,000. We are looking at a number of grants to raise 50% of this amount from smaller grant-making bodies before we make a much larger application.  We also have some outstanding work from our last Quinquennial in 2015, i.e. the repairs to the brickwork on the tower, nave and chancel, as well as the churchyard wall - the cost of this is in the region of £30,000. Once these improvements and repairs are complete, we hope to encourage more people to visit our church which is now the last remaining community site in Great Bolas, having lost the school, village hall, post office, pub and the smithy!

We have recently received two grants, one from Shropshire Historic Churches Trust for £10,000 and one from the Lumley Trust for £5,000. We currently have applications with the Princes Trust and the National Churches Trust, which we hope to hear from shortly.