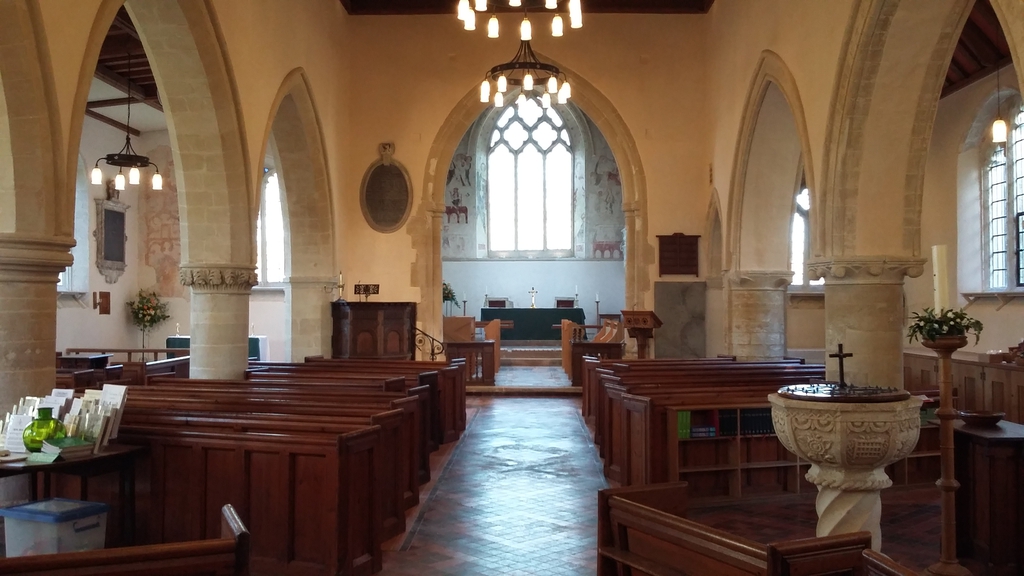 Set in a Churchyard in which a
number of old gravestones face
south instead of eastwards as
customary, St Mary's Chalgrove
reflects a long village life both
interesting and different. Even today
it enjoys a happy relationship with a
flourishing church Pub in the village,
"The Red Lion Inn', which is vested in
the Trustees of the Church Estate.

According to the Domesday Book, in
1087 a priest named Brun served the
parish, but the present Church dates
from the 12th century, begun by
monks from Bec, the important
Benedictine abbey in Normandy.
The 13th century saw a few
developments including the
establishment in the Chancel of a
series of wallpaintings, a national
treasure. Educational and devotional
and in earthen colours, they depict a
Jesse Tree, the life of Jesus, the
Last Judgement and the mediaeval
legend of the assumption of the
Virgin Mary.

The Church, moderately large and
handsome, is thought to remain
substantially as it was in 1500
although some records state that
there was a spire on top of the tower
until it came down in a violent storm
in 1727. The tower contains a single
handed turret clock dated in part from
1699. The interior comprises a wide
nave with two aisles separated by
Transitional Norman arcades with
carved capitals, and a Chancel which
is a fine example of Decorated style.

There are a few wall tablets and
other Memorials including 15th
century brasses. A painted Memorial
to the Quartremaine family is a rare
feature, as is the restored Chalgrove
Friendly Society Banner of 1840
displayed centrally.