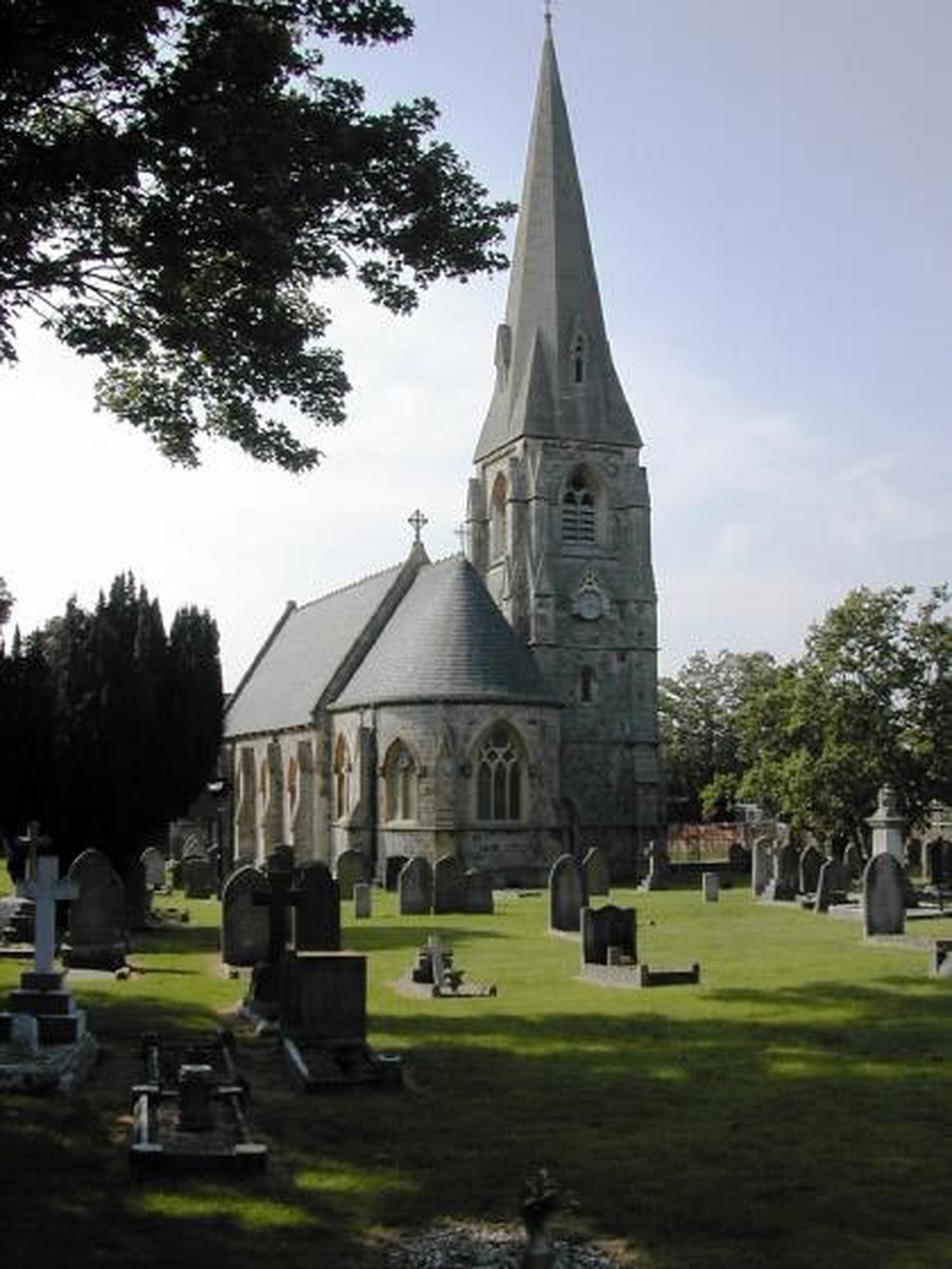 The first evidence of a settlement in Hanworth appears in William the Conqueror's Domesday Survey of 1086. The entry for Hanworth makes no mention of either a priest or a church. One can presume that the village had neither at the time.

The first evidence of a church appears in 1293, when the advowson appeared in the grant of the manor. Adam de Brome, founder of Oriel College, Oxford, was the Rector of Hanworth Church in 1315 and is the first known rector. It was assumed that the church was newly buit and was possibly early fourteenth century. The church survived until 1808 and is the building shown in the late eighteenth century prints.

The church was described by the Rev Daniel Lysons in 1800 as follows:

The parish church dedicated to St. George is a small Gothic structure of flint and stone, consisting of a chancel and nave. At the west end is a low wooden turret.

The church probably never changed over the centuries, resulting in little recorded history. The manorial records record only the name of the rector, as the living was held by the Lord of the Manor. Today, all that survives of the medieval building are some fragments of glass and a few memorials.

In the north transept are two panels of seraphin yellow, some quarters with floral design, and other fragments, all of fifteenth century glass, including the Crosby shield of arms. This belonged to Sir John Crosby, who owned the manor at the time of his death in 1471. A tomb to him and his first wife Agnes can be seen in the Lady Chapel of St. Helen's Church, Bishopsgate. Nearby was their London home Crosby Hall, which had a fine medieval hall. This medieval hall survived and in 1908 was transferred to Cheyne Walk, Chelsea, where it can be seen today.

Nothing is known of the church in the sixteenth century, although the manor during the first half of the century was in crown ownership. Henry VIII presented four rectors to the living between 1519 and 1538. There were two owners of the manor in the latter part of the century. Anne, Duchess of Somerset, later Lady Newdigate, and Sir William Killigrew. Lady Newdigate entertained Queen Elizabeth at Hanworth, who must have attended church there - as earlier in the century King Henry VIII, Anne Boleyn and Lady Katherine Parr had worshipped.

In the north transept, the glass shows the quartered shield of the Killigrew arms, bearing the date 1606. In the medieval church these were situated on the south wall of the nave. Sir William Killigrew's son Robert had four of his five children baptised in St. George's Church. The east window of the chancel contained the royal arms with the initials JR 1625. On the rebuilding of the church in 1808, they were removed and placed in the hall window of the rectory. In 1975 the arms were removed to the Victoria and Albert Museum.

The next owner of the manor to take an interest was Francis, Lord Cottington. His son, Charles was baptised there on 21st July 1628 witnessed by King Charles I, the Duke of Buckingham and the Marchioness of Hamilton. A silver chalice and paten, presented by Lord Cottington are still owned by the church. Lord Cottington was a loyal supporter of the King throughout the Civil War, with the result during Cromwell's interregnum, his estates were given to President Bradshaw. At the Restoration in 1660 the manor was retrieved by his nephew and in 1670 was sold to Sir Thomas Chamber, who owned sugar plantations in Jamaica. On his death in 1692 he was buried in St. George's Church and a monument placed on the south wall of the chancel. This is now on the west wall of the north transept. The parish chest, which is still in the church, dates from the late seventeenth century.

By the eighteenth century, the church was in need of repair and this took place in 1775.

On the outside were many buttresses, put there to prop up the walls. These are visible in the prints of 1790 and 1795. After the repair in 1775, dry rot attacked the floor and damaged the side of the pews.

At that time the chancel and body of the church were paved with brick. The pulpit was of oak and and at the west end was a marble font, inscribed on the base with 'John Shore - Churchwarden 1775'. There was a small vestry room on the north side. Many times during the century, the windows were damaged by explosions from the Hounslow Gunpowder Mills, situated about two miles away.

The end of the eighteenth century saw the manor owned by Aubrey Vere Beauclerk, who became the fifth Duke of St. Albans in 1786. Several members of his family were baptised and buried in the church. The manor house, once known as Hanworth Palace, was destroyed by fire in 1797. Some books record that St. George's Church also suffered damage in the fire, but this has not been authenticated.

Aubrey, fifth Duke of St. Albans died on 8th February 1802, and was buried in the church on 12th February. His tombstone is on the floor of the chancel.

On 22nd September 1807, the parishoners met and agreed a resolution to repair the church. At the vestry meeting held the following week three resolutions were passed:-

It is deemed expedient to take down the present church and upon the said site to build, with the old materials, as far as they will go to a new church and chancel, not exceeding sixty feet in length and that a convenient Vestry Room be added at the east end.

That the cost thereof shall be defrayed by an annuity or otherwise.

That the Rev J Burgess, Rector, be requested to undertake the entire direction of the said structure under the control of J Wyatt, Esq.

The present church with the spire and chancel removed is the church completed in 1812 to a design by James Wyatt, a foremost architect of the period. It was probably one of his last commissions, as he was killed as his carriage overturned near Marlborough, Wiltshire, whilst travelling from Bath to London in September 1813. He is buried at Westminster Abbey and his family is buried in the Churchyard at St George's. Their monument is an Egyptian xxxx - a sign of immortality.

Wyatt owned Hanworth Farm, which he used as his country home. This was situated close to the site of the South West Middlesex Crematorium in Hounslow Road. The farm house was badly gutted by fire in 1806.

When the Prince Regent (King George IV) wanted an architect to restore Windsor Castle and to provide him with sumptious new rooms for entertaining, he chose Wyatt - often known as Wyattville. The Windsor Castle we see today is the result of that commission. The Duke of St Albans, who resided at Hanworth Palace (next to St George's Church), must have been acquainted with Wyatt and the Prince Regent's circle, because he chose Wyatt to rebuild St George's Church, Hanworth Park, after the fire in 1797 that destroyed Hanworth Palace. The rebuilding of the church cost £5000.

There is a watercolour of the interior as finished by Wyatt, which shows a classical Georgian arrangement of the Chancel and, more importantly, much of the ancient stained glass, before it was damaged. Little of his work on the church remains.

There are still fragments of glass from windows fitted between 1812 and 1866. One to Philamon Pownall Bastard, Rector 1818-1846, and another to Thomas Sunkins of Hanworth, who died in July 1863. Algernon Perkins was appointed a churchwarden in 1858. He was the son of Henry Perkins, who purchased Hanworth Park House and estate in 1840. Henry died in 1855, leaving the house and estate to Algernon.

A Vestry Meeting held on 22 January 1864 agreed to the making of certain alterations and additions to the church, to plans produced by Algernon Perkins, who proposed to carry them out at his own expense. This included the addition of the chancel and spire to designs by SS Teulon. This work would seem to have been carried out during 1865.

Most changes to the church since the 1865 additions have been in the memory of rectors and parishioners. Today one enters the churchyard through the Lynch Gate, built in 1882 to the memory of L E C, mother of the Rev John Lyndhurst Winslow's wife. It is said to be a copy of one in Beddington, Surrey. As you walk up the path to the entrance by the south porch, the newer stone of the chancel and spire is seen first, contrasting with the older stone of the nave walls. The south wall contains some medieval limestone slabs. Over each window is a drip stone to give protection from the rain, with a corbel head at each end.