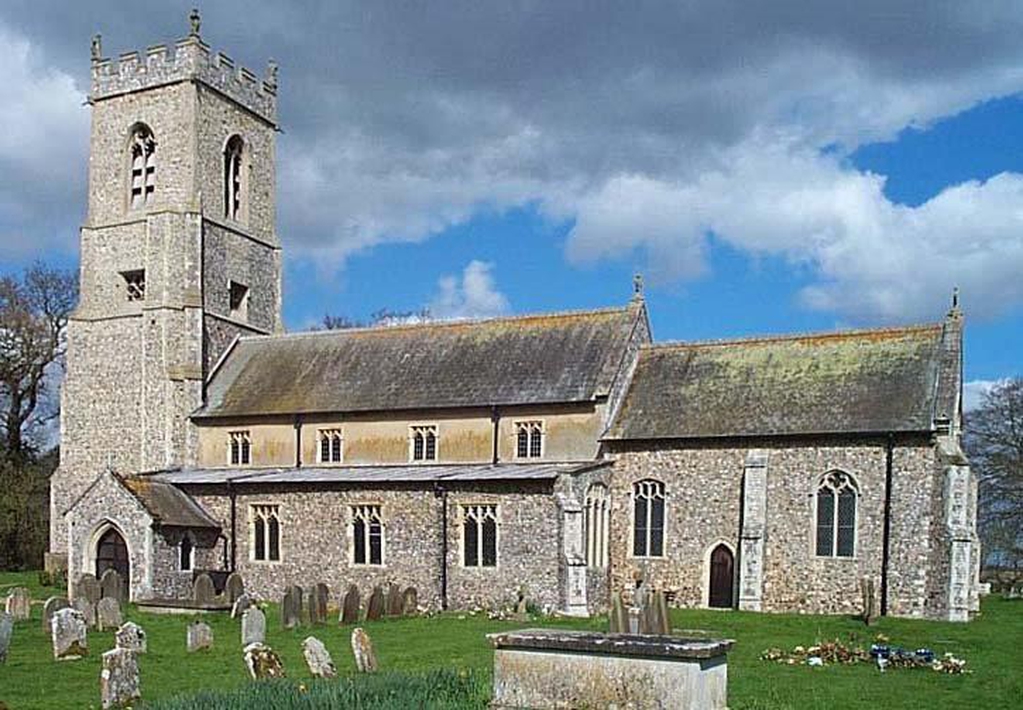 St Benets is open to visitors every day from 9am to 5pm.  Self service coffee, tea and biscuits are available in a small kitchen area at the back of the nave.  There are also toilet facilities at the foot of the belltower.

A fine old Norfolk church by the Broads.

Horning is an old settlement and was mentioned in the Doomsday Book when it was called Horningham. The original village was mainly seated on the higher ground where the River Bure takes a right hand bend towards the south. Although the church is situated some way from the centre of the village, it is in fact in the centre of the Parish. It seems that when it was built it was the centre point of a group of parishes. There are close connections with St. Benet’s Abbey which is also situated in Horning Parish, although on the other side of the present course of the River Ant. The early route to it passed close to the church and down to the Abbey via the Hospital of St. James (which is now part of a farm).

The church is in the Manor of Horning and belonged to St. Benet’s Abbey.( Benet is an abbreviation of Benedict ) In 1536 the Abbot was made Bishop of Norwich by Henry VIII and it was the only abbey in the land not to be suppressed. To this day the Bishop of Norwich is the Bishop/Abbot and Patron of this church and the vicar of Horning its Prior. Only a gatehouse, traces of building foundations and fishponds remain. The Abbot holds a service here on the first Sunday in August.

The building of Horning church was started in c.1220 on what is believed to be the site of a previous church. The earliest parts of the building are the Priest’s Door in the chancel and the pillars in the wall on the north side of the nave. The tower, which is 25 metres tall, was not built until c. 1350, but the four evangelists on the top corners were a comparatively recent addition, being added in the 1880s.

Originally the church had a north and south aisle, but by 1721 the lead roof was in such a bad state that some of the bells had to be sold to pay for the repairs. During these repairs it was found that the timbers needed replacing, requiring further funds. Finally in 1749 the north aisle was sold and the proceeds were used towards repairing the rest of the church. On the outside of this wall different materials were used to fill in the archways and were covered with a cream wash. In 1874 further repairs were carried out and the building was re-roofed in slate and repairs made to the east window.

The church consists of a south porch, a nave with a centre aisle, a side chapel, chancel with choir stalls, vestry, a west tower containing just one bell and a choir vestry. The round pillars that once supported the arches leading to the north aisle date from the early 13th century. The pillars supporting the arches leading to the existing south aisle are octagonal and date from the early 14th century. All the pews on the centre aisle have poppy head bench ends, which are hand carved and are all different. The choir stalls also have interesting carvings. The steps and railing before the Holy Table enclose the Sanctuary. In the left wall is a squint and behind this is the vestry that was probably once a small chapel.

The East Window was replaced during restoration work in 1874 at the same time as the roof was rebuilt. To the left of the window is the illuminated text of the Lord’s Prayer and the Creed, and to the right the Ten Commandments.

In the wall to the right of the Holy Table is the piscine with its shallow basin and drain hole. The carved tracery above it is nearly intact.

There is a Priest’s door on the right and this is thought to date back to the 13th century and is noted for the dog-toothed pattern in the arch.

There is a footpath from the churchyard to the nearby staithe where boats can be moored when visiting the church.

There is a monthly magazine, Horning Reach, which is distributed to all parishioners in Horning and Ashmanhaugh as well as various shops, pubs and boatyards.  It is also held as a .pdf on this site and is also available on the Horning facebook sites.