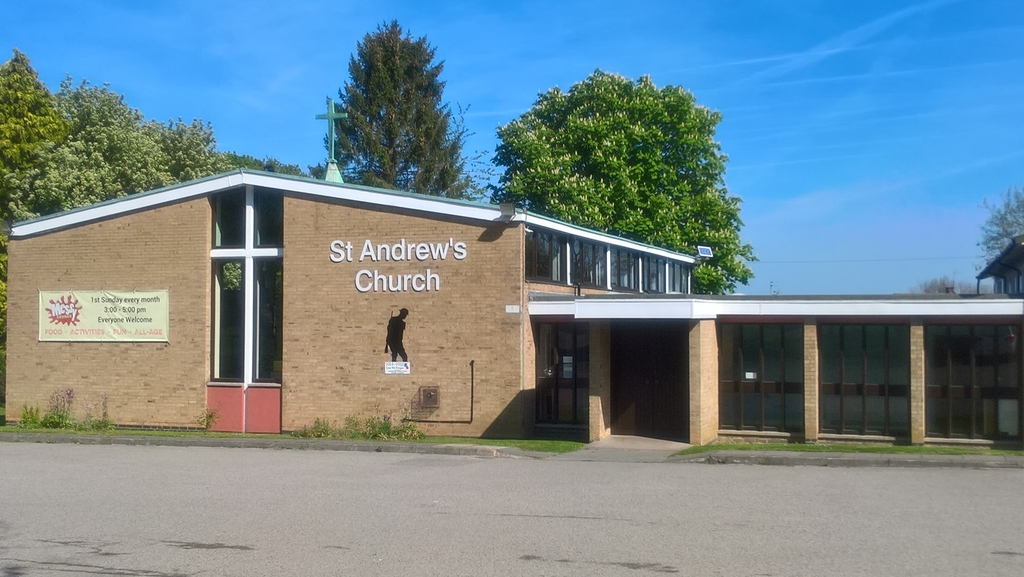 A member of the Meridian Cross Group

St. Andrew's is an ecumenical partnership formed between the Anglican and Methodist churches, being a member church of the Anglican Deanery of Sparkenhoe East and the Leicester West Methodist Circuit. The church building is a large modern construction consisting of a church, an adjoining church hall, and a number of other rooms.

The main body of the church is a congregation of approximately 50 who worship as a single united Christian family.

The main Sunday service is held at 11am and is lead by a mix of Anglican and Methodist worship leaders. Holy Communion is celebrated at least twice monthly, usually on the second, fourth and fifth Sundays of each month. The first Sunday of each month is 'Worship & Praise' and aims to be less formal in its style of worship. Songs and computer presentations are often projected onto a new screen. We gather for refreshments and fellowship before the service.

'Messy Church' meets monthly on the first Sunday of each month between 3pm and 5pm and regularly attracts a families who enjoy a wide range of activities before gathering to worship and share a meal together.

The parish is served by an Anglican Rector, Revd Dave Hover, and the Methodist Minister, Revd Novette Headley. Novette is also the Methodist Circuit Superintendent and has responsibilities for the nearby Methodist Holy Trinity church.  Dave is also Rector of neighbouring St. Crispin's, Braunstone Town with Thorpe Astley, with whom we work in partnership as part of the Meridian Cross Group. Services are also supported by our Lay Pioneer Minister Peter Kitchen, and Local Preachers from the Methodist Circuit.

The church hall is widely used by the community, with something going on most hours of the day and evening six days a week. There is no cemetery in LFE but we do have a 'Garden of Rest' in the grounds of the church providing the community with a place where ashes may be buried and loved ones remembered. We also run a Bereavement Support Group who meet monthly.

Following a parish reorganisation in June 2015, Leicester Forest East became its own parish with St. Andrew's as its Parish Church. LFE has become a founder member of the new Meridian Cross Group of churches alongside St. Crispin's of Braunstone Town with Thorpe Astley.

Historically, until the early twentieth century only a few farmers and graziers lived in this part of Leicester Forest, and they used to meet at St. Bartholomew's church in the neighbouring village of Kirby Muxloe. After the First World War many new houses were built in Leicester Forest East (LFE).

A Methodist chapel was opened in 1931 and in 1948 the Kirby Muxloe Parochial Church Council opened a temporary wooden building in LFE both for worship and as a church hall. The parish still dreamed of a permanent church for Leicester Forest East and, after many years of planning and fundraising, this dream became a reality in 1966 with the opening of a large modern church building seating 200.

Throughout this time the Anglican congregation in LFE had been working increasingly closely with the local Methodist congregation and in 1977 a Local Ecumenical Project was formed in LFE. Shortly afterwards the Methodist chapel was sold, and the money used to build a church hall next to St. Andrew's church, with a common vestibule and office. The 'project' is now a permanent Partnership, and the church now functions as a united Christian community.