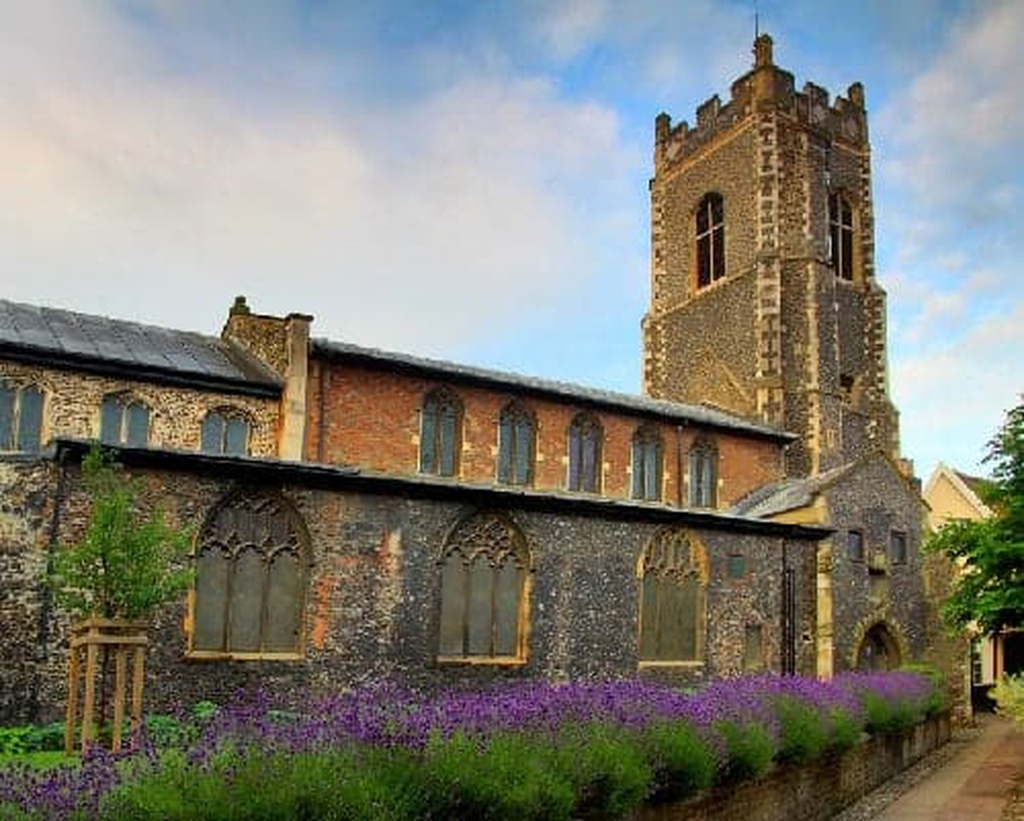 The following is an extract from Nick Groves' excellent guide to St George's. Copies of the full text may be obtained from the Parish Office or by contacting the Parish through this site.

Please do not copy this extract without asking Nick for permission first - this may be obtained via the Parish Office as detailed above.

THE ORIGINS OF ST GEORGE'S

The exact date of foundation is not known, but it is almost certainly later than the cathedral opposite  St George is a late dedication for English churches, not popular until after the first Crusade in 1095. Also, the churchyard encroaches into the open space of Tombland, which had been the late Saxon market-place. The other St George church in the city, St George Colegate, also intrudes into the street pattern round about it.

It is not at all clear why a church was founded here, as a short walk will take you to Sts Simon and Jude, St Peter Hungate, St Michael-at-Plea, St Mary-the-Less, and the now-vanished St Cuthbert, all of which were well-established before St George's came along. St George became important to the city as whole: he became its patron saint, and in 1385 the Gild of St George was founded, which was in effect the City Corporation, until it was dissolved in 1731.

It has nothing to do with graves! The first syllable is from an Old English word, tom, meaning 'empty', so Tombland means 'the empty space'  as it would have to be, to accommodate the market which was here in the late Saxon period. This was situated at the cross-roads of two major routes, but the Cathedral was built on the eastern arm of it.

In all towns where there are several churches with the same dedication, they are differentiated by adding a 'surname'  we have 'Tombland', while the other St George is 'Colegate'  from the street it is in. In the Middle Ages, it was often called St George-at-the-Gates  i.e., at the gates of the monastery.

Nothing survives above-ground of the original church. It was rebuilt in the thirteenth century, as a nave-and-chancel structure  probably with a tower. Not much of this survives, either  see the plan  as the church was enlarged over the years. This was not to accommodate a growing congregation (it is very doubtful if this, or any other medií¦val church, was ever 'full', even on great festivals) but to provide space for an increasingly elaborate liturgy, and for side altars and shrines attached to the cults of various saints.

In the mid-fifteenth century, further work took place. The tower was rebuilt in its present form, taking from 1430 until 1450. It is a style of tower common to several other Norwich churches. At first-storey level are openings miscalled 'soundholes'  they are in fact for ventilation  and these have the shield of St George surrounded by rows of quatrefoils.

The first addition was the north porch, in 1445. Porches played an important part in the medií¦val liturgy: baptisms, weddings and funerals all started here, before moving into the church. It has a simple quadripartite vault. The fact that this was the first addition tells us that the main entrance at that time was from this side  from Tombland Alley.

It would seem that the north aisle was added next  within a very short time. It possibly went only as far as the end of the nave to start with, and was then extended by adding the chancel aisle to it.

About forty years later, the south aisle was built, and then the south porch. This has an elaborate tierceron vault, with carved bosses, the central one showing St George and the dragon. These may well have been carved by the stonemasons who were working at the Cathedral, as their quality is very fine.

The final addition was the clerestoreys to nave and chancel, at some point in the sixteenth century. The nave clerestory is faced in brick, and this has been there almost certainly from the time it was constructed (though the current bricks are nineteenth-century replacements): in the sixteenth century, brick was a high-status building material  it was used for the whole of Hampton Court!

So, St George's presents us with a small city church, which has been gradually added to over the years, and which did not undergo the major sixteenth-century rebuildings of its neighbours, such as St Andrew's.

It is difficult to picture how the medií¦val church looked. The windows were probably filled with coloured glass, and the walls painted with scenes from the Bible and from saint's lives. A rood-screen crossed the chancel arch  and the north aisle, too, as the access to it was up a stair turret on the north wall (now gone, but you can see the scar it left). This explains why the nave columns do not line up  the east respond of the north arcade (the one with the statue of St George on) stands far out from the wall: this was to allow for a door through the fabric above the capital, connecting the two parts of the screen.

The high altar stood at the east end of the chancel, probably surrounded by curtains; above it hung the pyx  a vessel containing the consecrated bread. In the chancel chapel was the Lady chapel, and another altar to St Ann stood in front of the screen, where the current Lady altar stands. The south aisle contained the altar of St Katherine. In addition to these, we know there were statues of the Virgin Mary, St George, St Margaret, St Erasmus, St Nicholas, St Katherine, and the Trinity, all with lights burning before them. In the tower, there was gallery (the door is still there), and in it was the chapel of Our Lady in the Steeple.

We also have the list of goods owned by the church in the fourteenth century. It included four chalices, a censer, several other pieces of plate, and a variety of vestments: one set of red silk; one of red cloth embroidered with gold angels and chalices; one of black-and-green cloth-of-gold with red velvet orphreys; and one set of striped worsted!

THE REFORMATION AND AFTER

As with all other churches, the various religious changes of the sixteenth century had a huge impact on St George's, and most of what you see today inside the church is from the post-Reformation period. The furnishings were gradually removed; the walls painted white; the coloured glass replaced by clear. Any medií¦val seating was replaced by square pews; galleries appeared  the west gallery was extended into the church, and they were also built in the north and south aisles. Colour was not lacking, though: we know that in the eighteenth century the pews were painted white on the outside, and lined with coloured baize on the inside; the altar table had a purple cloth over it; there was a crimson cushion and cloth in the pulpit; and the reredos had the Commandments painted in gold letters on a blue ground.

William Bridge held the curacy of St George's, together with Rectory of St Peter Hungate, from 1631 until 1638, when he was ejected, and excommunicated. He was a leading Puritan divine, and wanted the Church of England to follow the model of the Dissenting churches  abolishing bishops, seeing the clergy not as 'priests' but as 'ministers', and each congregation independent of others. He fled to Rotterdam, where he was minister of the English Church. He returned to England in 1642, and was minister of a double congregation in Norwich and Yarmouth  the Norwich part meeting in St George's. During his time, another gallery was erected  over the communion table  in order to accommodate the crowds who came to hear him preach. With the restoration of the monarchy in 1660, he was again ejected, and the congregation moved to what is now the Old Meeting House in Colegate.

Between 1879 and 1886, the church was totally restored and re-ordered. The square pews were replaced by the current oak benches (the ones in the aisles were made from the old pews). The pulpit was lowered, and moved slightly to the side. The galleries were removed  unfortunately, including the medií¦val tower gallery. The chancel was equipped with sideways benches  and the organ jammed into its current position. These changes were in line with those happening everywhere else, and not one Norwich church remains untouched by them, though St George's is fortunate to have kept its fine reredos: these Classical-style articles were a favourite target of 'restorers'.

In 1895, Walter Crewe was appointed Vicar, and he introduced the Ritualist style of worship that is still followed. He had been a curate at The Church of the Ascension, Lavender Hill, in London, where the ceremony used was based on the 'English' or 'Sarum' use  a revival of the old medií¦val English styles, and Crewe introduced this to St George's. The true principles of this rite were not clearly understood, however, as he also introduced the double gradine and tabernacle, and the six candles  all from contemporary Roman Catholic practice!

Later vicars took the church in this direction, and more and more modern Roman Catholic additions were made  fiddle-back chasubles; the Roman colour sequence; cottas for the servers replaced the more 'Sarum' albes; the service of Benediction became a weekly item.

Today, as with most of the city centre churches, the congregation comes in from outside the parish, as they are attracted by the style of worship. This is based on Common Worship, with the traditional ceremonies. A move back towards the Sarum style has been made, the servers now wearing albes, and during Lent the Lent Array is used  an off-white.
×