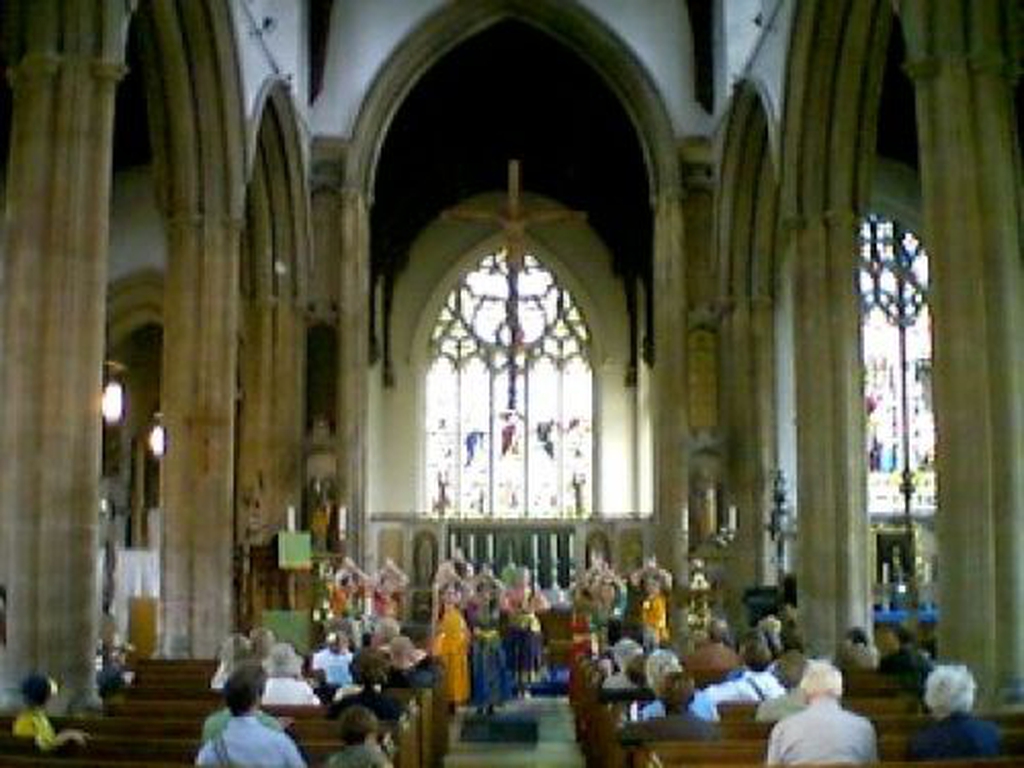 The church was originally founded by a priest called Elwyn and given by him to the monks of Norwich (at the Cathedral?). It was appropriated by Theobald, Archbishop of Canterbury (between 1139 and 1161)  to the monks, at which time it was a Rectory.

The monks settled the church on their infirmary, and no vicarage was endowed. It became a ‘donative’ in the dean and chapter, who appointed a chaplain.

There has been a Church on the site since before the Normans came to Norwich, but there is no trace of that building now. St Giles Church as it stands today has its origins in 1386, when a bequest was given to start the building the church. By 1424, the tower was almost finished, and by 1430 the building was complete enough for funerals to take place. The chancel is more modern and was built during the 19th century.

In 1650, after the Reformation, St Giles had a Rector, Henry Drewry. See this book for more information from page 238 onwards.

When entering the Church you make your way through a very fine porch, which was added about a century after the main Church was built, and which has a noble carved stone façade, a fine fan vaulted roof and a small room above, called a parvise.

The main Church of St Giles consists of a nave with two side aisles, separated by an arcade of five bays. Tall piers of what Pevsner calls “an odd design” of four shafts and many thin mouldings in between, with more towards the nave than towards the aisles, support the high rising arches. The great arches into the chancel and into the tower space correspond to them.

There are three tiers of niches on either side of the chancel arch, one of which holds the statue of St Giles, the patron saint of the Church, removing an arrow from the flesh of an injured deer. St Giles was connected with lepers, and a hospital for lepers was formerly close by beside the gate in the city walls of Norwich, called St. Giles’ Gate.

There are two brass lecterns in the Church, which take the form eagles. One of these is a rare fifteenth century example, the other from the nineteenth century. The Bible is read out from the lectern, and its lessons are explained from the pulpit. St Giles Church also has a number of fine memorials to departed parishioners. (St Giles Street was formerly the street where the doctors of Norwich lived).

The tower of St Giles Church, which is about 35 metres, is best admired from outside the Church, and is strikingly beautiful from many vantage points. It contains a peal of eight bells, three of which date from 1430. The peal is rung every Sunday morning before the 10.30 service and on other occasions, such as weddings. On the top of the tower is the cupola of 1737 which contains the clock bell. This takes the place of the beacon cresset now in the South aisle which dates from the 1497 will of Thomas Colton who was saved from drowning in the nearby marshes by the ringing of St. Giles’ bells leading him to higher ground. He requested that the beacon be lit and he provided a piece of land to pay for the Church’s maintenance.

In the present day, St Giles is part of the Catholic tradition of the Church of England. The Blessed Sacrament is reserved on the high altar, prayers are asked of our Lady and the saints, and the Eucharist is offered, the scriptures are read and the word is preached amidst the sound of bells and the smoke of incense.

It is a tradition that says our first duty and joy as Christians is worship and adoration.