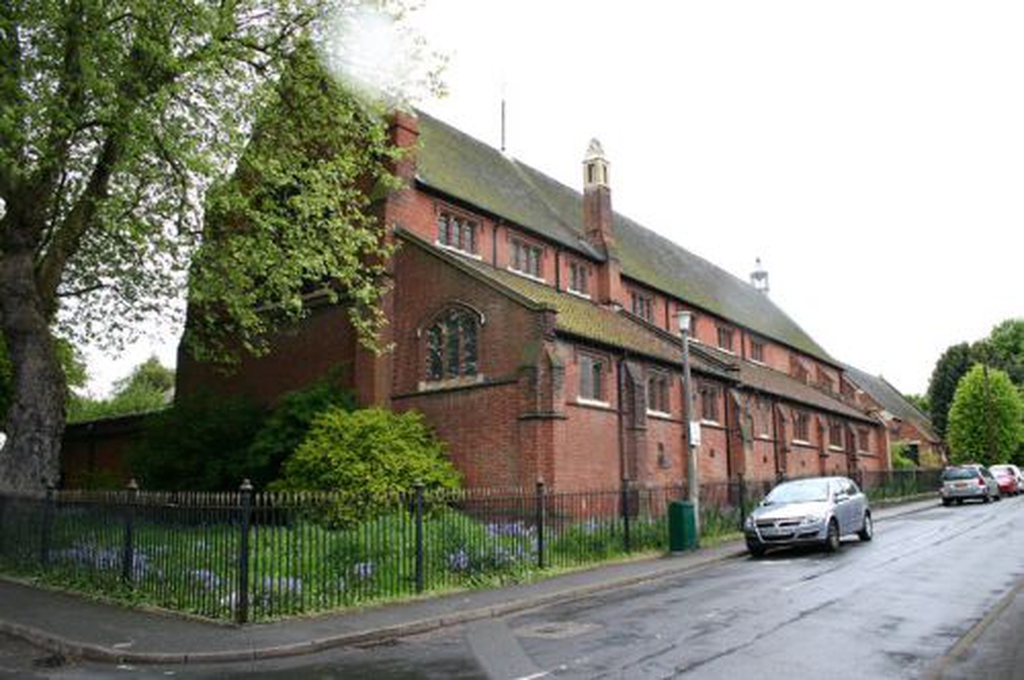 In the beginning, the area forming our parish consisted largely of brickworks....with the land now occupied by the Church marked on a map of 1896 as 'allotment gardens'...not quite The Lord's Vineyard...

1880s During this period, Chatham Dockyard is extended, and new basins are built to help with the increased ship building and repair activity. The workforce expands, resulting in a need for more housing, and many new houses for dockyard 'maties' are built in this area of North Gillingham. Known as New Brompton, the area is at this time part of the parish of St Mark, Canterbury Street.

1889  Rev R Morris, vicar of St Mark's, arranges for services to be held on Sunday and Thursday evenings for the people in this area. These services, conducted by a Lay Reader, Mr John Rogers, are held in a small room at 74 Medway Road (the house was demolished many years ago, and the site is now occupied by flats).  Lay leadership of new mission initiatives is clearly nothing new!

1890 Mr Rogers is joined by Rev Henry Baker, a Mission Priest. Their task is to establish a Mission Church here. From the outset, the Catholic tradition within the Church of England is followed, a practice maintained to this day.

1891 The congregation has now outgrown the small mission room, so larger premises are needed. On 7th June 1891, a large tent (!) is hired for services, and pitched where the present church now stands, at that time open ground. Four months later, the tent blows down, so it's back to the mission room - clearly, a more permanent building is required.

1892 A new Mission Church is dedicated by the Archdeacon of Rochester, and this building (somewhat altered over the years - there is evidence that it must have been laid out so that the altar was at the west end - contrary to the usual practice) is still in use as the church hall. At least two services are held each Sunday, and a choir and Sunday School are established.

1903 By now over 400 children attend the Sunday School, which must have meant having at least two sessions per Sunday. The mission is a success, as far as youngsters are concerned, but one wonders how many of their parents attended church! In April, Rev William Tozer is appointed priest-in-charge, and plans are made to build a permanent church. J E K & J P Cutts are chosen as architects, and the local firm of West Brothers are to be the contractors.

1908 21st March - building begins, attended by John Harmer, Bishop of Rochester. 9th May - the foundation stone is laid, with great ceremony, and this stone can be seen outside today, set into the east wall of the church in Sidney Road.

1909 3rd February - the new church, costing £3,525, is ready for use, though not quite complete (a temporary west wall is erected, and you can still see the join where work was continued after World War 1!). Not a huge amount of money, even by the standards of those days, but the durable materials, and the simple, but practical design, mean that the building has stoutly withstood the test of time.

The church is dedicated to St Luke, and consecrated by the Bishop of Rochester, who celebrates the first service of Holy Communion in the new building.  By this time, the arms race leading up to World War 1 is well under way, as the population of the parish grows....

1919 The east window in the Lady Chapel is given as a thank-offering for peace by the Guild of Willing Workers, following the end of the Great War.  The War Memorial in today's All Souls' Chapel, however, is a chilling reminder of the human cost of this awful conflict.

1926 The west end of the church is completed, but the new architect, W D Caroe, makes some changes to the original Cutts' plans, probably due to the rising ground at that end of the building. The church and the hall (the 1892 mission church) are still not joined, however.

The sanctuary at the east end of the church is re-ordered and beautified by the second vicar, Rev William Lutyens. He calls on the expertise of his famous brother, the architect Sir Edwin Lutyens. The original reredos behind the High Altar is moved, and is adapted to become the memorial to those who died in the Great War. The Blessed Sacrament Chapel is created behind the High Altar (though be it noted that the Sacrament is actually reserved in an aumbry, or wall cupboard, dressed up to resemble a tabernacle). Pictures and images are added to the church at this time, many of which are still to be seen, albeit now sadly in need of cleaning or restoration.

The beautiful stone and herring-bone brick of the chancel floor also dates from Fr Lutyens' time, but, alas, it cannot be said for certain that the design is the work of his brother, Sir Edwin.

1920s-1950s Not much to report, seemingly, as the church cheerfully continues to work in the parish in the 'normal' way.  Fortunately, only a few names appear on the Second World War Memorial (a suitably-inscribed Altar Book), as most of the local working men are in a 'reserved occupation' (i.e. at the Naval Dockyard).

1959 St. Luke's Jubilee year. The church and the hall are joined, and the single-storey enclosed porch is created. However, owing to the lie of the land, it's now necessary to climb up steps to enter the porch, and then to climb down steps to gain access to the church! This extremely awkward layout means that it is very difficult to adapt this end of the church nowadays for other purposes...

1960 A fine wooden statue of St. Luke is commissioned from Oberammergau whilst people from the parish are on a pilgrimage there with their priest, the much-loved Fr Harry Potts.  By the way, the church possesses, and occasionally still uses, a beautiful chalice donated in later years in memory of Fr Potts.

1980s The parish enters a period of major demographic change, as older people move on or pass away. The closure of the Naval Dockyard in 1984 accelerates this process, and the towns of Chatham and Gillingham fall into a decline, which seems never to have been reversed. St Luke's has a series of parish priests who each stay for only a few years, and two of them abandon the Church of England for the Roman Catholic Church.

1997 The pipe organ is sold because of high repair costs, but in its place the All Souls' Chapel is created, incorporating the War Memorials. An electronic organ is installed, later replaced by the present Johannus Opus 4 instrument, now situated in the south aisle.

2007 Following the departure of yet another priest-in-charge, the parish enters a period of great uncertainty, with a tiny, dwindling congregation, and threats of closure. Swift action by the churchwardens and others, together with much prayer, results in something of a minor revival over the next three years, with financial recovery, and slowly growing numbers.

The parish itself continues to change dramatically, however, with increasing numbers of houses being converted into accommodation for students at the nearby Universities, built on the site of former Dockyard premises. Many of these students are foreign nationals of other faiths. Great encouragement is given, however, by the re-establishment of good relations with our Scouts, Cubs, and Beavers groups.

2009 Against all odds, the Centenary of the church is celebrated with a well-attended Mass. On Advent Sunday the restored North Porch is dedicated, and re-opened for use, allowing level access from the street to the church once more.  This is now used as the principal entrance to the church.

2010 After long deliberations, a new non-stipendiary priest-in-charge is licensed and installed on 17th July, so that the parish's work and witness can continue.  Alas, early promises are not fulfilled...

2011 ...and some sadness and disruption is caused yet again by the departure to the Church of Rome of several disaffected former members.....but there's much to be thankful for, as a few new people arrive, and as finances continue to improve. The Sacraments of Holy Baptism and Holy Communion are faithfully celebrated, in accordance with Our Lord's command, prayer is offered daily, the Word of God is preached, and the Gospel message lived out in the lives of our congregation.

2013-2015 These years see some exciting developments! A new pre-school nursery, the King William Nursery, begins to use the hall each weekday, for which purpose the hall gets a fresh coat of paint, as do the toilets, kitchen, and entrance lobby. New storage and office spaces are created.

We establish links with the residents of a new sheltered housing scheme in the parish, Prospect Place, and a monthly Mass is held there for those who can't get out and about easily.

Repairs are done to some flat roofing and gutters, and some walls re-painted in the church and hall. New catering-quality kitchen units are installed, making it easier to prepare food for events and small parties. Meanwhile, a monthly Saturday evening Youth Club/'Crafty Church' is begun, attracting children from the surrounding area who do not normally attend church on Sundays, another positive step forward in our engagement with the local community. The hall itself is hired out with increasing frequency for family parties, and so on - a real community resource.

All these are lay-led initiatives!

2016 Alas, a very sad year, with a number of very serious problems to face, and with several of our older or more reliable members being 'promoted to glory', as the Salvation Army so beautifully puts it...

2017 The priest-in-charge retires in February, so the parish enters yet another interregnum. However, new people continue to join our little congregation, even though some only stay for a short time, such is the transient nature nowadays of much of our parish population.  Never mind - if we simply provide spiritual refreshment for those 'passing through', that's what we're here for!

2018 A Bishop's Mission Order (BMO) is promulgated, with an Associate Lay Minister appointed to set up a 'Fresh Expression of Church' - 'Reach @ Gillingham Pier' - in the new riverside developments, most (but not all) of which are in our parish.

[Sadly, owing to the Covid-19 pandemic, the BMO had to be dissolved with effect from the end of March 2021].

2019 We are having a job to keep up with our energetic new priest-in-charge, so watch this space!  There is an atmosphere of joy and anticipation about the place, as new people join us, and as we continue to proclaim the Kingdom of God - with a Catholic flavour, but that's our USP (Unique Selling Point) - in this corner of the Diocese...

2020 starts so well...until the global Covid-19 pandemic takes over!  Complete closure of the church shortly before Holy Week is followed by a staged re-opening from July onwards, with a daily Mass being restored in October.  Attendance generally is lower than pre-lockdown, but we hope and pray for better times, whilst keeping in touch with as many absentees as possible - and live-streaming Sunday Mass most weeks!